Utilization of a Reduced Graft from a Severely Traumatized Liver: A Case Report and Strategy to Increase Availability of Livers for Transplant

Background: Trauma victims with liver lacerations in the hilum are typically excluded from liver donation. We report a case of a successful liver transplant from a deceased donor with a grade 4 hilar liver laceration.
Case Presentation: We used a liver with a high-grade laceration from a 28-year-old brain-dead traffic accident victim. The liver had grade IV lacerations in the right and caudate lobes. In situ split liver technique was applied to control the lacerations after an intraoperative cholangiogram revealed favourable anatomy. The left hemi-liver graft was procured, retaining the entire vena cava and the full length of the main hepatic vasculature. The recipient was a 62-year-old female patient with end-stage liver disease, with a Model for End-Stage Liver Disease-Sodium score of 19. The left lobe graft was transplanted using the standard piggy-back technique. The patient was discharged on postoperative day 7 after an uneventful recovery. At two-month follow-up, she continues to do well, with normal hepatic function and unremarkable imaging studies.
Conclusion: This is the first reported case of a successful liver transplant of a severely lacerated liver made possible by the application of split liver techniques. In situ splitting of a severely traumatized liver could permit the utilization of a reduced graft for small recipients.

Multiple strategies have been employed to increase the donor pool in liver transplantation. Livers from donation after circulatory death, advanced age donors, and donors with steatohepatitis are all successfully transplanted. Yet traditionally, organs from trauma victims with cross-sectional or imaging exploratory laparotomy that depicts damage to the portal hilum have been excluded from donation [1]. Trauma is a common cause of multiorgan donor death [2]. Multiple concerns exist in using livers that have grade 4 and 5 liver injuries [1]. Chief among these concerns is that damage to the portal and arterial inflow to the liver or hepatic outflow may lead to thrombosis and early graft failure. As such, many centers exclude donors with known grade 4 and 5 liver injuries from consideration for donation. Moreover, limited reports exist of the use of these livers [1, 3-5].

The donor was a 28-year-old female patient who had abdominal and chest trauma, and a severe head injury from a motor vehicle accident. On admission, she had a Glasgow coma scale score of 3. Her systolic blood pressure was 110 mmHg. A computed tomography scan showed a massive intracerebral hemorrhage, a grade IV liver laceration involving segments I, IV, V, VI, and VIII (Figures 1A & 1B), a grade I splenic laceration, and a left pneumo-hemothorax. The donor subsequently was declared brain dead 1 day later, and her family consented to organ donation. The donor’s mean arterial blood pressure was maintained with low doses of norepinephrine. Her liver function test prior to procurement were aspartate aminotransferase level of 32 U/L, alanine aminotransferase level of 214 U/L, total bilirubin of 1.3 mg/dL, and albumin at 3.5 g/dL. 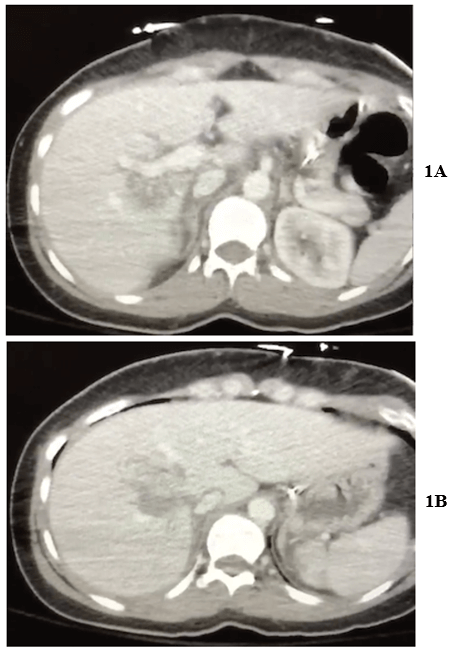 Figure 1: Preoperative contrast-enhanced multidetector abdominal CT showing liver lacerations spreading from around A) right branch of portal system to B) between right and middle hepatic vein. 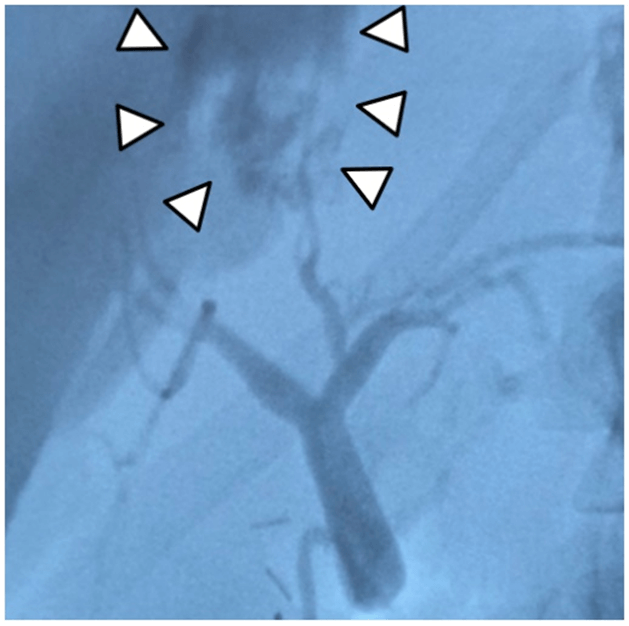 A multiorgan procurement was performed on day 4 of her admission. Multiple liver parenchymal lacerations were observed in the right lobe. Intraoperative liver ultrasound showed a hypoechoic lesion located in segment I and VIII. An intraoperative cholangiogram was also performed following aortic cannulation. It showed a biliary injury and subsequent leak from the caudate branch (Figure 2). The right hepatic artery and right branch of the portal vein was identified and ligated. The line of ischaemia was used to determine the plane of transection. A parenchymal division was performed with a clamp-crushing technique. Intrahepatic hematoma and a biloma were found along the plane of transection. After cross-clamp and perfusion, the right hepatic vein was divided with a vascular stapler, and the left lobe graft was procured along with the entire vena cava, the common bile duct, the main portal vein, and the celiac trunk (Figure 3). On the back table, we performed another bile leak test using methylene blue. The sites of leakage were sutured with 4.0 PROLENE sutures. The graft weight was 544 g, and the graft-recipient weight ratio (GRWR) was 1.15. 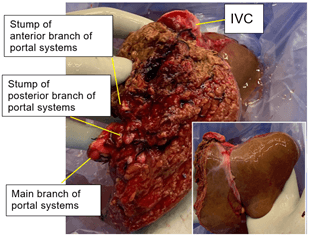 The recipient was a 62-year-old female patient who had alcoholic liver cirrhosis and refractory ascites. Her Model for End-Stage Liver Disease Na (MELD-sodium) score was 19 points. She was sequence number 42 on the offer, with eight centers having declined the organ ahead of our center. At our center, we declined this organ for 17 recipients ahead of the patient who was ultimately transplanted. The liver graft was transplanted using the piggy-back technique. Organ reperfusion was homogeneous and without bleeding or bile leak from the resected surface. Cold ischaemic time was 5 hours 18 minutes, and warm ischaemic time was 29 minutes.

The postoperative course was uneventful and notably without bile leak. All surgical drains were removed within 5 days after surgery. The patient was discharged on day 7 with normal liver function. The patient recovered well 3 months after surgery without any complications. At most recent follow-up, the allograft function was excellent (AST= 19 U/L, ALT= 24 U/L, Bili= 0.3 mg/dL). CT angiography with reconstructions affirms the transplanted anatomy (Figure 4). 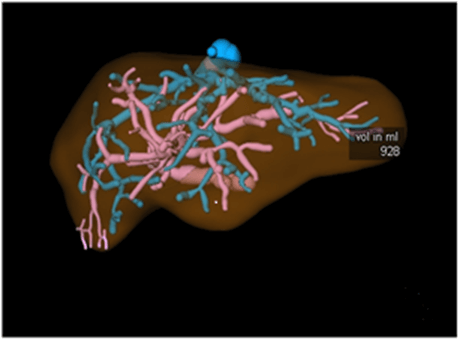 In the United States, brain-dead donors represent the vast majority of organ donation. A substantial number of these patients have suffered trauma [2]. Lacerated livers are generally considered high-risk organs for developing initial poor function or primary non-function. Several risk factors such as the parenchymal injury in and of itself, aggravated injury by warm or cold ischaemia time, bleeding or thrombosis of damaged vessels, or a potential risk for hepatic abscesses or bilomas all may increase the risk of early graft loss [1, 8]. Broering et al. reported that macroscopically traumatized livers result in a higher incidence of primary non-function, requiring urgent re-transplantation, with a 64% 6-months graft survival rate, in their 14-cases series of transplanting livers with high-grade lacerations [5]. There have been several individual case reports of whole-organ transplants with high grade lacerations. Lacerated livers have been managed by a combination of sealants, glue, suturing, packing, or arterial embolization [1, 3, 4]. In our case, we employed a similar evaluation and management strategy to that used in our living donor assessments. Specifically, we reviewed the films as a group to gain consensus on feasibility, performed an early intraoperative cholangiogram, and procured the liver with experienced living donor surgeons. Because the injury was confined for the most part to the right lobe, our experience with left lobe living donor grafts greatly informed our strategies.

One of the most challenging problems using livers with grade 4 and 5 injuries is the management of associated bile duct injuries [8, 9]. The incidence of ischaemic intrahepatic bile duct injury following liver transplantation is 5-19% [8]. These are characterized by non-anastomotic biliary strictures and dilatation in graft tissue, which occur mostly within six months from post-liver transplant [10]. Intrahepatic bile duct injury may lead to bile leakage, ascites, biloma, hemobilia, and abscess [1, 5, 11]. Some etiologic factors for intra-parenchymal bile duct injury include hepatic artery thrombosis, ischaemia, preservation injury, and trauma to the biliary tract [5, 11]. To diagnose bile duct injury, we recommend performing intraoperative cholangiography early in the procurement and/or cholangiography during the back-table procedure [1, 5]. However, as mentioned above, the potential risk of biliary complications, even if the cholangiogram is negative, is high. It is generally thought that traumatized livers fulfilling the Moore injury grade IV or higher along with extensive vascular disruption are too severely damaged to be managed appropriately and considered for LT [1].

Application of split liver techniques could be a more reasonable approach than attempting to use the whole graft in these cases. Partial liver graft, however, are predisposed to a higher rate of vascular or biliary complications, resulting from anatomic variation and difficulty in vascular and biliary reconstruction [12]. Since the left lobe graft in our case retained the entire vena cava, and full length of artery, portal vein, and bile duct, anastomoses could be constructed as they are in whole-organ liver transplant. Such anatomical advantages promise excellent outcomes [7]. We would consider it crucial that the partial graft in these instances retain all main vascular and biliary branches. Further, a minimal dissection technique utilized in LDLT should be used for split liver transplant to optimize blood supply to the recipient bile duct, particularly when choledochocholedocostomy (as opposed to a choledocho-jejunostomy) is performed [13].

Careful donor and recipient selection are also essential for achieving successful outcomes. Choosing patients with an oncological indication such as HCC and in a good physical condition, which means patients with lower MELD-score would be beneficial for transplanting a lacerated liver [1, 3-5]. Moreover, hemi-liver split liver transplant for adult recipients carries the potential risk of graft failure due to size mismatch. A Graft-Recipient Weight Ratio (GRWR) of no less than 1.0% is generally considered the minimal requirement in hemi-liver split liver transplant to avoid early graft dysfunction [14]. To achieve such graft-recipient matching, split grafts should be taken from larger donors and transplanted into smaller recipients. The duration of cold and warm ischaemic time is also crucial. Although there are no defined hard limits, 8-14 hours for cold and below 45 minutes for the warm ischaemic time have been reported as safe cut-offs [15, 16]. In our case, we chose a small recipient with an acceptable MELD score, resulting in GRWR of 1.2. The use of a ‘local’ donor was ideal for achieving a shorter cold ischaemic time. The donor team needs to work more closely than usual with recipient teams in these cases to avoid a prolonged cold ischaemic time. Coordination with the teams procuring thoracic organs is also essential as a careful In situ split reduces the possibility of vascular and biliary injuries and minimizes the cold ischaemia time.

In summary, the successful application of well-established split-liver transplantation techniques, along with the extensive experience of a live-donor liver transplant team, allowed the use of a young allograft into a suitably selected recipient, with excellent outcomes. When organ procurement organizations are confronted with such a liver injury on an organ donor, we recommend they consider extending allocation to teams that may safely make use of this resource.

© 2021 Marlon F. Levy . This is an open-access article distributed under the terms of the Creative Commons Attribution License, which permits unrestricted use, distribution, and reproduction in any medium, provided the original author and source are credited. Hosting by Science Repository. All rights reserved.
DOI: 10.31487/j.SCR.2021.04.09

Figure 1: Preoperative contrast-enhanced multidetector abdominal CT showing liver lacerations spreading from around A) right branch of portal system to B) between right and middle hepatic vein.