Skip to content
Home
/
The Therapeutic Potential of Exosomes
Blog

An exosome is a nanoscale membrane vesicle derived from cell endocytosis that functions as an important intercellular communication mediator regulating the exchange of proteins and genetic materials between donor and surrounding cells. Exosomes secreted by normal and cancer cells participate in tumor initiation, progression, invasion, and metastasis. Furthermore, immune cells and cancer cells exert a two-way bidirectional regulatory effect on tumor immunity by exchanging exosomes. Current studies on exosomes have further expanded their known functions in physiological and pathological processes.

Scientists have known about exosomes for decades, but as recently as 2006, only 508, mostly obscure, papers referred to them, according to PubMed. Today, a search on the site brings more than 16,000 hits, including several high-profile publications from the last three years. That research explosion is due, in part, to Swedish scientist Jan Lötvall from the University of Gothenburg who showed in 2007 that some cells use exosomes to transfer genetic material – messenger RNAs to make proteins and microRNAs to regulate the expression of genes – between each other. Currently, many are manipulating exosomes to solve drug delivery problems for a dizzying array of therapies – small molecules, RNA therapies, proteins, viral gene therapy, and even CRISPR gene-editing tools. Still others are capitalizing on research that suggests the exosomes themselves, when derived from stem cells, could become a new branch of regenerative medicine.

The image below illustrates the biogenesis of exosomes. The plasma membrane invaginated to produced endocytic vesicles, which are further transformed into multivesicular bodies (MVBs). MVBs then move and touch to the plasma membrane to secrete vesicles into the extracellular environment, at which point the vesicles are defined as exosomes. It is currently believed that exosomes mediate information exchange between cells through four ways: (1) Exosomes are used as a signal complex directly stimulating recipient cells through binding to a cell surface ligand; (2) Exosomes transfer receptors between cells; (3) Exosomes deliver functional proteins or infectious particles to recipient cells; and (4) Exosomes transfer genetic information to recipient cells through mRNAs, microRNAs, or transcription factors. Once exosomes are absorbed by the recipient cell, stored lipids, proteins, mRNAs, miRNAs, and other molecules can then affect the function and cellular phenotype of the recipient cell by regulating signal cascade pathways, key enzyme reactions, cellular homeostasis, or other mechanisms. However, the physiological and pathological status of the source cell and the type of source and recipient cells determine the mechanism used and its effect. 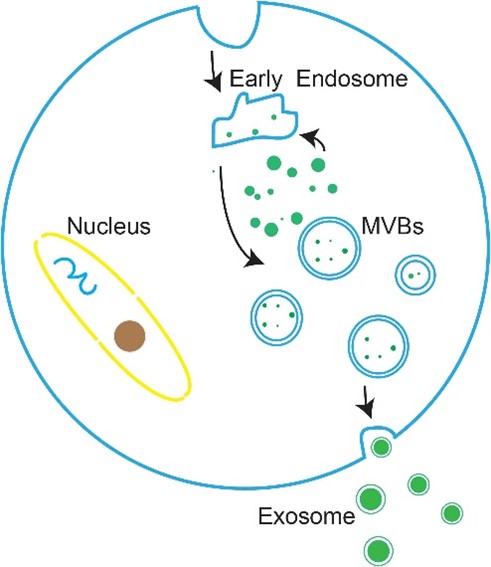 It was discovered that exosomes have a role in the pathogenesis of many bacterial, parasitic, or viral infectious diseases (see figure below). A) Virus-derived exosomes contain proteins and RNAs that act on specific DNA regions and not only regulate gene expression in host cells, but also alter their survival condition. B) Virus-secreted exosomes transfer trans-activating RNA (TAR-RNA) to stimulate expression of intracellular pro-inflammatory cytokines. C) Bacteria and parasites can transfer DNA that encodes drug-resistance to other pathogens, thereby promoting the growth of pathogens. Moreover, an infected cell can use such communication as a defense mechanism. 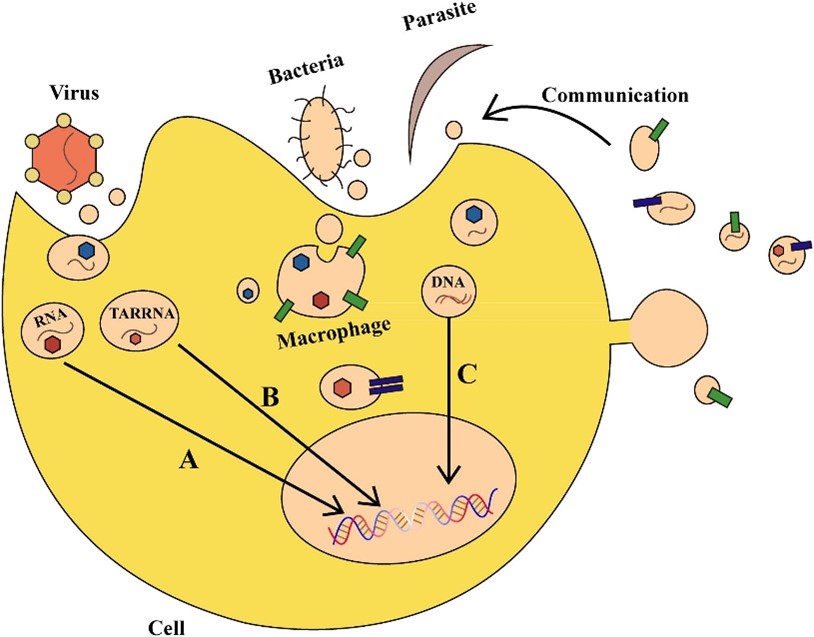 As a new model of mediating intercellular information exchange, exosomes transport oncogene materials and proteins in tumor initiation and progression. The function of exosomes in cancer cell behavior and tumor microenvironment is illustrated in the figure below. A) Tumor-derived exosomes can promote tumor formation by regulating the synthesis of cell-independent microRNA (miRNA), B) cancer cells secrete exosomes to modulate the tumor microenvironment, and C) tumor-derived exosomes can direct metastatic organotropism of cancer cells.

A vital area of exosome therapy lies with respect to stem cells. Stem cells are kind of cells with self-renewal and multiplex differentiation potential and can be differentiated into various kinds of adult cells, like the embryonic stem cells (ESCs), induced pluripotent stem cells (iPSCs), and somatic stem cells. Previously, cell therapy attracted much attention but encountered many practical problems such as the possibility of immune rejection and ethical issues though pluripotent ESCs have long been deemed as an ideal choice for regenerative medicine. As a result of the ability of circumventing the problems associated with ESCs, iPSCs have gained increasing attention. However, despite their promising potential, there are still many hurdles that should be overcome before iPSC-based therapies are put into clinical practice. Specifically, therapeutic application of iPSCs may involve the risk of teratoma formation and may cause genetic modification, which could possibly give rise to various obstacles. Therefore, a better stem cell type is needed urgently. Mesenchymal stem cells (MSCs), a type of adult stem cells appearing safe, have been widely used in a variety of clinical experiments. But one of the problems is the limited number of transplanted MSCs in animal models such as models of kidney injury, lung injury, and acute myocardial infarction after administration and rare differentiation into appropriate cell types; besides, the therapeutic effect of MSCs may not correlate with the engraftment, differentiation, and cell fusion when stem cells are added to the target cells. These phenomena may indicate that the MSCs exert their therapeutic effects through the effects of secreted factors. Exosomes, an important part of active components of the factors, are paid increasing attention and studies have shown that the exosomes derived from stem cells imitate the phenotype of parent stem cells, holding a therapeutic potential for various diseases. Stem cells like the iPSCs, ESCs, hemopoietic stem cells (HSCs), MSCs, and neural stem cells (NSCs) were all capable of secreting exosomes. In addition, the exchange between the exosomes and target cells are bidirectional; on the one hand, damaged cells secrete exosomes containing cell-specific miRNAs and, after internalization within the stem cells, stem cells begin to differentiate and acquire tissue specific cell types; on the other hand, MVs released from stem cells may confer a stem-cell-like phenotype to injured cells, consequently activating self-regenerative programs. The table below shows the function of exosomes derived from different types of stem cells. 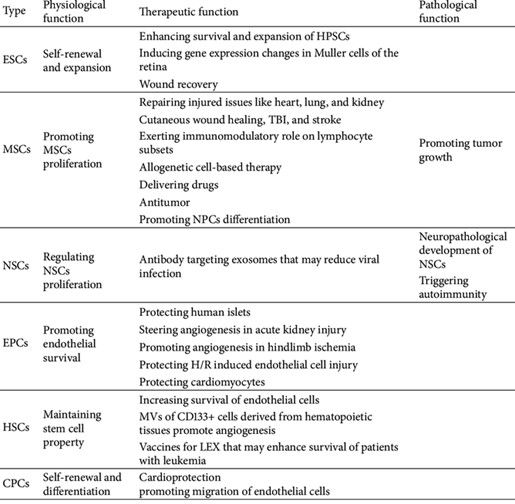 In conclusion, exosomes are undoubtedly a hot topic for targeted drug research and with good reason. The design of non-drug small molecule pharmaceuticals that target the secretory pathways of exosomes and other microvesicles have enormous potential and significant prospects. In addition to using exosomes as a novel drug delivery vehicle, considerable efforts have been performed to develop exosome-derived drugs by modifying the contents or surface proteins of tumor-derived exosomes. However, both target specificity and clinical effectiveness require further improvements. Exosomes were originally considered unremarkable vesicle structures, but with our current understanding they have become a global research interest. Exosomes exhibit significant research prospects, and exosomes and exosome-derived drugs have the potential to provide more effective methods in the treatment of clinical diseases as well as pathogenic infections. Furthermore, exosomes are set to become a critical tool in the prognosis, diagnosis, and treatment of various diseases such as cancer and neurodegenerative disorders as well as bacterial, viral, and parasitic infections. Also, exosomes can be released by various kinds of stem cells and are able to modify the function of the receptor cells and tissues. Compared with stem cells, which may cause abnormal differentiation and tumor formation, the exosomes mediated therapy harbors a more promising future. Some diseases including idiopathic pulmonary fibrosis are currently incurable, but MVs especially the exosomes have shown therapeutic potentials. However, there are still challenges to overcome in studies of exosomes. The most common method in isolation of exosomes is still ultracentrifugation which is time-consuming and requires a large number of cells and biological fluid. Although commercial exosome extraction reagents are now available and yield high numbers of exosomes, the products still need purification as they contain non-EV contaminants such as lipoproteins. There are other open areas such as the process where the exosomes choose respective cargo to transport, the way the cells take up the exosomes, and how many types of exosomes warrant further investigations. When referring to the exosomes released by the stem cells, the definite mechanisms of the action and specific therapeutic potential of each subtype still need further efforts.