Parasitic myomas are an infrequent type of myomas that appear in abdominal cavity. The incidence of this pathology has increased over the past years. There has been many hypothesis about the pathogenesis. One of the most recent ones is in relation to the start of laparoscopic morcellation at myomectomy or hysterectomy to treat uterine myomas due to the small fragments that can be detached during the procedure and that implant themselves in the abdominal cavity. Parasitic myomas, in most cases, are asymptomatic, but it can cause an unspecific abdominal pain, menstrual disturbances, dyspareunia and other gynecological symptoms. Physical exploration in patients is often also normal. The correct identification of parasitic myoma by image tests, such as transvaginal ultrasound, CT or MRI, is still complicated because it is difficult to diagnose due to the unspecific radiological characteristics that show up. CT and MRI give information about the location that could be useful during the surgery. Usually the diagnosis is an accidental finding during an abdominal surgery done for another reason and the histology of the piece is what gives the definitive diagnosis. We present a case of a 32-year-old woman, asymptomatic, after a transvaginal ultrasound is diagnosed a retroperitoneal tumor. The tumor was removed by laparoscopic surgery and the patient had a favourable recovery. The histopathology of the tumor was a parasitic myoma.

A-32-year-old patient, without medical or surgical history, allergic to penicillin and its derivatives, remitted to our consultation to study a retroperitoneal tumor shown in a vaginal ultrasound. From a digestive point of view, the patient was asymptomatic. She denied having nauseas or vomiting. She had a routine vaginal high-resolution ultrasound done that described a tumor which depends on the ovary, in the lower region of the uterus, towards the rectouterine pouch, with irregular edges, heterogenous content and calcifications about 51x29 mm with peripheric vascularization that suggested an ovarian teratoma. The uterus did not show any alterations except for a 11 mm subserous myoma. Neither ovaries presented alterations. She had a pelvic MRI, which showed a solid mass in the rectouterine pouch, shifted to the left, measuring 51x24x54 mm (CCxTxAP), hyperintense in T2 sequence and isointense in T1 sequence without signal loss in relation fatty tissue. A CT scan was performed also, and it did not show any pelvic adenopathy neither any changes as free liquid. (Figures 1 & 2). The patient had a normal abdominal exploration, with a tenderness abdomen, without pain and the tumor was not palpable. 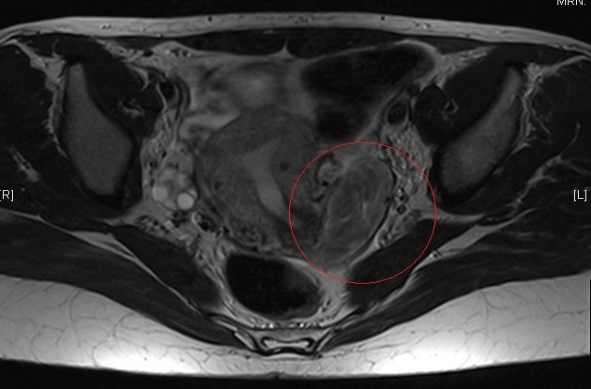 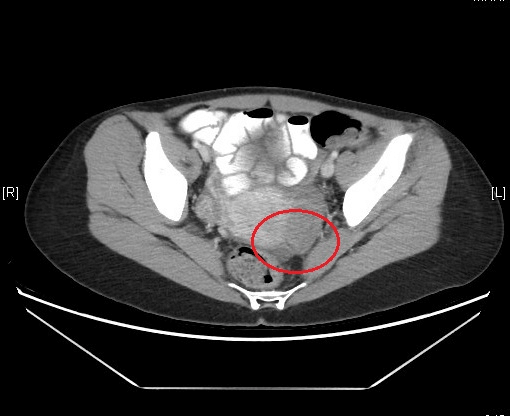 With these results, it was decided to do, under general anaesthesia, a laparoscopic exploration. Three ports were placed, one umbilical Hasson and the other two in left lower abdominal quadrant. First, the peritoneum was opened, identifying the gondal vessels and left ureter. The tumor was located in the retroperitoneum, with no relation to any vessels or uterus. Then the dissection of the mass was done, with carefully hemostasis with Atlas LigaSure®. There was no fracture of the piece, and it was taken out of the abdominal cavity with EndoCath® (Figure 3). 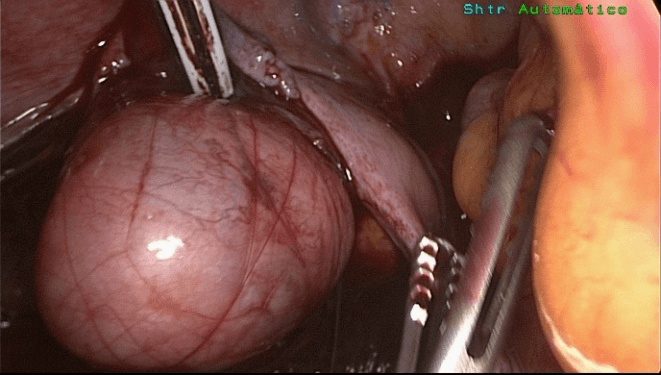 The patient had a favorable recovery, being discharged after 48 h. The histological result of the piece confirmed the diagnosis of parasitic myoma. A 5.5x5x3 cm fragment of whitish appearance was analysed. The study revealed a proliferation of well-defined muscle cells without cytological atypia of well-defined elongated nuclei of lax chromatin and syncytial-looking cytoplasm that are arranged forming intersecting beams. Dispersed mast cells and vessels of different caliber are identified, showing sclerosed thick walls without identifying atypical mitosis or necrosis.

Uterine myomas are the most common benign gynaecological neoplasm in women. Its main composition is smooth muscle and fibrotic connective tissue. It appears during fertile age, and they are located in uterus, cervix and broad uterine ligament. Rarely, they appear in the abdominal cavity, but these are what we name as parasitic myomas. There are not many clinical cases published. It has a low incidence. Cucinella et al., in his article, analysed 423 women, after a hysterectomy or myomectomy with laparoscopic morcellation, and showed a prevalence of 0.9% of parasitic myoma [3]. In those women who had a myomectomy, the prevalence was higher, at around 1.2%. Tulandi et al., did a systematic review which included 51 articles, with the purpose of showing the benign sequels after those laparoscopic surgeries [4]. This review also reflects a parasitic myoma prevalence of 0.9%.

The first description of parasitic myoma was back in 1909, by Kelly and Cullen [5]. In 1997, Ostrzenski described the first case of parasitic myoma after laparoscopic myoma [6]. The etiopathogenesis of this pathology is still unknown. There are many theories of what causes parasitic myomas. The classic theory, proposed by the previous authors, exposes that the parasitic myomas appear after a detachment of a pediculated subserous myoma, which implants itself in the abdominal cavity and which supplied by aberrant blood vessels, allowing its growth [7]. Another theory, that came about after the start of the laparoscopic morcellation, defends that the cause of the parasitic myoma is the dissemination of small fragments during the morcellation technique. Those fragments implant themselves over the abdominal cavity and are supplied by aberrant blood vessels, similar to what happens in classic theory [1, 2].

In our case, the patient did not have surgical history, so the first hypothesis exposed could be the one that justifies our case. Generally, the uterus myoma growth depends on hormonal and growing factors, such as sex hormones, estrogens and progesterone, so it could be supposed that parasitic myomas would be influenced by these factors as well [8]. Most of parasitic myomas are asymptomatic, between 21.7-25%, but unspecific abdominal pain (9/12), menorrhagia (1/12) or dyspareunia (1/12) can also appear [9]. It is also described as an intestinal perforation because of parasitic myoma [1]. These are classically located in the uterus, but they have also been described in other locations, for example, under the diaphragm [10].

The period of appearance of parasitic myomas after morcellation is about 45 months [9]. This could be influenced by hormonal factors, as we previously explained. Cucinella et al., exposed a woman who got pregnant after a laparoscopic myomectomy with morcellation, and the period from the surgery to the diagnosis of parasitic myoma was lower than the other cases [3]. The average size is 20x50 mm, but the biggest parasitic myoma described measured 30 cm [9]. The differential diagnosis should be done mainly with leiomyoma, adenomatosis and endometrial cysts. Physical exploration is the first step in the diagnosis of this pathology, including a bimanual vaginal exploration. However, because of the extrauterine location, the exploration of parasitic myomas is more complicated. Nowadays, its identification by image tests is also complex as the radiological characteristics are unspecific and forced to discard other tumors as teratomas. The first diagnostic imaging technique is the transvaginal ultrasound followed by an abdominal ultrasound. A solid pelvic mass with cystic appearance is usually showed in this technique, but it has unspecific characteristics [11].

The MRI and CT are useful to locate the tumor when planning the surgery. In these imaging techniques, the characteristics of parasitic myomas are also unspecific, but in the T2 sequence of MRI, has a lower signal, similar to smooth muscle [11]. The most frequent diagnosis of parasitic myomas are incidental findings during another abdominal surgery. The histopathology of the piece after the surgical resection is what confirms the definitive diagnosis. In our case, the patient had an exploratory laparoscopy to remove a retroperitoneal tumor under a suspected diagnosis of as teratoma, and it was the histopathology that gave the definitive diagnosis of parasitic myoma.

Despite that uterine myomas are the most common benign tumors in women, there is an infrequent extrauterine type of myoma, known as parasitic myoma. This pathology occurs more frequently after myomectomy or hysterectomy with laparoscopic morcellation. The incidence has increased in the latest years due to the start and increased growth of laparoscopic techniques. To prevent its appearance, it’s important to pay attention to the small fragments that are detached during the surgery. The utility of using a bag to collect the maximum number of fragments during the technique should be assessed.

© 2021 Sonia Soto-Schutte. This is an open-access article distributed under the terms of the Creative Commons Attribution License, which permits unrestricted use, distribution, and reproduction in any medium, provided the original author and source are credited. Hosting by Science Repository.
DOI: 10.31487/j.SCR.2020.09.06