The fact that the human microbiome market is projected to be worth $1,731 million by 2027 is reason as well as evidence enough for the level of attention the area of human microbiome research has recently garnered. The interest in the human microbiome, i.e., the collection of all microorganisms living on or inside ours bodies, is relatively new and have culminated in an explosion of global research activity, spearheaded by the Human Microbiome Project (HMP) of the US’ National Institutes of Health that ran in two phases from 2007 to 2016, receiving $170 million in funding. The numbers illustrated in the picture below very well summarizes the supreme importance of the resident microbes in our bodies. The more we know about them, the more it challenges our traditional idea of ourselves as biologically independent beings as these organisms are being found to provide us with physiological capabilities far beyond our own scope. In this respect, many are starting to consider the human body as a superorganism or holobiont, especially considering that by modulating the gut-brain axis these microbes control our very identity and self-concept! 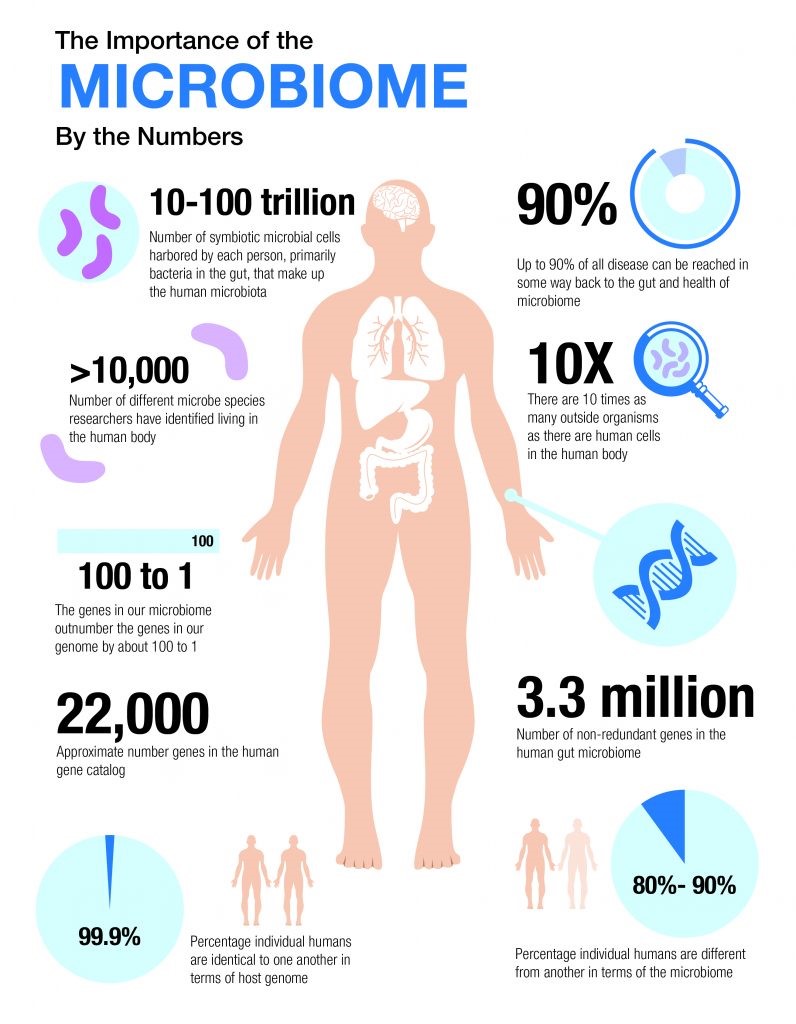 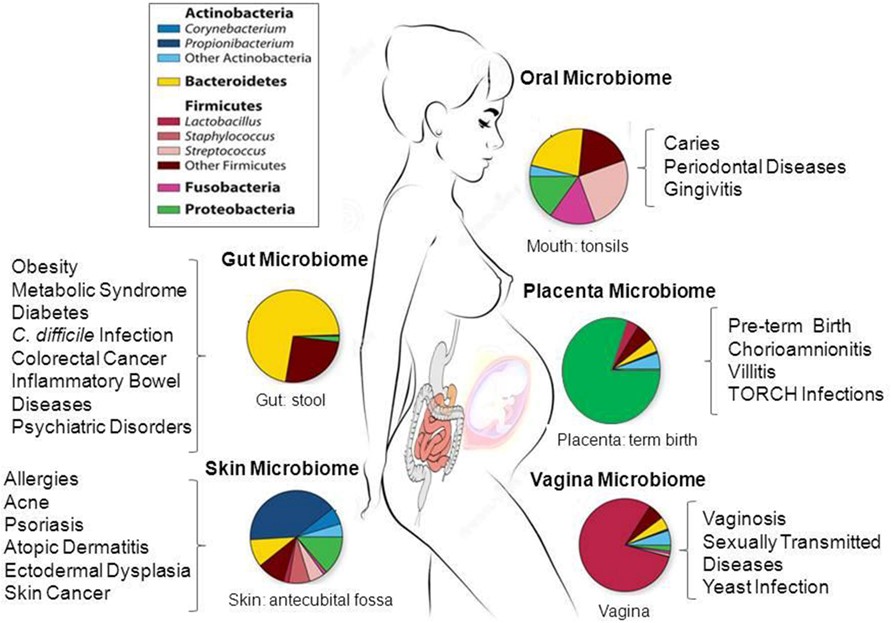 The microbiome currently attracting the most attention is undoubtedly the gut microbiome, although its influences are anything but limited to the gut (as is evident in the picture above). There is growing evidence that the exposure to microbes begins in utero and the gut flora is established within 1-2 years of birth. Although the population relatively stable over lifetime, it is highly amenable to external factors like diet, thus offering the exciting possibility of controlling health and disease states by altering them. This has resulted in the current craze of probiotics (live microorganisms which when administered in adequate amounts confer a health benefit to the host), prebiotics (non-viable food components that confer health benefits on the host associated with modulation of the microbiota) and synbiotics (an effective combination of a prebiotic and a probiotic). A notable development in this regard is the establishment of the gut-brain-microbiota axis, which comprises the cross-talk between the central nervous system, neuroendocrine and neuroimmune systems, the sympathetic and parasympathetic autonomic nervous systems, the enteric nervous system and the intestinal microbiota. This has further led to the idea of psychobiotics, which are live bacteria that, when ingested in appropriate amounts, might confer a mental health benefit by affecting the microbiota of the host organism. Currently, the most successful treatment approach involving the human microbiome is the fecal microbiota transplantation that is used to effectively treat C. difficile infection.

While the prognostic, diagnostic and therapeutic potential of the human gut microbiota is being widely recognised, the continued advances in this field throw up some challenges. Firstly, some of the current literature seems to be cluttered with hype and speculation rather than real research, so much so that at this point, it is difficult to find a prominent human disease that is not somehow connected to the microbiome. In this regard, we must keep in mind a few points like correlation does not mean causation, the animal models used in the studies may not be suitable to draw parallels for humans, the detection of microbes at a certain site in the body does not necessarily mean that they comprise the microbiome, etc. Also, some claims being made in the popular media are exaggerated as they are extreme extrapolations of scientific findings. Moreover, the recent commercialization of the microbiome, resulting in a whole functional foods industry, is also concerning as the production of the food are often not well-regulated, are overpriced, and are frequently marketed by pseudoscientific entities and so-called microbiome experts. Another big challenge lies in translating the research into safe and effective clinical interventions. Some of the reasons are the lack of a lot of fundamental information, including the precise role of environmental factors, the uncertainty about commonality and variability within and across individual microbiomes, the fact that changes in the microbiome in one part of the body can affect that in other parts, and the far more complex relationship than cause and effect between the microbiome and disease. However, overall, this is an exciting time for the human microbiome research. By tackling the emerging priorities in this field, it has the potential to cause paradigm shifts in the current medical practice!