Aging is often viewed as an inevitable decline in overall health. However, recent genetic discoveries have highlighted specific cellular pathways responsible for symptoms of aging. Progeria is a rare genetic disorder that occurs in 1 in 4 million births, which causes children to age prematurely. All progeria patients share a single genetic mutation that causes them to physically age at a rapid pace and pass away in their early teens. The life expectancy of progeria patients is 13. Progeria comes from the old Greek word with “pro” meaning before and “geras” meaning old age. This disease is formally known as Hutchinson-Gilford Progeria Syndrome (HGPS). It is named after Dr. Jonathan Hutchinson, who discovered it in 1886 and Dr. Hastings Gilford, who independently discovered it in 1904.

How Do You Get Progeria?

Progeria is caused by a single nucleotide substitution and is not passed down from parent to child. This genetic mutation is rarely inherited as it occurs as a new mutation, and moreover, the carriers usually do not live that long to reproduce children. It is caused by a random accident during cell division. Progeria affects a protein called the Lamin A, which is encoded by the gene LMNA located on chromosome 1. The normal Lamin A protein has a farnesyl group added to the C terminus by the enzyme farnesyltransferase. In progeria, the farnesyl group at the end of the prelamin A protein cannot be removed. The defective protein remains fixed to the nuclear rim instead of becoming part of the nuclear envelope. As a result, the nuclear envelope does not have the support to maintain its normal shape and the cell is at risk of dying prematurely.

Effects of Progeria on Children

At birth, children suffering from progeria appear normal, with only some skin-related symptoms. Usually, within the first and second years of life, however the growth rate slows down substantially resulting in the height and weight of the children falling further below the average of their age. Motor skills and intelligence remain at par with those of other children of their age group. 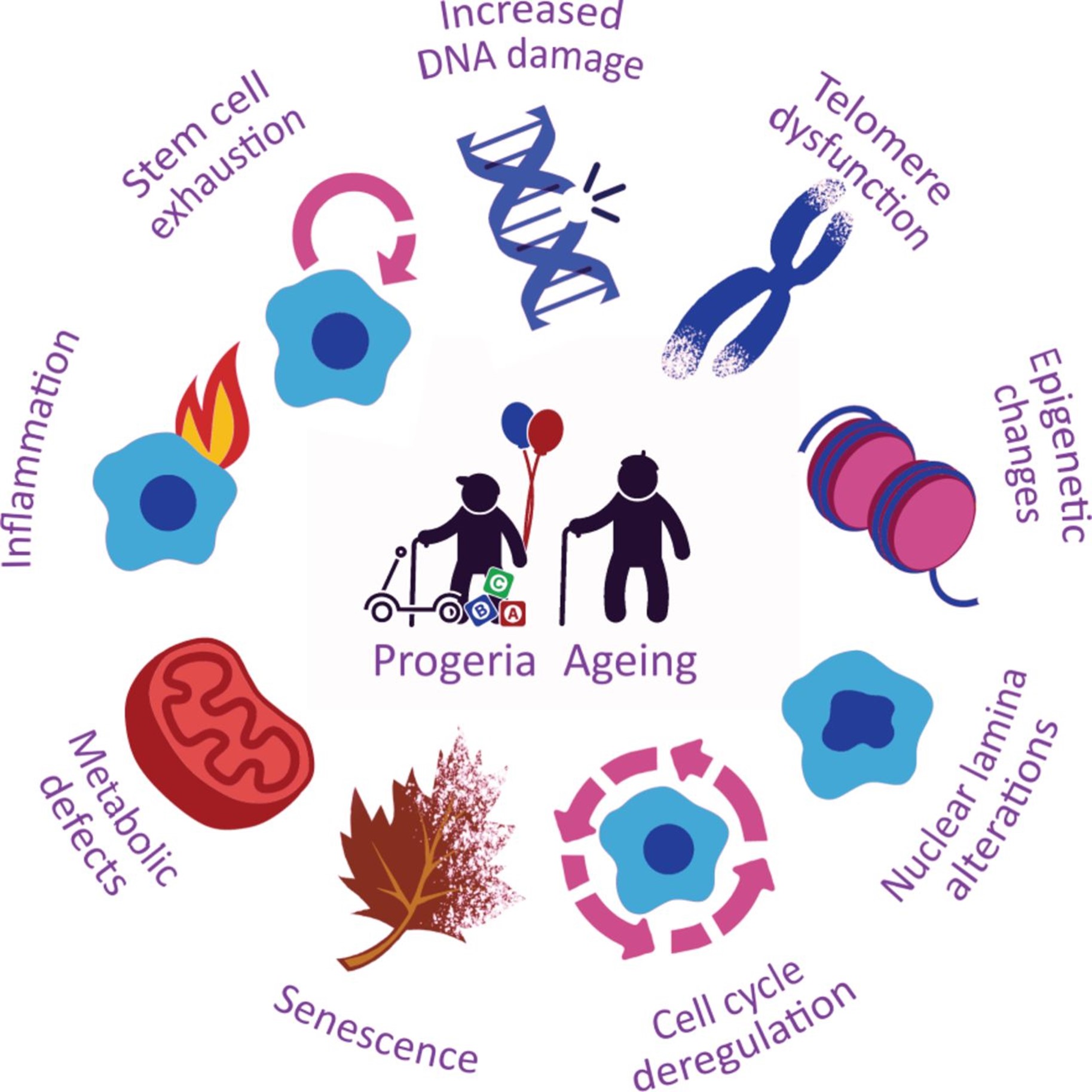 Though possessing normal intelligence, children affected with progeria develop a noticeably distinct appearance characterized by aged-looking skin, visible veins, baldness, hair loss including eyelashes and eyebrow, a small jaw and face relative to the head size and a pinched nose. Often, they also suffer from symptoms such as severe-progressive cardiovascular disease, hip dislocations and stiffness of joints, which are typically observed in much older people. To ease the life-threatening cardiovascular complications arising due to progressive atherosclerosis, some children with this syndrome also go through angioplasty or coronary artery bypass surgery. However, currently there is no cure or treatment for this underlying condition and death occurs usually at an average age of 13 from stroke or heart attack.

• A study published in The Journal of American Medical Association (JAMA) in 2018 reported that lonafarnib, which is a farnesyltransferase inhibitor (FTI), helps in extending the survival in children with progeria. More than 250 children from six continents were tracked by the authors from Boston Children’s Hospital and Brown University to demonstrate a link between extended survival and lonafarnib treatment.
• CRISPER/Cas9- based therapies have been found to hold considerable promise in the treatment of genetic disorders. Hutchinson-Gilford progeria syndrome stands out as one of the potential candidates among these. The efficacy of a CRISPER/Cas9- based approach has been explored by researchers that introduces frameshift mutation in the LMNA gene, thus reverting several alterations in Hutchinson-Gilford progeria syndrome cells. Single-dose CRISPER/Cas9 therapies have been found successful in extending the lifespan of mice with this syndrome, therefore holding a promising approach.
• Recent studies have indicated that reactive oxygen species (ROS) play a major role in HGPS phenotype progression. Therefore, pharmacological reduction in the levels of ROS has been proposed as a potentially effective treatment for children with this disorder. Rho‐associated protein kinase (ROCK) inhibitor (Y‐27632) has been identified as an effective reagent in reducing the ROS levels in HGPS fibroblasts.

In addition to the implications for the diagnosis and conceivable treatment of progeria, the revelation of this model’s underlying genetics of premature aging may assist in revealing new insight into people's normal aging process.