Skip to content
Home
/
The Criminal Behavior of Genes
Blog

Criminal behavior results when individuals are improperly socialized and thus do not feel bound by the laws or rules that have been established by society. Many common factors that characterize individuals who commit crime. Criminal behavior, such as violent and antisocial behavior, came up as a significant social problem with complex causes. It has been known that a myriad of environmental, social, psychological factors along with genetic factors are associated with an increased risk of various convictions. Impulsive aggression plays a critical role in the manifestations of violent and criminal behavior and is considered an essential psychological symptom of several mental disorders, including borderline and antisocial personality disorders.

Genetic analysis of the crime and the criminal revealed two genes associated with violent crime, and these genes have been found to have a repeated history of violent behavior. Identifying the crucial role of genetics in criminal behavior implies there must be something known as a “Crime Gene”. Although genes alone cannot be framed, the only factor responsible for becoming a criminal, also a presence of genetic predisposition towards a certain behavior does not define that an individual is destined to become a criminal.

Genes related to violent crimes are:
1. MAOA gene: The MAOA gene located in the X chromosome mainly codes for the enzyme monoamine oxidase A, an important enzyme that controls the amount of dopamine and serotonin in the brain. The MAOA gene is also known as the warrior gene since mutations or abnormal versions in the gene often results in aggressive behavior. Deficiencies in MAO-A activity have been identified to correlate positively with aggressive behaviour and other behavioural changes, but it is also found to be influenced by environmental factors.
2. Cadherin 13 (CDH13): CDH13 was previously associated with the risk for attention-deficit/hyperactivity disorder (ADHD) along with comorbid conditions including drug, alcohol abuse, and various neurodevelopmental disorders.

Other Factors Related to Criminal behavior

There are various interrelated factors including, poverty, poor nurturing, poor diet, high social inequality levels, low educational attainment, low self-esteem, and impulsivity. Breakthrough in research investigated that there is also the role of some other candidate genes engaged in imparting an increased risk of involvement in antisocial behavior and mainly focusses on genes that influence how nerve impulses are transmitted and received in the brain.

Pathways that follow the relation to antisocial behaviors are:
1. The dopaminergic pathway: Dopamine is a monoamine neurotransmitter which influences mood, motivation and reward, arousal, and other behaviors. The dopamine DRD2 receptor gene encodes the post-synaptic D2 receptor in the brain with a specific effect in the regions of the mesolimbocortical dopaminergic pathway. Reduced dopamine binding sites results in a lowered dopaminergic activity that is reliably connected to impulsive violence. The reduced dopaminergic activity frequently exhibits a predisposition towards lower functioning of the dopaminergic pathways and aggression, ultimately motivating individuals to seek rewards from external sources like drug abuse.
2. The serotonergic pathway: Research indicates that serotonin, a neurotransmitter, normally has an inhibitory action in the brain, and it is involved in the regulation of behavior and emotion, impulse control, sleep, and appetite including the inhibition of aggression. The serotonergic pathway is involved in brain development and malfunction in this system increases aggressiveness and impulsivity. Several genes involved in this pathway are found to be associated with antisocial behaviors such as impulsivity, aggression, and ADHD.
3. The noradrenergic pathway: The epinephrine/norepinephrine system, facilitates autonomic nervous system activity and fight-or-flight reactions. The noradrenergic system generally functions as a central arousal system. 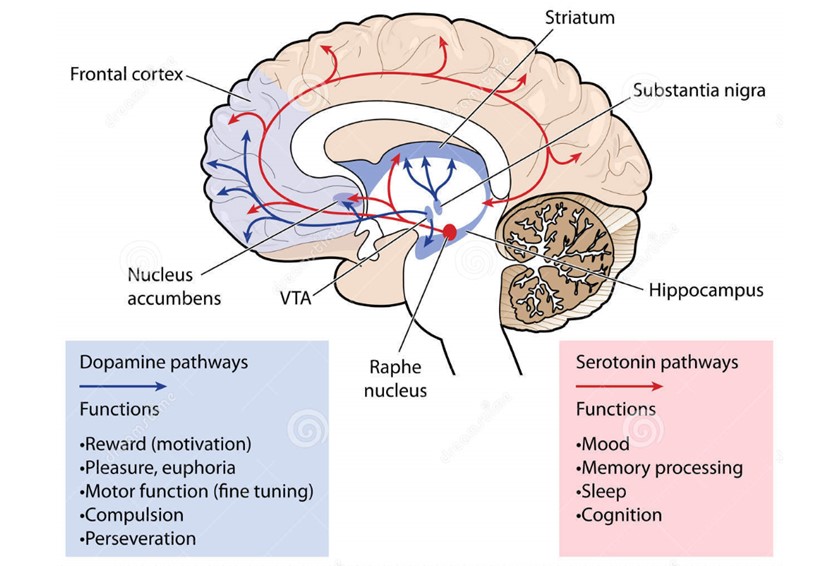 Several studies indicate that serotonin and dopamine systems interact closely at the basic neurophysical levels, and the destruction of the serotonin pathway function can lead to dysregulation of the dopamine system which signifies that their functions are interrelated. Additionally, hypofunction of serotonin represents a biochemical trait that predisposes individuals to aggressive behavior, and the hyperfunction of dopamine contributes in an additive fashion to the serotonergic deficit. Several analysis of the data suggests that there is a strongest link between genetic variation and aggression which comes from monoamine oxidase A (MAOA). Changes in expression of specific genes such as MAOA, DAT1 and DRS2- in the brain can affect neurotransmitter levels which in turn, may influence complex functions such as intelligence, mood, and memory. Genes come out as the strongest predictor of whether a person has a predisposition towards crime or any criminal behavior.