Heart failure is a serious concern among individuals worldwide and also defined as a global pandemic. Over 5 million people in USA suffer from heart failure. Where the heart is the first organ to form in the developing embryo, why does heart failure seem to be relatively high compared to any other diseases? Unlike some organs of human body, the human heart is unable to repair itself after cardiac infraction or injury. In contrast to the human heart, some lower organisms like zebrafish and newts can repair and regenerate its damaged heart tissues by itself with the remaining healthy heart muscles after injury. Cell-based regenerative therapies became a promising treatment for heart failure as well as underlines the need for reproducible results in preclinical and clinical studies for safety and efficacy.

Where Lies the Origin of Regeneration?

Every organ and tissue in the adult human body retains a niche of stem cells whose potency is generally specific to the resident tissue cells. Understanding the proper mechanisms of embryonic heart development, particularly the signals associated with the initiation and termination of heart, gives a blueprint for establishing therapeutic regenerative approaches that utilize similar molecular pathways. During embryonic development, cardiac progenitor cells (CPCs) arise from a subpopulation of mesodermal precursor cells which can be built from in vitro differentiated embryonic stem cells (ESCs). There are various receptors whose expression marks the growth of primary and secondary cells of the heart.

Depletion of cardiomyocytes is the cause of decreased cardiac contraction, leading to pathological cardiac dilatation, additional cardiomyocyte loss, and mechanical dysfunction, culminating in heart failure. Despite having the low regenerative capacity of the human heart compared to lower organisms, studies suggest that stem cells can induce human heart regeneration after injury. Cardiac regeneration is a broad effort with cutting-edge science that aims to repair irreversibly damaged heart tissue, using stem cell therapy. Various reparative stem cells are engineered to restore damaged heart tissue and its function using the body's natural ability to regenerate.

Human embryonic stem cell (ESC), induced pluripotent stem cell (iPSC) populations, mesenchymal stem cells (MSC) and some adult stem cell types have the capability to improve cardiac morphological and functional characteristics. In addition, the resident cardiac stem cell can also act as the source for heart regeneration. The challenge lies in the identification and selection of the most suitable stem cell type for regeneration. 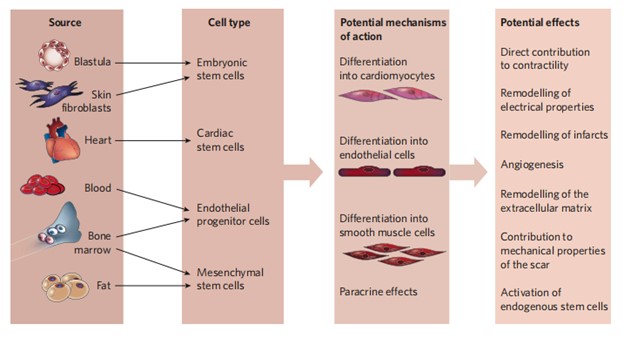 What Helps Stem Cells in Regeneration? 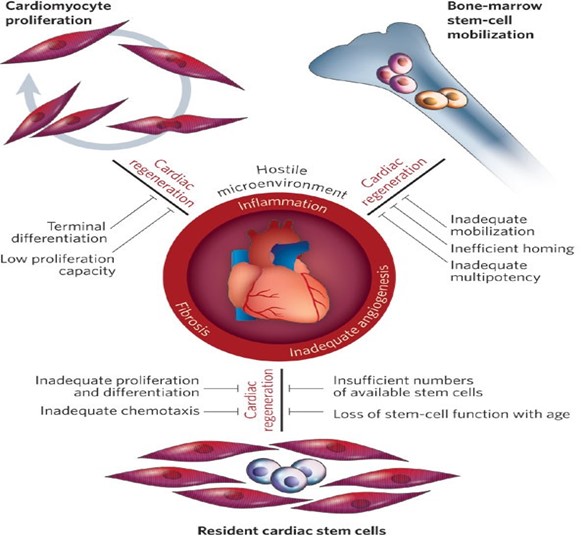 The mechanism for cardiomyocyte homeostasis in normal mammalian myocardium is different from regeneration after injury, that can trigger a cascade of signals that activate dormant progenitor cells or induce proliferation of existing cardiomyocytes. Identifying transient regenerative period in the heart of neonatal mice provides a new resource to study the mechanisms governing mammalian cardiac regeneration. Significantly, a postnatal switch from glycolytic to oxidative metabolism and an increase in cardiomyocytes oxygenation state can induce the production of reactive oxygen species (ROS) in mitochondria. The increase in ROS levels leads to the activation of the DNA damage response (DDR) pathway, which induces postnatal cardiomyocyte cell cycle arrest. Further, the postnatal cardiomyocyte proliferation window can be extended by pharmacologically scavenging ROS or inhibiting the DDR pathway. Also, exposing adult mice to gradual, severe, systemic hypoxia led to decrease in ROS production and oxidative DNA damage, which reactivates cardiomyocyte mitosis and leads to heart repair after heart injury. These remarkable findings suggest a novel therapeutic approach for heart regeneration whereby the proliferative capacity of cardiomyocytes that remains silent in the adult mammalian heart can be reawakened by environmental adjustments rather than directly manipulating specific signaling pathways in cardiomyocytes.

1. The low yield of CMs from spontaneous human embryonic stem cell (hESC) differentiation and the massive loss in cardiac cells from a typical myocardial infarction together present a critical issue in stem cell therapeutics.
2. Cardiac cell preparations need to be of high purity to overcome risk of local or distant teratoma formation.
3. Poor cell survival can lack proper regeneration.

Stem cell transplantation represents the first realistic strategy for reversing the deleterious effects of what has until now been considered terminal damage to the heart and understanding the molecules that direct heart development and the heart’s environment is crucial for creating new essential treatments. Clinical investigators are experimenting out new approaches to regenerate cardiac tissues and prove the effects of these therapies in patients with heart disease. Various new methods are required for directed differentiation of stem cells into functional CMs and cardiac progenitors, utilizing chemical, genetic, epigenetic and lineage selection. Given the promise of clinical and therapeutic interventions to enhance the regenerative capacity of multipotent stem cells and precisely guide endogenous or exogenous stem cells into a cardiac lineage, their application in cardiac regeneration is the focus of future clinical research. More extensive research is needed to generate perfect off-the-shelf stem cell therapeutics. Interestingly, cardiac muscle is one of the few tissues that develop under the effects of dynamic force, and it might not be surprising that conditions generated by the force of fluids in motion can enhance cardiomyocytes differentiation.