Skip to content
Home
/
Oxidative Stress: A Cause of Male Infertility
Blog

The global pervasiveness of infertility varies between 2.5% -15%, correlating to at least 30 million infertile men worldwide. OS plays a contrasting role; its positive effect corresponds to the maturation of the sperms and infertility among men results from the negative consequence of OS. Reactive oxygen species (ROS) is a very well-known unstable molecule (a free radical) that contains oxygen and well capable of reacting with other molecules inside the cell. The problem begins when the reactive oxygen species (ROS) exceeds the scavenging capacity of antioxidants, which creates an imbalance between them that eventually leads to DNA damage and oxidation of lipoprotein components at the cellular and subcellular level.

Since the oxidative stress in the reproductive tract cannot be attributed to ROS production alone, other factors are also responsible for the generation of ROS. The major site of the generation of ROS is the mitochondria and sperm plasma membrane. The source of ROS is majorly from polymorphonuclear leucocytes (PMN) in semen and abnormal spermatozoa. Some recent studies found that NADPH oxidase 5 (NOX5) of spermatozoa plays a vital role in ROS production. Furthermore, sperm gets exposed to a plethora of other factors in the testes, epididymis and male accessory gland fluids that can regulate ROS generation inside sperm. The mutual story begins when ROS causing injury to the mitochondrial membrane and injured mitochondrial membrane causing an enhancement in ROS production.

A dynamic counterbalance occurs between pro and antioxidant substances in the human ejaculate. Low concentrations of reactive oxygen species have a biopositive effect that plays a selective role in physiological processes. A large number of mitochondria are present in the middle piece of sperm cells which supply energy for the motility of the sperms. The metabolism of prostanoids occurs in gene regulation, regulating cellular growth, intracellular signaling, and the other types of signal transduction. The positive effects also include capacitation, hyperactivation, motility, acrosome reaction and fertilization. The regulation of nuclear maturation in spermatozoa is also a part of the positive effect of reactive oxygen species.

The negative effects are completely based on the excess generation of the reactive oxygen species, which can overwhelm the protective mechanisms in spermatozoa and initiate the changes in lipid and/or protein layers of the sperm plasma membrane. 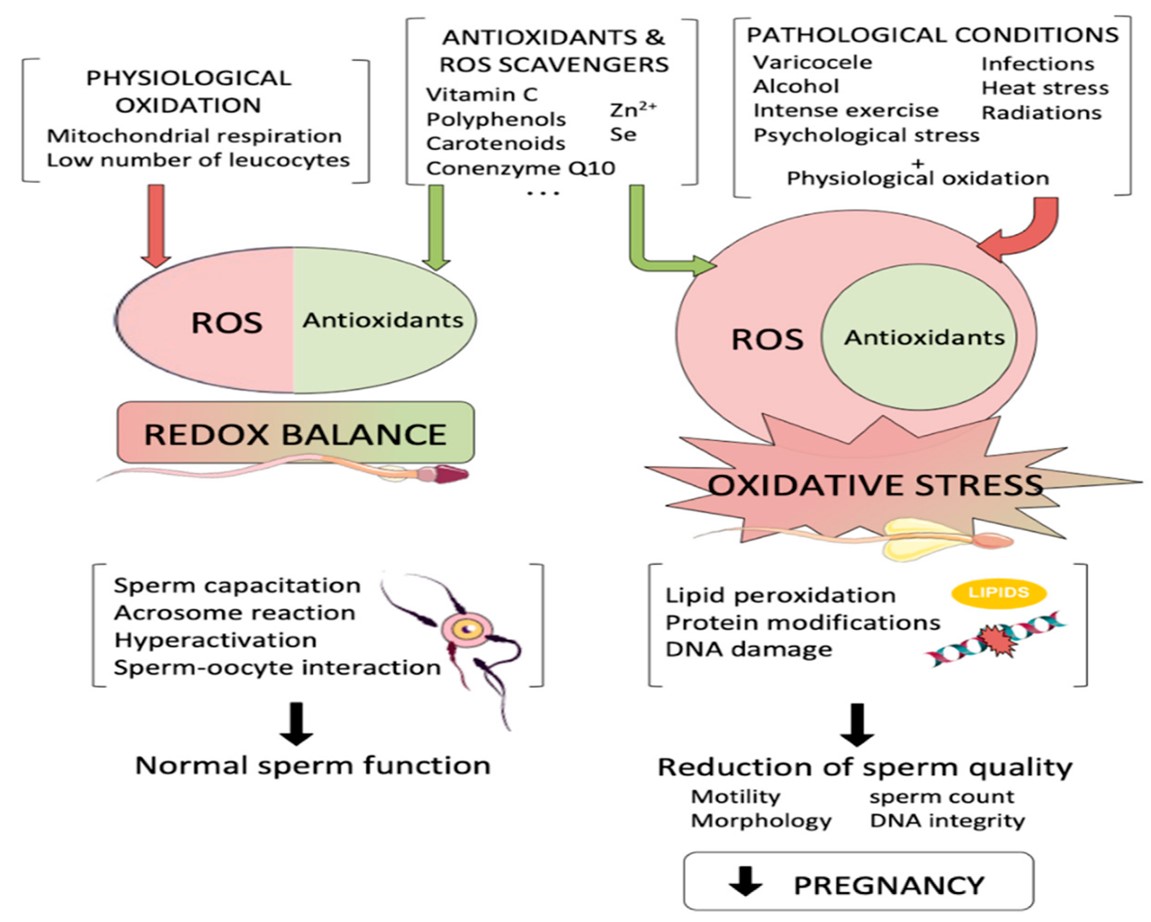 Cells living under aerobic conditions constantly face the O2 paradox – (O2) is required to support life, whereas its metabolites such as ROS can modify cell functions and endanger cell survival. Sperms are particularly susceptible to the reactive oxygen species (ROS) during the critical phases of spermiogenesis. The body has the mechanism of an antioxidant defense system which scavenge and minimize the formation of oxygen-derived radicals to protect itself from oxidative damage. The seminal antioxidants play a beneficial role in restricting the ROS level in sperms and finally improving sperm parameters and developmental potentials. The antioxidant capacity acts as a savior against the excessive generation of ROS to protect the sperm motility. There are different antioxidants present in human ejaculate that include: enzymic antioxidants, low molecular weight antioxidants, and transition male chelators.

Spermatozoa are risk-prone to oxidative stress and oxidative DNA damage (ODD) as these cells have minimal antioxidant defense mechanisms and a limited capacity for detection and repair of DNA damage.
• The plasma membranes contain large quantities of polyunsaturated fatty acids (PUFAs).
• The cytoplasm contains low concentrations of scavenging enzymes.
• The intracellular antioxidant enzymes cannot protect the plasma membrane that surrounds the acrosome and the tail. 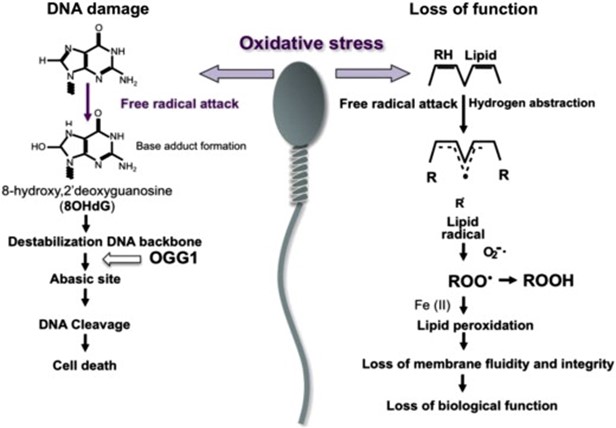 Many intrinsic and extrinsic factors induce OS; some of them are as follows:
• Alcohol consumption
• Smoking
• Varicocele
• Obesity
• Diabetes
• Physiological stress
• Aging

The prime cause of Infertility

The increased ROS, with the decreased antioxidant defense, leads to redox imbalance, reduced motility of sperm, and sperm DNA damage which is considered as the primary cause of infertility. Spermatozoa is a place of rich mitochondrial concentration and therefore needs a constant supply of oxygen; hence spermatozoa can be imagined as a region of the O2 paradox and an apparent production of ROS in it. The moderately-elevated concentrations of hydrogen peroxide do not affect sperm viability but cause sperm immobilization. The presence of huge amounts of polyunsaturated fatty acids in the plasma membrane and cytoplasm is also the leading cause of the vulnerable nature of spermatozoa. Oxidative damage causes base degradation, DNA fragmentation and cross-linking of proteins which fails to fertilize the oocyte and result in infertility. 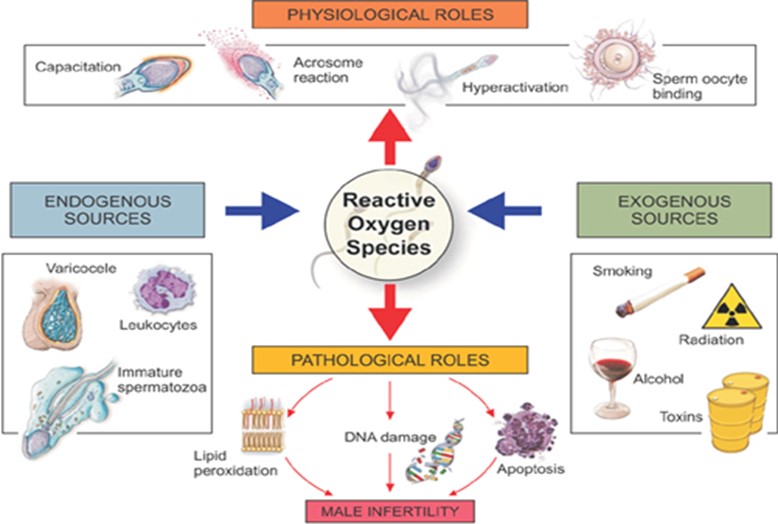 In normal conditions, the male reproductive system balances between ROS production and antioxidant activity. The problem arises when the ROS gets overproduced due to certain intrinsic and extrinsic factors. The OS elevates the sperm chromatin or DNA damage. The antioxidant therapy can improve sperm motility and hence improves the male fertility by reducing oxidative stress. OS are the leading cause of idiopathic infertility. Determining the structural and functional changes of the sperm membrane lipids during the process of peroxidation can be useful in understanding the role of lipid metabolism in spermatozoa physiology and may help to develop novel therapeutic approaches for male infertility.