Gene therapy, the science of gene transfer is rapidly emerging as an effective technique to treat patients with a wide range of diseases including cancer, resulting in long-term therapeutic effects. Severe adverse effects were encountered in early clinical studies, but the continuous advancement fueled the research that led to a more efficient gene transfer. The therapeutic efficacy in clinical studies conducted in the academic setting led to the development of gene therapy in an accelerated manner. It offers a promising approach to cure rare inherited diseases by inserting the gene of interest with the help of a vector. One of the main focuses of this technique is the optimization of delivery vehicles (vectors) that are mostly plasmids or viruses. Though viral vectors are superior in terms of efficient gene transfer, it has faced a number of setbacks in trials such as insertional mutagenesis by integrating viral vectors, inappropriate expression of the transgene in unwanted cell types or conditions, and immune activation against the viral vector, the gene-engineered cells or the transgene product. Moreover, the high production cost makes the scientists shift towards non-viral gene therapy. The use of non-viral gene delivery approaches in conjunction with the latest generation transposon technology has successfully overcome some of these limitations.

Transposons were once considered as “junk DNA” or “selfish DNA” but with time, they became one of the most important regulatory elements in the genome. Nobel laureate Barbara McClintock named them “controlling elements.” Later, others called them “jumping genes.” Today, they are usually referred to as transposable elements that can move between different positions in a genome. By whatever name, they now appear to play a larger role in biology than simply occupying the space. A scientist named Craig once said that transposition is instrumental to evolutionary change. Transposons are mobile genetic elements that can move around to different positions in the genome and may cause mutations that contribute greatly to genetic diversity, which is the substrate for evolution. “Transposable elements are natural genome engineers,” she said.

What are Transposable Elements?

Transposons or transposable elements (TE) are mobile regions of DNA that can change their position in the genome. DNA transposons rely on a transposase enzyme to cut the TE from the donor site and insert it at the receiving site in a ‘cut and paste’ like manner. The transposase gene is the trans-acting element of the transposon system. The cis-acting element is a pair of inverted repeats at either end of the gene which are the target sites for the transposase as well as associated enhancers and promoters. Transposons can be of two types: i) DNA transposons that move directly as DNA and ii) Retrotransposons that undergo transposition via an RNA intermediate. Consequently, to turn DNA transposons into a gene delivery tool, a binary system has been developed which is composed of (1) an expression plasmid that encodes the transposase and (2) a donor plasmid containing the DNA to be integrated, which is flanked in cis by the transposon terminal repeat sequences required for transposition. The transposase binds these terminal repeat sequences and catalyzes the excision of the gene of interest from the donor plasmid as well as its insertion into the genome of the host cell.

A first step in manufacturing clinically relevant transposon was achieved by molecular reconstruction of a synthetic, active Tc1/mariner-type transposon called Sleeping Beauty (SB). Until now, 3 transposon systems have the potential to be developed into a gene therapy vector: SB, Tol2, and piggyBac (PB).

Sleeping Beauty transposon, the first man-made transposon, developed in 1997, was named as SB10. It is based on the consensus sequence of members of the mariner/Tc1 family isolated from Salmonid fish. Due to the high mutation rate, they were inactive for a long time. Approximately 3% of the human genome is made up of SB transposon, among which 20000 inactive Tc1/mariner type of TEs are present. The mechanism of transposition is similar to all other natural transposons. The transposition process can be divided into at least four major steps: (1) binding of the transposase to its sites within the transposon inverted repeats (IR) (2) formation of a synaptic complex in which the two ends of the elements are paired and held together by transposase subunits (3) excision from the donor site and (4) reintegration at a target site. It is safer than virus-based gene therapy. Gene editing through the CRISPR-CAS9 is a tedious job but the SB system-based gene editing is simpler yet effective. The SB system is a powerful and reliable tool for gene therapy as it has the ability to express at the target site at the right level, for the right amount of time. Due to the success of this system, it was awarded as “Molecule of the Year” in the year 2009 by the International Society for Molecular and Cell Biology and Biotechnology Protocols and Research (ISMCBBPR).

Another recent addition to the transposon family is Tol2. Tol2 is a naturally occurring, hAT superfamily fish transposon that shows activity in a wide range of vertebrate species, including human cells. Tol2 transposon has the potential to carry large inserts in comparison with the possible size limitation observed in a Tc1/mariner-type transposon.

The piggyBac system, derived from the cabbage looper moth Trichoplusia ni, represents an alternative and a safer transposon for gene transfer into mammalian cells. These transposable elements were initially discovered in mutant baculovirus strains; hence their name is “piggyBac”. The mechanism is similar to SB transposon but piggyBac has proved to be an efficient tool for gene delivery and has a slightly higher chance of site-specific integration compared to SB system. Additionally, piggyBac has the ability to integrate near the transcription start sites and within long terminal repeats as compared with SB. More importantly, the lack of overproduction inhibition makes piggyBac a preferable choice for gene therapy studies. The piggyBac transposon can be used with CRISPR/Cas9 system to efficiently perform gene transfer in animal models or cell-lines, including stem cells, without leaving behind any accessory DNA sequences. 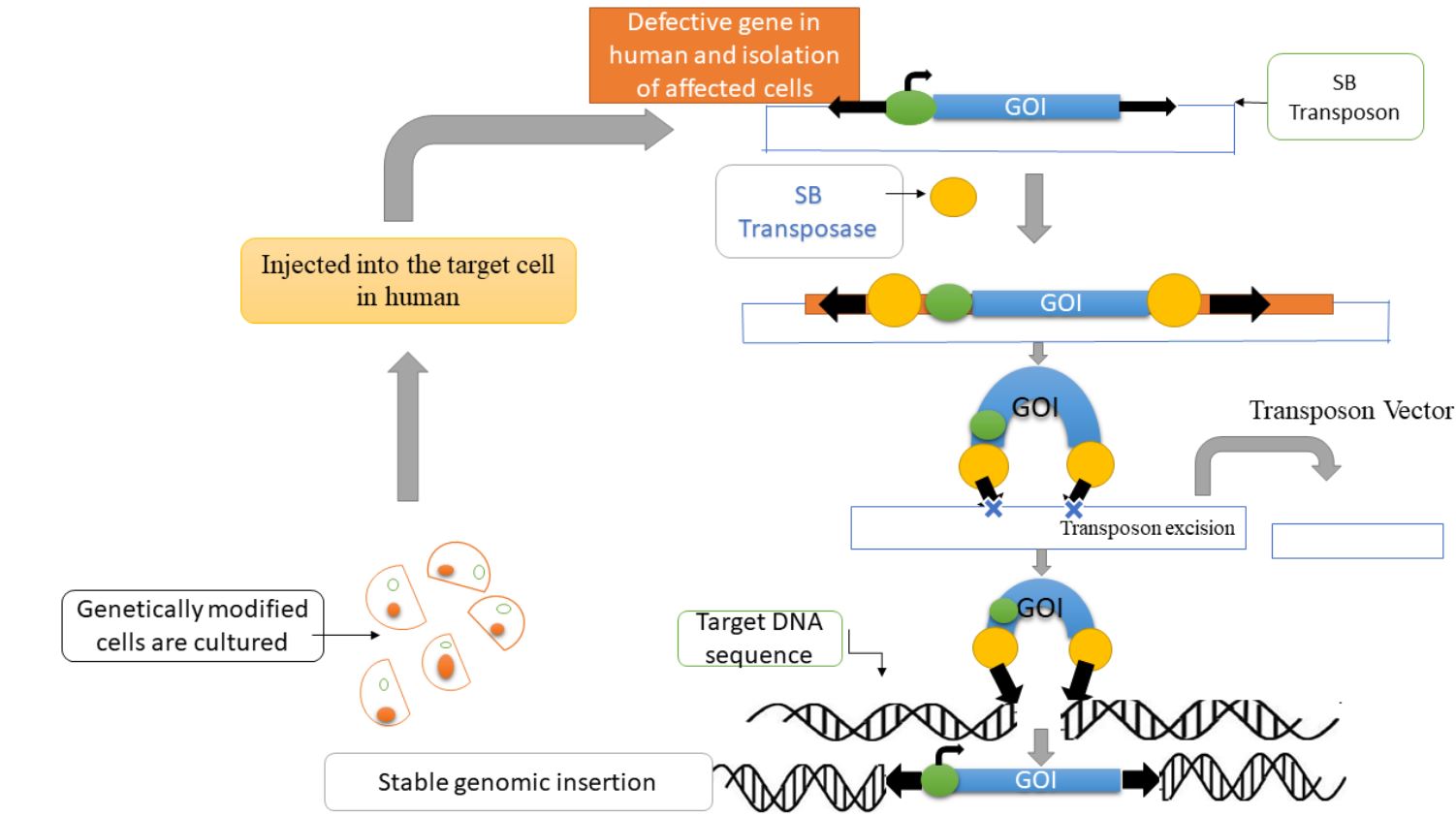 The first-in-man transposon-based gene therapy clinical trial was approved by The Recombinant DNA Advisory Committee recently approved in 2008. In this trial, T cells genetically altered with the use of SB transposons will be transferred for adoptive CAR-T cell immunotherapy into patients with CD19+ B lymphoid malignancies. These transposon-modified T cells exhibit specific cytotoxicity towards CD19+ lymphoid tumors and significantly reduced tumor growth and improved survival after adoptive transfer in tumor-bearing mice. Also, the production of potent CAR-T cells using piggyBac is simple and cost-effective, and it may enable wider access to CAR-T cell therapy. Several recent studies have demonstrated the introduction of reprogramming genes into induced Pluripotent Stem cells (iPS) using PB system which can be a remarkable approach to treat genetic or degenerative diseases since iPS cells are able to differentiate into ectodermal, endodermal and mesodermal lineages. Also, SB-based gene therapy can be used as a treatment in Alzheimer’s Disease. The trials are now in the pre-clinical stage.

Transposon based gene therapy is desirable due to low production cost, accommodation of large inserts of DNA and precise integration. The gene transfer is relatively faster, and it does not trigger adverse immune responses. Therefore, SB and PB systems have been developed as the leading non-viral vector for gene therapy with long term gene expression.

Long term expression of the transposase gene can result in the transposon being excised and reinserted in a different location what is known as “re-hopping”; hence there is still a chance of insertional mutagenesis. Unlike SB, PB transposon has a specific integration pattern and uncontrolled transposition can lead to increased genotoxic risk. The making of designer transposases is a challenging approach in the field of gene therapy. This could potentially be accomplished by engineering chimeric transposases fused to heterologous site-specific DNA-binding domains but not all the transposases can tolerate C or N-terminal fusions. Overproduction inhibition that is an increase in the amount of transposases which can be due to improper folding at high concentration, results in transposition inhibition.

The continued advancement of this transposon-based technology is paving the way towards novel clinically relevant gene therapy strategies. Although the SB based gene therapy was a success, the aforementioned limitations must be resolved by creating hyperactive designer transposases. Previous clinical trials are undoubtedly resulting in a better implementation of this technology. Many challenges still lie ahead of us, including addressing genotoxicity from integrating gene delivery vectors or off-target genome editing, improving gene transfer or editing efficiency to levels necessary for effective treatment of many diseases and reaching a societal consensus regarding contentious issues such as the ethics of germline editing and payment for expensive curative therapies. The journey from the “junk DNA” to the “Molecule of the Year” is indeed a long “jump” and this completely justifies the name of these genetic elements and hopefully, they are going to prove more significance in the treatment of life-threatening diseases in the near future.