Minimally invasive surgery, better known as “Laparoscopic Surgery,” is a specialized low-risk technique of performing surgeries. The operations in laparoscopy are performed generally in the pelvis or abdomen region with the help of small incisions (usually of 0.5 to 1.5 cm) with the assistance of a camera. Commonly used for gynecologic and gall bladder surgery in the past, this technique of surgery has expanded into intestinal surgery over the last decade.

How is laparoscopy performed?

A single large incision is made during the traditional “open surgery”, whereas the “laparoscopic surgery” takes the help of several smaller incisions for entering the abdomen. Each of these incisions is known as a “port” and at each port, a trochar (a tubular instrument) is inserted. Through these trochars, then passes a special camera called the “laparoscope” and other specialized instruments during the procedure. In this type of surgery, the patient is likely given general anaesthesia, meaning the patient would sleep through the procedure without any pain. Local anaesthesia is also used in certain cases in which the patient will be awake throughout the surgery without any pain being felt.

Towards the beginning of this procedure, the midsection or the abdomen is expanded with carbon dioxide gas with the help of a cannula for providing a viewing as well as working space for the surgeon. The laparoscope then sends pictures and videos from the abdominal cavity to monitors with high-resolution screens in the operation theatre. As the operation is carried out, the surgeon watches detailed pictures of the abdomen on the screen. This framework permits the surgeon to carry out similar operations like the ones in traditional surgery; however, with much smaller incisions. Also, laparoscopy is usually performed as an outpatient procedure, which means that the patient would be able to return home (most of the time) the same day as the surgery.

In specific circumstances a surgeon may decide to utilize a unique sort of port that is sufficiently large enough to insert a hand. The careful technique where a hand port is utilized is classified “hand assisted” laparoscopy. The cut which is required for the hand port is generally larger in size compared to other laparoscopic incisions but is normally smaller than the cut needed in case of traditional surgery.

Laparoscopic surgery or minimally invasive surgery holds numerous advantages over the traditional open surgery techniques:
• Smaller incisions made, hence smaller scars.
• Recovery time of the patient is fast as compared to traditional open surgeries, therefore requires a fewer day stay in the hospital.
• Comparatively lesser tissue cutting and bleeding.
• Less pain while the healing of scars leads to lesser use of medications to subside the pain.
• Small scar results in quick healing.
• External contaminants get reduced exposure to the internal organs, thereby reducing the risk of post-operative infections.
• Patients get back to normal life sooner. 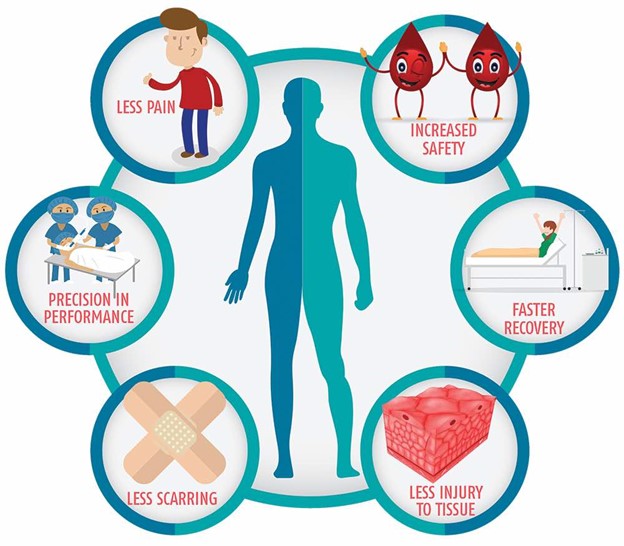 One of the rapidly developing fields that has the potential to represent the future of laparoscopic surgery is Single incision laparoscopic surgery (SILS). The significant advantage of SILS over the standard laparoscopic procedure lies in the cosmesis. SILS makes the surgery essentially scarless if the incision stays hidden within the umbilicus. Since only a single incision is required in this surgical procedure, therefore the potential risk of complications such as hematomas and wound infection and port site hernias are also greatly reduced. The TriPort system in SILS allows the passage of multiple instruments through a single port. To support SILS, a wide variety of new equipment have been developed and the range of different procedures amenable to this surgical technique is also increasing. As compared to the equivalent laparoscopic procedures, the duration of SILS is slightly longer. 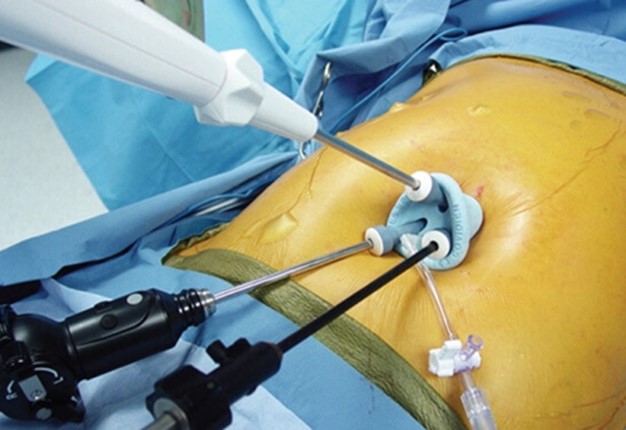 The benefits of minimally invasive surgery may decipher better care quality for patients and lead to expanded cost sparing through the presentation of dynamic improved recovery programs which are likely cost-effective from the viewpoint of the hospital medical services providers.