Concomitant Thrombotic Microangiopathy and Rejection in a Recent Kidney Transplant: A Case Study

Thrombotic microangiopathy (TMA) is an uncommon, life-threatening complication that adversely affects kidney transplant recipient and allograft survival. Post-transplantation TMA can occur as recurrence of the primary TMA or as a de novo condition. The latter can be triggered by numerous factors post-transplantation including calcineurin inhibitors, certain infections and antibody-mediated rejection. Rejection-associated TMAs carry a significantly lower graft survival rate compared with post-transplant TMAs that are not associated with rejection. In this case report, we present a rare case of rejection-associated TMA in a recently transplanted renal allograft that was managed in Al-Hada Armed Forces Hospital. Despite the poor expected outcome of this condition; the patient was successfully treated after early initiation of medical interventions. Transplantation teams may face many challenges managing such a combination of medical conditions, which may halt pursuing appropriate diagnostic and therapeutic measures in a timely fashion. This article highlights some of these challenges for better understanding of such a complex condition.

End-stage renal disease (ERSD) or kidney failure is a leading cause of morbidity and mortality worldwide [1]. Kidney transplantation is considered the treatment of choice for patients with ESRD [2]. Accumulating evidence has shown that kidney transplantation improves quality of life and survival rate for most patients compared to those maintained on dialysis [3]. However, there is a shortage of organs available for donation, which provided the incentive for the growth of the commercial kidney market. Kidney transplantation is expected to rise sharply worldwide in the next decade with the increased prevalence of the disease [1]. Despite the substantial reduction in the incidence of post-transplantation rejection in the past few decades, it remains a significant issue in commercial transplantation among other complications [4]. For instance, serological evidence of donor-specific anti-HLA antibodies (DSA), a main criterion for diagnosing antibody-mediated rejection (AMR), cannot be tested in most of the cases of commercial transplantation due to lack of donor information [5].

Thrombotic microangiopathy (TMA) is an uncommon adverse condition in kidney transplantation that may cause graft loss. TMA is characterized by the aggregation of platelets, thrombocytopenia and hemolytic anemia. It is a well-known complication that may occur post-solid-organ transplantation in the form of thrombotic thrombocytopenia purpura (TTP) or hemolytic uremic syndrome (HUS). TMA incidence post-transplantation is reported to be around 1.5%, with patient's mortality that can reach up to 50% [6, 7]. Post-transplantation TMA can occur either due to recurrence of primary TMA that caused initial kidney failure, or it may arise as a de novo clinical condition. Despite that patients with TTP are at high risk for recurrence, most of the post-transplant TMAs are attributed to de novo occurrence [6, 8]. De novo post-transplant TMA usually occurs one week after transplantation when patients are treated with high doses of immunosuppressant, wherein the incidence of de novo TMA is 4-15% in renal transplant patients treated with Cyclosporine, with 43% graft survival [9]. In fact, de novo TMA post-transplantation may occur due to several etiologies such as calcineurin inhibitors (CNIs) toxicity and AMR post-transplantation [8, 10]. In the latter case, diagnostic features such as intraluminal thrombi, C4d staining of peritubular capillaries and circulating donor‐specific antibodies are typical [11]. In this article, we describe a rare case of concomitant TMA and acute rejection highlighting the diagnostic and therapeutic challenges a medical team may face when these two conditions occur together.

The patient was diagnosed with TMA based on the features of thrombocytopenia, hemolytic anemia and presence of schistocytes in the peripheral blood smear. Plasma exchange was initiated and was continued daily with 1-1.5 plasma volume exchange with fresh frozen plasma. In addition, hemodialysis was initiated, and two units of blood transfusion were given. Regarding immunosuppression therapy, Cyclosporine was stopped with no substitution since both tacrolimus and mailman target of rapamycin (mTOR) inhibitors may aggravate the TMA. Since rejection was anticipated, the patient received five pulse doses of Methylprednisolone of 500mg daily for five days followed by high daily dose prednisone of 60mg. Mycophenolate mofetil of 1 mg twice a day was also started upon presentation.

Kidney biopsy was planned; however, due to critical thrombocytopenia, it was delayed until platelets count reached a safer level of 100 x103/L. At this stage, the daily plasma exchange continued. Eight days after the initiation of plasma exchange, a blood test was performed, and a biopsy was taken. Blood test upon performing the procedure were WBC 14.1 x 109/L, Hemoglobin 8.3 g/dl, platelets 102 x 109/L, Na 124 mmol/L, K 4.1 mmol/L, creatinine 680 µmol/L and HCO3 24 mmol/L with persistent schistocyte in the peripheral blood smear. Subsequently, anti-thymoglobulin antibody (ATG) therapy was started owing to platelets improvement.

The allograft biopsy showed positive C4d staining, severe acute rejection with moderate vasculitis (Banff v2) and a severe tubulointerstitial (i3, t3) component. The findings are consistent with acute severe antibody-mediated and T-cell mediated acute rejection. Remarkably, there were no signs of TMA in this biopsy sample (Figure 1). Subsequently, management of acute rejection for both cellular and humeral components was initiated. The patient received 5mg/kg total dose of ATG, as well as 10 gm intravenous immunoglobulins (IVIG) after each plasma exchange, in addition to four intravenous doses of 2.2 mg bortezomib on days 1, 4, 8 and 11. Daily Plasma exchange continued. 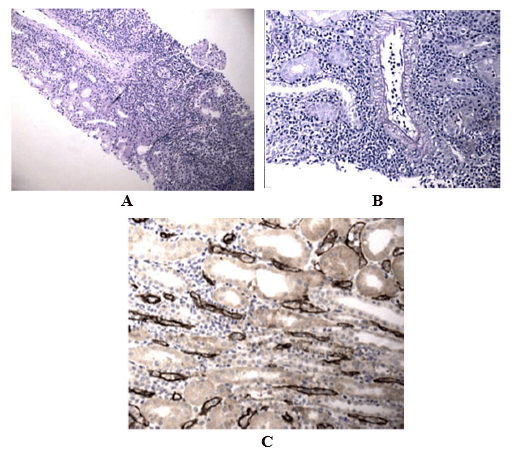 The patient’s clinical and biochemical markers improved gradually. His daily urine output improved from <100 ml/day to 1.5 L/d within three weeks. On day 20 after his admission, low dose Tacrolimus was safely introduced, targeting a level of 6-8 ng/ml, and prednisone tapering was commenced. Hemodialysis was stopped 11 days after initiation of anti-rejection management. In total, the patient received 18 sessions of plasma exchange, 70 grams of IVIG, four doses of bortezomib, five daily doses of 500mg pulse methylprednisolone therapy followed by oral prednisone 1mg/kg, and 5mg/kg ATG. Eight weeks after admission his creatinine stabilized at 160-180 µmol/l with an overall good clinical condition. The patient's creatinine 1 year after transplantation remained in 160-180 µmol/l range.

The vast majority of post-transplant TMAs are attributed to de novo disease [8]. The incidence of de novo TMA ranges between 4% and 15%, with 43% graft survival [11]. Causes of de novo TMA include CNI-associated, mTOR inhibitor-associated, AMR-associated TMA, in addition to other rare etiologies that include various medications and viral infections [8, 12]. Although the exact cause of TMA is not well identified in our case, the fact that TMA did not improve with cessation of Cyclosporine, nor did it react to Tacrolimus introduction, making AMR the most likely etiology.

TMA manifest with hemolytic anemia and thrombocytosis, as well as the presence of schistocytes in the peripheral blood film. Plasma exchange is the cornerstone of management for TMA, and it is also a part of the therapy for AMR. In fact, graft loss rate can be as high as 60-100% in post-transplant TMA without plasma exchange [13]. However, severe thrombocytopenia due to TMA when combined with AMR may significantly delay the management and impose some modifications to standard management of rejection. In our case, since the patient presented with severe thrombocytopenia, the kidney biopsy was delayed for several days until platelets count reached a a relatively safer level greater than 100,000 x 109 per liter. Similarly, empirical management of rejection with ATG was delayed to avoid further thrombocytopenia induction. Besides, optimization of immunosuppression medication was challenging since Cyclosporine, Tacrolimus, and Sirolimus are reported to provoke TMA reaction. This delay in diagnosing and managing such a serious condition might adversely affect both patient and graft survival. The long-term effect of such concomitant conditions was studied in an eight-year follow-up retrospective observational study [14]. This study showed that the death-censored graft survival at eight years was significantly lower in concomitant TMA and AMR patients compared to TMA patients who didn’t have AMR at that time (28.0% vs 68.2%, p-value 0.01). However, the favorable outcome in our case is probably attributed to the early initiation of plasma exchange and avoidance of TMA-inducing medications.

Several reports have suggested that switching to another CNI or mTOR in CNI-induced TMA can be safely commenced. However, we opted to keep the patient off any medication that is known to induce TMA until his thrombocytopenia improves significantly [15-17]. For instance, Zarifian et al. observed that replacing Cyclosporine with Tacrolimus is the most successful strategy for good graft function in 16 patients with Cyclosporine-induced TMA [17]. The authors showed that only 3 of these 16 patients required dialysis, while renal grafts were functioning well within one year of the TMA episode in 13 out of these 16 (81%) patients in whom Cyclosporine was replaced with Tacrolimus [17]. Moreover, Satoskar et al. showed that permanent or temporary discontinuation of Cyclosporine did not influence graft outcome [18].

TMA may involve the kidneys forming fibrin thrombi in glomeruli or small arteries and arterioles, intra-capillary accumulation of erythrocytes and red cell fragments, endothelial cell swelling and detachment from the basement membrane, and/or onion-skin hypertrophy of the arteriolar walls. However, TMA may present with systematic features without any focal involvement. In this patient, the biopsy was delayed for several days due to thrombocytopenia. Meanwhile, the patient received a considerable number of plasma exchange sessions prior to the biopsy. Nevertheless, renal involvement couldn’t be totally excluded based on the absence of TMA features in his delayed biopsy.

Post-transplant TMA is a life-threatening condition that can affect graft and patient’s survival alike. When TMA is associated with rejection this can halt the diagnosis and management of such a severe condition. Medical teams treating such cases should have a high index of suspicion of this disease and avoid delaying the management as possible, Similarly, the medical team should be cautious to avoid potential harm from interventions that may increase clinical risk. For example, despite the high risk of the patient, we delayed kidney biopsy due to thrombocytopenia while initiating plasma exchange, and we opted to keep the patient off any medication that is known to induce TMA until his thrombocytopenia improves.

Ethical approval was obtained from the Research Ethics Board at Al-Hada Armed Forces Hospital.

Informed consent was obtained from the patient prior to writing this report.

© 2021 Muhammad A. Bukhari. This is an open-access article distributed under the terms of the Creative Commons Attribution License, which permits unrestricted use, distribution, and reproduction in any medium, provided the original author and source are credited. Hosting by Science Repository. All rights reserved.
DOI: 10.31487/j.TCR.2020.01.01