C1-C2 Subluxation after Mild Cervical Spine Trauma in a Child

We report a case of a seven-year-old girl who presented with a “Cock-Robin” head tilt and cervical spine injury after falling from her bed. Initial cervical spine X-ray reported a fractured clavicle. However, almost four weeks later, the torticollis had not resolved. Computerized tomography (CT) of the cervical spine revealed subluxation of the atlanto-axial joint at C1-C2. Cervical spine magnetic resonance imaging (MRI) did not show any spinal cord injury. Manual reduction and hard collar placement were attempted, yet C1- C2 subluxation recurred. The child was placed into halo traction and then into a halo vest. CT scan showed near complete resolution of C1-C2 subluxation. Three months later the halo device was removed, and the patient was placed in a hard cervical collar then transitioned into a soft collar over a four month period. During this time, the patient received physical therapy. Final cervical spine radiographs revealed proper cervical spine alignment and resolution of C1-C2 subluxation.

Atlanto-axial (C1-C2) subluxation describes the misalignment of the C1-C2 vertebrae that may impair cervical rotation or movement. While this usually occurs from cervical spine trauma, Grisel’s syndrome (GS), rare and usually nontraumatic, induces C1-C2 subluxation from surrounding soft tissue inflammation after infection [1]. Patients are overwhelmingly pediatric, with 90% under twenty-one and of those, approximately 68% under twelve [2, 3]. Children are more vulnerable due to their larger head size, more flexible joints and ligaments, shallow and more horizontally positioned facet joints, more retropharyngeal lymph nodes, and generally richer lymphatic systems [4]. Patients tend to have a history of head or neck infections or may have had recent maxillofacial or otorhinolaryngology procedures [1]. Moreover, they may also have conditions that induce ligamentous laxity and affect spinal stability, such as Down syndrome, Marfan’s syndrome, Klippel-Feil syndrome, osteogenesis imperfecta, and neurofibromatosis [1, 5, 6].

Regardless of etiology, the majority present with persistent torticollis, sometimes painful, along with neck stiffness and headaches [4, 7]. They may have an abnormal head posture, or “Cock-Robin” tilt, in which the chin is rotated or turned to one direction while the neck is tilted to the opposing side [4]. However, early signs of C1-C2 subluxation may only show slight rotational deformity of the atlanto-axial joint as described by the Fielding and Hawkins’s graded classification (Figure 1) [8]. As a result, even with imaging, physicians may disagree on the presence of atlanto-axial subluxation, leading to delayed treatment and prolonged suffering. 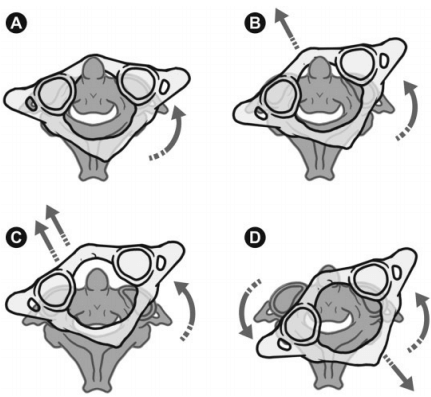 We report a seven-year-old girl who presented with headache, neck pain, and the inability to straighten her head into a neutral position. Her parents reported a fall out of bed to her pediatrician. The child was initially referred to an orthopedic surgeon. A cervical spine X-ray series only reported a fractured clavicle (Figure 2). A few weeks later, when the torticollis had not resolved, computerized tomography (CT) of the cervical spine was recommended by pediatric neurosurgery in the emergency department (ED). Three-dimensional (3D) reconstruction imaging of the cervical spine revealed atlanto-axial subluxation (Figure 3). Magnetic resonance imaging (MRI) of the cervical spine the next day was unremarkable and demonstrated an intact spinal cord with no inflammation. 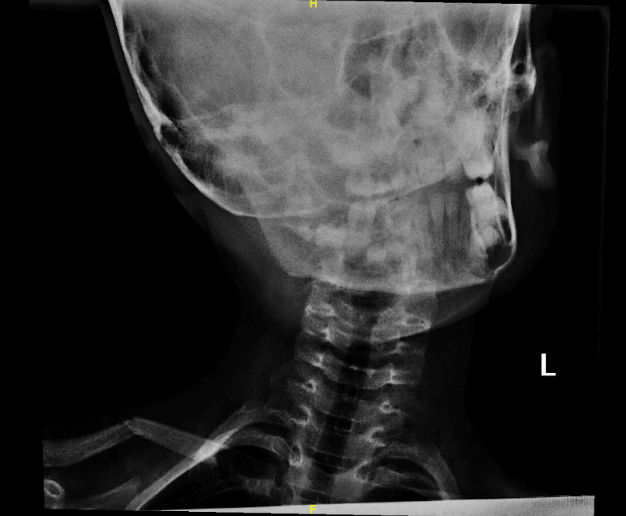 Figure 2: Image of cervical X-ray of patient upon presentation to ED. While read as unremarkable except for a fractured clavicle during the time, it is quite clear that atlanto-axial subluxation is present, as indicated by the quite prominent “Cock-Robin” head position.

Following the confirmation and diagnosis of C1-C2 subluxation, the patient was manually reduced and placed into a hard, Miami J collar. Muscle relaxants were started, and the child was admitted to the pediatric hospital. The following day, re-subluxation was clinically apparent. A second manual reduction was performed. When subluxation recurred and a third attempt at stabilization in a hard collar failed, the child was placed in halo traction. Within three days, at approximately five pounds of traction, the C1-C2 subluxation resolved on cervical spine X-rays. A CT study confirmed near-complete resolution of C1-C2 subluxation.

After halo removal approximately three months since it was placed, the patient was placed into a hard cervical collar for two months and then a soft collar for two months. During this time, the patient was referred to physical therapy, which continued after the soft collar was discontinued. Follow up radiographs five months and nine months after the incident confirmed proper cervical spine alignment and the resolution of subluxation (Figure 4). 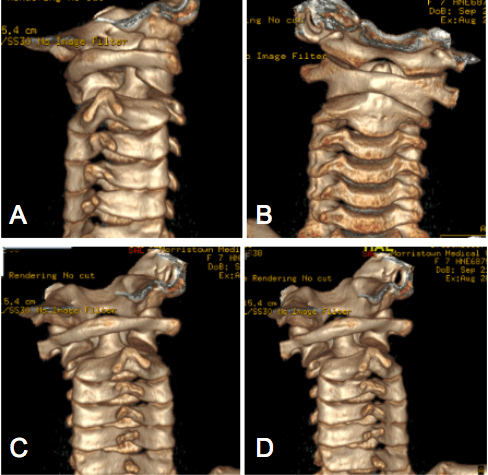 Figure 3: Images of patient cervical spine from preoperative 3D reconstructive CT scan. (A, B, C & D) From the different views above, it is clear that the patient has C1-C2 subluxation as can be seen by the misalignment of the atlanto-axial joint that slides from the neutral position. 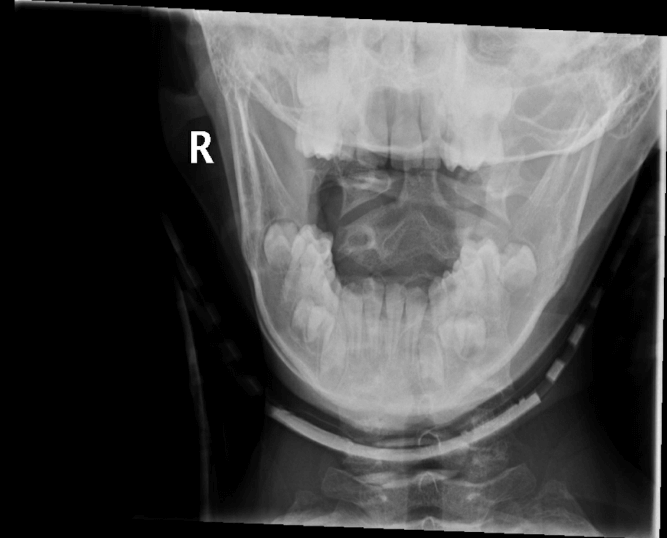 Figure 4: Image of open mouth odontoid radiograph of patient. In comparison to the pre-treatment images, this most recent image confirms the complete resolution of C1-C2 subluxation. The head and neck are in the neutral position and can be moved with ease.

While CT remains the optimal cervical spine imaging technique, its high levels of radiation present a concern, especially for pediatrics, due to the thyroid’s proximity to the atlanto-axial region. Interestingly, modalities with minimal or no radiation, like cervical spine radiography and MRI, have been used to examine potential C1-C2 subluxation. However, these methods have limitations and may miss C1-C2 subluxation. Thus, physicians must comprehend the risks and benefits for each imaging technique to detect atlanto-axial subluxation while limiting radiation exposure.

Compared to CT scans, a five-view cervical spine X-ray series has ten to fourteen times lower radiation dosage to the skin and thyroid [9]. A variety of angles is required for adequate visualization of the bony contours of the cervical spine, including lateral, anteroposterior, and open-mouth views [10]. Radiography’s sensitivity of around 90% for detection of bony cervical spine injuries makes it an adequate screening method for patients who show no apparent neurological abnormalities [11]. However, the popular cervical spine imaging modality remains the CT scan, with a 98-100% sensitivity for detecting cervical spine injury [9, 11]. By defining the location and orientation of displaced bone relative to the spinal canal, CT scans’ high resolution allows for accurate cervical spine abnormality detection.

This case report demonstrates that for pediatric patients with neck pain and risk of atlanto-axial subluxation and/or instability, CT should be used first [11]. By missing the critical diagnosis of C1-C2 subluxation by using a radiograph, there was delayed diagnosis and treatment. Nonetheless, cervical spine X-rays ensured optimal spine and halo positioning as well as monitored treatment progression due to its lower radiation dosage [12]. Overall, CT scans possess the greatest imaging to detect cervical spine instability and subluxation in comparison to radiography and MRI. However, it should be used conservatively, particularly in the pediatric population and in cases with severe symptoms and high suspicion for subluxation.

Atlanto-axial subluxation, the imperfect alignment of the C1-C2 vertebrae, results from cervical trauma or precipitates from infection and inflammation as described by GS. It remains imperative that C1-C2 subluxation be diagnosed early to prevent further suffering and physical and neurological damage. We recommend that a CT scan be the imaging modality of choice to detect atlanto-axial subluxation. However, CT scans must be used sparingly, especially in pediatrics, due to its relatively higher dosage of radiation compared to other imaging methods. After confirmation of subluxation, the use of other imaging tools with less radiation, such as radiographs, should be used to monitor treatment progress. Concerning treatment, we recommend reduction following conservative treatment with a hard cervical collar. However, when these methods prove unsuccessful, halo traction and the use of a halo vest immobilization may be necessary. If non-operative treatment fails, cervical spine internal reduction and fixation to correct C1-C2 subluxation should be considered.

We acknowledge the New Jersey Pediatric Neuroscience Institute for introducing us to this case report and its connections with surrounding physicians relevant to this case.

© 2019 Isabel Snee. This is an open-access article distributed under the terms of the Creative Commons Attribution License, which permits unrestricted use, distribution, and reproduction in any medium, provided the original author and source are credited. Hosting by Science Repository. All rights reserved.
DOI: 10.31487/j.SCR.2020.07.17

Figure 2: Image of cervical X-ray of patient upon presentation to ED. While read as unremarkable except for a fractured clavicle during the time, it is quite clear that atlanto-axial subluxation is present, as indicated by the quite prominent “Cock-Robin” head position.

Figure 3: Images of patient cervical spine from preoperative 3D reconstructive CT scan. (A, B, C & D) From the different views above, it is clear that the patient has C1-C2 subluxation as can be seen by the misalignment of the atlanto-axial joint that slides from the neutral position.

Figure 4: Image of open mouth odontoid radiograph of patient. In comparison to the pre-treatment images, this most recent image confirms the complete resolution of C1-C2 subluxation. The head and neck are in the neutral position and can be moved with ease.