Skip to content
Home
/
Bioterrorism: Is the Threat Real?
Blog

Global events of the last two decades have made us realize that bioterrorism is not a myth but a harsh reality. It poses a major threat to world security and its effects can be detrimental to the public healthcare system. Science is rapidly emerging with its new discoveries but the misuse of the results of the scientific research by powerful countries is rising simultaneously, which has led to biological agents becoming deadly bioweapons that threaten both national security and national and public health. The successive outbreaks caused by newly recognized, drug-resistant pathogens and the fear that high-consequence pathogens might be used as bioweapons demonstrate the need to enhance the capacity in clinical and public health management of highly infectious diseases. Incredibly rapid changes in genetic modifications in biotechnology make it easier for terrorists to overcome the barriers that inhibited the acquisition of biological weapons in the past.

A Brief History of Bioterrorism

Bioweapons have been a threat to humans for many centuries. The 2001 Anthrax attack in the U.S., in which letters laced with Bacillus anthracis spores were mailed to U.S. government officials, is no doubt one of the most famous examples of past bioterror attacks. The threat of bioterrorism has been catching the attention of Indian defense and medical experts for a long time. The plague outbreak in Surat and Beed in 1994 caused numerous deaths and sizeable economic loss which created a long-lasting fear among the population of this country. The origin of the outbreak is still controversial.

The advancement of genetic engineering and synthetic biology techniques enables the creation of new pathogenic microorganisms by genetic manipulation. Initially, it was believed that cutting-edge work and high-throughput technologies such as targeted genetic modifications of microorganisms are unreachable to those who want to misuse these technologies. However, as these technologies have progressed, they have become far cheaper and more accessible. One of the real concerns is the ability to recreate known viruses in the lab because a very little amount of knowledge and expertise can easily make a deadly virus with increased virulence, survivability and drug-resistance. These are referred to as next-generation bioweapons. Toxicity, undetectability and capacity to reproduce rapidly make biological weapons a weapon of choice for terrorists. The agent should possess the following features to be a perfect bioweapon:
i. Highly infectious.
ii. Long shelf life and stable on storage.
iii. Rapid production in large quantities.
iv. Highly resistant to environmental conditions.
v. High morbidity and mortality.
vi. Potential for easy transmission.
vii. Lack of rapid diagnostic methods.
viii. Lack of universally available effective vaccine.
ix. Potential to cause panic.

According to the Centers for Disease Control and Prevention (CDC), bioterrorism is a deliberate use and intentional release of pathogenic strains of microorganisms such as bacteria, viruses, or their toxins to spread life-threatening diseases in order to devastate the population of an area. The CDC characterizes bioweapons into 3 categories according to the severity of impact they would have if released during a bioterror attack.

Category C: Third highest priority agents that could be engineered for mass dissemination in the future. It has the potential for high morbidity and mortality rates. Example: Nipah virus and Hantavirus. 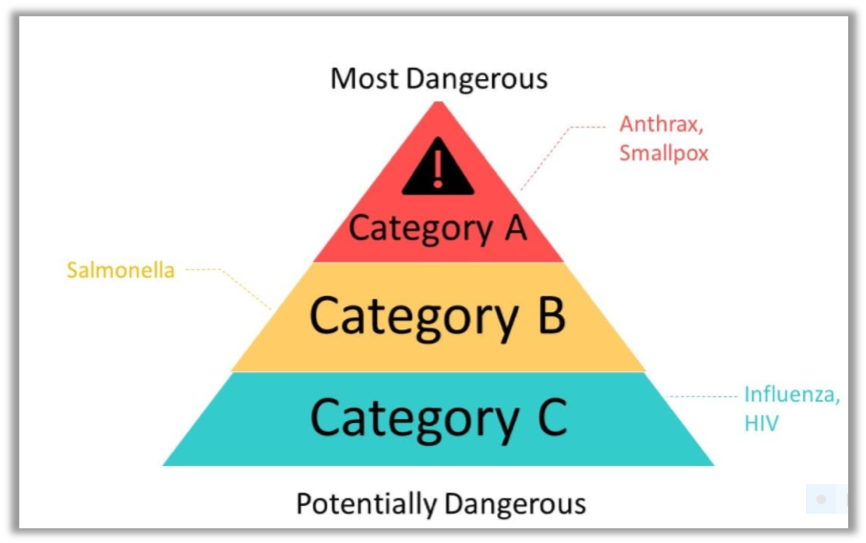 The mode of attack depends upon the type of agents used. The routes of entry of pathogens are mainly through inhalation, skin contact or through the gastrointestinal tract. The agents can be aerosolized and distributed among a large population to diminish the area. The food and water contamination with toxins and pathogens or deliberate infiltration of infected animals, pests or vectors through the borders could be other modes of attack. The biological weapons can be delivered via sprayers, by an individual, book or letter, guns, remote control or by using robotic technologies.

With the advent of recombinant DNA technology, the genetic makeup and the features of pathogens like virulence, resistance, survivability under harsh conditions can be improved and this can enhance the production and accessibility of bioweapons. These factors could create greater public panic. Due to the multidisciplinary nature of the field, bioterrorism countermeasures require the skills of experts with vastly different backgrounds and knowledge bases. Studies say that we are not well-prepared for a bioterror attack. The responsibilities of the public health department include rapid detection of the pathogen, identification of the route of transmission and development of control and prevention strategies. The multilevel approach should include legal deterrence, surveillance, medical management, and dissemination of information to the public. Since a bioterror attack is a low-risk, high-impact event, early recognition of specific agents and effective preparedness are essential for the management of an attack.

The Future of Bioterrorism

The big question is whether the threat of biological weapon use is real or a product of fearful future thinking? We are passing through a time where innovation is the key to survival. But as far as terrorist groups are concerned, they not only wish to survive but endeavor to thrive with continuous innovation and improvisation. Under this situation, all countries should join hands to fight against the looming threats of bioterrorism. Timely surveillance, proper training of medical personnel, development of new rapid test methods, investigation of therapeutic drugs, investigation of the need for specialized hospital centers with specially trained personnel to handle bioterrorist attack victims and a strong communication network can make the situation a little better. On the other hand, scientists should apply the necessary safety precautions in their work.

The threat of bioterrorism is, at present, a widespread alarm. The government should take stern action against the threats of bioterrorism and the threats must be integrated into preparedness plans. The attack of biological agents can be further minimized with reliable intelligence and effective response. To be prepared in a responsible way, we need a paradigm of scenario to be strictly followed. Proper assessment of the situation, establishment of an action plan with the help of healthcare personnel and implementation of the plan in a structured way by alerting the hospitals and public will be a realistic response strategy.