A few days back, the Singapore Food Agency (SFA) approved the sale of a lab-grown meat product. This is the first time that cultured meat has been cleared for sale anywhere in the world. The product approved by the SFA is cultured chicken, produced by US-based East Just. The development has been hailed as a landmark moment across the meat industry. Replacing conventional cattle farming with 'labriculture' – meat grown in the lab in bioreactors using in vitro cell culture of animal cells instead of from slaughtered animals, a form of cellular agriculture, has in the recent years been widely discussed as a way of reducing this environmental impact.

Meat production's footprint on natural resources is an accepted issue. The Food and Agriculture Organization (FAO) of the United Nations says the livestock sector "is increasing pressure on ecosystems and natural resources" and "in some cases its impact on ecosystems is out of proportion with the economic significance of the sector." The FAO also estimates that 26% of the earth's land that is not covered in ice is used for livestock grazing, and that 33% of all crop lands are used to grow crops to feed to livestock that are fed to people. As consumers are committing to eating healthier, both for themselves and the planet, environmentally sustainable diets consisting of meat alternatives and/or plant-based meat products (like soy or pea protein) are becoming increasingly popular. The most often ultra-processed nature of plant-based meat and consequently very high levels of sodium and saturated fats makes lab-based meat a healthier alternative.

In vitro meat production is a novel idea of producing meat without involving animals with the help of tissue engineering techniques. This biofabrication of complex living products by using various bioengineering techniques is a potential solution to reduce the ill-effects of current meat production systems and can dramatically transform traditional animal-based agriculture by inventing “animal-free” meat and meat products. Nutrition-related diseases, food-borne illnesses, resource use and pollution, and use of farm animals are some serious consequences associated with conventional meat production methods. This new way of animal-free meat production may offer health and environmental advantages by reducing environmental pollution and resource use associated with current meat production systems and will also ensure sustainable production of designer, chemically safe, and disease-free meat as the conditions in an in vitro meat production system are controllable and manipulatable. In the 2010s, owing to concern over global warming, human population size, and major investments by companies such as Impossible Foods and Beyond Meat, there was an increase in awareness and the market size for meat analogues in Western and Westernized markets. In 2020, the market value of meat substitutes in the U.S. is estimated to be worth 12.85 billion U.S. dollars, and is forecast to reach 35.5 billion U.S. dollars by 2027.

Cultured meat goes by many names: cell-based meat, cell-cultured meat, lab-grown meat, and “clean” meat. At the end of the day, all these designations refer to the same thing – growing a full piece of meat from animal cells in a lab (picture below). These meat cells start from animal stem cells, a specific type of cell that can give rise to many other kinds of cells. After the stem cells are harvested, they are incubated in a nutrient-rich broth. Cells multiply, divide and begin development into muscles cells. After a time, these cells will start to rearrange themselves into small fibers, then grow into cylinders, then form into a ring of tissue. The tissue arranges into strands, which can have more than a trillion cells each. Finally, many strands are layered together to produce a finished product, such as a burger patty. 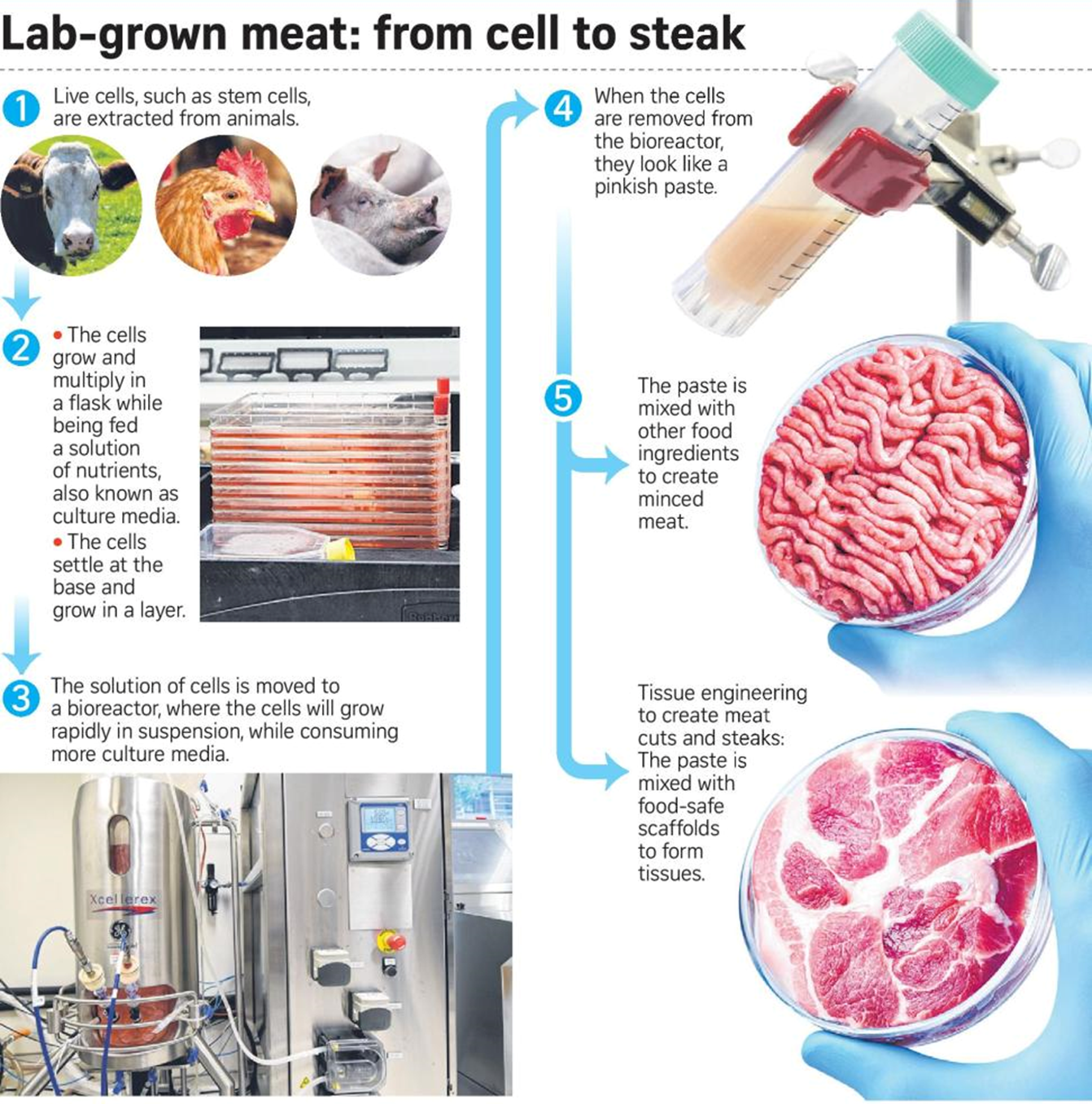 Cultured meat may be designed to be better for health than conventional meat. Because the meat is grown a piece at a time through the expression of different genes, scientists are currently working to control fat expression (thereby decreasing saturated fats and increasing omega fatty acids) and other aspects to make cultured meat healthier than farm-raised meat.

Despite the plethora of upsides there are some potential pitfalls of labriculture. It has been noted that cell-based meat may end up not being as rich in iron as conventional meat, since lab-based meat does not use blood to exchange oxygen. Secondly, though cell-cultured meat may be theoretically more environmentally friendly because it could decrease natural resource usage and lower demand for livestock animals, critics believe that the energy put into producing lab-based meat on a larger scale may be just as high. Thirdly, theoretically, this system is believed to be efficient enough to supply the global demand for meat; however, establishment of a sustainable in vitro meat production would face considerably greater technical challenges and a great deal of research is still needed to establish this animal-free meat culturing system on an industrial scale. Fourthly, cultured meat production will likely require more industrial energy than do livestock to produce equivalent quantities of meat. This is because it does not use animals whose bodies provide temperature regulation, waste elimination and other functions that will have to be replaced by industrial equivalents. However, there could still be large environmental rewards – a potentially large reduction in greenhouse gases with cultured meat compared to raising cows and sheep for meat.

Last but not the least, it will be difficult to be established in developing countries since the cost of maintaining a lab is too high for a developing country. Also, apart from ensuring that the products are affordable, currently still a challenge, and dealing with consumer mistrust, producers of alternative meats will face resistance from traditional meat producers. While the signs are promising, for now, it seems there are few technological and marketing hurdles to overcome before cultured meat will be feeding people at scale in future.