If there had been a competition about who is the smartest living entity of all, no doubt “Microbes” would be winning it. Despite their tiny size, they are way ahead of the multicellular organisms in carrying out complex metabolism and even adapting to extremely stressful environments. One such ability corresponds to the microbe becoming resistant to drugs that are meant to kill it.

The ABC of Antibiotic Resistance!

Antibiotics are drugs which have bacteriostatic or bactericidal properties and are prescribed to treat any type of bacterial infection. Antibiotic abuse, where an individual takes an incomplete or an indiscriminate dose of these medications, can contribute to the antibiotic becoming less effective to that bacterium leading to the development of resistant strains. The term “Resistance” means that a micro-organism that was susceptible to a drug earlier is no longer affected by the same. Bacteria capable of resisting antibiotics are able to survive and spread these traits via horizontal gene transfer. Treatment of antibiotic-resistant strains is not only troublesome but also sometimes impossible in severe cases making it one of the most life-threatening health issues in the 21st century, globally.

What do the Statistics Tell?

Statistics reveal that 33ooo people die each year from an infection caused by bacteria that are resistant to antibiotics. Self-medication, which means treating a condition by the use of any drug or medical product without following the recommendations of a medical professional or without a prescription, is one of the greatest causes leading to the development of antibiotic resistance. According to a survey carried out in 2018, it is estimated that by the year 2050, one person could die every 3 seconds if the hurdle of antibiotic resistance is not tackled soon. 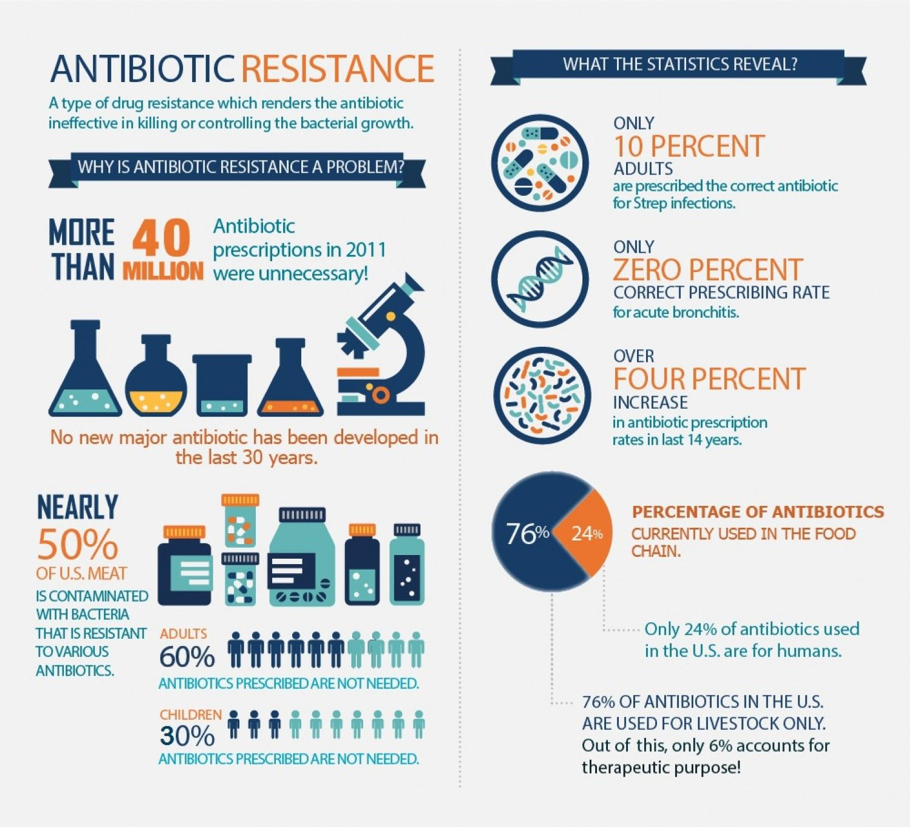 A significant number of pathogenic bacteria related to epidemics have advanced into multidrug-resistant (MDR) forms following antibiotic administration. The ones which are extensively drug resistant (XDR) or totally drug-resistant (TDR) are sometimes referred to as superbugs. MDR bacteria typically are associated with nosocomial infections and result in increased morbidity and mortality. One of the best examples of MDR organisms is Methicillin-resistant Staphylococcus aureus (MRSA), which has had a successful transition from an almost wholly nosocomial setting to being widespread in the community. Campylobacter jejuni, Clostridium difficile, Pseudomonas aeruginosa, Streptococcus pneumoniae are some of the organisms associated with serious nosocomial infections.

A number of studies have been carried out to study for how long an antibiotic course should be, to decide the shortest feasible period for the complete killing of bacteria. While being treated for an infection, the type of antibiotics your health practitioner prescribes and the course duration need to be primarily based on the first-class evidence.

How can this Problem be Combated?

When a micro-organism gains resistance to an antibiotic, there’s a need to come up with another antibiotic that is effective in treating that resistant strain. If the bacteria develop resistance against that new drug, then a third drug must be found.

This can be illustrated by the drugs used to treat gonorrhea. There was no successful treatment for gonorrhea before the 1930s, but later sulfonamides were found to be effective in treating the disease. Sulfonamide resistant strains developed a few years later, calling for a second-line drug, penicillin in this case. Penicillin resistant strains started to emerge after several decades, which then caused the arrival of the third-line drug, spectinomycin. Gradually as the bacteria started to gain resistance against spectinomycin, the physicians were forced to resort to fourth-line drugs, leaving us wondering whether this can go on indefinitely. Few drugs are already on their 9th and 10th lines. So now, the question arises that what is the actual cure for this problem?

A National Action Plan was created by the White House in 2015 for measures overcoming antibiotic resistance: 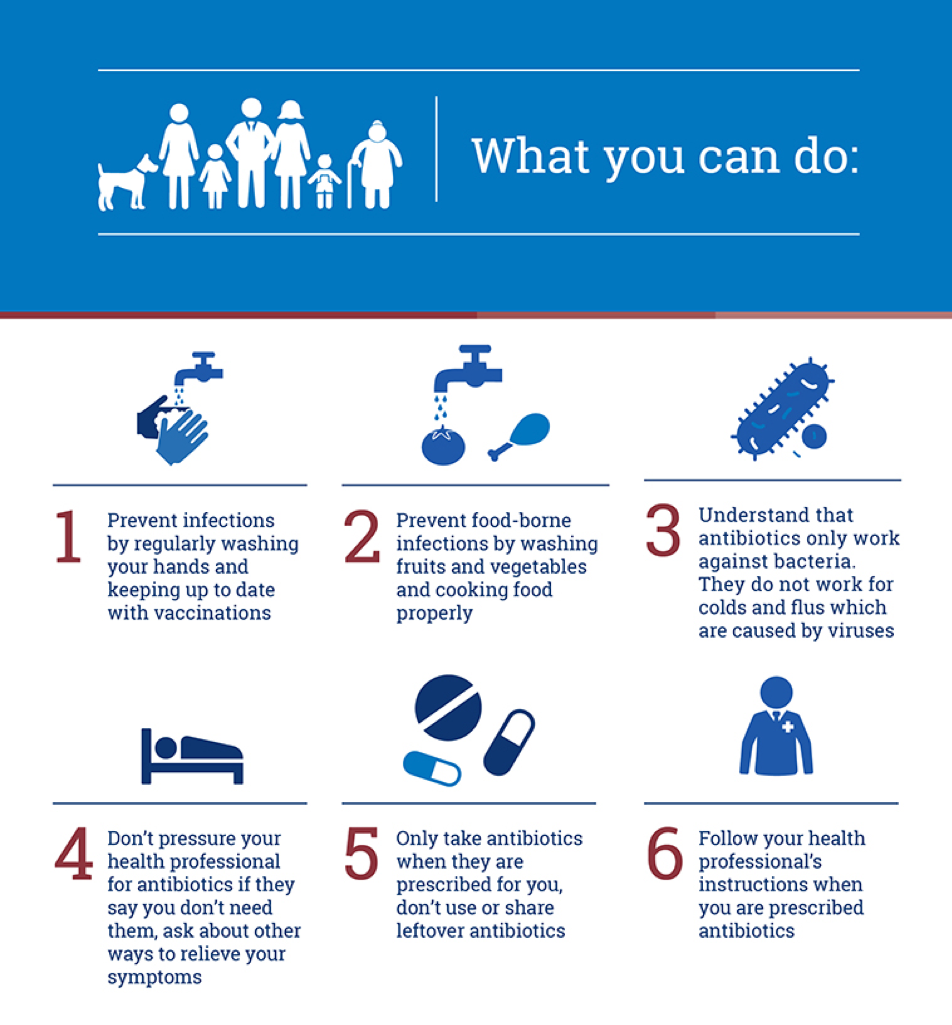 Current Research in this Field

Bacteriophages (bacteria-infecting viruses), holding several key advantages, have been mentioned as potential tools for combating the problem of drug resistance. Unlike antibiotics, phages possess high host-specificity and are unlikely to give rise to dysbiosis. There is a dearth of information regarding the clinical application of bacteriophages as an alternative to antibiotics; however, it is also possible that future studies and research may prepare for more noteworthy utilization of phages to treat bacterial infections.

One of the promising avenues of research involves the antibiotic resistance breakers, which are capable of resensitizing bacteria to antibiotics, of which β-lactamase inhibitors (BLIs) have come out to be most efficient. Clavulanic acid is one such well-documented example that displays poor antimicrobial activity in vivo, but when prescribed with β-lactam amoxicillin, its β-lactamase inhibitory activity affords the co-administered β-lactam protection from enzymatic degradation.

While there is continuous development on new antibiotics, none of them are expected to be efficient against the most resistant strains of bacteria. All the achievements of modern medicine are being put at risk by the increasing event of antibiotic resistance throughout the world. Surgeries such as the caesarian section, organ transplantation and also chemotherapy have become much more dangerous in the absence of potentially effective antibiotics for treatment and prevention of infections. Multiple initiatives have been led by WHO to address this global issue and therefore, “World Antimicrobial Awareness Week” is held annually since 2015 in order to encourage best practices among health workers as well as the general public. The latest slogan “Antimicrobials: Handle with Care” in 2020 reflects the broadening scope of drug-resistant infections.