General anesthesia came into play decades before when researchers were unknown of its principle. Anesthesia worked as a wonder to medicine and acted as a gamechanger in the operating room during surgery. Modern surgery without anesthesia would be an unimaginable thing. There lies a great history behind the arrival of the anesthesia in modern medicine. An early form of anesthesia (sulfuric ether) was first used at Massachusetts General Hospital in Boston by dentist William T.G. Morton and surgeon John Warren on October 16, 1846, to anesthetize a man whose vascular tumor from his neck was removed. Compounds that induced unconsciousness, prevented control of movement and, blocked pain - helped transform dangerous operations into safe surgery.

How does it Function?

Anesthetics predominantly act on receptors located in the brain and produce oscillations in the brain’s circuits, leading to a state of unconsciousness. This mechanism is considered more similar to coma than to sleep. General anesthesia primarily works by interrupting nerve signals in the brain and body preventing brain from processing pain and remembering what happened during surgery. Anesthetic compounds reduce the cerebral metabolic rate and blood flow with a degree of regional heterogeneity characteristic to the type and dose of the anesthetic agent. Anesthetics suppress the baseline metabolic activity and works by inhibiting the brain, via GABA receptors, and shutting down brain activity from the environment within 30 seconds of its application. General anesthetics mainly acts by inactivating the central nervous system (CNS) excitatory receptors while activating the inhibitory receptors of CNS.

Targets and Mode of Action

Induction, maintenance of general anesthesia through the control of various physiological side effects is typically achieved through a combinatorial drug approach, like if anesthesia induction is facilitated by one general anesthetics then other drugs might be used in parallel, to subsequently achieve and maintain the desired anesthetic state. Every anesthetic compounds vary in action with respect to their specific physiological and cognitive effects. Evidence suggest that lipid solubility correlates with anesthetic potency, indicating a lipophilic site of action. The mode of action of each class of anesthetics varies depending upon the target of the anesthetic compounds. The target mainly comprises of:
GABAA Receptor: GABAA receptors are chloride channels that hyperpolarize neurons and function as inhibitory to CNS receptors. Propofol, etomidate, isoflurane, benzodiazepines (midazolam, lorazepam, diazepam), and barbiturates (sodium thiopental, methohexital) falls under this category. 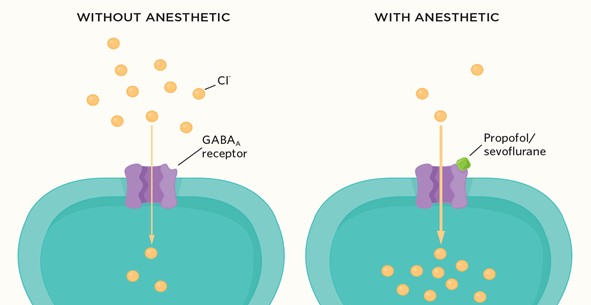 NMDA Receptor: Ketamine, an NMDA receptor antagonist, appears to bind preferentially to the NMDA receptors on GABAergic interneurons, explaining its analgesic effects. Administration of ketamine alone leads to a dissociative state in which a patient may experience auditory and visual hallucinations. 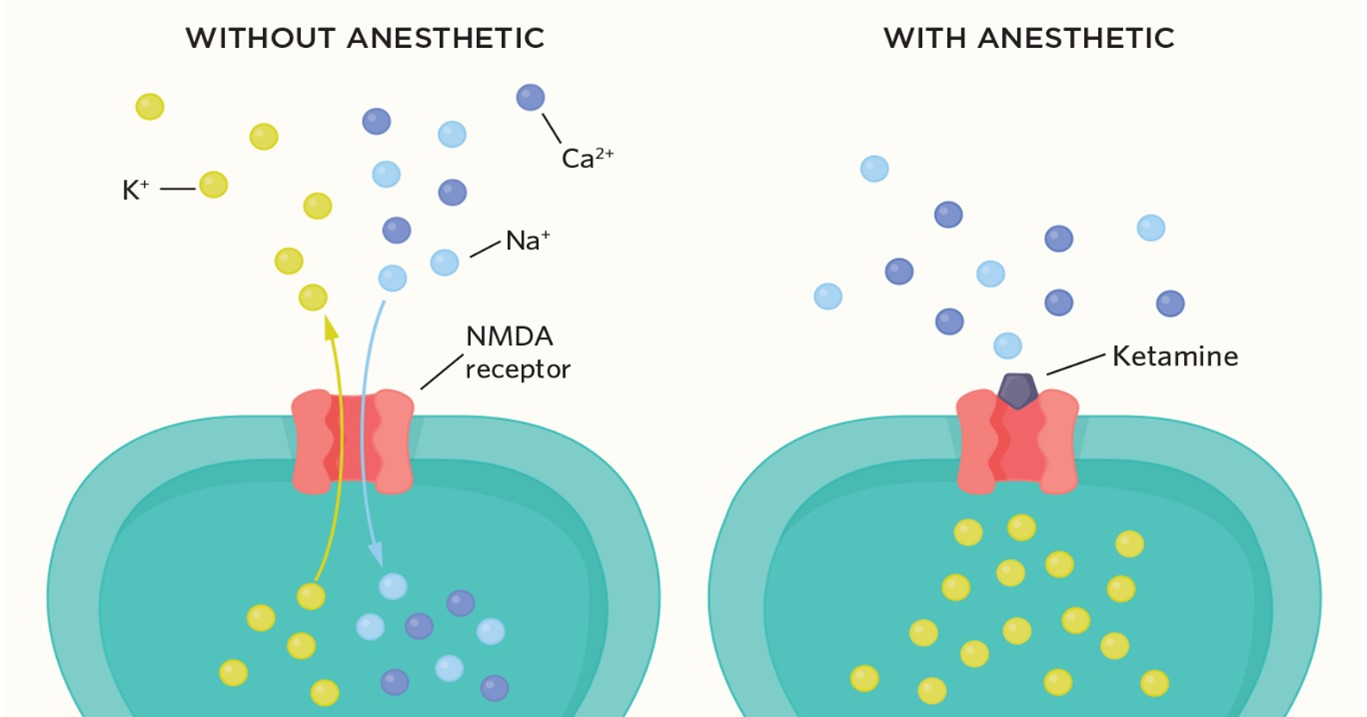 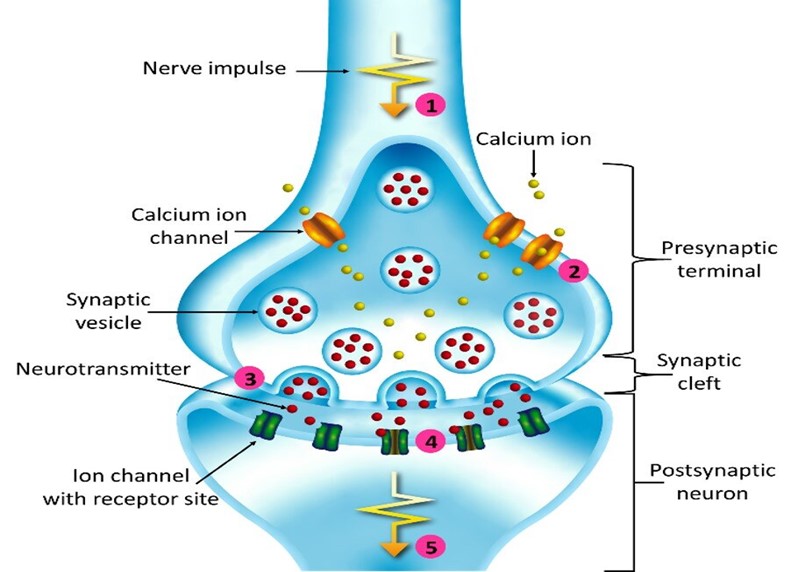 Anesthesia is attained through 4 stages, namely:
Stage I: Analgesia/Disorientation
Stage II: Delirium/Excitement
Stage III: Surgical Anesthesia
Stage IV: Respiratory Arrest
All the stages are categorized according to the physiological changes resulting from different degrees of unconsciousness.

“Deeper” and “Lighter” anesthesia are the two terms associated with the dose or degree of anesthesia applied during surgery. If a patient is increasingly affected by the anesthetic, his anesthesia is said to become 'deeper'. As anesthesia deepens, he passes from stage I towards stage IV. The lighter state happens when the patient recovers from anesthesia and gradually passes from the state of surgical anesthesia (stage III) towards stage I and finally recovering from unconsciousness.

Oscillations in the Brain During Anesthesia

Oscillations play a major role in keeping the brain in working conditions after the application of anesthetics. It interacts with the neural receptors and alters the neuron functioning. The transition from waking up to anesthesia is characterized by an increase in amplitude and a decrease in the frequency of the electrical activity recorded in electrocephalogram (EEG). The spectral composition of EEG signals has helped a lot more than other methods to clearly understand anesthetic brain oscillations. It occurs as one dominated by low-amplitude fast frequencies in the beta/gamma range to one dominated by the frequency ranges of slow (0.1-1 Hz), delta (1-4 Hz), and sigma (7-15 Hz, which corresponds with sleep spindles) oscillations. Alpha oscillations are the result of the synchronization of neural activity in the cortex and thalamus. In contrast, Beta/gamma (25-50 Hz) oscillations result from an increased spiking rate of excitatory neurons in the cortex. Each type of anesthetics produces different brain oscillations, and most importantly, age plays a complementary role to its effect.