Venous Myxoma of the Distal Femoral Vein: A Rare Case of Leg Pain and Swelling

Background: Myxoma is a rare tumor most frequently discovered in cardiac locations. The present report describes a rare case of extracardiac origin in the femoral vein, initially presenting as leg pain and swelling.
Case Presentation: A 40-year-old woman was admitted to our regional hospital with unilateral left leg swelling and pain. She underwent a Duplex scan and CT scan, which revealed a 21 x 25 mm diameter mass in contact with the distal femoral vein, initially diagnosed as a thrombosed sacciform aneurysm. The patient underwent surgical excision of a bulging mass in the vein wall, which was directly closed by running suture. The anatomopathological report concluded with a myxoma. One-year follow-up showed a patent vein without evidence of recurrence of the tumor.
Conclusion: Although very rare, peripheral venous myxoma may manifest with common symptoms as leg pain and swelling. Current vascular imaging and complete surgical excision should be performed without delay to allow a precise diagnosis and prevent further complications.

Myxoma is a rare benign myxoid tumor of primitive connective tissue. It is the most common type of cardiac tumors, originating in 75% of cases in the left atrium and 15-20% in the right atrium [1]. Incidence of myxomas in the great veins is extremely rare. A review of the literature demonstrates few cases of vena cava locations and only one in a femoral vein [2]. This case of femoral vein myxoma was responsible for cardiac syncope after embolization in the right atrium [2]. Most patients may present clinically with one or more symptoms of emboli, intracardiac obstruction and constitutional manifestation [3-5]. We describe with this report the first case of a distal femoral vein myxoma, which initially caused leg pain and swelling.

A healthy 40-year-old woman consulted a general practitioner for a sudden unilateral left leg swelling and pain. The patient underwent a Duplex ultrasound (DU) and a computed tomography (CT) that reveal a 21mm-diameter lesion in the distal part of the femoral vein, which was originally diagnosed as a partially thrombosed sacciform aneurysm. The DU showed an incompressible lesion, which caused distal flow limitation in the proximal part of the femoral vein. Nevertheless, no thrombosis was seen in the lumen of the lower limb deep veins. Therapeutic anticoagulation with novel oral anticoagulant (Rivaroxaban) was started with a rapid clinical improvement of pain and swelling without compression stockings. Three months later, the patient was addressed to a vascular specialist. The DU showed a 21 x 25mm dense lesion in contact with the distal part of the superficial femoral vein. The lower limb deep venous system was patent. She underwent a phlebo CT that confirmed the mass in close contact with the distal part of the femoral vein (Figure 1). This lesion was considered a major risk of emboli or deep venous thrombosis. The indication of a surgical exploration was retained. 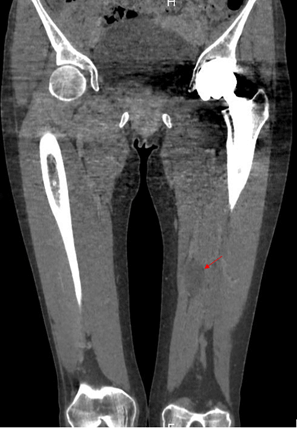 Under general anaesthesia, medial open thigh access was performed, allowing the exposition of the distal femoral vessels (Figure 2). A small gelatinous mass into the wall of the distal femoral vein was found (Figure 3). No adherence of the mass to the surrounding tissues was observed. Clamping of the femoral vein from each side of the lesion after an intra-venous 100Ui/kg heparinization was performed. The lesion was totally excised, leaving a vessel-wall defect, which was directly closed with a non-absorbable synthetic monofilament polypropylene running suture. 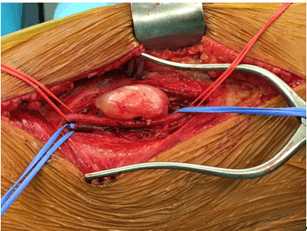 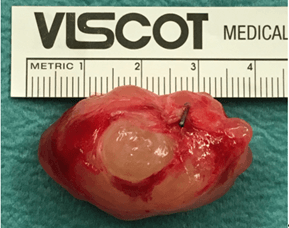 The postoperative evolution showed no recurrent oedema or other complications. Due to the anatomopathological diagnosis, echocardiography was post-operatively realized, and considered as normal, without evidence of primary cardiac location. The follow-up DU at seven days, 1, 3, 6 and 12 months showed patent lower limb deep veins without evidence of local recurrence. Therapeutic anticoagulation with Rivaroxaban was continued for three months without complication. The case was presented at our local tumor board, where no further follow-up was recommended due to the benign condition of the lesion and the low rate of recurrence.

Myxomas with a peripheral vein origin are rare, and to date, a single case was previously described [2]. In this case, symptoms are unspecific, mimicking a deep vein thrombosis. These symptoms were certainly due to the compression of the mass on the vein, and rapid therapeutic anticoagulation allowed to avoid thrombosis. Detection of the lesion was made by DU and CT, which are also adequate radiological exams to detect further complications. A preoperative venous mapping is mandatory to have an insight of lower limb deep vein patency. Other non-invasive modality, such as magnetic resonance imaging, should also be considered. Due to a variety of non-specific findings at first presentation, myxomas are initially suspected in only 5.7% of patients [6]. In fact, precise diagnosis can only be made with histology as a large number of tumors can be found in this location. Complete surgical excision with or without deep vein reconstruction or bypass is the treatment of choice. As for oncologic interventions, the surgical approach should allow minimal manipulation, adequate exposure of the whole mass with control of the vessels from both parts of the tumor. Nevertheless, myxomas are most often benign, and their recurrence is about 3% [7]. Due to these statements, follow-up of more than two years is not mandatory, with the exception of the patients with complex deep vein reconstructions.

HP and SV wrote the article. CB and FS critically reviewed the article. LG made the anatomopathological examination. All authors read and approved the final article.

No datasets were generated or analysed for the present article.

Not applicable to the present study.

Written informed consent was obtained from the patient for the publication of this case report.

© 2021 Hervé Probst. This is an open-access article distributed under the terms of the Creative Commons Attribution License, which permits unrestricted use, distribution, and reproduction in any medium, provided the original author and source are credited. Hosting by Science Repository. All rights reserved.
DOI: 10.31487/j.SCR.2021.06.07