Use of Cutis Graft as Biologic Prosthesis in Complicated Abdominal Closures: A Case Report

Background: Loss of domain, fascial separation, and wound contamination are all recognized challenges of complex abdominal wall reconstruction. Often, traditional therapies, such as fascial advancement, mesh reinforcement, and the use of bio-prostheses for infection are insufficient. Recently, we have investigated using cutis as an alternative therapy. We present the case of a 61-year old male treated in such a manner.
Methods: Our patient presented to our facility with a fascial defect of 30 by 40 cm, and an infected skin graft after undergoing an exploratory laparotomy for a gunshot wound at an outside hospital. During his course, he failed multiple traditional therapies, leaving him with a large open wound, four paired enterocutaneous fistulae, and a cholecystocutaneous fistula. We repaired his fistulae, performed a staged fascial closure, and reinforced it by placing an autograft of de-epithelialized dermis over it, bridging some areas of fascia.
Results: The patient had rapid incorporation of his cutis graft, with granulation over the graft within 72 hours. Within three months, all wounds had healed, and the patient had fully recovered.
Conclusions: Cutis autograft as a means for reinforcing abdominal wall closure is a versatile tool in the armamentarium of the surgeon to treat complex abdominal wall reconstruction. In the setting of failure of traditional therapies for fascial closure, it can potentially help with simultaneous bridging and reinforcement, demonstrating the strength of this type of repair.

Large ventral hernias remain a challenge in abdominal wall reconstruction; use of synthetic mesh can lead to pain, limited range of motion, infection, or fistulization [1]. Surgeons have turned to adjuvant techniques to improve outcomes. One method is botulinum toxin injection to increase the laxity of the abdominal wall for lower-tension closure [2]. Another approach is the use of biologic matrix mesh to decrease infection rates. Unfortunately, the use of biologics increases costs and does not alter recurrence rates [3]. Recently, the use of full-thickness skin as an alternative to mesh products has demonstrated low infection rates but similar recurrence [3]. Autologous skin grafts, described in the early 20th century, became popular in hernia repair in the 1940s-1950s due to high tensile strength, vascularity, tissue incorporation, and availability; concerns over epidermal cyst formation and infection, however, led to abandonment [4, 5]. At our institution, we use specially prepared full thickness skin grafts for hernia repair. Although commonly used in simple hernia repair, the role of these cutis grafts in complex abdominal reconstruction is poorly understood. Herein, we present a case illustrating the role of the cutis graft in providing successful abdominal wall closure of a 61-year-old male with a multiply recurrent complex ventral hernia in which numerous interventions failed.

A 61-year-old male presented with a large, complex ventral hernia with loss of domain following treatment of a gunshot wound to the abdomen in 2016 at an out of state hospital. He underwent exploratory laparotomy (ex-lap) via cruciate incision and required a partial gastrectomy and colonic resection with re-anastomosis for intra-abdominal injuries. His open abdomen closed via secondary intention and split thickness skin grafting (STSG) of exposed abdominal contents. In October 2017, he presented to us for infection of the skin overlying his defect. On exam, he had visible peristalsis of bowel below his abdominal skin graft, and an abdominal wall defect measuring 30 x 40 cm in size with his umbilicus 15 cm to the right of midline (Figure 1A). Given the defect size, we opted for staged closure with serial tightening of the abdominal wall. The first surgery involved an ex-lap via midline approach, lysis of adhesions, and placement of the ABRA® (Acell, Inc., Columbia, MD) staged closure device.

Our patient underwent uneventful ABRA® adjustments until postoperative day (POD) 10, when inspection of the bowel revealed a pinhole leakage that was over-sewn. This repair remained intact during subsequent adjustments, but, on POD 17, had leakage at the suture sites. Attempted closure of the leak using fibrin sealant and porcine urinary bladder matrix failed, and the fistula grew to quarter size. By this point, the fascial defect was only 2.5 cm wide. After several weeks of conservative management, the fistula was resected and re-anastomosed. To treat the hernia, we placed a biologic tissue matrix to bridge the fascial defect and applied negative pressure wound therapy (NPWT) to aid in granulation. Following this repair, the patient transferred to a long-term acute care facility, where he developed four high output enteroatmospheric fistulae resulting from the dissolution of the biologic matrix and placement of the NPWT sponge directly on the bowel. He also developed a cholecystoatmospheric tract, prompting cholecystostomy tube placement.

Given the sizable abdominal wall defect and presence of enter atmospheric fistulae, the patient underwent botulinum toxin injections of the abdominal wall musculature to increase its laxity and aid closure. Six weeks later, he was taken for ex-lap that included three small bowel resections, hemicolectomy with small bowel to transverse colon anastomosis, and cholecystectomy. For closure, we placed a Wittmann patch® (Starsurgical, Inc., Burlington, WI). Due to poor tissue quality, the patch was attached full thickness through the fascia and anchored at the skin with felt bolsters. Serial adjustments occurred until POD 25, at which point the fascial defect was a couple of centimeters wide. Unfortunately, the felt bolsters eroded through the skin, preventing further adjustment. We decided to use cutis grafts to complete the repair. 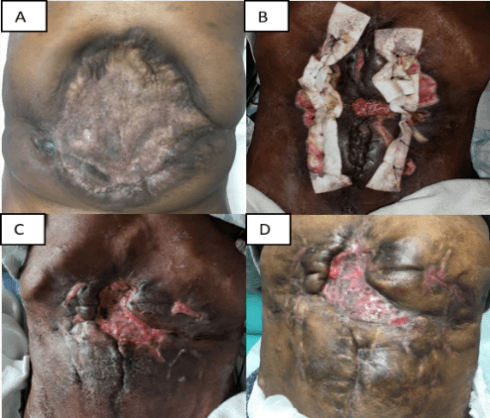 In the OR, we took down the Wittmann patch®. We undertook full-thickness skin graft harvests in bilateral groins. Grafts were ellipses measuring 14.5 x 6.5 cm on the left and 14 x 5.5 cm on the right. We prepared the grafts on the back table by removing excess tissue from the dermis, de-epithelializing them, meshing each graft in a 1 to 1.5 ratio, and soaking the grafts in hydrogen peroxide solution. To reapproximate the defect, we used the cutis graft as an underlay implant for the lateral bilateral fascial releases performed to relieve midline tension, securing them with circumferential trans fascial sutures. We placed five full thickness retention sutures through the abdominal wall secured with felt bolsters at the skin. We re-approximated the midline fascia in an interrupted fashion. At the level of the original cruciate incision, a 4 cm defect remained between the fascial edges. We bridged this space by placing a cutis graft in an underlay position and securing it to the fascia. This graft remained exposed to the atmosphere in the wound, which was packed with moist gauze. By POD 3, granulation tissue was present on the exposed cutis graft (Figure 1B). Granulation continued filling the wound defect (Figure 1C). The patient was discharged home on POD 75. At his 2- and 3-month follow up visits, the repair was intact without signs of recurrence or infection, and the patient remained well-nourished and hydrated. Full incorporation of the graft occurred by 3 months.

Unfortunately, this patient’s history related to his large, complex ventral hernia is not infrequent. Allowing healing by secondary intention and STSG at the time of injury led to a massive hernia with loss of domain. As a result, he required multiple interventions to achieve abdominal wall closure that were stymied by complications, including failure of several closure systems and techniques (i.e., the ABRA® and Wittmann Patch®, botulinum injection), dissolution of two separate biologic prostheses without incorporation into the fascia, and development of multiple fistulae requiring resection.

Given the patient’s multiple fistulae and nutrition difficulties, he was at high risk for developing a postoperative infection, precluding synthetic mesh implantation and impeding biologic prosthesis efficacy due to early breakdown. In such a challenging setting, the cutis graft has multiple advantages. First, it is composed of living tissue, enhancing resistance to infection, and decreasing the likelihood of chronic contamination requiring explanation. Further, the multiple re-operations on this patient led to tissue failure, as evidenced by the bolster erosion on the Wittmann patch®. The use of the cutis graft stabilized this breakdown by buttressing the repair with living, highly vascularized tissue that could effectively incorporate into adjacent tissue. The rapid development of granulation tissue over the exposed cutis graft bridging the 4 cm defect at the junction of the patient’s midline and transverse incisions best demonstrates this fact. Most impressively, after multiple failed attempts, full incorporation of the cutis graft with resolution of the hernia defect occurred within 3 months (Figure 1D).

The results point to a viable option for difficult cases where interventions have failed, and synthetic products are not an option. This method is notable in that there is no need to close fascia or skin; a bridge is sufficient. Other meshes have viability in high-risk wounds but require NPWT or skin closure. We packed the defect and allowed healing by secondary intention over the graft. Synthetic graft would never be left open to the atmosphere due to its high risk of becoming infected; biologic mesh would dry out. If infection were to occur, the cutis graft could remain in place. As native tissue, this graft is resistant to inflammation or infection. Even when indicated, biologic meshes are expensive and may fail, as seen here. Multiple negative outcome predictors are present in this case, such as poor tissue quality, malnutrition, and poor blood flow, yet the cutis graft did well. Donor site morbidity is low, and tissue is abundant and low cost. This outcome suggests that utilization in a contaminated field would be successful; the cutis graft, therefore, has a role in the trauma setting.

We recommend considering the cutis graft in abdominal closures where size, tension, strength of repair, or infection are of concern; in short, all acute and chronic hernia patients can benefit from the incorporation of this approach into surgical practice.

© 2021 Michael W. Cook. This is an open-access article distributed under the terms of the Creative Commons Attribution License, which permits unrestricted use, distribution, and reproduction in any medium, provided the original author and source are credited. Hosting by Science Repository.
DOI: 10.31487/j.JCMCR.2020.01.07