Unusual Complication of Urethral Sounding with a Knitting Needle

Medically, a ‘sound’ can refer to an instrument that is placed within a narrow passage, often the urethra, for the purpose of exploration and dilatation. However, beyond the field of medicine, urethral sounding exists as a sexual practice and involves the placing of an object or objects into the urethra via the meatus or the injection of liquid along the canal and is most commonly performed to the male urethra [2]. The emergency treatment of a retained foreign body within the urethra and bladder is an uncommon clinical scenario within adult urology. Foreign body insertion can cause hematuria secondary to urethral trauma and can increase the risk of infection, urethral stricture, and bladder perforation [2].

We describe an unusual case of urethral sounding with a knitting needle that penetrated the adipose tissue near the rectum, and that required a mini-invasive procedure with local anaesthesia. The procedure was performed at the patient’s bed.

A male in his 60’s presented to our emergency department requiring assistance with the removal of a 20 cm (8 inches) knitting needle stuck for 2 days in his urethra after he had introduced it through his urethra with sexual intentions. Both ends of the needle were rounded and pointed. The patient had, 3-years prior to this incident, a radical cystoprostatovesiculectomy with a pelvic lymphadenectomy and the creation of an ileal conduit, and a simultaneous appendectomy. After its introduction, the needle disappeared in the urethra and could no longer be removed by the patient, who reported bleeding from the meatus urethrae. A physical examination was performed. The patient had no fever, nor abdominal pain. The penis was noticeably swollen and with a hematoma. One end of the knitting needle was palpable in the middle of the body of the penis, 5 to 6 cm (2 inches) distant from the meatus urethrae. A perineal hematoma was also to be seen. A hardening, probably that of the needle, was palpable in the urethra’s prebulbar area of the perineum. Blood was not found in the digital rectal exam, neither was the needle palpable. X-ray of the pelvis (Figure 1), as well as pelvic computertomography (Figure 2), showed the 20 cm long knitting needle. Additionally, images of the CT showed the penetration through the adipose tissue, approximatively 10 cm (4 inches) left of the rectum, with a diffuse subcutaneous hematoma. No intraabdominal structure, the rectum for instance, was injured (Figures 3 & 4). 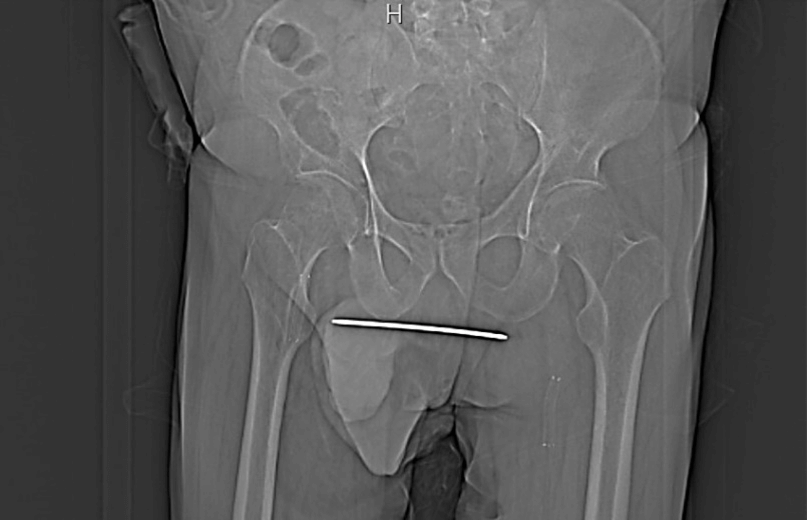 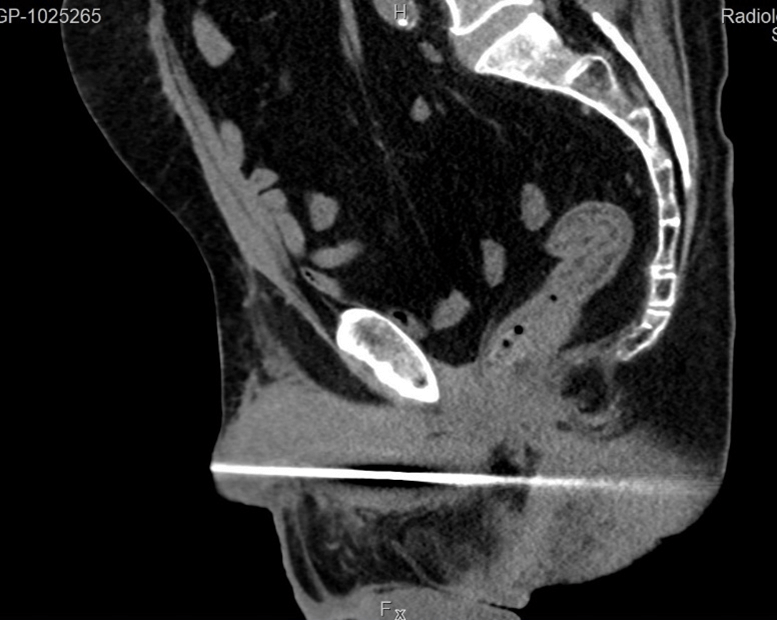 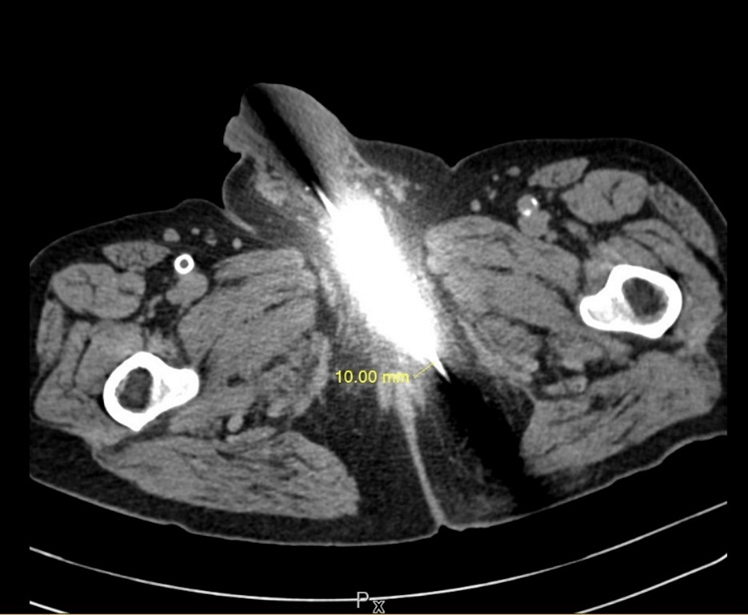 Figure 3: Axial plan of a pubic computertomography showing the penetration through the adipose tissue, approximatively 10 cm (4 inches) left of the rectum. 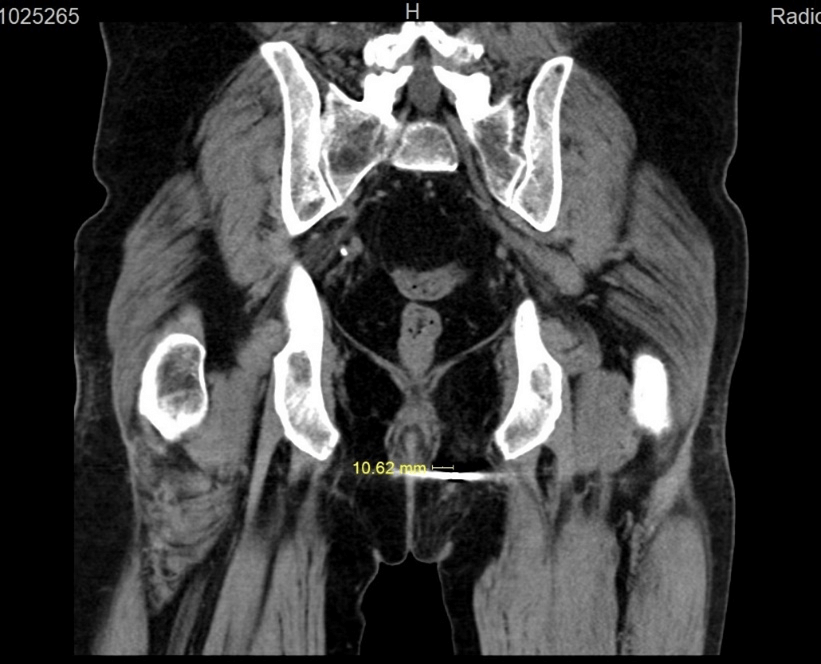 Figure 4: Coronal plan of a pubic computertomography showing the penetration through the adipose tissue, approximatively 10 cm (4 inches) left of the rectum.

After getting patient’s consent, a mini-invasive procedure with local anaesthesia was performed at the patient’s bed under parenteral antibiotic therapy with Sultamicillin. A tiny skin incision was made right on the needle’s end, which was very palpable on the body of the penis. The needle was then removed with a surgical clamp. Postoperatively, no complications occurred, the wound was not sore. The patient was discharged the following day with oral antibiotics and subsequently to the care of his urologist. Since the patient underwent previous cystectomy, a follow-up regarding local complications such as urethral strictures wasn’t necessary.

Although rarely reported in the literature, urethral sounding should be a differential diagnosis for patients with pain, hematuria, urinary tract infection and dysfunction, especially with the existence of a history of intoxication, psychiatric illness, mental retardation or dementia [3].

Minimally invasive procedures, either with endoscopic or manual removal of the foreign body out of the urethra, is the method of choice [3]. Thus, endoscopic retrieval was used for 16 of the 17 patients, and in all eight cases involving three male patients [3, 5]. One patient needed a perineal urethrotomy [5]. We first tried a manual retrieval of the needle with a surgical clamp, which was unsuccessful. Before trying an endoscopic procedure, the patient benefited from another attempt at bedside using a surgical clamp and a tiny skin incision at the location where the needle was palpable, which was revealed to be successful. Many complications and associated injuries may occur according to literature, the most common being mucosal tears, in 14 patients out of 17, and false passages in four [5].

In conclusion, urethral sounding is an uncommon cause of presentation at clinics, but the number of case reports has increased in recent years [3]. The motivation behind urethral foreign body insertion is most commonly sexual [2]. As reported in the literature, the treatment of choice is the endoscopic retrieval of the self-inserted object. Other mini-invasive approaches such as manual retrieval may also be considered. Open surgery is reserved for extremely complicated cases that can´t be treated otherwise [3]. A psychiatric evaluation is to be considered, as a psychological involvement can be found in literature [5]. A follow-up is also needed to trace eventual complications (infections, urethral strictures).

i. Endoscopic retrieval is the method of choice.
ii. A manual retrieval at bedside can be sufficient.
iii. A psychiatric evaluation is always recommended. However, the majority of patients are going to be psychologically normal.

© 2023 Ayoub Hidayat Allah. This is an open-access article distributed under the terms of the Creative Commons Attribution License, which permits unrestricted use, distribution, and reproduction in any medium, provided the original author and source are credited. Hosting by Science Repository.
DOI: 10.31487/j.SCR.2022.12.03

Figure 3: Axial plan of a pubic computertomography showing the penetration through the adipose tissue, approximatively 10 cm (4 inches) left of the rectum.

Figure 4: Coronal plan of a pubic computertomography showing the penetration through the adipose tissue, approximatively 10 cm (4 inches) left of the rectum.

2.     Lindsay JS (2019) The Practice of ‘Urethral Sounding’ Complicated by Retained Magnetic Beads Within the Bladder and Urethra: Diagnosis and Review of Management. Am J Case Rep 20: 1841-1844. [Crossref]