The Presence of Biofilms in Gouty Tophi

In patients who had confirmed gout, we have pathologically identified biofilms in cutaneous tophi. Clinically, these lesions were asymptomatic, off-white papules on the ears and/or extremities. The methods used for confirmation were the same as those used for biofilms in other organs, namely staining for the extracellular polysaccharides which make up the bulk of the biofilm with colloidal iron (CFE), and Congo red (CR) that stains the amyloid that serves as infrastructure of the biomass. CFE was used, instead of periodic acid Schiff (PAS), because of the presence of uric acid crystals in the tophi; CFE, which stains acidic mucin, was used and showed more positivity than PAS that stains neutral mucins. These stains were positive in the areas of the tophus and negative in the surrounding tissue. CD 282 (Toll-like receptor 2) immunostain was negative in all, save for faint staining in one specimen, indicating the immune system was not involved.

In prior studies, we, and others, have found biofilms created by many different organisms, in many different organs, and in many different chronic diseases [1-8]. These have ranged from staphylococcal biofilms occluding sweat ducts in eczema to streptococcal biofilms in the tonsils in psoriasis [1, 2]. Also, we have commented on biofilms in chronic internal diseases like those from spirochetes in Alzheimer’s disease (AD) that lead to disease locally , and in arteriosclerotic arteries where the disease may be local (thrombosis) or distal (embolism) [7, 8].

Ten specimens from 7 M and 3 F ages 58-82 were initially diagnosed as gout (tophus) with routine hematoxylin and eosin histological staining. Colloidal iron CFE (for acidic mucins) and Congo red stains were also performed on these specimens as was CD 282 immunostain. The findings were confirmed by 4 dermatopathologists. As controls, 10 specimens from healing wounds were examined, except for CD 282.

All ten specimens showed focally positive intradermal staining with colloidal iron (CFE) and Congo red (CR) in the area of the tophus (Figure 1-3). The ten specimens of healing wounds were negative for similar dermal staining. The staining occurred in the areas of the uric acid depositions and indicate that biofilms are involved in the disease process. There was faint staining with CD282 in one specimen and all the rest were negative. This indicates that TLR2 was minimally involved. 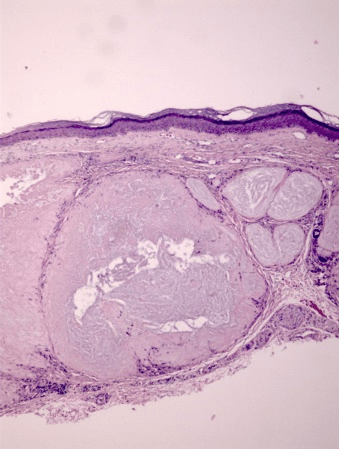 Figure 1: H+E stain of cutaneous tophus; an accumulation of uric acid is noted in the dermis. 10X 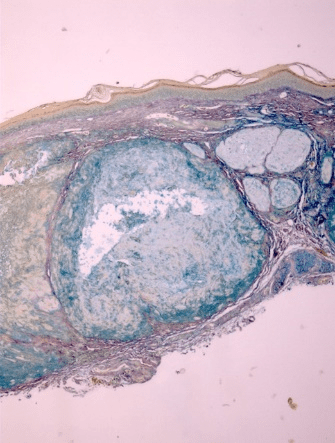 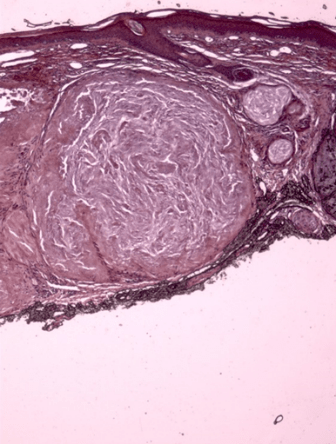 All ten of our patients had clinically confirmed gout with elevated serum uric acid in conjunction with chronic arthritis, and occasional flares of acute arthritis, in focal joints. These patients presented dermatologically with asymptomatic small skin deposits which on routine histologic examination revealed focal deposition of an amorphous material which has previously been shown to be uric acid crystals [11]. In the present study, we have confirmed the presence of biofilms in those areas of uric acid deposition. These biofilms were confirmed pathologically by positive CFE and CR staining which stain the mucin and amyloid in the similar biofilms that have been found in the study of other skin diseases such as eczema and tinea versicolor [1, 3].

Further, these biofilms did not stain for CD282 except for faint staining in one specimen indicating the lack of immune system involvement. This fits with the clinical finding that these lesions were asymptomatic and presented simply as “new growths.” In eczema, where the intraductal biofilms attracted TLR2, we have shown that the prominent symptomatic response, the marked pruritus, is due to the TLR2 upregulating the known pruritogen, PAR2, to cause the unrelenting itching. The TLR2 leaves its control location in the basal layer to surround the affected sweat ducts in the upper epidermis in eczema [1].

In this work, we have not identified any microbes; that will be for a subsequent effort. Some of the microbes that certainly will require attentions will be dental organisms. They have been shown to play a role in other chronic diseases with both direct and epidemiological findings [7, 11].

© 2021 Herbert B. Allen. This is an open-access article distributed under the terms of the Creative Commons Attribution License, which permits unrestricted use, distribution, and reproduction in any medium, provided the original author and source are credited. Hosting by Science Repository. All rights reserved.
DOI: 10.31487/j.CMR.2018.01.007

Figure 1: H+E stain of cutaneous tophus; an accumulation of uric acid is noted in the dermis. 10X