The differential diagnosis of thyroid nodules in patients treated for renal cell carcinoma in the past can be challenging unless they present sonographic features of malignancy. The possibility of metastases to the thyroid gland, even many years after the primary occurrence of the renal tumor, should always be considered. Here, we present the case of a patient diagnosed with metastases of a renal cell carcinoma to the thyroid 22 years after nephrectomy of the left kidney and uneventful follow-up.

As thyroid nodules are prevalent in the general population and mostly benign, the possibility of metastatic disease to the thyroid may be underestimated. Especially the latency between diagnosis and treatment of primary cancer and occurrence of the metastases may be misleading in the diagnostic process. Renal cell carcinoma (RCC) is the most common origin of metastases to the thyroid gland, followed by lung and breast cancer [1]. Therefore, thyroid nodules in patients with a past history of kidney malignancy require careful evaluation. Lesions that are considered benign on ultrasound (US) according to thyroid imaging reporting and data system (TI-RADS) may be considered for cytologic examination [2]. In case of size progression and infiltration of the adjacent tissue, surgical excision with concurrent pathological evaluation should be indicated as other treatment options of metastatic RCC, including immune checkpoint inhibitors and tyrosine kinase inhibitors, have not yet been thoroughly evaluated.

An 80-year-old male in good general condition, whose past medical history included a renal cell carcinoma with radical left nephrectomy in 1997, was referred to our clinic for a routine check-up of thyroid goiter. He presented without any signs of compression or other clinical symptoms related to these findings. A multiparametric US examination was performed by a highly-experienced investigator with more than 30 years of experience using two high-end US machines systems (Aplio i900; Canon Medical Systems Corporation, Tochigi, Japan; Acuson Sequoia, Siemens Healthineers, Erlangen, Germany) including B-mode, Duplex sonography, US-elastography, and the contrast-enhanced US. Besides multiple small spongiform and cystic focal lesions, US depicted a distinct enlarged right lobe (28ml) compared to the left lobe (6ml), while no suspicious cervical lymph-nodes could be detected.

One isoechogenic, homogenous thyroid nodule of the enlarged right lobe penetrated the wall of the right jugular vein, with identical echogenicity, elasticity, and vascularization as the right lobe (Figure 1). Perfusion of the right jugular vein was intact with severe intraluminal obstruction >90%. While US features indicated a benign, atypical thyroid nodule (homogenous, isoechogenic, no microcalcifications or marked hypoechogenic areas), malignancy was suspected due to the infiltration of the jugular vein vessel wall (Figure 2). 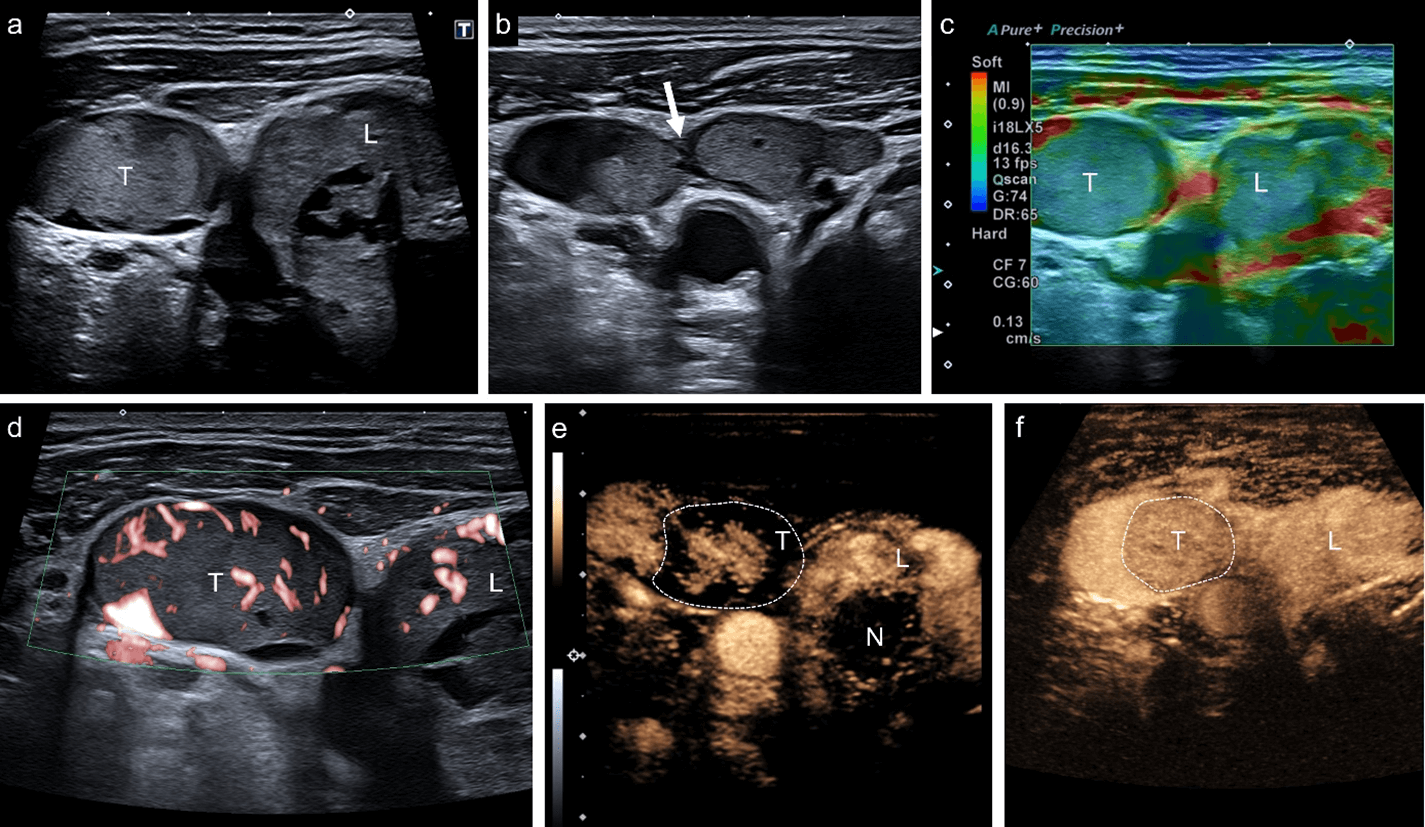 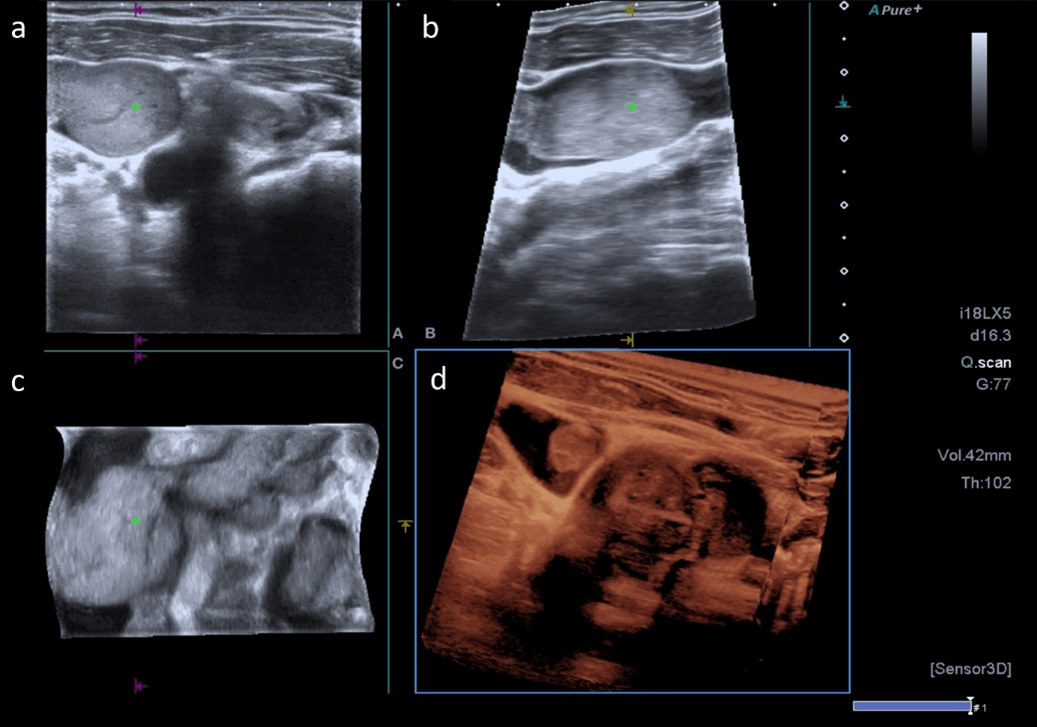 Laboratory results showed normal function of the thyroid gland. Serum calcitonin was not elevated. Thyroidectomy with tumor thrombectomy of the jugular vein was indicated. Prior to the operation, a magnetic resonance imaging (MRI) of the head and neck showed no cerebral or cerebellar lesions. A non-enhanced computed tomography (CT) scan of the chest showed non-specific lung nodules measuring up to 4mm.

As the right thyroid gland extended caudally down to the superior caval vein, a partial sternotomy was performed during surgery. Venous tumor-thrombosis was detected in the inferior as well as upper thyroid veins with macroscopically complete resection. The parenchymatous nodule extending into the right jugular vein could be removed by open thrombectomy (Figure 3). The operation was carried out otherwise uneventfully, and a total thyroidectomy with central and right-sided focused lateral lymphadenectomy as well as neuromonitoring and preservation of parathyroid glands was achieved. Postoperatively, vocal cord function was intact and mild hypoparathyroidism was temporarily treated with calcium and vitamin D.

Histopathological examination revealed metastasis of RCC to the right thyroid lobe, measuring up to 32mm in diameter and, a tumor thrombus in the right jugular vein. Histologically the tumor was composed primarily of clear cells with distinct cell walls and round to oval nuclei. Chromatin was evenly dispersed, sometimes small basophilic nucleoli were recognizable at higher magnification. Mitoses were scarce. Morphology was not typical for neither a papillary nor a follicular nor a medullary carcinoma, but rather recalling a clear cell renal carcinoma. Nevertheless, clear cell variants of both papillary and follicular carcinoma are described in literature, wherefore immunohistochemistry was performed. Corresponding with conventional morphology, the tumor cells expressed pancytokeratin, vimentin, and CD10 as typical markers for renal carcinoma. Typical markers for thyroid carcinoma like thyreoglobulin and TTF1 remained negative. Proliferative activity was low. In conclusion, the diagnosis of renal carcinoma could be established.

The staging process involved CT scans of the abdomen, MRI, and scintigraphy. Abdominal CT showed no local recurrence of the RCC. Hypodense liver lesions on single-phase CT scan were confirmed as benign cystic lesions by contrast-enhanced MRI with no hint of malignancy. A CT scan of the neck two months after surgery showed no signs of recurrence in cervical lymph nodes. Bone scintigraphy ruled out skeletal metastasis. The patients’ case and further course of action was discussed in a multidisciplinary tumor board.

Metastases to the thyroid represent 1.4-3% of all thyroid malignancies. In the autopsy series, the incidence ranges between 2% and 24% suggesting a high prevalence of occult tumors [3, 4]. Furthermore, thyroid metastases of RCC account for 48.1% of non-thyroid metastases to the thyroid, the absolute prevalence being 0,65% [5]. Of note, the median interval from primary surgery to the detection of thyroid metastases ranges from 6 to 12.5 years [6, 7]. In the reported case, the metastasis was detected 22 years after resection of the primary tumor. Thus, a long-term follow-up of the patients with RCC including ultrasound of the thyroid and neck is recommended.

Ultrasound is a standard procedure used to evaluate thyroid nodules based on TI-RADS classification [8]. Taller-than-wide shape, irregular margins, microcalcifications, and marked hypoechogenicity distinguish nodules suspicious of malignancy [9]. Additionally, size progression and invasion of the adjacent tissue may characterize a malignant tumor. Although not implemented in the TI-RADS system, US elastography can assess tissue stiffness and solidity, another aspect suggesting malignancy [10]. However, the differentiation between primary thyroid cancer and metastases based on US cannot be ensured. Hence, fine needle aspiration with subsequent cytologic examination can provide the necessary information, as recommended by international guidelines [11]. In our case, the penetrating tumor mass was neither stiffer compared to the thyroid gland nor showed different enhancement pattern like washout during late phase or early enhancement. While the right lobe was significantly enlarged, a clear demarcation of the exact tumor amount was not possible on B-mode US. Only, infiltration of the jugular vein was an indicator of malignancy, which is not seen on benign thyroid nodules.

The role of surgery in the treatment of RCC metastases to the thyroid has not been thoroughly evaluated. If a tumor mass in the thyroid gland causes compression symptoms, the indication to operate is clear. Otherwise, there is no consensus on the standard of care due to the lack of clinical studies involving large numbers of patients comparing thyroidectomy to other treatment options. In a systematic review of 140 cases of patients with thyroidectomy for RCC in Germany and Austria, a median 5-year survival rate accounted for 46%, and 28% of operated patients had recurrent neck involvement [12]. New treatment options for advanced RCC were shown to control disease progression, but at the expense of frequent adverse effects [13]. Nevertheless, so far, we can only speculate on the long-term outcomes of therapy for RCC- metastases to the thyroid with monoclonal antibodies and tyrosine kinase inhibitors [14-16]. Until then, surgical resection should be considered as the main treatment option, especially in otherwise inconclusive diagnostic results.

Metastases of solid-organ cancers to the thyroid gland are relatively rare, but renal cell carcinoma accounts for a majority of these metastases. They can occur late after primary tumor resection and have considerable potential for complications. We report very late appearance of metastases to the thyroid gland 22 years after the initial diagnosis of an RCC incidentally found by routine US. The patient underwent successful, uncomplicated removal of the thyroid with extensive invasion into the right internal jugular vein. This case underlines the importance of long-term follow-up screening for RCC patients. Since surgery remains the primary treatment modality, early detection might help to minimize the occurrence of complicated anatomic situations.

© 2021 Agata Katarzyna Dukaczewska. This is an open-access article distributed under the terms of the Creative Commons Attribution License, which permits unrestricted use, distribution, and reproduction in any medium, provided the original author and source are credited. Hosting by Science Repository. All rights reserved.
DOI: 10.31487/j.SCR.2020.12.19