Retropleural minimal invasive approach to the thoracolumbar junction has become more popular in the last decade both for degenerative and traumatic spine surgery as it marries the advantages of direct vision typical of open surgery and the philosophy of tissue sparing which characterizes the thoracoscopic approach. Nevertheless, as with the just mentioned techniques, this approach also requires the caudal displacement of the diaphragm with the organs below including the spleen. The authors report one case of postoperative spleen disruption following a retropleural minimal invasive approach in a patient with an underlying grade II spleen lesion occurred 8 days before and considered safe by the general surgeon. We conclude that even negligible spleen injuries must be considered an absolute contraindication to thoracolumbar junction lateral approach even with minimal invasive techniques.

Minimal invasive anterior approach to the thoracolumbar junction has become more popular in the last decade due to the reduced intraoperative and postoperative morbidity compared to the traditional open access and because of the shorter learning curved compared to thoracoscopy. This approach is generally carried out through dedicated retractors and instrumentation that includes an optical fiber illumination system. Retropleural left approach allows to access the thoracolumbar junction down to the L1-L2 disk and also to the cranial half of L2 vertebral body with no or minimal detachment of the diaphragm insertion. By this approach one can also safely decompress the spinal cord from the front without any manipulation and, if the pleura is left intact, a thoracic drainage, which is always cause of postoperative discomfort and delayed discharge from hospital, will not be required [1]. To approach the caudal part of the thoracolumbar junction the diaphragm and the abdomen content below are pushed downward by a retractor blade. During the left lateral approach, the spleen remains just underneath the diaphragm and this must be considered in polytrauma patient with even minimal injuries to this organ. This aspect has become particularly relevant in the last ten years as the management of liver and spleen injuries by general surgeons turned to conservative treatment in most cases [2, 3]. We report a case of spleen rupture following a minimal invasive left lateral approach to L1 performed ten days after trauma in a clinical setting considered safe by the general surgeon.

A 54-year-old female was admitted in the ER of our hospital following a motorbike accident. At admission, the patient was conscious, hemodynamically stable, abdomen was soft and non-tender. She reported an open 3B fracture of the right tibia, and no neurologic deficit [4]. She also complained pain at the thoraco-lumbar junction. Total body CT-scan showed an incomplete burst fracture of L1 (type A3 in the AOSpine classification) (Figure 1) and a grade II spleen lesion (AAST-OIS classification) with no active bleeding and a minimal fluid effusion around (Figure 2) [5, 6]. The patient remained stable within the next hour (haemoglobin 13,3 g/dL, serum lactate 1.3 mmil/L, and base excess 3 mmil/L, on arterial blood gas analysis) and was sent to OR for the tibial fixation. L1 fracture was given a non-urgent surgical indication. A more accurate examination of CT images revealed a severe pedicle hypoplasia in L2, so a minimal invasive anterior corpectomy and fusion was considered a suitable option to effectively treat the patient with the shortest feasible fusion area. Non-operative management was chosen for the spleen injury, and it was monitored by daily ultrasound examination for one week. As neither bleeding nor changes in spleen morphology were observed during this period spine surgery was performed on the eight day after trauma. 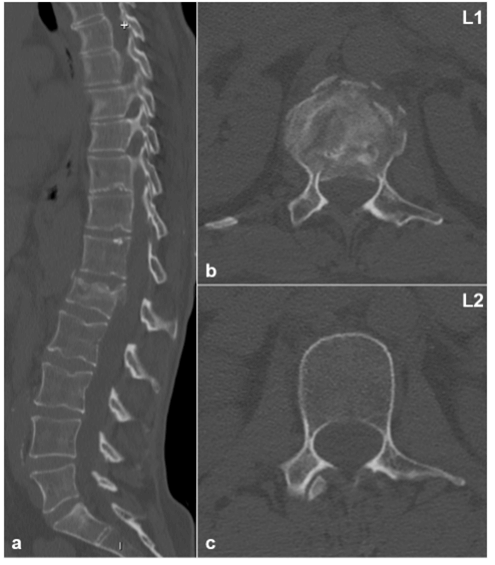 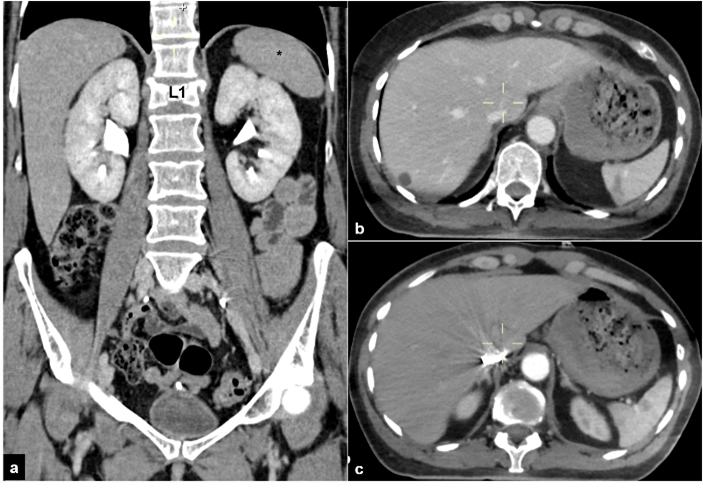 Figure 2: a) Total body CT-scan reveals the anatomical relationship between diaphragm, spleen (*) and L1. b) & c) Grade 2 spleen lesion with intraparenchymal hematoma <5 cm is visible on the axial plane.

The patient was put in right lateral decubitus. By mean of a radiologic landmark placed on the left hemithorax over L1, a 6 cm incision was made above the corresponding rib. A same length tract of the rib was resected and later used as a graft to access the thoracolumbar junction by retropleural approach. A 2 cm tract of the diaphragm was detached from his posterior insertion to reach the cranial half L2 vertebral body. A dedicated retractor, strongly connected to the surgical bed, was placed into the thoracic cavity, and centered on L1. Its caudal blade was then opened downward to keep the diaphragm away from the working area. Next steps were L1-L2 and T12-L1 discectomies, L1 corpectomy and anterior column reconstruction by an expandable titanium caged filled with autologous bone graft (from both the vertebral body and the resected rib). Finally, a titanium plate from T12 to L2 was placed in to further stabilize the cage as no posterior fixation system had been planned (Figure 3). 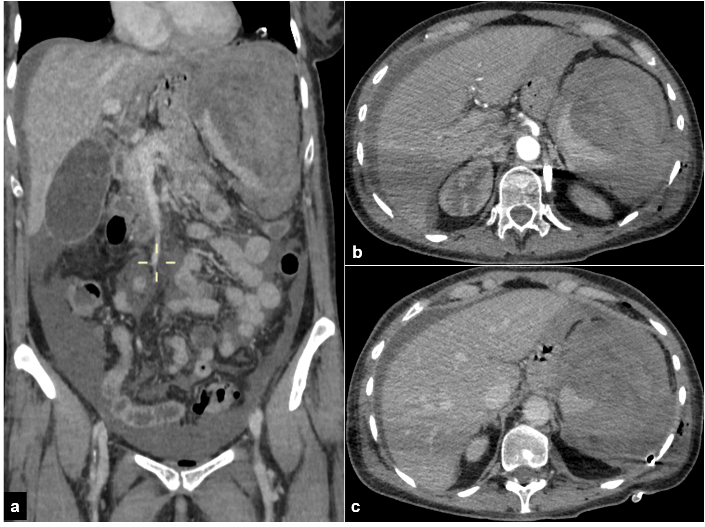 Figure 3: Completely shatters spleen on the postoperative CT-scan is evident both on a) frontal and b) & c) axial plane.

The patient remained hemodynamically stable the first 24 hours after the procedure. On the first postoperative day she started complaining intense pain on the left hemithorax that was interpreted as a consequence of the surgical approach. Few hours later the first symptoms of hypovolemic shock appeared: heart rate increased rapidly while blood pressure was reducing, and the patient started feeling restless. A total body CT-scan with contrast medium was carried out in emergency and showed a complete spleen rupture with severe local bleeding and huge hematoma (around 1000 ml) (Figure 3). The patient was sent straight to OR where the general surgeon performed an emergency open splenectomy. The patient was than admitted to ICU were she rapidly recovered from the hypovolemic shock. Post-operative CT-scan revealed also correct hardware positioning and good spine alignment (Figure 4). She was put in sitting position on the third postoperative day a started walking with supports after one week because of the leg fracture. 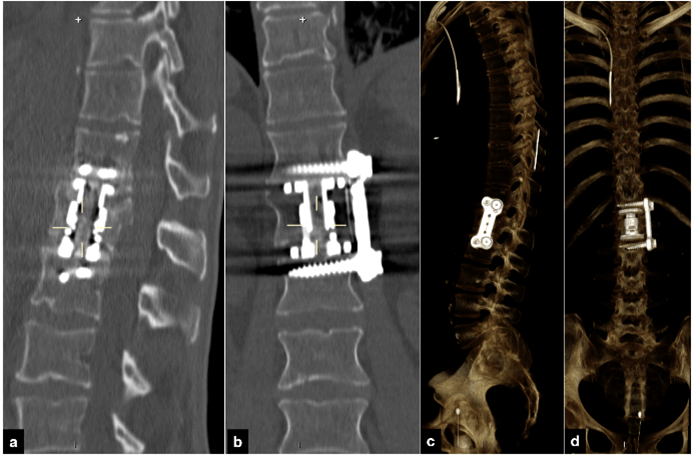 Surgical techniques for anterior column reconstruction had gone through a dramatic evolution in the last decade thanks to the introduction of expandable cages and new minimal invasive approaches. Thoracoscopic techniques have been developed and refined together with newly conceived surgical instruments in order to perform anterior corpectomy with less comorbidities [7, 8]. Unfortunately, thoracoscopy in general requires a long learning curve and a special training before a surgeon can perform it safely and quickly. To overcome these disadvantages and, at the same time, to avoid the complication related to an open thoracotomy the retropleural approach was introduced and made popular by McCormick in 1995 [9]. Thanks to the new instrumentations, such us expandable titanium cages and illuminated tubular retractors made available by the medical companies, the retropleural approach has become progressively less invasive marrying the benefits of a short learning curve by direct vision with that of tissue sparing which is typical of thoracoscopic techniques [10]. In polytrauma patients suffering from unstable spine fracture associated with borderline spleen or liver injuries being treated conservatively, safe surgical timing for spine fixation remains the open question. The simple act of putting the patient in prone position for two or three hours to perform a posterior fixation highlights the problem of the appropriate surgical timing keeping the patient reasonably safe [11].

In our case an urgent splenectomy, due to an iatrogenic 4th grade spleen lesion, became necessary 36 hours after the anterior corpectomy. The injury was possibly caused by the persistent and excessive pressure operated by the inferior blade of the retractor through the diaphragm over the spleen capsule in order to expose L2 vertebral body. Very few cases of spleen injury related to anterior approach to the thoraco-lumbar junction are reported in the literature during both thoracoscopic and standard open surgery, but never in minimal invasive retropleural approach [12-15]. In our case postoperative pain on the left side was underestimated and simply related to the surgical wound, therefore CT-scan was only performed when the first signs of hemorrhagic shock appeared.

Minimal invasive retropleural lateral approach to the thoracolumbar junction remains a safe surgical technique both for trauma and elective cases. It marries the advantages of direct vision and tissue sparing techniques. Nevertheless, in case of associated spleen injury, even negligible, we strongly suggest not to proceed with this approach as it can be life threatening. If, for anatomical reasons, anterior surgery is the only feasible and cannot be further delayed, one should consider prophylactic splenectomy before.

© 2021 Michele Cappuccio. This is an open-access article distributed under the terms of the Creative Commons Attribution License, which permits unrestricted use, distribution, and reproduction in any medium, provided the original author and source are credited. Hosting by Science Repository. All rights reserved.
DOI: 10.31487/j.SCR.2020.12.17

Figure 2: a) Total body CT-scan reveals the anatomical relationship between diaphragm, spleen (*) and L1. b) & c) Grade 2 spleen lesion with intraparenchymal hematoma <5 cm is visible on the axial plane.

Figure 3: Completely shatters spleen on the postoperative CT-scan is evident both on a) frontal and b) & c) axial plane.