Introduction: Schwannomas are the most frequent extramedullary intradural spinal tumors, accounting for approximately 24% of all nerve sheath tumors in adults. In a lower percentage of cases they may be extradural or transdural (1-19%). Intramedullary schwannomas and intraosseous schwannoma are quite rare tumors representing.
Case Description: A 74-year-old woman presented intense low back pain for a few months, associated with left cruralgia and dysesthesia spread to both lower limbs. Magnetic resonance and computed tomography examination demonstrated an extramedullary intradural osteolytic lesion located in the posterior part of the vertebral body and pedicles of L1. The patient underwent a first surgery 4 years earlier with complete removal of the tumor but after about two years she had a recurrence. She was then subjected to a new intervention of decompression, removal of the tumor and arthrodesis. The histological findings were compatible with a classical schwannoma characterized by intraosseous growth and multifocal bone infiltration.
Conclusion: We reported a rare case of intraosseous schwannoma presenting as a recurrence four years after radical surgical removal of a classic lumbar schwannoma. Only 25 cases of these tumors have been previously reported and none of them as an intraosseous recurrence.

Spinal Schwannomas are benign tumors originating from Schwann cells most frequently located extramedullary intradural and account for approximately 24% of all nerve sheath tumors in adults [1]. In a lower percentage of cases, they may be extradural or transdural (1-19%) [2]. Intramedullary schwannomas and intraosseous schwannoma (IOs) are quite rare tumors representing, respectively, less than 1% and less than 0,5% of all schwannomas. IOs usually present as osteolytic lesions that can mimic other aggressive tumors [3]. Relevant literature available about IOs is mostly represented by single case-reports of neoplasms [4]. Here we report the case of an IOs presenting as recurrence of a lumbar common schwannoma completely removed four years earlier.

I History and Radiographic Evaluation

A 74-year-old woman presented intense low back pain for a few months, associated with left cruralgia and dysesthesia in both lower limbs. Magnetic resonance (MRI) and computed tomography (CT) examinations demonstrated an extramedullary osteolytic lesion (Figure 1) located in the posterior part of the vertebral body and pedicles of L1 characterized by an endocanalar component with bilateral intra-foraminal and right extra-foraminal involvement, extending cranially along the posterior wall of T12. At MRI the neoplastic tissue was isointense on T1-images relative to muscle, inhomogeneously hyperintense on T2-images with intense enhancement following contrast material injection. 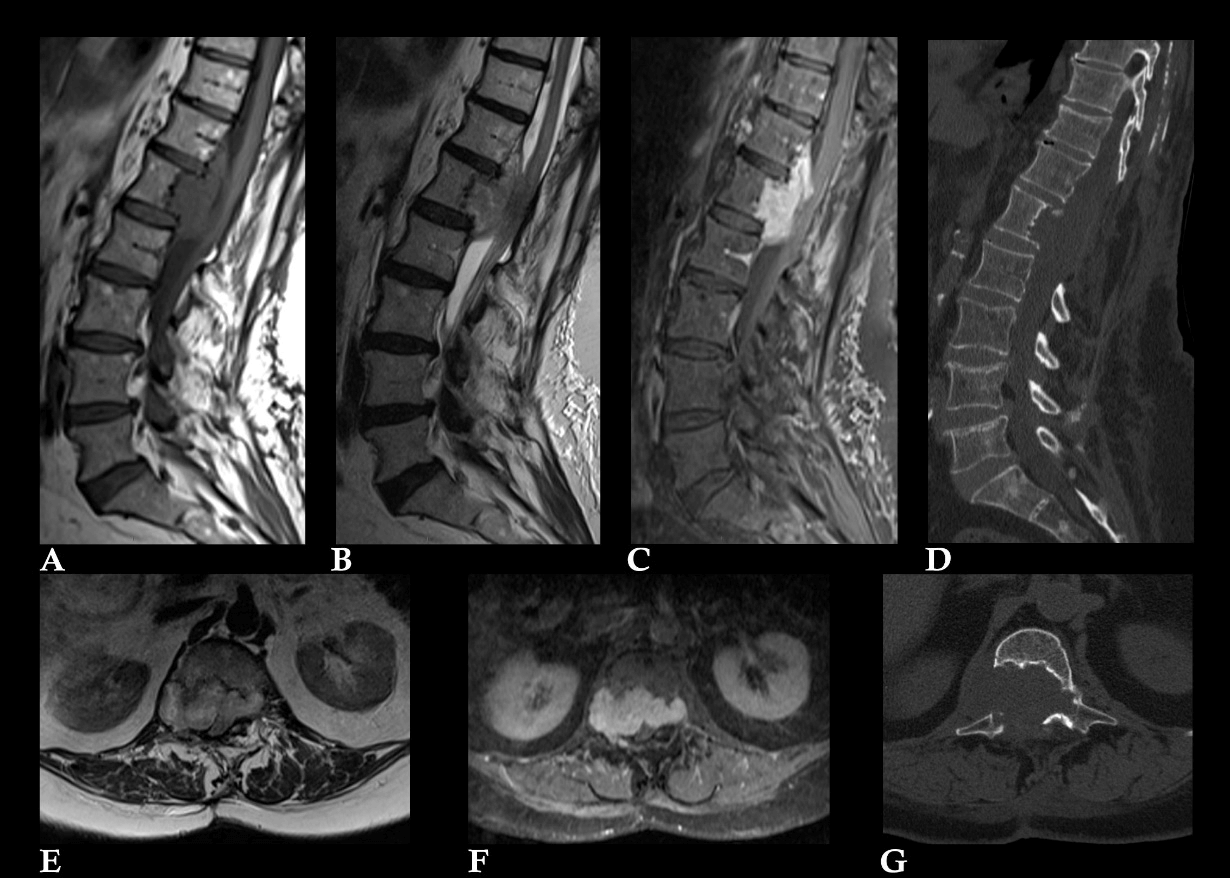 Figure 1: Preoperative MR and CT showing an extramedullary intradural lesion located in the posterior part of L1, A) isointense on T1-images, B) & E) dishomogeneously hyperintense on T2-images with C) & F) intense enhancement. D) & G) CT images demonstrate osteolysis of the posterior part of the vertebral body and peduncles of L1 with a prominent extra-osseous endocanalar and bilateral foraminal component.

Four years earlier the patient underwent complete removal of a schwannoma arising at L1. Moderate proximal paraparesis and urinary incontinence were already present after the first procedure. No recurrence was detected at the MRI control one year after surgery. Considering the anamnesis, the patient underwent surgery without a prior biopsy of the lesion.

Neurophysiological monitoring was used. After radioscopic control, scar lysis was performed with caudal and cranial extension. Lamina and articular processes were exposed from T11 to L3 with evidence of erosion of the right pedicle and transverse process of L1. Under radioscopic guidance, eight screws have been inserted (T11-T12-L2-L3). Left L1 arterectomy was also performed and the tumor was debulked from the left. The anterior part of the tumor was removed with aspiration and pituitary curettes until the residual anterior body of L1 was displayed. At the end of resection, the dural sac appeared well decompressed. The histological findings were compatible with a usual schwannoma characterized by intraosseous growth that showed multifocal bone infiltration (Figure 2A). The neoplasm had some cellular areas (Figure 2B) with some neoplastic elements characterized by greater cytokaryological atypia which can be attributed to elements with regressive/ancient atypia. The mitotic index was 1 X 10 HPF. Scattered lymphoid cells and siderophage were also noted. Immunohistochemical stainings revealed widespread positivity for S100 (Figure 2C) and SOX10 and retained expression of p16. Negative immunohistochemical for Melan A, EGFR, p53 (only a few positive cells). Ki67 labeling index was not evenly distributed and reached 10% in some areas.

After surgery, the patient presented a distal paresis of the lower left limb, with 1/5 MRC of the anterior tibial nerve and lateral peroneal nerve. A CT scan after surgery showed the correct positioning of the screws. Fourteen days after the surgery the patient was transferred to rehabilitation and showed progressive neurological recovery.

There are numerous variants of spinal schwannomas: multiple schwannomas, schwannoma with cystic degeneration, schwannoma with hemorrhage, melanotic schwannoma, intraosseous schwannoma, schwannoma growing into the foramen transversarium, large or giant schwannoma and infarcted schwannoma [5]. Even if there is little consensus on the definition of IOs, they are defined as tumors originally arising from the abutting nerve root and causing bone invasion [6]. IOs represent an extremely rare localization of schwannomas (0.7%) and arise in differential diagnosis with other intraosseous spinal lesions, such as metastasis, hemangiomas or primitive malignant tumors of the bone. What appears most likely of the different pathogenetic mechanism is that IOs is probably an intraosseous invasion of extraosseous nerve sheath tumor [6]. IOs are usually described as osteolytic lesions and the presence of neural foramen widening and vertebral body scalloping can be helpful in the diagnostic process. On MR imaging, schwannomas are typically isointense or hypointense relative to muscle on T1-weighted images and hyperintense on T2-weighted images frequently with inhomogeneous signal due to cysts formation, dense cellularity or hemorrhage [5]. Because of their benign nature, schwannomas can really increase in size before causing symptoms through mass effect. Generally, they are firm, solitary, and well capsulated. The first classification of benign spinal schwannomas, including giant and invasive lesions, proposed by Sridhar et al. in 2001 was later modified by Park et al. in 2009 [7, 8].

The latter authors proposed two additional classes: type VI (entirely intravertebral portion without intracanal component) and type VII (intraspinal tumor with erosion into vertebral bodies and extension into nerve root foramen). For cervical benign masses, the most used classification is PUTH classification [9]. IOs belong to class V, both in Sridhar and PUTH classification. The most frequent locations of spinal IOs are sacral and cervical segments, while only a few cases have been described at the thoracolumbar level. Searching the literature, a total of 35 papers on intraosseous spinal schwannomas was found. Excluding cervical and sacral localizations and malignant nerve sheath tumors, a series of 26 patients were collected and all characteristics are summarized in (Table 1). None of these included papers described the IOs as a form of recurrence of a commonly intradural extramedullary schwannoma. As shown in (Table 1), there is a slight predominance of females (15/26 patients) with a prevalence of clinical onset at less than 60 years. Only one patient was more than 70-year-old at the time of surgery. The typical presentation symptoms reported are lower back pain and lower limb weakness as in the reported patient. Surgical excision is the preferred treatment option. Those tumors are usually well encapsulated without invasion of the surrounding structures, making complete resection possible.

As shown in (Table 1) gross total resection was possible in all cases except one, with no recurrence at an average follow-up of 1 year. The present case had been operated with complete excision of lumbar schwannoma at the same level four years earlier, with no recurrence at one year follow up. The recurrence of the lesion was detected 4 years after surgery because symptoms appear. The presence of osteolytic pattern was suspected of a malignant transformation of the previous schwannoma, but the histological examination confirmed the benign nature of the tumor with a proliferation index reaching 10% in some areas. The problem of recurrence is still currently quite discussed in the literature. The rate of schwannoma recurrence following surgical resection has been reported to vary between 4% and 6% in previous surgical series. Recurrence usually occurs several years after surgery and appears to be associated with subtotal tumor removal [10]. Some recent papers have shown that the pre-operative size of the conventional spinal schwannoma and intralesional resection are the main risk factors for local post-operative recurrence [11]. Other authors argue that the probability of recurrence is associated with melanocytic and cellular schwannomas histologic variants [11]. Ancient schwannomas were originally described in 1951 by Ackerman and Taylor [12]. This term is applied to those tumors that are long standing and show evidence of degeneration, accounting for 0.8% of soft tissue tumors. Their histology findings are those seen in schwannomas, with the additional features of degeneration and mild nuclear atypia that can pose diagnostic dilemmas from the malignant counterpart [13].


The microscopic picture of a typical schwannoma shows two components. The Antoni A pattern describes focal cellular areas with whorled nerve sheath cells. Antoni B pattern has hypocellular areas. In ancient schwannomas there is a relative loss of Antoni A and pronounced degenerative changes are attributed to the vascular insufficiency during growth of the tumor and the tumor size has been correlated with progressive degenerative features. They are characterized by cystic necrosis, stromal edema, xanthomatous change, fibrosis, perivascular hyalinization, calcification and degenerative nuclei with pleomorphism and hyperchromasia [14]. The presence of this component in our case allowed us to hypothesize that, despite complete resection after first surgery four years earlier, at the time of appearance of the recurrence, characteristics of bone invasion were found. As seen in (Table 1) the mean time of follow up for intraosseous schwannoma is 1 year, not sufficiently long to see any changes in biological aggression.

In our case, the intra-osseous involvement of tumor recurrence was probably due to the presence of a cellular component despite the complete tumor resection initially achieved. As seen in (Table 1) the mean follow-up time of IOs is 1 year, an interval not sufficiently long to see any changes in biological aggression.

We reported an extremely rare case of IOs presenting as a recurrence four years after radical surgical removal of a classical lumbar schwannoma. Only 25 cases of IOs have been previously reported, none of them characterized by recurrence. Intra-osseous invasion in our patient could be explained by the presence of a cellular component of the lesion within the bone as evidenced by the pathological examination.

© 2021 Giorgio Spatola. This is an open-access article distributed under the terms of the Creative Commons Attribution License, which permits unrestricted use, distribution, and reproduction in any medium, provided the original author and source are credited. Hosting by Science Repository. All rights reserved.
DOI: 10.31487/j.SCR.2021.01.06

Figure 1: Preoperative MR and CT showing an extramedullary intradural lesion located in the posterior part of L1, A) isointense on T1-images, B) & E) dishomogeneously hyperintense on T2-images with C) & F) intense enhancement. D) & G) CT images demonstrate osteolysis of the posterior part of the vertebral body and peduncles of L1 with a prominent extra-osseous endocanalar and bilateral foraminal component.