Epilepsy is a neurological disease that consists of recurrent, unpredictable interruptions of normal brain function due to paroxysmal events called seizures, which are the output of abnormally excessive and synchronous neuronal electrical activity [1]. Epileptic seizures are one of the most common neurologic disturbances in adults, with an estimated incidence of 44-60 per 100,000 per year [2]. It is well known that seizures have deep clinical, psychosocial and economic implications that vary across different regions of the world [3]. In addition, they are associated with multiple incidence, prevalence, and mortality [4]. Although previous reports indicate several external and internal triggering factors, including sleep deprivation, hyperventilation, sensory stimulation, and psychological stress, most seizures occur unexpectedly and unpredictably [5, 6].

There is a hypothesis that climate changes and environmental temperature are important triggering factors [7]. There are reports in the literature suggesting a rational association between increasing neuronal activity and weather alterations [8, 9]. However, studies evaluating the epidemiologic data are limited so far, failing to establish the correlation between environmental conditions as an independent risk factor leading to poor prognosis. The aim of the present study is to assess the seasonal frequency of epileptic seizures regarding gender and type, in order to contribute to the understanding of seizure provocative factors and develop precautionary measures.

We evaluated patients with epilepsy, diagnosed, medically treated and actively followed up at our outpatient epilepsy clinic, at a tertiary hospital, in Athens, Greece. Patients included were >16 years old and in compliance with medical instructions. Patients should be able to recall the seizure and to keep a diary of the events. All patients were invited for a re-evaluation visit where the context of the study was explained, and informed consent was obtained. Epileptic seizures were recorded in diaries for each calendar month from December 2016 to December 2017. Seizure counts were normalized to a 30-day length.

Epileptic auras were not encountered as seizures, due to subjective nature of the symptoms. Seizures in bursts in 24 hours counted as a single event. Depending of the type, epileptic seizures were divided in three groups; generalized seizures, focal seizures without impairment of awareness and focal seizures with impairment of awareness. The study was approved from the local ethical committee. Data were collected in accordance with the principles of the Declaration of Helsinki.

We have used statistical tools as descriptive analysis, contingency tables, Chi-square goodness-of-fit tests, and general linear models (GLMs) in order to check positive/negative correlation between variables. The statistical significance level was defined as 5%.

I Seasonality of Epileptic Seizures

One hundred and forty-three (143) consecutive patients that met inclusion criteria were considered for this study (71 males and 72 females). All patients included were adults, aged 18 to 60 years old at the time of the study. In total, 1,351 epileptic seizures were recorded. Considering the seasonal total counts of events, an increasing incidence of epileptic seizures was observed during spring (March, April, May) and summer (June, July, August), (spring: 359, summer: 386). Instead, in autumn (September, October, November) and winter (December, January, February), the number of epileptic seizures was smaller (winter: 292, autumn: 314) (Figures 1-3). 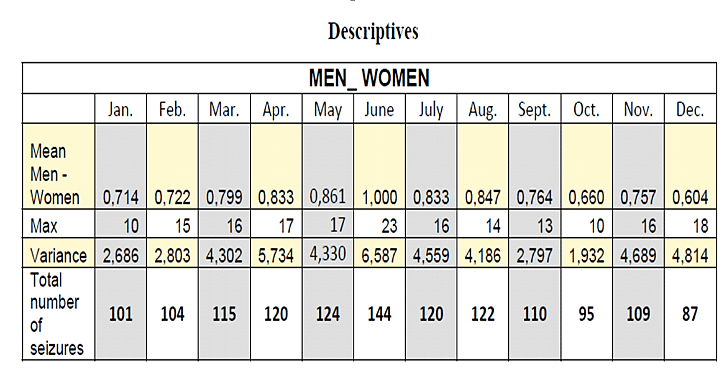 Figure 1: Total number of epileptic seizures in women and men throughout a year. 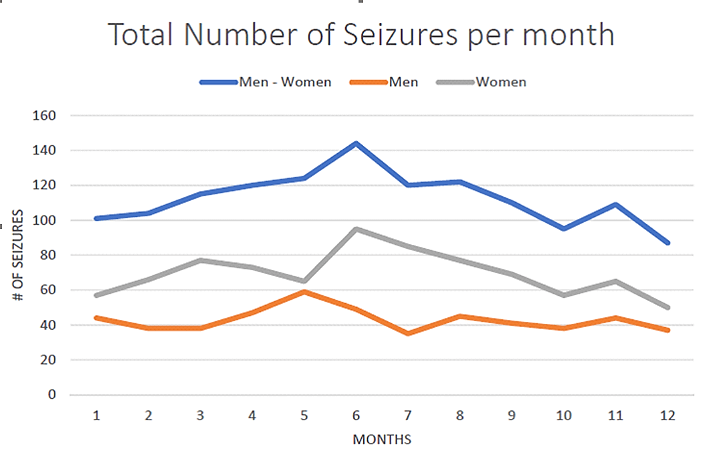 Figure 2: Fluctuation of seizures during the year. 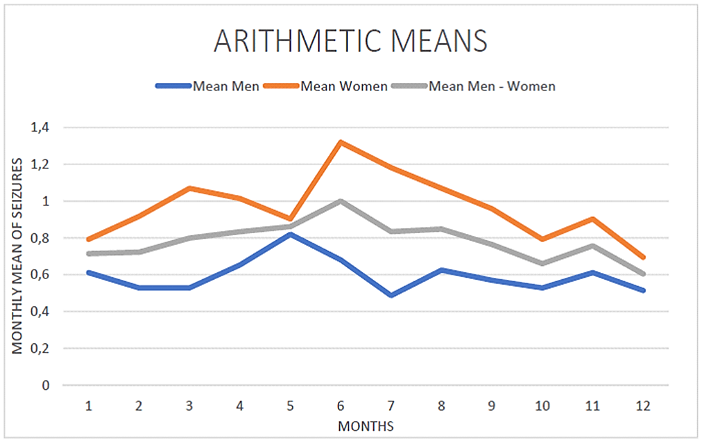 Figure 3: The frequency of epileptic seizures maximized during spring and summer.

A second important finding was the association between the type of epileptic seizure and the calendar month. Specifically, we recorded different patterns of seizure frequency depending of the seizure type through the year. Focal seizures with impairment of consciousness showed a strong association with the calendar month (p=8.567×10−6) revealing a sudden peak in June, compared to the other types (Figure 4). 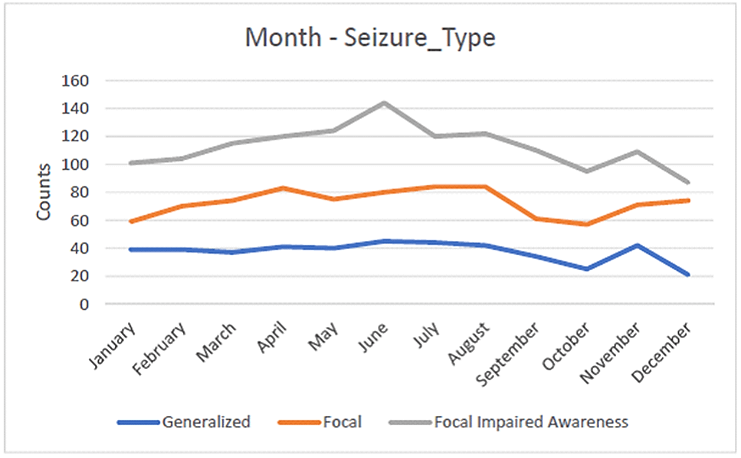 Figure 4: The incidence of focal seizures with impairment of awareness peaks suddenly during June.

This is a single-center retrospective epidemiologic study evaluating epileptic seizures during one year in order to clarify a possible seasonal fluctuation in seizures frequency. Our results underline an increased incidence of seizures in summer months, suggesting a correlation between weather conditions and epileptic episodes. The influence of weather on the occurrence of epileptic seizures has so far received only limited attention. The first studies were performed in the early 1980s and 1990s in small cohorts. No association between meteorological parameters and seizure risk was recorded [10, 11]. However, due to the small size of the sample and methodological problems, the significance of both studies is limited.

Ten years later, Rüegg et al. studied a selected group including hospitalized patients during tapering of antiepileptic therapy and drug-resistant status epilepticus [12]. It was found an increased incidence of status epilepticus on bright days. High relative humidity, high temperature, and dark days recorded as significantly protecting factors. On the other hand, the risk of nonconvulsive status epilepticus was significantly higher in summer. In another study, Bell et al. evaluated the seasonality as a risk factor for sudden unexpected death (SUDEP) in epilepsy patients, concluding there was no specific correlation between the above parameters [13]. However, it was recorded a slight excess of sudden deaths in low winter temperatures [13].

In 2010, Molta et al. found that unstable weather conditions caused an increase in the frequency of seizures in almost half of epileptic patients [14]. In 2013, Clemens et al. evaluated seizure distribution across calendar months. They found that seizure counts peaked in January and reached a nadir in August [15]. It was suggested the anticonvulsive effect of the vitamin D, in order to interpret their results. In 2017, using a hospital-based, bidirectional case-crossover study, Rakers et al. assessed the effect of atmospheric pressure, relative air humidity, and ambient temperature on the occurrence of epileptic seizure [16]. They suggested a significant association between weather conditions (low atmospheric pressure and high relative air humidity) and epileptic seizures. In our study, 143 consecutive patients met inclusion criteria.

We recorded an increased number of epileptic seizures during spring and summer. In addition, a fluctuation through the year was revealed regarding focal seizures with impairment, with a sudden peak during June. In order to interpret our results, we studied environmental conditions in Athens. According to Hellenic National Meteorological Service, during winter, highest temperature is usually up to 12 degrees Celsius, and humidity levels go up to 70 per cent. In summer, temperature rises usually more than 35 degrees Celsius and humidity up to 35 percent [17]. It is also well known that the mean duration of the day from sunrise to sunset is fourteen and half hours in summer, instead of nine and a half in winter [17]. These data illustrate weather alterations in Greece, or more precisely in Athens. It is suggested that during spring and summer, people’s lifestyle is modified.

Sleep deprivation and alcohol abuse is strongly noticed which in combination with medication negligence leads to increased epileptic susceptibility. Furthermore, due to excessive temperatures in summer, the medication storage is often not according to guidelines in which the room temperature should not exceed 25 degrees in most drugs [18]. Thus, antiepileptic medicines may lose their potency or effectiveness resulting in raised seizure frequency. Another interesting finding of the study was that the occurrence of focal seizures with awareness impairment escalated during summer. The exact interpretation is not yet clarified but a possible suggested mechanism is the drug resistance of the above seizure type.

Additionally, in a recent study, Baudet et al. attempted to explain the possible interactions among the circadian system, circadian body temperature, and seizures [19]. Evidence suggests that seizures are susceptible to circadian modulation and secondarily susceptible to many endogenous factors (hormones, body temperature, activity, sleep and wakefulness) [20]. Alterations in these factors during hot seasons could possibly explain the observed seasonality of epileptic seizures. There are two main limitations of our study: the first consists of self-maintenance of seizure diaries which permit inaccuracies and possible missing valules. The second limitation is the duration of the study.

Evaluating the impact of environment on the occurrence of epileptic seizures, we recorded a maximum incidence during summer. Further research combining different weather conditions and environments is needed to fully characterize the seasonality of epilepsy. Studying factors such as environmental conditions or the circadian rhythm, we will conclude on the seasonal pattern of seizures before clinical recommendations can be made.

© 2021 Ioanna Alexandratou. This is an open-access article distributed under the terms of the Creative Commons Attribution License, which permits unrestricted use, distribution, and reproduction in any medium, provided the original author and source are credited. Hosting by Science Repository.
DOI: 10.31487/j.NNB.2020.02.03

Figure 1: Total number of epileptic seizures in women and men throughout a year.

Figure 2: Fluctuation of seizures during the year.

Figure 3: The frequency of epileptic seizures maximized during spring and summer.

Figure 4: The incidence of focal seizures with impairment of awareness peaks suddenly during June.