Rupture of giant aneurysm of sinus of Valsalva usually requires surgery to prevent life-threatening complications from occurring. We report the case of a 55-year-old patient with a previous history of aortic valve replacement who was urgently referred to our institution with a superior vena cava syndrome and dyspnea. CT-scan initially misdiagnosed a dissection of the aortic root that was ultimately a contained rupture of a giant aneurysm of the non-coronary sinus of Valsalva. Despite a sudden hemodynamic deterioration with a collapse and cardiac arrest, urgent salvage surgery was successfully performed with an uneventful outcome. Physiopathogeny of hemodynamic profiles influencing immediate survival and surgical technique are discussed in this report.

Aneurysm of sinus of Valsalva (A-SOV) remains a rare disease with a potentially life-threatening complications [1, 2]. Most of A-SOV remain silent and manifest when there is a complication such as a rupture or, more rarely, endocarditis. The overall prognosis is good when surgery is timely performed. Nonetheless, acute rupture may have a dismal prognosis. We report the case of a 55-year-old male patient with a previous history of aortic valve replacement who experienced a superior vena cava syndrome related to a contained ruptured aneurysm of the non-coronary sinus of Valsalva (A-NCSOV). Uncommon clinical presentation, imaging features, factors influencing immediate survival, and surgical strategy will be reviewed.

Aneurysm of sinus of Valsalva (A-SOV) is a rare disease that needs to be identified in order to avoid acute rupture with a dismal prognostic when the non-coronary sinus is directly involved. Specific anatomic conditions may rarely improve immediate survival. Surgical repair is particularly demanding and requires adaptation to operative findings. This report highlighted the importance of favourable conditions for immediate survival and led us to report an original and reliable surgical technique to deal with such a difficult challenge.

A 55-year-old male patient was referred to our institution with a diagnosis of acute aortic root dissection. On admission, clinical examination showed a severe vena cava syndrome with dyspnea. The patient was hemodynamically stable. At the age of 18, the patient had undergone aortic valve replacement with a Bjork-Shiley prosthesis. Since then, he received oral anticoagulation with acenocoumarol. On admission, the International Normalized Ratio (INR) was 4.1. CT-scan initially reported a limited dissection of the aortic root (horizontal section) with 2 lumen and a pericardial effusion and clots compressing both right atrium and superior vena cava (Figure 1A). The compression was worsened by pericardial adherences. After reexamination of the sagittal section (Figure 1B), the diagnosis of a 5cm-diameter ruptured A-NCSOV was validated. The aorta above the sinotubular junction was dilated.

Figure 1: A) CT-scan horizontal section of the aortic root showing two lumens (1 and 2) surrounded by clots (cl). B) CT-scan sagittal section showing a complete rupture of the NCSOV (1) with clots (cl). The aorta is dilated (2). 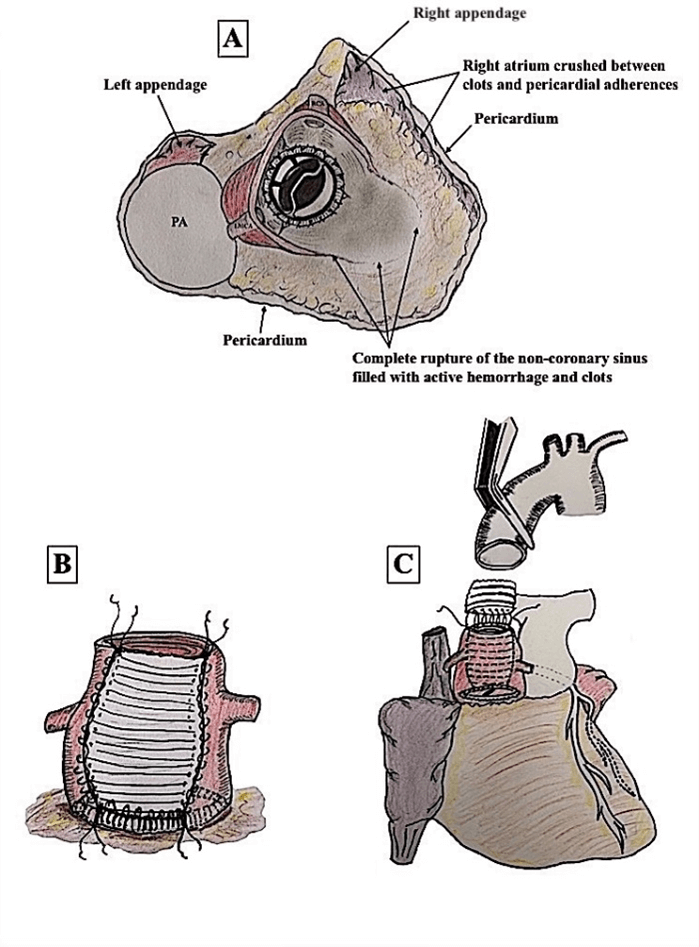 Figure 2: A) Illustration of the aortic root showing a complete rupture of the non-coronary sinus with no residual aortic wall. B) Illustration of the reconstruction of the NCSOV with a U-shaped dacron patch anchored on the collar of the Bjork-Shiley valve. C) Summary of the overall surgical procedure.

Decision was made for urgent surgery after correction of INR. Unfortunately, the patient experienced a sudden collapse with cardiac arrest requiring resuscitation maneuvers. Then, he was rapidly transferred to the operating room. Following cannulation of both femoral artery and vein, cardio-pulmonary bypass (CPB) was started, and the patient was cooled to 24°C. The resternotomy, made under ventricular fibrillation, disclosed a huge compression of the right atrium and the superior vena cava by clots and active bleeding. Surgical control of the ascending aorta was completed allowing a safe aortic-cross clamping immediately below the right brachiocephalic trunk. The aorta was transected 3 cm above the annulus showing, the Bjork-Shiley prosthesis with a complete rupture of the NCSOV (Figure 2A). Cold blood cardioplegia was completed through coronary ostia, and cardiac venting was achieved through the pulmonary artery.

Reconstruction of the non-coronary sinus was performed with a U-shaped dacron patch. The proximal part of the Dacron was directly anchored to the collar of the valvular prosthesis with a 4-0 polypropylene continuous suture since no residual aortic wall was available to consider a solid reconstruction (Figure 2B). The ascending aorta below the brachiocephalic was then replaced with a 30 mm diameter dacron prosthesis (Figure 2C). The postoperative outcome was uneventful, and the patient was discharged at the 10th postoperative day.

A-SOV remains a rare disease that needs to be identified to prevent lethal complications from occurring. Incidence ranges between 0.14% and 3.5% of patients considered for cardiac surgery in Asian cohorts versus 0.09% in the general population, with a higher incidence between 60 % and 80% among men [2, 3]. Most of A-SOV originates from the right coronary and the non-coronary sinuses and rarely from the left coronary sinus. The mechanism of sinus dilatation shows a thinning of the aortic wall between the aortic annulus and the sinotubular junction. The fragility of the aortic wall may be congenital as observed in Marfan and Ehlers-Danlos syndromes and in congenital heart disease such as ventricular septal defect (VSD) [4]. In acquired cases, A-SOV is often associated with aortic valve regurgitation [5]. Physiopathogeny of dilatation of coronary sinuses differs according to the underlying cardiac disease. Dilatation of two or three SOVs often results from dystrophic aorta involving the aortic annulus as observed in Marfan syndrome [2, 4]. On the other hand, dilatation of a single SOV may result from VSD (right or left coronary sinus) or severe aortic regurgitation for the non-coronary sinus [2-4]. In this latter location, dilatation may likely result from a higher diastolic residual pressure due to the absence of coronary ostium.

Usually, clinical course of A-SOV remains silent until compression of adjacent structures triggers different non-specific symptoms such as dyspnea, arrhythmias, or pain. Except for patients known to have medical history of aortic valvular disease, Marfan or Ehler-Danlos syndrome, or even congenital heart disease, and therefore regularly followed, the inaugural presentation is often an acute rupture. When the right coronary sinus ruptures, it generates a fistula between the aorta and the right atrium or the right ventricle which typically leads to a right ventricular failure requiring urgent surgery. Consequences of rupture of either right or left coronary sinus may be limited by vicinity of anatomic structures such as right atrium, right ventricle for the right coronary sinus and pulmonary artery for the left one with anatomic compression and fistulous trajectories. By contrast, a rupture of the non-coronary sinus is usually rapidly fatal since no anatomic structure limits bleeding into the pericardial cavity, and therefore, lethality rapidly increases [6-8].

This case is original since survival obviously resulted from close pericardial adherences and clots that limited extension of the hemorrhagic process and contributed to contain the extension of the active bleeding despite oral over anticoagulation. On the other hand, they were deleterious as they directly contributed to crush the superior vena cava and the right atrium leading to hemodynamic collapse with cardiac arrest. Eventually, the acute deterioration of hemodynamic parameters mainly resulted from compression of right cavities rather than from a massive hemorrhage as initially suspected.

Treatment of ruptured A-SOV requires surgery. Appropriate techniques depend on size and location [1, 6, 9, 10].

Three surgical approaches are usually described:
i. Through the aortic root by aortotomy.
ii. Rarely through a single receiving chamber.
iii. Through a simultaneous aortic and chamber dual approach.

Our patient had a complete rupture of the non-coronary sinus with no residual aortic wall. As the prosthetic collar of the mechanic valve was the only solid structure at the level of the annulus, decision was made to anchor the proximal part of the Dacron patch directly to the collar. To our knowledge, this surgical option has not been reported. Operative mortality for treatment of unruptured A-SOV is low (0.5%) while surgery for ruptured A-SOV ranges between 3.6-11% [1, 3-10]. Actuarial survival after surgery ranges from 93.4% to 87.1% at respectively 10 years and 15 years [1, 5-10].

In conclusion, this report highlighted the importance to detect and follow patients with risks to develop A-SOV and the role of pericardial adherences to influence immediate survival. Additionally, we reported an original technique to reconstruct the NCS.

© 2021 Daniel Grandmougin. This is an open-access article distributed under the terms of the Creative Commons Attribution License, which permits unrestricted use, distribution, and reproduction in any medium, provided the original author and source are credited. Hosting by Science Repository. All rights reserved.
DOI: 10.31487/j.SCR.2021.01.09

Figure 1: A) CT-scan horizontal section of the aortic root showing two lumens (1 and 2) surrounded by clots (cl). B) CT-scan sagittal section showing a complete rupture of the NCSOV (1) with clots (cl). The aorta is dilated (2).

Figure 2: A) Illustration of the aortic root showing a complete rupture of the non-coronary sinus with no residual aortic wall. B) Illustration of the reconstruction of the NCSOV with a U-shaped dacron patch anchored on the collar of the Bjork-Shiley valve. C) Summary of the overall surgical procedure.