The intrauterine device (IUD) is a very commonly used contraceptive method among fertile women due to its high efficacy and safety. A very rare complication is uterus perforation and migration to the abdominal cavity, with injury of structures nearby. In this work three cases are reported with different organ involvement and a review of uterus perforation is made.

The intrauterine device (IUD) is one of the most frequently used reversible contraceptive methods due to its high efficacy and safety, easy use, low cost and long acting duration. It is a contraceptive option almost as effective as surgical sterilization. However, a rare but serious complication is uterine perforation and migration of the IUD into the abdominal cavity, with the possibility of affecting neighbouring organs such as the intestine or the bladder. We present three clinical cases of uterine perforation, one with involvement of the cecal appendix, another with perforation of the intestine and another with the involvement of the mesosigma.

A 39-year-old woman went to the gynaecologist for an IUD replacement. Due to the impossibility of extraction, a hysteroscopy was requested. Through hysteroscopy it was possible to see the IUD embedded in the wall of the uterus (Figure 1). The IUD could not be removed by usual traction, which caused moderate pain, we decided to remove the IUD under anaesthesia and guided by laparoscopy, so that bilateral salpingectomy could also be made as the patient’s reproductive goals had been achieved. Programmed laparoscopy was performed and a plastron adhered to the fundus of the uterus was visualized that was mobilized when the IUD was pulled out through the hysteroscope. Dissection was performed, the end of the IUD was identified, perforating the wall of the fundus of the uterus and in contact with the cecal appendix, also included in the plastron (Figure 2). Once the appendix was separated, the complete device could be removed by traction with a hysteroscopic clamp. The surgery was completed with appendectomy and bilateral salpingectomy. The post-operative period was favourable and the patient was discharged one day after surgery. 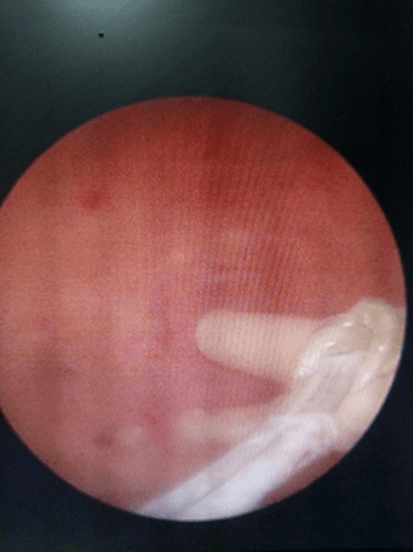 Figure 1: Case 1, Hysteroscopy: IUD embedded in the fundus of the uterus. 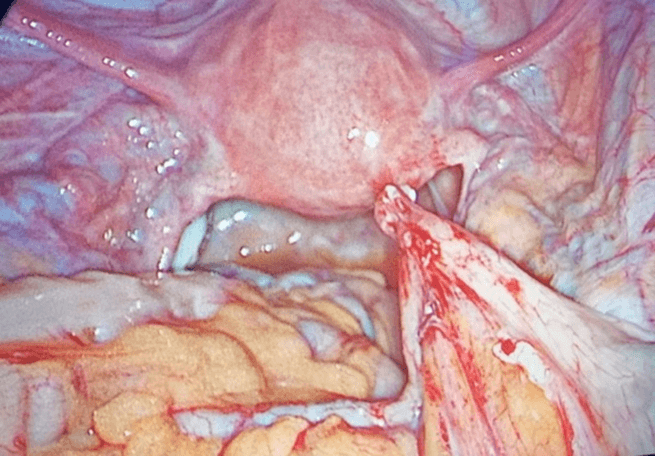 Figure 2: Case 1, Laparoscopy: cecal appendix and plastrón in contact with uterus where IUD has perforated.

A 34-year-old female used IUD for 3 years that was impossible to remove through hysteroscopy because it was nailed to the uterine fundus. As in case 1, extraction was scheduled under anaesthesia and controlled by laparoscopy and a small intestine loop was seen attached to the uterine fundus and moved when the IUD is pulled. The IUD had punctured the uterus and an intestinal loop. Laparotomy was performed for intestinal resection and termino-terminal anastomosis, and the IUD was removed from the uterine fundus.

A 32-year-old woman went to Medical Emergencies for discomfort in hypogastrium 1 month after IUD insertion. As personal background, two weeks after its insertion the IUD had not been seen on physical examination or ultrasound. It was believed that there had been spontaneous expulsion and the professional decided to insert a new IUD. An abdominal X-ray was performed in the emergency room and two IUDs were displayed, one inside the uterus and the other one in the abdominal cavity (Figure 3). Laparoscopy was performed and the IUD that was outside the uterus and in the thickness of the mesosigma was extracted (Figure 4). 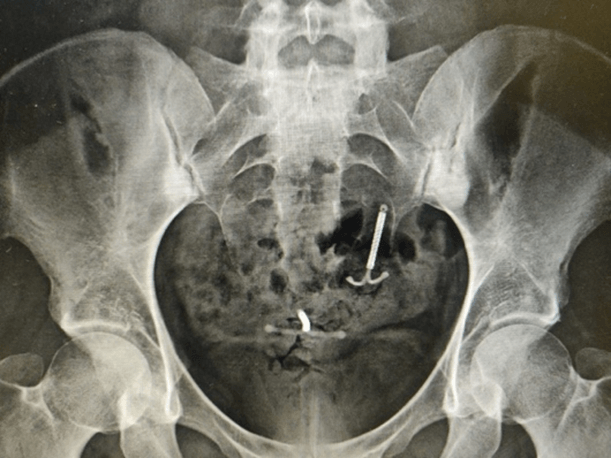 Figure 4: A & B) Case 3, Extraction of IUD cupper embedded in mesosigma.

The most common side effects after IUD insertion are pain and irregular bleeding. The most serious complications are rare and include expulsion, inflammatory pelvic disease (increased risk in the first 20 days), contraceptive failure (0.2-0.8% in the first year) with an increased risk of ectopic pregnancy if failure occurs, and perforation (0.01%) [1]. Good clinical practice guidelines recommend clinical and ultrasound monitoring 4-6 weeks after IUD implantation. In case the IUD is not visualized, there should be a high suspect that it could be in the abdominal cavity and abdominal x-ray examination should be done to exclude it before introducing a new IUD [1]. Even though there is suspect of IUD expulsion such as in Case 3, IUD migration should always be excluded.

Uterine perforation is a very rare but well known complication. Its risk is higher in stenotic cervix, uterine malpositions (severe anteflexion or retroflexion), altered uterine anatomy, immediate postpartum (first six months), menopause, lactation, and it is also related with professional inexperience [2]. It usually occurs at the time of insertion, although it may also occur years later. The perforation may be partial, with a part of the device inside the uterine cavity, or complete with the complete device in the abdominal cavity [3]. After perforation, in the case of complete perforations, the IUD can migrate to any site in the abdominal cavity, being more frequently in the pouch of Douglas, or attached to sigmoid colon or omentum. There are published cases of IUD migrated to the bladder, appendix, stomach or small intestine. Perforation may be associated with damage of neighbouring viscera such as intestine, colon or bladder [3].

Clinical presentation may be from asymptomatic cases or non-specific symptoms, which is described to be the most frequent and whose diagnosis is usually accidental by imaging tests, to others with severe symptoms such as pelvic, urinary or gastrointestinal pain [4, 5]. The clinical presentation of Case 1 was different from the usual one, not being the pain secondary to the perforation itself but was presented 5 years later trying to remove it without success. Since it was attached to the appendix, when the IUD was being pulled out, the attached appendix was too, causing severe pain. The lack of symptoms is also surprising in Case 2 where clear involvement of an intestinal loop was identified.

In case of injury of adjacent organs, the extraction of IUD should be done independently of the symptomatology, such as Case 2. In contrast, management of asymptomatic intraperitoneal IUDs is controversial, but in general practice when uterus perforation is diagnosed, most devices should be removed [3, 6-9]. There is risk of intestinal obstruction, adhesion formation, intestinal or mesenteric perforation, intestinal infarction, rectal-uterine fistulas appendicitis (Figures 4A & 4B) and abscess formation [3, 9-12]. The World Health Organization (WHO) recommends the removal of IUDs whenever possible in order to avoid the complications described [13]. Unless the surgical risk is very high, the recommended attitude towards an IUD migrated in asymptomatic cases will be surgical removal by laparoscopy or laparotomy, individualizing each case [6-8].

However, some authors recommend conservative management in certain asymptomatic patients, based on the risk attached to abdominal surgery and anaesthesia. Adoni and Ben Chetrit, in a series of asymptomatic cases, found no adhesions and concluded that surgery is not mandatory in this group [14]. In Case 1, despite being asymptomatic, we had no hesitation in scheduling the extraction because it was a young patient, in which contraception had to be ensured and it was not provided with a locked and expired IUD. Furthermore, the appendix adhesion could cause severe complications such as obstruction or appendicitis.

When deciding whether or not to act in asymptomatic patients, one should consider the risks that the patient might face with conservative management, such as the migration of the IUD to a higher-risk area with the result of more complicated surgery, the risk of complications previously described, psychological problems in the patient who knows that has a foreign body in the abdomen, and finally, the medicolegal repercussions of a treatment not performed. All this is more in favour of surgical intervention in all cases including the asymptomatic ones [15]. Abdominal x-ray of case 3 was so surprising that treatment without surgery was not proposed at any time. An urgent laparoscopy was quickly indicated and the case was resolved without incident. We are satisfied with the active surgical approach and recommend it in all cases except those of high surgical risk, where patient informed consent and strict follow-up are recommended.

Uterine perforation in patients with IUD should be suspected at the time of its introduction and the first month mainly, but also at the time of its removal. In case of inability to remove the IUD by hysteroscopy, we recommend the extraction under anaesthesia and with laparoscopic control due to the possibility of perforation and involvement of neighbouring organs.

© 2021 Begoña Alcaraz Freijo. This is an open-access article distributed under the terms of the Creative Commons Attribution License, which permits unrestricted use, distribution, and reproduction in any medium, provided the original author and source are credited. Hosting by Science Repository. All rights reserved.
DOI: 10.31487/j.SCR.2021.02.20

Figure 1: Case 1, Hysteroscopy: IUD embedded in the fundus of the uterus.

Figure 2: Case 1, Laparoscopy: cecal appendix and plastrón in contact with uterus where IUD has perforated.

Figure 4: A & B) Case 3, Extraction of IUD cupper embedded in mesosigma.