Recurrent pyogenic cholangitis is a chronic infection characterized by intrahepatic biliary stones and strictures. Escherichia coli is the commonest infecting organism. This disease is very common in East Asia but infrequent in Western countries, and few reports have been published in European series. The therapeutic approach for hepatolithiasis is highly individual and includes antibiotic therapy, endoscopic and percutaneous biliary drainage with stone removal and dilation of strictures, surgical resection of affected liver segments and liver transplantation. We report two cases of RCP in Chinese patients treated with liver transplantation at our center out of the 34 published in the literature.

Recurrent pyogenic cholangitis (RPC), or previously called oriental cholangitis, is characterized by multiple strictures of the biliary tree, impaired biliary drainage, formation of intrahepatic biliary pigment stones and recurrent bouts of cholangitis. The disease is common in East Asia with prevalence ranging from 1,7% to 53,5% but is rare in the West with prevalence in the range of 0,6-1,3% [1-7]. It occurs with equal frequency in men and women with a peak incidence between the third and fourth decades of life, although it can also be seen in patients over the age of 60. The underlying mechanism of RPC is unclear, but most experts believe that RPC is initiated by helminthic infection of the bile ducts and/or sludge/stone formation from deficient glucuronidation as a consequence of profound malnutrition. Intrahepatic lithiasis is associated with complications such as biliary strictures, acute cholangitis, liver abscess, liver atrophy, secondary biliary cirrhosis (SBC), portal hypertension and hepatic failure. Furthermore, it is an important cause of intrahepatic cholangiocarcinoma (CC) [2, 6].

The therapeutic approach for hepatolithiasis in RPC should be highly individual and includes a wide range of options, such as antibiotic therapy, endoscopic retrograde cholangiopancreatography (ERCP) and percutaneous biliary drainage with stone removal and dilation of strictures, surgical resection of affected liver segments and liver transplantation (LT) (Table 1). A young patient with multiple surgical procedures developing SBC is the patient profile for transplant candidates. LT remains arguably valid option in this group of patients, even in situations which there is no cirrhosis, notwithstanding controversy from a medical, economic, and ethical grounds.

A 35-year old-male presented with an acute bacterial cholangitis. He was born in China and relocated to Barcelona, Spain, a year before. Cholecystectomy had been previously performed in his country due to symptomatic cholelithiasis thirteen years before. Following cholecystectomy, he had developed two episodes of cholangitis. In our institution, computerized tomography (CT) suggested multifocal segmental strictures and biliary dilatation with significant amount of biliary sludge in both intrahepatic and extrahepatic bile ducts. In addition, the liver parenchyma appeared to have chronic liver disease with portal hypertension including splenomegaly and without ascites. An ERCP was performed with biliary sphincterotomy and a balloon-trawl was attempted to remove all the stones, a plastic prosthesis of 8,5 F and 12 cm in length was placed with good drainage (Figure 1A). 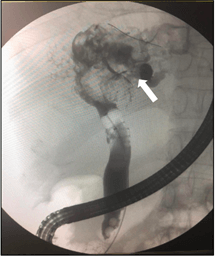 Laboratory values showed thrombocytopenia (platelets 90x10E9/L), hyperbilirubinemia (10 mg/dL), prothrombin time of 78%, albumin 40 g/L and normal renal function (creatinine 0,96 mg/dL with glomerular filtrate rate >90 mL/min/1.73 m2). Upper endoscopy confirmed the presence of grade 2 varices. Given these epidemiological, clinical, and imaging findings a diagnosis of RPC was made with compensated SBC, and the patient was listed for LT with a MELD score of 29. Sixty days after listing an orthotopic LT with an hepaticojejunostomy was performed (Figure 1B). 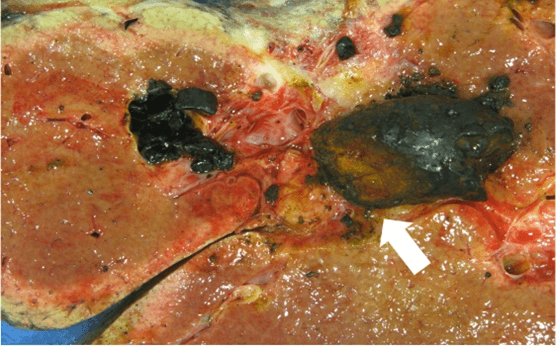 The recovery was uneventful and the patient was discharged at 20th postoperative day with tacrolimus-based immunosuppressive therapy plus mofetil mycophenolate and steroids. Pathological findings showed multiple intrahepatic lithiasis consistent with RPC, on an SBC with signs of chronic cholangitis and intraductal papilomatosis with low grade dysplasia and without parasitic forms. The patient remains well five years after, without any episodes of rejection or other complications.

A 40-year-old-male was referred to our hospital because of abdominal pain and abnormal liver function tests. The patient was originally from China and had moved to Barcelona (Spain) 1 month earlier. Cholecystectomy and T-tube insertion had been performed 2 months before in China due to complicated gallstones disease. At admission, the patient was afebrile. A CT scan showed dilatation of intra and extrahepatic biliary tree with multiple gallstones and liver with signs of chronic liver disease with portal hypertension without splenomegaly or ascites. A magnetic resonance cholangiopancreatography demonstrated atrophy of the left liver lobe in combination with bile duct dilation and multiple intrahepatic calculi. An ERCP to remove biliary stones was unsuccessful and got complicated with a duodenal perforation (Figure 2A). 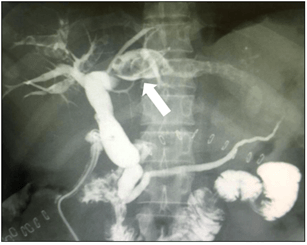 It was managed conservatively with a good outcome. Laboratory values revealed platelets 152 x10E9/L, total bilirubin was 0,7 mg/dL, albumin 51 g/L and a normal renal function (creatinine 0,77 mg/dL with glomerular filtrate rate >90 mL/min/1.73 m2). Upper endoscopy was unremarkable. A liver biopsy showed bridging fibrosis (F4 METAVIR Scoring System). Following this first episode, the patient required multiple hospital admissions for cholangitis in keeping with our clinical diagnosis of RPC with hepatolithiasis. We finally advised LT given the presence of multiple and recurrent episodes of cholangitis on a background of SBC (MELD score of 6). One year later, a LT with Roux-en-Y anastomosis was performed without any complication (Figure 2B). Recovery was uneventful and patient was discharged with tacrolimus-based immunosuppressive therapy plus mofetil mycophenolate and steroids. The pathology report confirmed multiple intrahepatic lithiasis consistent with RPC, on an SBC with signs of chronic cholangitis. 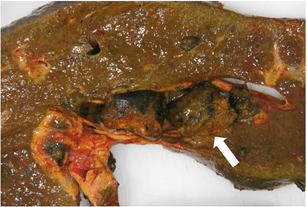 The patient had an unremarkable follow up although four years after LT was admitted to the hospital because of septic shock due to ascending cholangitis. A CT scan showed a heterogeneous liver parenchyma with multiple ischaemic areas and no dilation of the biliary tract was observed. Invasive monitoring, hospitalization in intensive care unit, inotropic and ventilation support were required. A fluid resuscitation and piperacillin-tazobactam therapy was performed. Escherichia coli was identified in blood cultures. The patient recovered satisfactorily and was discharged one month later. After one year of follow-up the patient has remained asymptomatic.

The present reports demonstrate that a favourable outcome can be achieved with liver transplantation in recurrent pyogenic cholangitis complicated with secondary biliary cirrhosis. The diagnosis of RPC should be suspected when patients present with acute cholangitis and imaging scans showed a rather abnormal and distorted biliary tree, including the combination of some of the following features: strictures, biliary lakes and dilated intrahepatic ducts, liver abscesses and even parenchymal atrophy [6]. Diagnosis is confirmed by histology, often after surgery or biopsy.

The therapeutic goals when the management of RPC should include: 1) control of the acute biliary sepsis ideally with decompression of the infected biliary tree (by percutaneous transhepatic biliary drainage or endoscopic sphincterotomy with or without biliary stent placement), 2) complete clearance of calculi and particulate debris from the biliary tract (via percutaneous transhepatic cholangioscopy lithotomy), 3) the elimination of bile stasis which is essential for preventing recurrent cholangitis and stone formation [4]. The management and the prognosis of RPC vary significantly, depending on the location and extent of the calculi, strictures, or abscesses in the biliary tree. Moreover, the different therapeutic options will equally depend on patients’ comorbidities and whether we suspect the presence of chronic liver disease. Due to its complexity of the treatment, there is yet to be a consensus regarding the optimal approach [6]. Initial medical management can fail and patients, often with acute suppurative cholecystitis may require urgent cholecystostomy, choledochostomy or percutaneous cholecystostomy as an interim measure. Definitive surgery is directed toward optimizing biliary outflow and is determined by the anatomical extent of involvement and liver function.

T-tube insertion combined intraoperative cholangioscopy, removal of intrahepatic stones and lithotripsy, and should be considered for patients with hepatolithiasis. Nevertheless, stone recurrence and repeated cholangitis have been reported in more than 30% of cases [1]. Biliary stone recurrence could appear also after cholecystectomy. In patients with dilated intrahepatic and extrahepatic bile tree with intrahepatic stones, ERCP remains the preferred interventional procedure. However, ERCP is related to a high rate of complications 6% and fatalities around 0.33% [8].

Chen et al. have published the largest series of surgical treated hepatolithiasis (n=1431) [6]. Residual stones were significantly higher in surgical procedures (13.4%) than in LT (0%) and no differences in wound infection, pneumonia, bile leakage, pleural effusion, hemorrhage, liver failure, septicemia or abdominal infection were found between groups. Noticeably, morbi-mortality associate to surgical procedures in the management of hepatolithiasis is not negligible (6-26%) [6].

While in US and Europe the relationship between RPC and CC is not fully recognized, in Est-Asia, the relationship between RPC and CC is well established [6]. Chronic inflammation of bile duct epithelium by intrahepatic stones and infected bile appears to be a related risk factor. Diagnosis of CC in association with hepatolithiasis can be difficult in preoperative imaging. In the series of Chen et al. hepatolithiasis and CC at the time of hepatectomy was seen in 10% of cases and it was only diagnosed preoperatively in half of them [6]. Similarly, Co et al. in a review of 80 patients undergoing surgery for RPC, found that 4 (5%) patients developed CC after initial resection [9]. Theoretically, LT is a curative treatment for RPC that could also eradicate the risk of developing CC as well as treating the possible underlying liver parenchymal chronic disease. CC should be suspected in patients with clinical deterioration (such as worsening jaundice and weight loss) or with unexplained increases in liver cholestatic measures. Despite the risk of developing a CC, the benefit of screening patients for CC has not been established [10, 11].

LT should be considered as a possible option of treatment for end-stage RPC [6]. The main indication for LT in hepatolithiasis is SBC with portal hypertension although non-cirrhotic patients are also candidates if present recurrent cholangitis with residual stones requiring multiple hospitalizations. Most of them will have had surgery before undergone the LT procedure (Table 1). Based on the review of published cases, a young patient with multiple surgical procedures developing SBC is the patient profile for transplant candidates. From all reported cases, overall survival after LT is 100%.

In our experience, LT is a definitive and safe therapy that offers an excellent prognosis for patients with RPC.

© 2021 Concepción Gómez-Gavara. This is an open-access article distributed under the terms of the Creative Commons Attribution License, which permits unrestricted use, distribution, and reproduction in any medium, provided the original author and source are credited. Hosting by Science Repository. All rights reserved.
DOI: 10.31487/j.SCR.2020.12.21