Pulmonary sequestration is a rare congenital malformation whereby abnormal lung tissue forms that do not communicate with the tracheobronchial tree. Pulmonary sequestration receives its blood supply via single or multiple vessels, typically arising from the systemic circulation. Symptoms can include a chronic or recurrent cough, respiratory distress, hemoptysis, or pneumonia. Management typically involves treatment of symptoms, sometimes requiring surgery. This case reviews the clinical presentation, work-up, and management of pulmonary sequestration presenting in an adult patient.

Pulmonary sequestration, or bronchopulmonary sequestration is a rare congenital lung malformation that appears to be a result of abnormal budding of the foregut during embryonic development [1]. Tissue from an accessory lung bud migrates with the developing lung but does not communicate with the bronchopulmonary tree. The sequestration receives its blood supply from one or more anomalous systemic arteries: either from the abdominal aorta (73%), thoracic aorta (18%), or multiple arteries (15%) [1]. Rare, documented origins include the ascending aorta and arch, innominate, subclavian, celiac, right coronary, and circumflex arteries [1].

This condition was described by Pryce in 1946, although Rokitansky and Rektorik described similar clinical findings back in 1861 [2]. Pryce divided pulmonary sequestration into extra- (ELS) and intralobar (ILS). Extralobar sequestration occurs when the accessory lung bud develops later in embryonic development. This sequestration forms outside of normal lung tissue, either above, within, or below the diaphragm, encased by its own visceral pleura. It accounts for 25% of pulmonary sequestrations [1]. Most extralobar sequestrations lie between the lower lobe and diaphragm, usually in the region of the posterior basal segments and are more commonly left-sided than right-sided lesions [3]. ELS is frequently associated with other congenital extrapulmonary anomalies such as congenital diaphragmatic hernia, vertebral defects, cystic adenomatoid malformation, tracheoesophageal fistula, and bronchogenic cysts [4]. Venous drainage occurs via the systemic circulation, often the azygos, hemiazygos, or lower lobe pulmonary veins [1]. Patients typically present in infancy with symptoms of respiratory distress and chronic cough [5].

Intralobar sequestration is a result of the accessory lung bud developing before the development of pleura, within the normal lung tissue [6]. Intralobar sequestration accounts for 75% of pulmonary sequestration, affecting males and females equally [1]. It is not associated with other congenital abnormalities. Venous drainage is via the pulmonary circulation. ILS is often asymptomatic, but symptoms can include recurrent pneumonia, dyspnea, chronic or recurrent cough, and hemoptysis [5]. ILS is typically diagnosed in childhood but can present in adulthood when the patient presents with a respiratory tract infection, as in our case [2]. Diagnosis requires identification of the lesion and evaluation of the systemic arterial supply and venous drainage using CT or MRA. CT can reveal a cyst, mass, or an encapsulated lesion with air-fluid levels [1]. For the few reported cases in adults, the diagnosis was mainly via histopathologic examination of the surgical specimen [6]. The following case presentation highlights the clinical presentation of this rare condition in an adult and its management.

A 31-year-old female with a past medical history of hypertension and TIA, initially presented to the emergency room with shortness of breath and chest pain for one day. She also reported a non-productive cough and subjective fever. The patient mentioned she had multiple family members with COVID-19. She denied a history of tobacco or illicit drug use. Her physical exam was normal, as were her vitals. She tested negative for SARS-CoV-2. A chest X-ray revealed a right lower lobe infiltrate compatible with community-acquired pneumonia (Figures 1 & 2). She was discharged with Azithromycin. 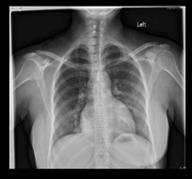 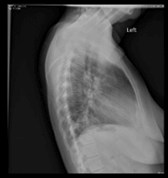 Figure 2: Lateral view of the chest X-ray from the initial visit.

The patient returned to the emergency room 10 days later with shortness of breath on exertion, nausea, and vomiting. She had completed her course of Azithromycin without resolution of her symptoms. Again, her physical exam was normal. She was tachycardic, tachypneic, and hypertensive on this visit. She had a leukocytosis of 12.8 K/UL, potassium of 2.9 mmol/L and troponin I within normal limits. Her chest X-ray revealed her right lower lobe infiltrate unchanged since the last visit. She was discharged home with 5 days of Azithromycin and Levofloxacin and a referral to Cardiology and Pulmonology for further work-up. 11 days after discharge, the patient returned with a productive cough, “yellowish” sputum, pleuritic chest pain, nausea, vomiting, diarrhea, and intermittent fevers for four days. She had decreased breath sounds and crackles on the right lower side, along with tachycardia. Her labs revealed a leukocytosis of 14.8 K/UL, with a neutrophilia of 85.6%. She tested negative for SARS-CoV-2, Influenza A and B, and RSV. A CT angiogram of the chest was obtained to rule out a pulmonary embolism. Consolidation was noted in the right lower lobe with the blood supply to the area arising from the descending thoracic aorta, consistent with pulmonary sequestration (Figures 3 & 4). Upon evaluation of the patient and review of the imaging, a decision was made to take the patient to the operating room for a right video-assisted thoracoscopic surgery (VATS) with right lower lobectomy. 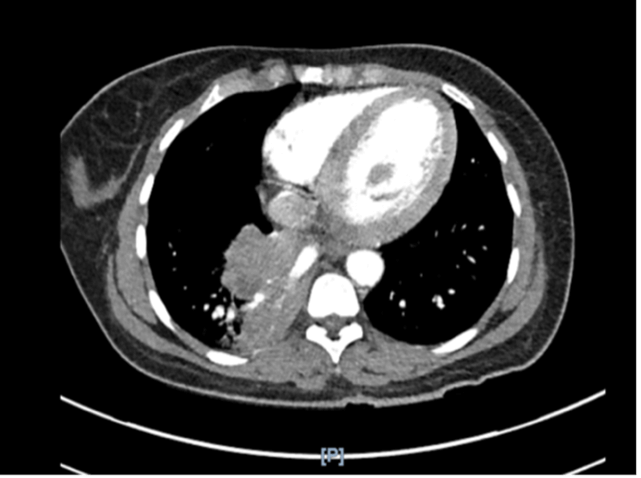 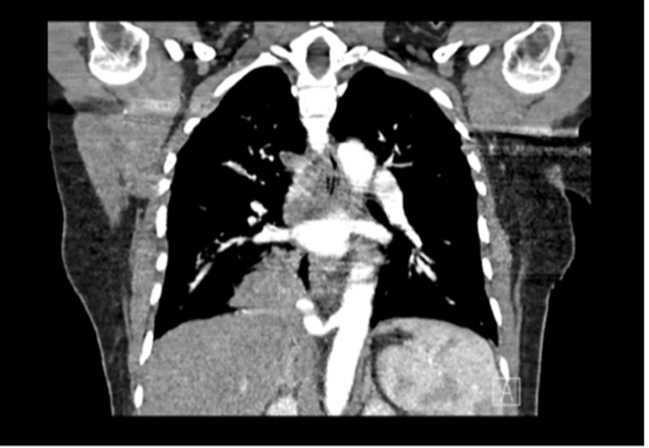 The patient was placed in a right lateral decubitus position with the table flexed at 30 degrees between the level of the nipples and umbilicus. A 30-degree lens was used to enter the thoracic cavity. VATS exploration identified the affected right lower lobe. The right lower lobe was retracted superiorly and a single artery arising from the descending aorta, supplying the sequestration, was identified. The artery was carefully dissected out and stapled off with a 45 mm purple load stapler. Branches of the right pulmonary artery and vein at the hilum were identified and divided in order to resect the lower lobe. After transection of the right inferior lobar bronchus, the patient began to bleed profusely. It was unclear where the bleeding was coming from. Hemostasis was unable to be achieved due to poor visualization, so a swift decision was made to convert to a right lateral thoracotomy. Exploration of the right thoracic cavity revealed bleeding coming from the right lower lobe. A 45 mm purple load was used to resect the right lower lobe, achieving hemostasis. On examination of the specimen, it was noted to be filled with pus. The final pathology confirmed a right lower intralobar sequestration. The patient’s postoperative course in the hospital was relatively uneventful. She was discharged 10 days after her initial arrival at the hospital. She later returned to the emergency room three days after discharge with complaints of postoperative pain and dyspnea. Chest X-ray revealed a right small apical pneumothorax and postoperative changes in the right lower segment, unchanged since discharge. She had similar complaints on outpatient follow-up with thoracic surgery and was prescribed a modified pain regimen. Her symptoms resolved on a subsequent visit.

Pryce subdivided intralobar sequestration into three types: Pryce types I, II, and III [7]. Our patient had a Pryce type III, in which an anomalous artery supplied the right intralobar sequestration (Table 1). This is fascinating in the sense that in a retrospective study published in the European Journal of Cardio-Thoracic Surgery, it was noted that ILS was two times more frequent in the left lower lobe than in the right [8]. An exception to this preponderance is in a condition known as Scimitar syndrome (partial anomalous pulmonary venous drainage of the right lung), whereby these lesions are commonly right-sided [6]. 60% of intralobar sequestrations are diagnosed before the age of 20 or younger; however, it is the principal type found in adults [6]. Nearly half of adult patients with pulmonary sequestration are asymptomatic and 30% are incidental findings [6]. The most common clinical presentation is recurrent pneumonia in a localized lung segment [6]. A retrospective review by Xiao et al., revealed that about 63% of sequestrations were diagnosed after surgery [8]. It was especially important for our patient to have a preoperative diagnosis prior to undergoing surgery because of the serious complications attributed to this condition. Complications in adults include: hemoptysis (due to high pressure in systemic vessels), recurrent infection, and chronic or recurrent cough [9]. Other reported complications include: heart failure, aspergillosis, tuberculosis, and malignancy [9]. Lobectomy is the treatment of choice for established pulmonary sequestration. In asymptomatic patients, however, there is a lack of clear evidence to show the benefit between pre-emptive surgery and observation in an asymptomatic patient. The postoperative complication rate in a retrospective review done in Mayo Clinic Minnesota was 28%. Coil embolization has emerged as an alternative to surgery; however, the recurrence rate is 25 to 47% [1]. Some authors have explored the role of preoperative embolization in minimizing bleeding risk [1]. Perhaps this may have prevented the life-threatening hemorrhage that occurred during our case.

Although surgery is the standard of treatment, perhaps embolization of the feeding vessel or preoperative embolization may reduce the intraoperative hemorrhagic complications. It does appear that surgery is the gold standard of treatment for symptomatic patients; however, a multidisciplinary approach is optimal to ensure appropriate management of this condition. Nevertheless, appropriate preoperative imaging and proper surgical planning prior to surgery are imperative for successful operative and postoperative outcomes.

© 2021 Oyinem Odumah. This is an open-access article distributed under the terms of the Creative Commons Attribution License, which permits unrestricted use, distribution, and reproduction in any medium, provided the original author and source are credited. Hosting by Science Repository.
DOI: 10.31487/j.SCR.2022.06.02

Figure 2: Lateral view of the chest X-ray from the initial visit.