Background: Mucormycosis is a rare, aggressive, and fatal infection caused by fungi of the Mucorales order of Zygomycete fungi. Mucormycosis is mainly found in patients with chronic conditions, and clinical cases are observed only in immunocompromised patients and patients with uncontrolled diabetes mellitus. Rhinocerebral type is the most prevalent type of mucormycosis which has a characteristic method of spread. Although the involvement of cranial nerves is not common, it can be multiple with facial nerve involvement.
Case Presentation: We described an unusual route of fungus spread in a 50-year-old woman with the involvement of many cranial nerves, without obvious necrosis or significant involvement of paranasal sinuses. Pterygopalatine fossa was a way to spread mucormycosis.
Conclusion: In every diabetic patient with cranial nerve palsy and sinusitis, invasive mucormycosis must be considered.

Mucormycosis, a fatal sinonasal fungal infection, is caused by fungi of the Mucorales order of Zygomycete fungi [1]. Mucormycosis is primarily observed in patients with chronic conditions, especially uncontrolled diabetes mellitus and immunocompromised patients such as hematologic malignancies [2]. It can appear as different clinical syndromes such as rhinocerebral, gastrointestinal, pulmonary, central nervous system; Rhinocerebral type is the most common and has a characteristic method of spread [3, 4]. Cranial nerve findings signify severe infection and signal a poor prognosis [3]. In the following section, we thoroughly report a case of mucormycosis, presented with cranial nerves palsy without obvious necrosis or significant involvement of paranasal sinuses.

A 50-year-old poorly controlled diabetic woman was admitted to the hospital of Gorgan 5 Azar of Iran with a history of blurred vision, left side facial palsy, facial skin hypoesthesia on the cheek, which had begun from 1 month ago, while she did not have any complaint of nasal obstruction symptoms and sinusitis. On admission, the patient had left side eye ptosis, blurred vision (hand motion), reduced sense of facial skin, and facial nerve palsy on the same side, without any movement of orbital muscles (frozen eye). Therefore, she had an abnormal function of multiple cranial nerves (II, III, IV, V, VI, VII). The computed tomography scan revealed mild mucosal thickening in the left side maxillary sinus (Figure 1), and the MRI of the brain and skull base did not show a tumor or significant pathology. Because of suspicious mucormycosis, the patient underwent endonasal endoscopy; on the left side of her nose, the mucosa of the nasal cavity and osteomeatal complex was edematous and inflamed like rhinosinusitis, but necrosis was not seen. Then a biopsy was taken from the mucosa of the nasal cavity and maxillary sinuses in the osteomeatal complex, and it was sent to a pathology laboratory. Pathology reports were mucormycosis with broad, non-septate hyphae with angioinvasion (Figure 2). Then the nasal cavity and sinus were completely debrided, orbital exenteration was done, and amphotericin B was started, and ultimately the patient survived. 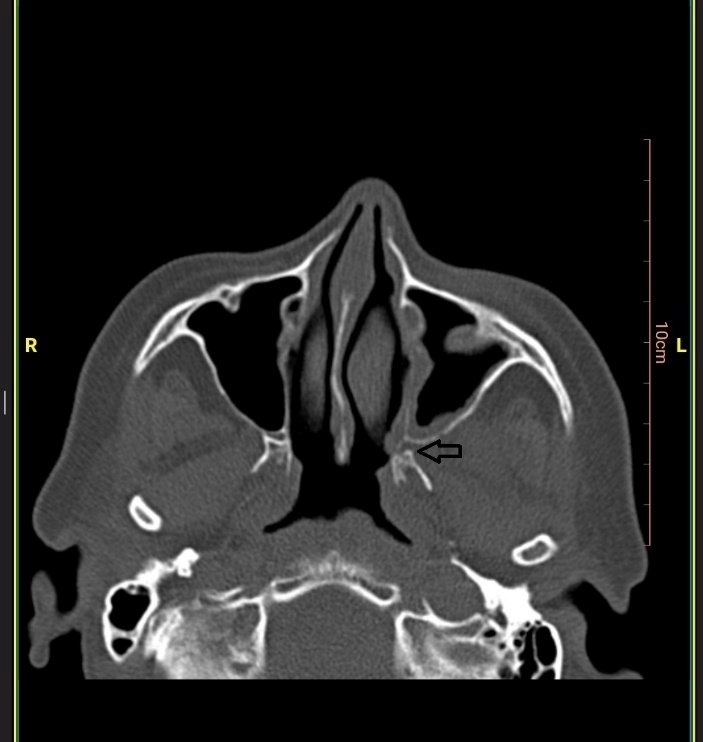 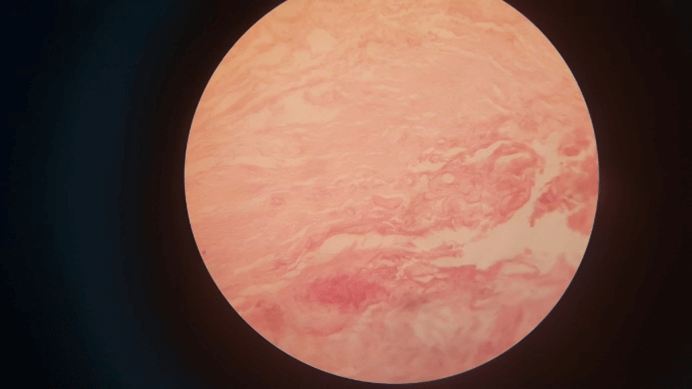 Figure 2: Mucormycosis with angioinvasion seem in the pathologic sample.

Mucormycosis is an opportunistic disease and highly invasive fungal infection that usually begins in the nose and paranasal sinuses [1]. It has two forms; i) Rhino-orbito cerebral form, which is a fatal variety, and ii) Rhino-paranasal sinuses form, which generally follows a benign clinical course [3, 5]. Patients with rhinocerebral mucormycosis are commonly manifest with black tissue and necrosis on the nasal mucosa or palates. The progression of the disease is either by direct spread or angioinvasion or hematogenous dissemination. Intracranial extension via perineural spread has also been documented [2, 4]. Angioinvasion by the hyphae gives rise to a fibrin reaction and the development of mucor thrombi, which clogs the arteries leading to ischaemia and infarction, consequently producing the black necrotic crusts [4]. In the present case, the patient's diagnosis of this distressing disease was delayed as a result of the absence of such characteristic symptoms [2]. We did not have any specific necrosis and significant necrosis. The cerebral form of mucormycosis is the most easily identiﬁed by ocular manifestations.

The pathway of spread is believed to initiate from the nasal mucosa, spreading to the ethmoid sinuses, finally orbit, and the intracranial fossa [3, 6]. Indeed, the pterygopalatine fossa is considered to be a way of mucor spreads to retro-global space of orbit and infratemporal space, possibly a way of extension to orbit and facial nerve in our patient [3]. Although isolated cranial nerve palsy is common in diabetic patients, multiple cranial neuropathies are rare, and if present, septic cavernous sinus thrombosis and diabetic polyneuropathy should be suspected [7]. Treatment of mucormycosis based on Amphotericin B and surgical debridement, pansinusectomy, orbital exenteration, and sometimes intracranial surgery is performed depending upon the extent of the disease [8]. Orbital exenteration, endoscopic sinus surgery, and long-term antifungal drugs were done for our patient; fortunately, the patient survived, but cranial nerve palsies did not improve.

In every diabetic patient with cranial nerve palsy and sinusitis, invasive mucormycosis must be considered. Our patient had mild sinusitis with an unusual way of spread to the orbit and cranial nerves.

Consent for publication was taken from the patient.

Availability of Data and Material

© 2021 Masoumeh Eslami. This is an open-access article distributed under the terms of the Creative Commons Attribution License, which permits unrestricted use, distribution, and reproduction in any medium, provided the original author and source are credited. Hosting by Science Repository. All rights reserved.
DOI: 10.31487/j.SCR.2021.08.14

Figure 2: Mucormycosis with angioinvasion seem in the pathologic sample.