Introduction: Liver injuries are frequent in abdominal trauma and may be managed using a variety of methods. The operative management of deep, penetrating wounds generally involves balloon tamponade of the wound tract using a Sengstaken-Blakemore catheter.
Case Presentation: A haemodynamically unstable 34-year-old male with multiple thoracoabdominal gunshot wounds was transferred to the operating theatre. At laparotomy, a grade 3 transfixing (through and through) bilobar hepatic wound was discovered with active hemorrhage. Unfortunately, no suitable balloon catheters were available, so, as an alternative, tamponade of the wound tract was successfully achieved using a tubular omental patch.
Discussion: Omental patches are commonly used in the management of perforated duodenal ulcers and have been used to prevent recurrence following hepatic cyst de-roofing. To the authors’ knowledge, this is the first description of this technique for the management of penetrating bilobar transfixing hepatic injury.
Conclusion: A tubular omental patch may be used to achieve tamponade of deep wounds in penetrating hepatic trauma. This could be a particularly useful technique in resource-poor environments, or where a suitable balloon catheter is otherwise unavailable.

Injuries continue to be an important cause of morbidity and mortality in the developed and developing world [1]. Liver injuries are frequent in abdominal trauma and may be managed using a variety of methods. In general, low-grade injuries in haemodynamically stable patients may be managed non-operatively or with radiological embolisation if localised and stable. Those patients with haemodynamic instability, often associated with high-grade injuries, is usually an indication for surgery [2].

Intra-operatively, the surgeon’s primary concern is to arrest hemorrhage. Damage control surgery is employed in a wide range of abdominal emergencies and is an increasingly recognized life-saving tactic in emergency surgery performed on physiologically deranged patients [1]. This is often achieved through packing of the liver. If hemorrhage remains uncontrolled, the subsequent techniques required are dependent on the nature and extent of the injuries present – for example, bleeding vessels may be ligated, or major venous injuries may be repaired, occasionally requiring full mobilisation of the liver and major vessel venous control. In extreme conditions this may warrant a thoracotomy for proximal IVC occlusion. Severe lesions in the liver are associated with a high mortality rate and penetrating hepatic injuries with active bleeding are extremely challenging even for the most experienced surgeons [3-5]. In penetrating wounds where hemorrhage is uncontrolled by initial packing, balloon tamponade of the wound tract is a widely accepted technique and was first described by Morimoto et al. in Sao Paulo, Brazil, in 1987 [6, 7].

The use of the Sengstaken-Blakemore balloon was described in the English literature in 2006 [8]. The catheter is inserted deep into the wound tract; the balloon is inflated, and once haemostasis has been achieved – the end of the catheter is brought out through the skin. It may then be left in-situ for several days before being deflated and removed [9-14]. However, such devices are not always available. Omental patches have been used for many years for liver rupture as describe by Stone, but there have been no reports of a Pedicled and Tubular Omental Patch (P-TOP) for the tamponade of a deep, penetrating transfixing (through and through) the hepatic wound [15]. We describe such a case here, which took place in an academic tertiary trauma center within an urban area of Brazil; it is reported in line with SCARE criteria [16].

A 34-year-old male with multiple thoracoabdominal gunshot wounds, respiratory distress, and reduced consciousness (GS 12) was transferred urgently to the trauma center of Trabalhador Hospital. He received bilateral thoracostomies and endotracheal intubation at the scene. On arrival, the patient remained hypotensive (BP 75/40) and tachycardic (HR 132), despite initial 2l IV saline administration, tachypnoeic (30), but oxygenating well (SpO2 100%, ventilated with high-flow oxygen). FAST scan was positive for intra-abdominal fluid. The patient was taken immediately to the theatre for urgent laparotomy. The trauma scores on admission were: Revised Trauma Score (RTS) 1.023; Injury Severity Score (ISS) 35; and Penetrating Abdominal Trauma Index (PATI) 39. The principal finding at laparotomy was hemoperitoneum associated with a transfixing (through and through) bilobar hepatic wound, which extended from a bullet entry point in segment III of the liver to an exit point in segment VII (grade 5 liver lesion) (Figure 1). Other findings included multiple injuries to the ileum and ascending colon.

Packing and compression of the liver was unsuccessful in controlling hemorrhage, although a Pringle’s manoeuvre provided some temporary control. Subsequent to this, typical management would involve balloon tamponade of the wound tract using an appropriate catheter. Unfortunately, a Sengstaken-Blakemore catheter was unavailable, due in part to an earlier mass casualty situation.

As an alternative, a P-TOP was fashioned. Initially, a flap of greater omentum supplied by the right-sided omental artery was dissected free from the remainder of the omentum. A standard Foley catheter was then inserted through the exit wound in segment VII of the liver, and the end of this catheter (emerging from the entry wound in segment III) was loosely sutured to the distal part of the omental flap (Figure 2). Traction on the catheter delivered the omental tube through the wound, the loose suture was removed, and adequate tamponade was attained. As a final step, the edges of the entry wound in segment 3 were closed using 0-catgut (Figure 3). The ileal and colonic injuries were repaired using 4/0 vicryl, and the patient’s lung injuries were managed conservatively.

Figure 2: The end of the catheter is loosely sutured to the distal part of the omental flap. 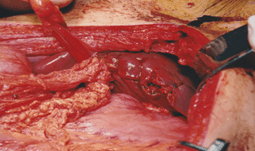 Figure 3: The omental patch has been delivered through the wound tract, and the open edge of segment III has been sutured.

Figure 4: Post-operative day 7. An area of necrosis has developed in the superficial part of segment III.

At re-exploration, the radiological findings were confirmed, with an area of necrosis evident in the superficial part of segment III of the liver (Figure 5). No other complications were evident. Notably, there was no evidence of abscess, bile leak, or hemorrhage. Necrosectomy was successfully performed, and subsequent recovery was uneventful. A CT scan of the abdomen and pelvis on post-operative day 13 was unremarkable, and the patient was discharged home on post-operative day 15. The patient was followed-up as an outpatient for a period of 6 months, and in that time, suffered from no further complications. 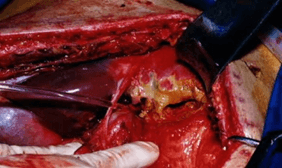 Figure 5: The area of necrosis is seen at the site of the large hepatic sutures used to close segment 3 (see Figure 3).

Omental patches are commonly used in the management of perforated duodenal ulcers and sometimes in hepatic surgery to prevent recurrence following cyst de-roofing, in liver lacerations and bleeding [17-21]. To the author’s knowledge, this is the first description of the tubular patch being used for the management of transfixing bilobar liver lesion. It is possible to divide grossly penetrating injury to the liver into three categories: hemodynamically stable; initially stable, and then deterioration; and those who present in shock, as in this case. The leading cause of death in liver injuries is exsanguinations, which require immediate attention. The decision for the operative management in liver trauma mainly depends on the hemodynamic status of the patient and from the concomitant internal organ injury as per the World Society of Emergency Surgery (WSES) recommendation on the management of liver injuries [6]. To stop active hemorrhage, exploratory laparotomy is the most feasible option in the majority of trauma centers around the world and is routine in our hospital. The initial results of surgery for liver trauma pre- World War II were very poor and discouraging, because there were no significant differences in mortality between surgery and non-operative management [20].

Since then, surgeons started to control hemorrhage from the liver by using the Pringle manoeuvre, cautery, and packing with various materials, such as gauze, muscles, and omentum. Lamb stated “the simplest method that will check hemorrhage is the best” [22]. In our patient, initial packing and 20 minutes clamping using the Pringle manoeuvre, as recommended in the literature, demonstrated effective haemostasis and gave time for the anaesthetist to catch up with blood loss [23-25]. The next step in our protocol would be to use the widely accepted balloon catheter technique, which works well to tamponade the internal surface of a penetrating wound tract [5, 7-14]. As our case was a deeper bilobar liver injury with a larger internal surface area, the use of a larger balloon (Sengstaken-Blakemore catheter) was indicated, but unfortunately unavailable. This resulted in the use of a P-TOP to tamponade the injury after digital exploration of the liver wound, and effectively arrest the bleeding. Not only is this technique straightforward and requires no specialist equipment, as no foreign body is left in-situ there is a reduced potential for intra-abdominal infection, and biloma formation.

Furthermore, such a technique reduces the requirement of opening the tract, with direct vessel ligation and subsequent debridement of necrotic tissue (Pachter's procedure), omental patch or graft is a classical technique in the surgical armamentarium, described for numerous situations from skull trauma to leg revascularization with ischaemic ulcers [9, 20, 26, 27]. The major technical detail of the P-TOP is the correct measurement of the wound tract to create an adequate omental plug. Where a communicating entry and exit wound exist – as is often found in gunshot wounds, for instance – a urinary catheter may be used to introduce the patch, as described above. The novelty of this case is the use of a pedicled graft pulled through the bilobar tract using a catheter. Another learning point from this technique relates to appropriate trimming of the omentum according to the size of the tract and maintain the blood supply while still compressing the tract to stop bleeding and prevent subsequent bile leak. The patient described above suffered from one major complication (Clavien-Dindo IIIb): an area of necrosis in the superficial part of segment III. It is the authors’ opinion that this complication was secondary to devitalisation by the gunshot wound as well as the large sutures used to close the area during the primary operation (as demonstrated by comparing the location of the necrosis and the location of the sutures, (see Figures 3 & 5), rather than being a consequence of the patch itself.

Notwithstanding the fact of the segment 3 necrosis, the omental patch was viable in the second operation, and no abscess formation was found. Some authors advocate the routine debridement of suspect devitalized tissue or liver resection, at the first operation [20]. Finally, it may be considered a disadvantage of the P-TOP that it is unable to create the high pressure achieved with the balloon catheter technique. However, the advantages of using the omentum relate to its central role in peritoneal defence by adhering to sites of inflammation, absorbing bacteria and other contaminants, providing leukocytes for a local immune response and neovascularisation due to its angiogenic activity in adjacent structures to which it is applied [28].

A Pedicled and Tubular Omental Patch (P-TOP) may be used to achieve tamponade of deep wounds in penetrating hepatic trauma. The technique is straightforward and requires no specialist equipment. It may be able to avoid further complications associated with the balloon technique but requires prospective audit.

Consent for the presentation and publication of this case history, including intra-operative images, was obtained from the patient concerned.

© 2021 Artur Zanellato. This is an open-access article distributed under the terms of the Creative Commons Attribution License, which permits unrestricted use, distribution, and reproduction in any medium, provided the original author and source are credited. Hosting by Science Repository. All rights reserved.
DOI: 10.31487/j.SCR.2021.01.13

Figure 2: The end of the catheter is loosely sutured to the distal part of the omental flap.

Figure 3: The omental patch has been delivered through the wound tract, and the open edge of segment III has been sutured.

Figure 4: Post-operative day 7. An area of necrosis has developed in the superficial part of segment III.

Figure 5: The area of necrosis is seen at the site of the large hepatic sutures used to close segment 3 (see Figure 3).