Because the concordance rate between identical twins is only 88%, an environmental factor must cause autism spectrum disorder (ASD). Furthermore, when identical twins share ASD, it is to varying degrees suggesting different prenatal environments exist, which occurs when identical twins have separate placentas (~30% of the time). Placental inclusions are predictive of ASD along with excessive increases in extra-axial cerebral spinal fluid (CSF) detected by MRI in the brains of 6- and 12-month-old infants later diagnosed at 2 years with ASD. The human papillomavirus (HPV) can infect the trophoblast cells of placentas and transmit to the fetus where it infects the epithelial cells of the choroid plexus, a centrally located lining inside the brain responsible for producing CSF via the SLC4A10 gene product. HPV causes epigenetic changes, deletions, and duplications of genes, and besides its characteristic methylation patterns, the SLC4A10 gene was found to be increased in children with ASD. Moreover, male placentas implant close to the cervix (low-lying) three times more often than female placentas paralleling the ASD ratio of ~3:1 (boys to girls). Finally, the Australian HPV vaccination programme that began in 2007 might explain why the 0-4 yr. ASD incidence did not increase from 2010 to 2015.

Autism spectrum disorder (ASD) encompasses a wide range of neurological developmental conditions usually characterized by insufficiencies in social interactions and communication abilities. Everything from genetics (including epigenetic changes, copy number variants, somatic mutations, and polymorphisms) to environmental exposures (including low vitamin D levels, vaccinations, chemicals, medications, drugs, and cytokines) and combinations of both have been frantically investigated in a desperate attempt to stop the alarming rate increase. The alarming rate increase was blamed on enhanced public awareness and changes in diagnostic criteria, but the rate of increase in the ASD incidences around the world over the past few decades were shown to be real by the CHARGE study [1, 2]. The rate varies in developed countries around the world from 1 in 27 in Hong Kong to 1 in 3,333 in Poland, and in the United States (U.S.) it may have been as high as 1 in 45 in 2017 [3, 4]. ASD is pandemic and thought to be genetic in origin, but because it increased at exponential rates in all races around the world in recent decades suggests it is primarily due to an environmental factor like a contagious disease.

I Environment Versus Genetics 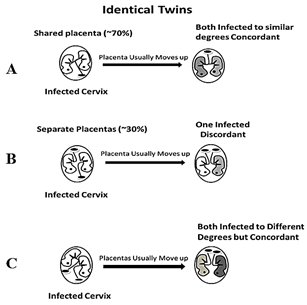 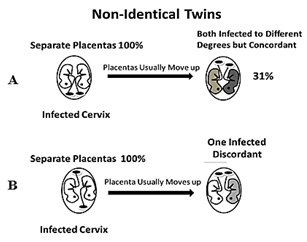 Figure 2: Non-identical twins never share a placenta so they only have two scenarios: A) Both placentas are low in the uterus and can be infected to different degrees – concordant (31%), and B) only one placenta is low in the uterus – discordant.

The most prevalent pandemic cervical infection is the human papillomavirus (HPV) [19]. The exponential increase in the incidence of HPV+ oropharyngeal cancers in the U.S. (Figure 3A) parallels the exponential increase in ASD in the U.S. (Figure 3B) during the same time frame, and in Europe (Sweden) the HPV+ oropharyngeal cancers (Figure 4A) also parallel the exponential increase in ASD (Figure 4B) [20, 21]. Clinicians find HPV in the trophoblast cells of placentas that can transmit HPV to the fetus [13, 14, 22, 23]. Trophoblast inclusions are predictive of ASD and placental abnormalities and preterm births are major risk factors for ASD [24, 25]. Unfortunately, clinicians have not yet tested for HPV in the trophoblast cells with inclusions, but HPV is known to cause placental abnormalities, preterm births, low birth weights, and spontaneous abortions [26, 27]. The severity of ASD symptoms might depend on the viral load due to the location of the placenta, i.e., how close the placenta embeds near the contaminated cervix, the timing of infection (first trimester or longer), the strain(s) of HPV (e.g., -6, -16, -52, -90, etc.), or some or all of those factors combined which might explain why a broad spectrum of autistic symptoms exists. 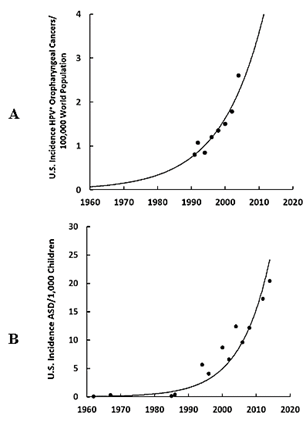 The prevalence of HPV infection varies by the mother’s age, continent, and region [28]. Older women have a much lower HPV prevalence than younger women of child-bearing age. The continent of Africa (21.1%) had the highest HPV prevalence followed by Europe (14.2%), and North and South America (11.5%; including the regions of Canada, U.S., Greenland, Central and South Americas, and the Caribbean islands), and Asia (9.4%); while Australia was excluded because they have an ongoing HPV vaccination programme. The order of HPV prevalence is Africa (21.1%)> Europe (14.2%) > Americas (11.5%) [N. America (4.7%)] >Asia (9.4%). 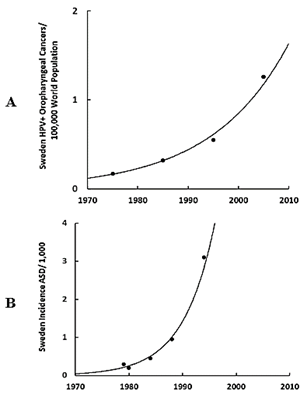 III Can HPV Infect the Brain?

HPV was found in neurons and in the post-mortem brains of children who had focal cortical dysplasia type IIB (epilepsy and seizures), which is also sometimes associated with ASD [33-36]. Of the five HPV genera (alpha, beta, gamma, mu, and nu), two genera (beta and gamma) can infect epithelial cells [37]. The choroid plexus, which is a centrally located lining inside the brain that produces cerebral spinal fluid (CSF), is comprised of epithelial cells that have the sodium-driven chloride bicarbonate exchanger, SLC4A10 gene product, required for CSF production [38, 39]. CSF is secreted when SCL4A10 unidirectionally transports sodium, chlorine, and bicarbonate from the blood to the ventricles of the brain. SLC4A10 disruption enhances neuronal excitability, modifies synaptic short-term plasticity, and is sometimes associated with complex partial epilepsy and mental retardation [40, 41]. Most importantly, increases in extra-axial CSF at 6 and 12 months of age observed in brain ventricles by MRI were predictive of infants who developed ASD at 2 yrs. of age, and increasing amounts of CSF correlated with increasing severity of ASD symptoms [42]. An increased copy number of the SLC4A10 gene is associated with ASD and integration of HPV into the genome results in duplications and deletions of genes [43, 44]. More scientific evidence that HPV causes problems in the brain is obtained from the papillomas and tumors of the choroid plexus found in children younger than 2 [45, 46]. The E6 and E7 oncogene proteins of HPV caused tumors in the choroid plexus of transgenic mice [38]. Further, neuroinflammation is a hallmark of ASD and can be caused by activation of the neuroglial cells that remove infections in the brain [47, 48]. Moreover, the gut is similar to the choroid plexus, having similar immune functions and a single layer of epithelial cells that HPV can infect [49]. In fact, 75% of ASD children have gastrointestinal diseases like inflammatory bowel disease [50].

Because HPV is involved in cancer, we would expect to find biochemical similarities between ASD and cancer, and indeed they exist (see Table 1 for the following discussion) [51-53]. Both ASD and cancer have disruptions in the PI3K-Akt-mTOR signaling pathway; mTOR serine/threonine kinase mediates signaling pathways required for glial and neuronal differentiation in brain development. mTORC1 signaling is disrupted in ASD and occurs in pediatric brain tumors, seizures, learning disabilities, and mental retardation [54]. mTOR signaling is activated through PTEN in children with ASD and the E6 protein of HPV activates mTORC1 signaling [55, 56]. Clinicians use Rapamycin, which inhibits the mTORC1 pathway, to treat both ASD and cancer [57-59]. More biochemical evidence is obtained from the UBE3A gene that encodes the ubiquitin E3 ligase, E6-A, which degrades p53 (the Guardian of the Genome) and is associated with both ASD and HPV [60, 61].

Table 1: Endpoints in common between HPV and ASD.

UBE3A is another consistently duplicated gene in ASD besides SLC4A10 [62]. Further evidence HPV probably causes ASD is obtained from significantly higher incidences of cancer in the ASD population [63, 64]. Moreover, preeclampsia (high blood pressure) in associated with pregnant women who had an ASD child and an almost 2-fold increase in the risk for developing preeclampsia exists for mothers with HPV infection [65, 66]. Finally, ASD children all had lower vitamin D3 levels, which were only lower in the discordant identical twin who had ASD even though both twins had similar diets and sun exposures [67]. HPV may decrease vitamin D levels by increasing the production of the enzyme alpha-N-acetylgalactosaminidase that was found to be elevated in ASD children [68]. Alpha-N-acetylgalactosaminidase cleaves the sugar moiety from the vitamin D binding protein so that it can no longer bind to and transport vitamin D into the bloodstream. Another detrimental effect of cleaving off the sugar moiety is losing enzymatic conversion to the macrophage-activating factor, which results in suppression of the innate immune response. Vitamin D is also required for T-cell activation and antigen receptor signaling, so that low levels suppress the adaptive immune response as well [69]. Increasing that enzyme, results in suppression of both the innate and adaptive immune responses allowing HPV to escape immune surveillance.

Epigenetic events like DNA methylation of promoters, duplications and deletions of genes, and point mutations can make ASD appear to be genetic disguising the environmental factor involved. Decreases or increases in the production of gene products occurs when promotors are either hypomethylated or hypermethylated. An abnormal DNA methylation pattern is only found in the identical twin with ASD - not in the discordant twin– and an abnormal DNA methylation pattern is also found in cervical cancer and only in HPV positive not negative oropharyngeal cancers [70-72]. Over 190 sites in the host genome can allow HPV integration that results in duplications and deletions of genes resulting in genomic instability observed in cervical cancers and in ASD [73-75]. Some point mutations found in ASD might be from deamination of methylated cytosines in CpHpG sites (where H = A, C or T) [76].

Another potential genetic indicator was thought to be the higher occurrence of ASD between siblings, but over half the infected women could not clear HPV for 2 years so that another pregnancy during that time could also yield a child with ASD [77]. One year between pregnancies was found to be three times riskier than 3 years between pregnancies for having a second child with ASD [78]. If ASD had a genetic origin, the time between sibling births would not matter. In addition to short spacing times between sibling births (<2 yrs.), long spacing times (>6 yrs.) also increased the risk for having a child with ASD; however, that could be due either to reinfection or to the mother becoming immunosuppressed and HPV becoming reactivated [79, 80]. Vitamin D3 deficiency (and insufficiency) is one way to cause immunosuppression and reactivate HPV [81]. Additionally, gestational vitamin D deficiency and neonatal or combined maternal and neonatal insufficient levels of vitamin D also represent an increased risk for ASD [7, 82].

The best strategy to prevent ASD is for people, especially women, to get HPV vaccinated (3 shots) prior to and even during pregnancy, which was found to be safe, because the mother can supply passive immunity to the neonate and infant [83]. Australia began a free school HPV vaccination programme (quadrivalent HPV-6, -11, -16, -18) for 12-13 yr. girls in 2007 that was extended to boys in 2013. Vaccinated 12–13-year-old girls in 2007 were of child-bearing age in 2015 (20-21 yr.) and some had children 4 yrs. old or younger and an Australian study found no increase in the incidence of ASD from 2010 to 2015 for the 0-4 yr. age group [18]. Besides HPV vaccination, people and children should also increase their vitamin D3 to sufficient blood levels (≥50 nmol/L) to boost their innate and adaptive immune responses and improve their brain health [84].

The findings and conclusions in this paper have not been formally disseminated by the Food and Drug Administration and should not be construed to represent any agency determination or policy. The mention of commercial products, their sources, or their use in connection with material reported herein is not to be construed as either an actual or implied endorsement of such products by Department of Health and Human Services.

© 2021 Dianne E. Godar. This is an open-access article distributed under the terms of the Creative Commons Attribution License, which permits unrestricted use, distribution, and reproduction in any medium, provided the original author and source are credited. Hosting by Science Repository.
DOI: 10.31487/j.NNB.2021.04.02

Table 1: Endpoints in common between HPV and ASD.

Figure 2: Non-identical twins never share a placenta so they only have two scenarios: A) Both placentas are low in the uterus and can be infected to different degrees – concordant (31%), and B) only one placenta is low in the uterus – discordant.