A 56-year-old female was diagnosed with Evans syndrome and was on a high dose of prednisolone for 4 years. At this visit, she presented with a cough and had had dyspnea for 3 weeks. Her chest X-ray showed a heterogeneous wedge-shaped opacity, at the right middle lung field, with a size of about 4.1x7.1 cm (Figure 1A) with adjacent pleural thickening. She was diagnosed with pneumonia, then partially treated with antibiotics but did not recover at the local hospital. She was taken to Songklanagarind Hospital, where her sputum was revaluation with direct gram smear and modified Kinyoun acid-fast stain. The slide showed filamentous branching-beads like an organism coupled with irregular staining that was compatible with pulmonary nocardiosis. The patient was started on intravenous Bactrim (15mg/kg/day of trimethoprim-sulfamethoxazole (TMP-SMX)).

An MRI of the spine showed a few rim enhanced lesions within the deep subcutaneous tissue of both sides of the back, about 1-3 cm wide, which indicated likely evidence of her known, underlying disseminated nocardiasis. Deeper extension, to involve the left paravertebral soft tissue, transverse process and epidural extension compressing upon the spinal cord within a narrow central spinal canal at T5 level were noted. Additionally, Superior extension involving the spinal canal at T4, down to T7 level are also detected. Mild to moderate degree narrowing of the central spinal canal at C4 down to C7 levels was also seen, whilst the conus medullaris at the T12 level appeared unremarkable. Consolidation pneumonia of partly seen RML and RLL, with multiple scatter infiltrations, in the rest of both lungs were also most likely due to disseminated nocardiasis. A small amount of bilateral pleural effusions was seen. The MRI was disseminated in nocardiasis, involving the lungs, subcutaneous tissue with left paraspinal and epidural extension, resulting in spinal cord compression from T4-T7 (Figure 2). 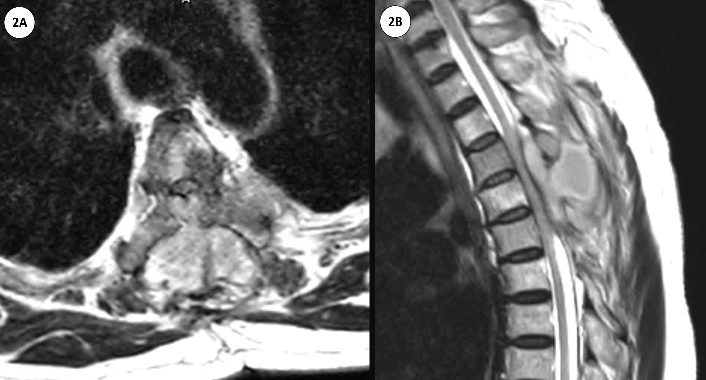 The patient was put under general anaesthesia in the prone position, wherein, the authors then performed a posterior approach to the upper thoracic area. Posterior decompression, debridement and laminectomy on T4 to T7 was then performed. The surgeon found 20 ml of pus from the epidural area, so both tissue and pus samples were sent for culture diagnosis. Direct Gram smear and modified Kinyoun acid-fast staining revealed numerous branching filamentous bacillus. The culture pus and tissue specimens intraoperative reported "Nocardia brasiliensis". For this, the patient was continuously treated by intravenous Bactrim, for a total of 2 weeks, then continued oral Bactrim for 12 months. The patient’s neurological status significantly improved at a 12-month follow-up.

Nocardia brasiliensis is an aerobic actinomycetes, and it is an acid-fast positive, branching filamentous bacillus. Although commonly found in water, soil, and decaying organic matter, Nocardia spp. are not common in immunocompromised patients [5]. Nocardia infections in immunocompromised patients enables the involvement of the pulmonary parenchyma, the skin and subsequent development of brain abscesses, epidural abscess and vertebral osteomyelitis [3, 6]. Nocardia is a slow-growing organism, which takes 5-21 days to exhibit growth; therefore, it is important not to discard the cultures early if nocardiosis is suspected [3]. Evans syndrome is an autoimmune disease, in which simultaneous or sequential direct Coombs-positive autoimmune hemolytic anemia (AIHA) in conjunction with immune-mediated thrombocytopenia can occur, with no known underlying etiology [7]. Patients also receive high steroid doses to combat Evans syndrome, making for an immunocompromised host, so the infectious agent was subacute process with fungal and bacterial infection.

The immunocompromised host may have had a mixed infection, so the empiric antibiotic was useful. The other differential diagnosis is malignancy; therefore, chest and spine imaging should be performed. The lab should also investigate a septic workup for bacterial and fungus. The time of starting an empiric antibiotic to cover nosocomial infections and to deescalate is very important. Biopsy of soft tissue for pathological diagnosis and an MRI of the spine to evaluate cord lesions is the standard protocol, with the standard treatment for vertebral osteomyelitis and epidural abscess being surgical posterior decompression and debridement for elucidating the source of infection. The treatment of choice for the infection is most commonly Bactrim (trimethoprim-sulfamethoxazole (TMP-SMX)) [8]. The recommendation of TMP-SMX, with higher daily doses, can also be considered: 15 mg/kg TMP and 75 mg/kg SMX. After 3-6 weeks, the dosage can be reduced and switched to the oral form [9]. In previous reviews, prolonged antibiotic administration for immunocompromised patients is preferred for up to 12 months [1-9]. Nocardia brasiliensis osteomyelitis and epidural abscess are very challenging in their management and require early investigation for diagnosis, followed by medical and surgical treatment for a successful outcome.

The patient provided written informed consent to share his case details, and any accompanying images published. Prince of Songkla University Institutional Review Board (IRB number REC 63-176-11-4), Faculty of Medicine, Songklanagarind Hospital and Prince of Songkla University provided its approval to publish the case details. The patient’s personal information remains confidential. There was no cost, payment made or harm to the patient as a result of this study.

Written informed consent was obtained from the patient for publication of this case report, and the accompanying images.

The author has read and approved the manuscript and accepts full responsibility for the work.

The authors wish to thank Andrew Jonathan Tait, from the International Affairs Department of Prince of Songkla University, for his assistance in proofreading the English of this report.

© 2019 Wongthawat Liawrungrueang. This is an open-access article distributed under the terms of the Creative Commons Attribution License, which permits unrestricted use, distribution, and reproduction in any medium, provided the original author and source are credited. Hosting by Science Repository. All rights reserved.
DOI: 10.31487/j.AJSCR.2020.03.02