Nasolabial Flaps in the Treatment of MRONJ

Medication-related osteonecrosis of the jaw (MRONJ) occurs as a side effect of several drug classes, including antiresorptives and antiangiogenics. Its treatment may be approached in a number of different ways. The report below outlines a notable surgical case wherein sequestrectomy (with the aid of fluorescence and a Visually Enhanced Lesion Scope) was paired with concurrent reconstruction using a nasolabial fold flap to cover a large osteonecrosis lesion.

Osteonecrosis of the Jaw is defined as “exposed bone or bone that can be probed through an intraoral or extraoral fistula in the maxillofacial region that has persisted for longer than 8 weeks”. It is a rare side effect of several medications that alter bone physiology. There are numerous treatment options for MRONJ, both conservative and surgical [1]. One method for reconstruction of a large defect resulting from sequestrectomy, is the placement of a nasolabial fold (NLF) flap.

11 days prior to their operation, the patient begins a course of Doxycycline (a broad-spectrum antibiotic), which also functions as a fluorescent marker, causing vital well-perfused osseous structures to glow brightly under UV light, while there is loss of fluorescence in necrotic bone. This enables intraoperative use of a Visually Enhanced Lesion Scope or VELscope® (a device that enables enhanced visualization of defects through the use of UV light) [2]. This report is of a highly infiltrative case of MRONJ surgically treated with a nasolabial flap.

A 46-year-old female with a history of breast cancer presented to our department with pain (VAS 3/10) and a non-healing tooth extraction site. The patient had been diagnosed with breast cancer in 1981, for which she had left breast ablation and is currently on aromatase inhibitors. She suffered skeletal metastases to her left 5th rib, as well as to her sacrum, for which she is on X-geva (Denosumab). CT revealed a sclerotic defect in the site of her upper left 3rd molar following extraction (Figure 1). There were also ventral cortical defects in the extraction sites of her upper left central incisor, lateral incisor and canine, with atrophy of her alveolar ridge. A small lesion was also present in her left mandibular condyle. 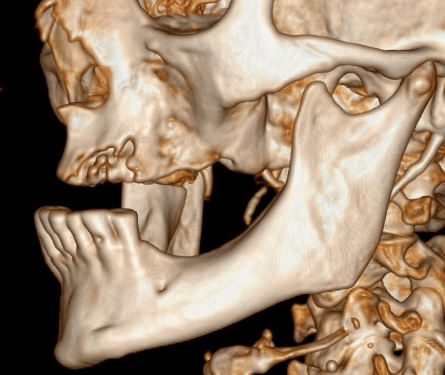 Her entire left maxillary sinus was filled with pathological contents, which was expanding into her nasal cavity, destroying the medial walls of her antrum and the middle nasal concha. The ostiomeatal complex on the left was obstructed, and the pathological contents penetrated through to her ethmoids on her right. 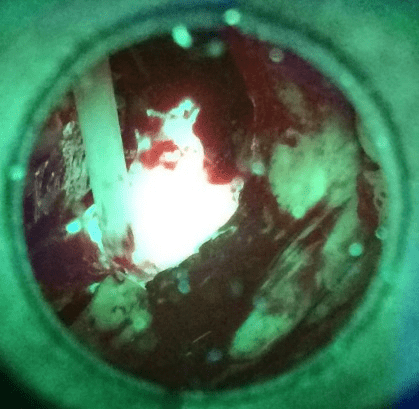 Figure 2: Fluorescence of vital bone tissue seen through the VELscop.

Sequestrectomy was performed affecting her whole upper left quadrant, with exploration of her left maxillary sinus (some polyps were collected for histology; subsequently found to be benign). A VELscope® was used to ensure that all necrotic bone had been removed (Figure 2). Hydrogen peroxide and Betadine were used to clean the wound and subsequently a cranially based nasolabial flap on the left was mobilized, decorticated and rotated into the nasal cavity to cover the defect. The flap was sutured into place using layered Safil 4/0 and Dafilon 4/0. A nasogastric tube was inserted.

Nasolabial flaps are myocutaneous flaps with a rich blood supply derived from branches of the facial artery. They have sufficient bulk (provided by facial musculature) to make them well-suited for single-stage reconstruction of large oral cavity defects, such as after radical sequestrectomy [3]. It is a relatively quick procedure (average operating time, excluding the sequestrectomy itself but including flap harvesting, placement and harvest site closure, is 1h 23 minutes); provides us with adequate viable tissue; and does not cause significant aesthetic facial disfigurement. It is possible to use it for defects in both the upper and lower jaw, utilizing either a pedicle or (free) random vascularisation flap. It is of the utmost importance, however, to ensure complete removal of all necrotic bone – confirmed by the use of a VELscope®.

Thus far we have operated on 7 patients using this technique. We have used it 6 times in the upper jaw, and once in the lower jaw. The random flap variant was used in all 7 cases (i.e. the pedicle variant was used 0 times). Successful healing occurred in all 7 cases. 2 cases developed a small dehiscence after the procedure, which was repaired with a soft tissue closure.

The results are not only aesthetically pleasing but they also greatly aid the prosthetic rehabilitation of the patient.

© 2019 Anna Onderková. This is an open-access article distributed under the terms of the Creative Commons Attribution License, which permits unrestricted use, distribution, and reproduction in any medium, provided the original author and source are credited. Hosting by Science Repository. All rights reserved.
DOI: 10.31487/j.SCR.2019.05.08

Figure 2: Fluorescence of vital bone tissue seen through the VELscop.