Management of a Donor Supernumerary Kidney During Renal Transplantation: A Case Report

Introduction: A fused hilar supernumerary kidney was discovered in a donor organ upon reperfusion during renal transplantation. There is a paucity of literature regarding this anomaly and its management in renal transplant recipients.
Case Presentation: Back table preparation of a right deceased donor kidney revealed a duplicated renal artery and ureter. Complex reconstruction of the vasculature was performed avoiding extensive hilar dissection. Following anastomosis of the renal vasculature to the recipient’s iliac vessels, reperfusion revealed a suspicious lower pole renal mass. Frozen section biopsies of the mass were consistent with normal renal parenchyma. Urology was consulted intraoperatively and confirmed the mass to be a small accessory kidney with a separate collecting system, thin parenchyma and hydroureteronephrosis. A nephrectomy of the supernumerary kidney was performed.
Discussion: Supernumerary kidneys are extremely rare and infrequently encountered by transplant surgeons. They are usually asymptomatic and incidentally discovered on imaging. If discovered intraoperatively careful inspection must be performed to evaluate for stigmata of potential complications.
Conclusion: Knowledge of this entity is important to provide crucial intraoperative decision making and management if encountered in a donor organ. Careful evaluation of these anomalies must be performed when considering resection in order to avoid later complications, with caution that resection may compromise renal function.

A supernumerary kidney refers to the presence of an accessory organ, with the total number of kidney’s exceeding two [1]. Not to be confused with a duplex kidney, the supernumerary kidney usually consists of a separate encapsulated parenchyma along with its own collecting system and vascular supply [1, 2]. Conversely, a duplex kidney has a single continuous capsule with both poles firmly attached and shared vasculature [1].

The supernumerary kidney is an extremely rare anomaly of the urogenital system with fewer than 100 cases reported in the literature [1, 2]. Embryologically it is a result of the abnormal division of the nephrogenic cord into two metanephric blastemas forming two separate kidneys with partially or completely duplicated ureteral buds [1]. In relation to the normal kidney, the supernumerary kidney is usually located caudally when a bifid ureter is present, and cranially when separate ureters are present [3].

The clinical presentation ranges from asymptomatic to organ dysfunction. Management typically depends on patient symptoms, organ function, and the presence of disease, with nephrectomy a common treatment approach [1, 4]. When asymptomatic, its presence may be unknown posing a significant dilemma in a potential kidney donor. We present a unique case of a supernumerary kidney discovered in a donor organ upon reperfusion during renal transplantation. Given the paucity of literature regarding this anomaly we discuss our operative approach and management.

A 68-year-old Caucasian male with end-stage renal disease presented for a deceased donor kidney transplantation after a negative crossmatch was confirmed. The deceased donor, a healthy 35-year-old victim of trauma, had a history of Hepatitis C, with no other comorbidities, and a normal creatinine and glomerular filtration rate (GFR). Back table preparation of the right donor kidney revealed duplicated renal vasculature and ureters. Avoiding extensive hilar dissection, complex vascular reconstruction was performed including lengthening the renal vein by tubularization of the vena cava and performing an end-to-side anastomosis of the lower pole artery to the main renal artery. Duplicate ureters were noted with a plan to perform double ureteral anastomoses to the bladder.

After retroperitoneal access to the recipient’s external iliac vessels, the donor kidney was inset with venous and arterial end-to-side anastomoses performed. Shortly after reperfusion, a mass was noted, not previously observed during the back-table preparation. The mass, measuring approximately 4 cm, was located within the hilum, near the lower pole of the kidney. Due to the concern for an underlying pathology, two core needle biopsies were taken of the perceived mass. Pathologic frozen section analysis revealed renal parenchymal tissue with normal appearing glomeruli and renal tubules with no neoplasm identified. Next, a 1 cm wedge biopsy of the mass was taken with pathologic frozen section analysis again revealing normal renal parenchymal tissue.

At this point an intraoperative consult to urology was placed for opinion and management. Further dissection of the hilum was performed revealing the mass to be an accessory kidney partially fused to the dominant kidney with its own collecting system and ureter (Figure 1). Close inspection displayed hydroureteronephrosis of the supernumerary kidney indicative of long-term obstruction. To confirm a separate and patent collecting system, a 5-French open-ended catheter was inserted over a guidewire in a retrograde fashion through the accessory ureter up to the level of the renal pelvis. Saline was injected in a retrograde fashion, distending the renal pelvis, with evidence of severe hydroureteronephrosis and a thin renal parenchyma. 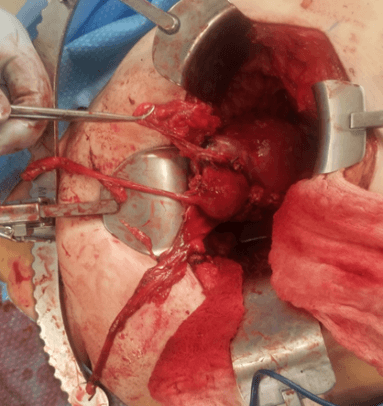 Figure 1: A supernumerary kidney partially fused to a dominant right donor kidney noted after organ reperfusion. The accessory kidney is noted to have its own ureter.

Also, poor outflow was noted from this accessory ureter. The decision was made to perform a nephrectomy of this accessory kidney as it was likely nonfunctioning and concern for future symptomatology in the recipient. The resection was performed with cautery and sharp dissection (Figure 2). We were able to identify a fibrous plane between the two kidneys. During resection, the renal artery and vein to the accessory kidney were encountered, dissected and ligated off the main renal vessels. The remainder of the transplant operation was performed without incident. Intraoperative ultrasound revealed adequate resistive indices and urine production was observed. 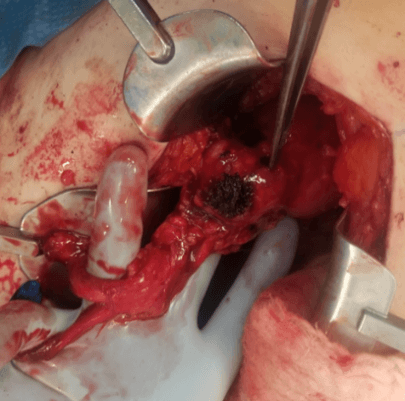 Figure 2: Post resection of the supernumerary kidney, showing the cauterized edge (blackened) of the main organ.

It is not uncommon to encounter significant anatomical variations during back-table preparation of a deceased donor organ. Additional renal arteries are found in around 30% of transplanted kidneys, with additional ureters less common at a reported 1% [5]. If present, careful inspection of the entire organ must be performed as to not miss less common etiologies. As this supernumerary organ was within the hilum, this was initially missed as the transplant surgeon typically does not dissect deep into the hilum. Given the rare nature of the supernumerary kidney, this entity was not initially high on the differential diagnosis when the renal “mass” became apparent. Additionally, accessory kidneys typically occur in conjunction with the left kidney and are found cranially if a separate ureter is present, making our presentation even more rare [3, 6].

Upon discovery of the donor renal mass, the first diagnostic step taken was to perform biopsies for immediate pathologic frozen section analysis. It is essential to rule out a potential malignancy and other renal disorders [7]. After confirmation of normal parenchymal tissue, careful hilar dissection was performed revealing a separate renal artery supplying the accessory kidney with a separate ureter attached. Saline injected in a retrograde fashion in the accessory ureter confirmed its connection to the accessory organ. The postoperative pathologic report confirmed an encapsulated kidney. Supernumerary kidneys either present as separate structures or, as in our case, fused to the primary kidney with loose areolar connective tissue [3, 8].

The anomaly had not been identified during procurement, and the donor reporting sheet reported only an additional renal artery. This is not surprising as the supernumerary kidney is often asymptomatic, only being discovered incidentally on imaging [1, 6, 9, 10]. If symptoms do occur, they may result from complications due to ectopic drainage, urinary stasis, infection, hydronephrosis, pyelonephritis, calculi, malignancy, and other associated conditions [1]. Intraoperative findings revealed evidence of severe hydroureteronephrosis, and later pathological analysis reported chronic ureteritis. Additionally, urine production was noted from the dominant kidney with no drainage from the accessory ureter. Due to concern for disease and a nonfunctioning accessory organ with the potential to cause later complications in the recipient, the decision to proceed with a nephrectomy of the supernumerary kidney was made.

There remains limited literature regarding the presence of a supernumerary kidney with no reports of its discovering in a donor organ during renal transplantation. This entity requires special consideration if discovered by the transplant team. Careful evaluation of these anomalies must be performed when considering resection in order to avoid later complications, with caution that resection may compromise renal function.

© 2021 Anil S. Paramesh. This is an open-access article distributed under the terms of the Creative Commons Attribution License, which permits unrestricted use, distribution, and reproduction in any medium, provided the original author and source are credited. Hosting by Science Repository. All rights reserved.
DOI: 10.31487/j.TCR.2020.01.05

Figure 1: A supernumerary kidney partially fused to a dominant right donor kidney noted after organ reperfusion. The accessory kidney is noted to have its own ureter.

Figure 2: Post resection of the supernumerary kidney, showing the cauterized edge (blackened) of the main organ.