Malignant Mesothelioma of the Epididymis: A Case Report of a Rare Paratesticular Neoplasm and Literature Review

Background: Malignant mesothelioma of the epididymis is an extremely rare neoplasm with a poor prognosis and high potential of recurrence.

Case Presentation: We report a case of a 28-year-old male with a left painless epididymal nodule. Scrotal ultrasound revealed a nodular mass with mixed echogenicity and Doppler showed increased vascularity. Radical orchidectomy was performed. Histopathological examination concluded to a malignant mesothelioma involving the epididymis. Metastatic workup was negative. The patient has undergone a regular follow-up and has been disease-free within 6 months.
Conclusion: Malignant mesothelium of the epididymis is a diagnosis challenge. Surgery remains the main treatment. A multidisciplinary management should be offered in those cases.

The term mesothelioma is given to tumor which arises from the lining cells of the serous membranes of the various body cavities such as pleura, peritoneum, tunica vaginalis. Mesothelioma of epididymis testis represents a very rare neoplasm and a diagnosis challenge. Pathogenesis of this malignancy remains unclear. Most of the cases are related to occupational exposure to asbestos [1]. We report a case of a 28-year-old male with an epididymal malignant mesothelioma.

A 28-year-old male, who denied asbestos exposure and smoking history, was referred to our department for painless left scrotal mass since 2 years that had not been gradually increasing. Our patient was admitted since his first assessment and underwent a diagnostic protocol for testicular cancer.

Physical examination revealed a small, firm, painless spherical mass about one centimeter in diameter located in the globus major of the epididymis, without any evidence of involvement of the scrotal skin. There was no hydrocele and no lymphadenopathy. Scrotal ultrasound revealed a nodular mass depending on epididymis with mixed echogenicity and Doppler showed increased vascularity (Figure 1). Extensive preoperative CT-scan staging was performed with no evidence of local lymphadenopathy neither distant metastasis. Blood tests showed normal levels of tumor markers (LDH, AFP, HCG).

During the surgical procedure, the epididymis was exposed through an inguinal incision; the tunica vaginalis was normal and did not contain any excess fluid. The tumor was of the size described above, encapsulated in the globus major of the epididymis, while the rest of the epididymis and testis were macroscopically normal. Left radical orchiectomy was performed. Convalescence was normal. The patient was discharged from hospital one day after the procedure and has remained entirely fit. Microscopic examination of the surgical specimen showed a trabecular cell proliferation in contact witch testis parenchyma and infiltrating rete testis (Figures 2 & 3). Tumor cells were strongly positive for calretinin (Figure 4). The patient didn’t undergo adjuvant chemotherapy and he remained under surveillance with no evidence of progression at last follow-up, with a progression-free survival of six months to date. 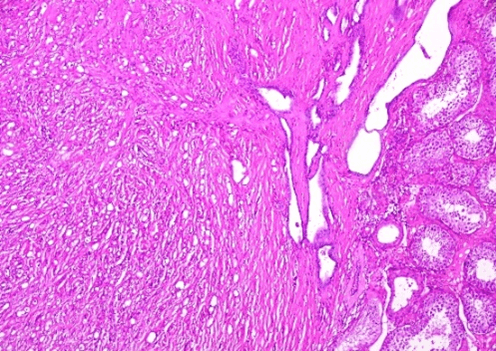 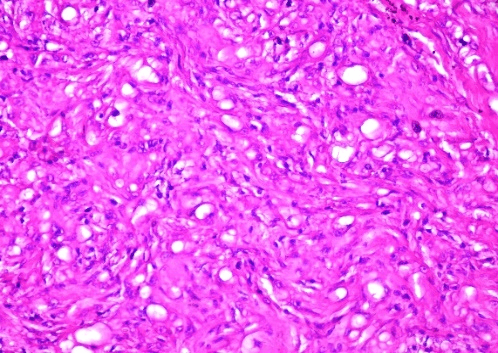 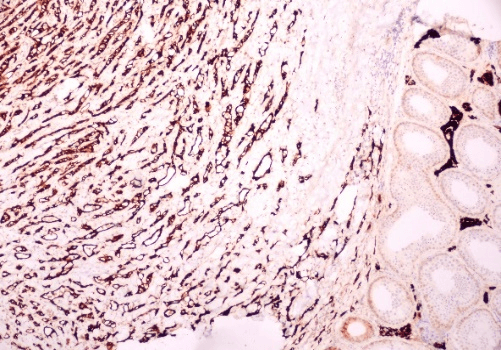 Mesothelioma usually arises from the pleural or peritoneal cavity. In only 5% of cases, it arises from the tunica vaginalis of the testis. Since the description of the first case in 1957. To this date, less than 250 cases have been reported in literature [2]. The age at onset is between 55 and 75 years. However, 10% of cases have occurred mostly in patients younger than 25-year-old [1].

Many predisposing factors for development of malignant mesothelioma have been considered, but the only well-established risk factor is asbestos exposure [1]. Our patient denied having any previous exposure to asbestos. In most cases, the clinical presentation is unspecific. Those tumors are slow growing, single, small sized, located upon or near the tail of the epididymis. It manifests as a painless scrotal mass associated with hydrocele. Ultrasound has an important role for diagnosis in testicular neoplasms. Malignant mesothelioma is usually characterized by a hypoechoic hydrocele with heterogeneous mass and an increased echogenicity at the periphery. In some cases, multiple paratesticular nodular masses with increased echogenicity arising from the scrotal wall could be found. Another important feature is a decreased vascularity of the lesion by colour Doppler imaging compared to healthy testicular parenchyma [2]. However, ultrasonography is not able to definitively determine the malignant nature of the testicular mass. Our patient had clinical and sonographic features suspecting malignant paratesticular tumor similar to previous description.

Diagnosis is established by pathology in the postsurgical setting. Microscopically, mesothelioma appears at first sight to be like adenoma, from the way in which the groups of cells are arranged. Tumor cells in mesothelioma vary in size, shape, and arrangement, ranging from flat plates to a low columnar type. The characteristic feature of the cells is that large numbers of them have a vacuolated cytoplasm and, while many of them are arranged in solid groups, others have a definite adenomatous formation. Another characteristic feature is the presence of numerous lymphoid-like cells scattered throughout the tumor. The histopathological features of our case closely resemble the above description. Immunohistochemically, it shows strong positivity for pankeratin and WT1, focal positivity for keratin5/6/7, and strong positivity for calretinin as indicated in our case. However, those markers are not specific, as they may be expressed in other cancers [3].

The differential diagnosis of paratesticular mesothelioma mostly includes both benign and malignant neoplasm arising in this site, such as adenomatoid tumor (benign non-papillary mesothelioma), cysts of the tunica albuginea, cysts of the testicular parenchyma. Computed tomography is helpful in tumor-staging, particularly in evaluation of retroperitoneal lymph nodes.

National Comprehensive Cancer Network evidence based cancer guidelines and other cancer-treatment guidelines made no recommendations for management of such a rare tumor [4]. Radical inguinal orchiectomy is the optimal treatment for paratesticular malignant mesothelioma. Simple excision of epididymis may lead to positive surgical margin and eventually recurrence. The necessity for inguinal or iliac lymph node dissection as primary therapy remains controversial [1].

Some patients are treated in a multimodal setting that includes surgery, chemotherapy, and RT, but the true efficiency of this regimen has not yet been established. Multimodal approach with chemotherapy and sequential RT should be offered for patients with gross residual tumor or in case of lymph nodes involvement. For chemotherapy, platinum with pemetrexed/raltitrexed is the standard of treatment in malignant mesothelioma [4]. As in our case, the patient did not receive radiotherapy or chemotherapy, as he was surgically treated at an early stage. Local recurrence is frequently observed, with more than 60% of relapses occurring within the first 2 years with a median survival of 24 months [1].

Tumors of the epididymis have always been considered to be extremely rare. Our case demonstrates a primary malignant mesothelium of the epididymis in a 28-year-old man. Surgery remains the main treatment, and multimodal therapies with chemotherapy and RT could be offered in some cases of gross residual disease after surgery or lymph node involvement. A multidisciplinary evaluation should be offered in those cases.

© 2021 Jasser Maatougui. This is an open-access article distributed under the terms of the Creative Commons Attribution License, which permits unrestricted use, distribution, and reproduction in any medium, provided the original author and source are credited. Hosting by Science Repository. All rights reserved.
DOI: 10.31487/j.SCR.2020.12.16