Ovarian tumors and tumor-like lesions during pregnancy are uncommon, with an incidence of approximately 1%, of which only 4% are of malignant nature [1]. Large solitary luteinized follicle cyst of pregnancy and puerperium (LSLFCPP) is a rare cystic lesion of unknown pathogenesis. Human chorionic gonadotropin (hCG) is believed to play a major role in its development, however, this association is questionable with several cases being described late in the puerperium or in the postpartum period. LSLFCPP can mimic malignant tumors and impose difficulty in management as it may grow to large size in a short period [4]. Although many times asymptomatic and incidentally identified during routine ultrasonographic studies, the rapid growth, and large size of these lesions may give an impression of malignancy. Patients sometimes present with pelvic discomfort and dyspnea [3]. They may also cause complications during the pregnancy and puerperium due to its large sizes, including, rupture, torsion, hemorrhage and adverse birth outcomes.

Our patient was a 21-year-old female, G1P1001 who presented seven weeks post-partum with pelvic pain. The patient had previously delivered a 38-week-old term female through spontaneous vaginal delivery at an outside institution, which was complicated by preeclampsia.

A CT scan and pelvic US was performed, and they showed bilateral ovarian cysts with the left ovarian cyst measuring 23 x 17 x 11 cm and right cyst 8 x 7 x 7 cm. She denied family history of ovarian cancer. The patient underwent laparoscopic left salpingo-oophorectomy wherein a large left ovarian cyst was identified and drained clear-yellowish fluid with admixed blood. The cyst was removed and submitted for frozen section examination. Gross examination showed a ruptured tan-white to tan-pink membranous smooth cystic wall measuring 10.0 x 9.5 x 2.5 cm that weighed 113.8g. The cyst was complex with cystic and solid components. No papillary excrescences were noted. The fallopian tube demonstrated a paratubal cyst and was otherwise unremarkable. No definitive ovarian tissue was identified. The frozen section was reported as a benign ovarian cyst and the right ovarian cyst was not submitted for frozen section analysis.

Microscopic examination showed the cyst was lined by single to multiple layers of large cells with abundant eosinophilic cytoplasm. Most cells showed small, round and regular nuclei. No mitosis or marked cytologic atypia was identified. The solid area of fibrous wall of the cyst also showed nests and linear arrangement of luteinized cells that were morphologically similar to the cyst lining cells. Inhibin immunohistochemical stain was performed and these cyst lining cells and nests and linear arranged cells within the solid area of cyst wall were positive. Reticulin special stain highlighted each of the luteinized cells of the cyst surrounded by reticulin fibers. A few typical small follicular cysts were also identified in the cystic wall. The histological findings are consistent with luteinized follicle cyst of pregnancy.

We describe a case of a 21-year-old with bilateral ovarian cysts. The larger of the two on the left was diagnosed as LSLFCPP 8 weeks postpartum. Although most cases are incidentally identified during routine prenatal exam, our patient was diagnosed 7 weeks postpartum after complaints of pelvic pain that led to further investigation and surgical intervention. Cases of large luteinized follicular cysts have been described up to 3 months post-partum. The pathogenesis is unclear, however, thought to be related to stimulation by human chorionic gonadotropin [4]. The occurrence during pregnancy and the co-existence of cystic follicles which are induced by hCG have supported this association. Cases like ours, where the cyst develops late in the puerperium or postpartum where the levels of hCG is low suggests that there may be other contributing factors for the development of the cyst and its enlargement. It has been proposed that that possible enlargement of the cyst late in the puerperium may occur as a result of increased levels of pituitary gonadotropins (LH and FSH) in nonlactating females. 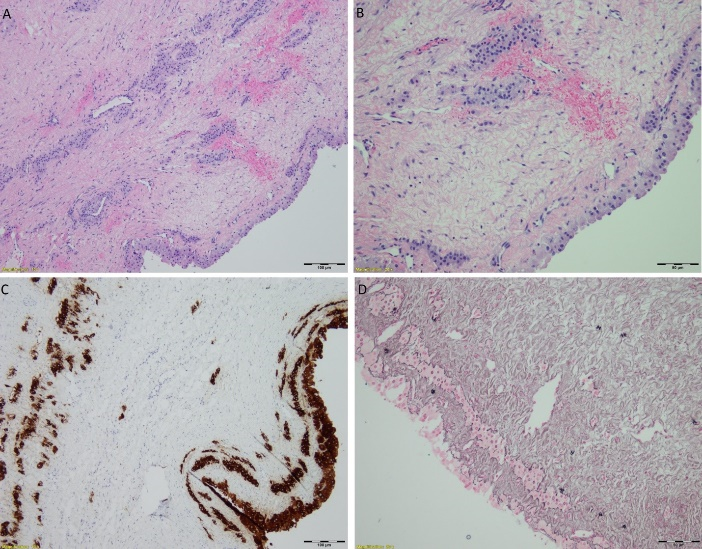 Gross features of these cysts are characterized by large, unilateral and unilocular cysts with smooth serosal surface. Content include clear serous, serosanguineous or coagulated “mucoid” material [4]. Microscopic examination shows a cyst with one to multiple layers of cells with densely eosinophilic to clear cytoplasm, focal pleomorphism and hyperchromatic nuclei. Lomme et al. have described the first case with mitotic figure indicating that the presence of focal mitosis can be seen in LSLFCPP. Inhibin stain, although not required for diagnosis will show diffuse positive staining of the luteinized cells. The differential diagnosis for this lesion includes functional cysts, paraovarian cysts, benign cystic teratoma, and cystic granulosa cell tumor adult and juvenile type. For these young women, providing an accurate diagnosis is important because once malignancy has been excluded, patients may be treated via conservative management. Needle aspiration alone has shown to diminish symptoms, provide diagnosis and could be curative [5]. Although cytologic aspiration has been reported as diagnostic and curative, most cases are managed with ultrasound evaluation and surgical intervention [3].

These lesions can create complications associated with their size alone. Fang et al described a case of a massive luteinized follicular cyst of pregnancy larger than the gravid uterus that reached a size of 55 cm in which conservative management was opted up to 36 3/7 weeks. Although sonographic evaluation has permitted conservative management in many cases complications such as rupture, torsion, and premature labor can occur.

Large solitary luteinized follicular cyst of pregnancy is a rare ovarian lesion with rapid growth that may lead to a challenging diagnosis and management. The sonographic characteristic of a large luteinized cyst and its benign nature often permits a more conservative follow up during pregnancy, however, complications may occur. In conclusion, awareness of this differential diagnosis in cases of a large cystic mass of pregnancy will lead to more appropriate management of the patient and fetus.

© 2021 Alessa Aragao . This is an open-access article distributed under the terms of the Creative Commons Attribution License, which permits unrestricted use, distribution, and reproduction in any medium, provided the original author and source are credited. Hosting by Science Repository. All rights reserved.
DOI: 10.31487/j.SCR.2019.03.05