Intracerebral Calcifying Pseudoneoplasm of the Neuroaxis (CAPNON) Presenting with an Atypical Immunohistochemical Profile: Case Report and Review of the Literature

Background: Calcifying pseudoneoplasm of the neuroaxis (CAPNON) is a very rare benign lesion that can be located anywhere in the nervous system, with only 59 intracranial cases described. The general lack of knowledge about this lesion hinders its preoperative diagnosis. Despite the consistent image findings, the final diagnosis is only established based on anatomopathological and immunohistochemical studies. The lesion is more commonly positive for epithelial membrane antigen (EMA) and vimentin, and negative for glial fibrillary acidic protein (GFAP) and S-100, suggesting a leptomeningeal origin. The opposite, however, may also occur, although very rarely (just two cases positive for GFAP and negative for EMA and vimentin reported this far). The treatment consists of total resection of the lesion, which yields a good prognosis.
Case Presentation: We report the case of a 23-year-old female who presented with disperceptive focal seizures, sometimes evolving to bilateral tonic-clonic seizures, starting at age 9. She had a nodular calcified lesion in the left precuneus and inferior parietal lobe. The lesion was completely resected, and the immunohistochemical study revealed positivity for EMA, vimentin, GFAP, and S-100. No case hitherto published was positive for all four markers. This atypical immunohistochemical profile of the CAPNON may suggest a dual origin of this lesion, both parenchymal and leptomeningeal.
Conclusion: The general lack of knowledge of CAPNON makes this lesion underdiagnosed. Therefore, in the face of a calcified lesion in the nervous system, one should consider the possibility of a CAPNON among the differential diagnoses. The immunohistochemistry is undoubtedly an important tool, but the anatomopathological study, associated with image findings, remain the gold standard for the diagnosis of CAPNON.

The nosological entity called calcifying pseudoneoplasm of the neuroaxis (CAPNON) was first described by Rhodes and Davis more than 40 years ago, but its etiopathogenesis remains still unclear [1]. With just 59 intracranial cases described, the disease presents nonspecific clinical manifestations, but a suggestive imaging aspect, which helps its diagnosis [2, 3]. This can be located in any region of the nervous system, determining the appearance of seizures, cranial nerves deficits, radiculopathies, and refractory headaches, among other findings. Complete surgical resection is usually curative, except for those lesions located in regions of difficult access or in eloquent brain areas, considering the high risk of morbidity [4-7].

We report the case of a female patient presenting imaging findings compatible with CAPNON, which was confirmed by the anatomopathological study. Interestingly, immunohistochemistry showed a profile completely different from all previously reported cases of CAPNON, highlighting the importance of the case here presented.

Female patient, 23-year-old, presenting with disperceptive focal seizures, sometimes evolving to bilateral tonic-clonic seizures, starting at age 9. Carbamazepine 600 mg daily was instituted at age 13, resulting in complete control of the tonic-clonic seizures, but not of the disperceptive focal seizures, which occurred once or twice a month. She had no other complaints. When asked, the patient denied any previous significant head injury or any other diseases. Neurological examination was completely normal. 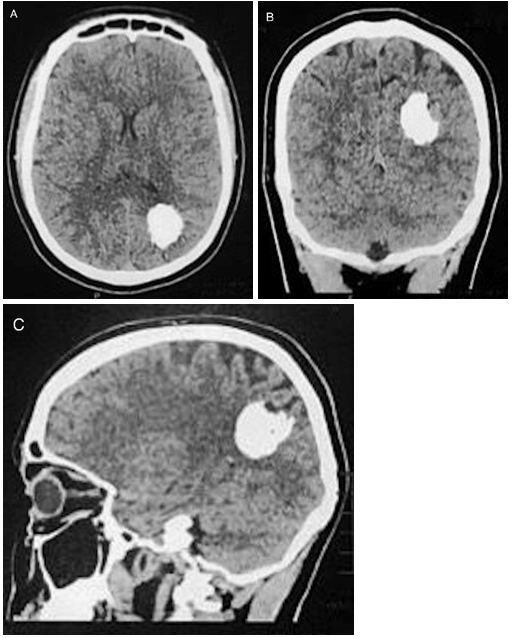 The electroencephalogram disclosed left centrotemporal cortical epileptogenic activity. Head computed tomography (CT) showed a nodular calcified lesion, located in the left precuneus and inferior parietal lobule (Figure 1). On brain magnetic resonance (MR), there was an oval-shaped lesion measuring 2.7 x 2.4 x 1.9 cm in its largest axes, of heterogeneous intensity but with a low signal intensity predominance, mainly on the susceptibility-weighted sequences, without restricted diffusion or contrast enhancement (Figure 2). There was little adjacent edema. Considering the significance of the voluminous calcification, a screening for metabolic disturbances of some minerals was performed: calcium, magnesium, ferritin, T4 (thyroxine), TSH (thyrotrophic stimulating hormone), calcitonin, and parathormone serum levels were normal, while phosphorus and transferrin serum levels were below the normal range. Cervical ultrasound depicted a well-defined solid oval nodule, predominantly hypoechogenic, located in the left thyroidal lobe, with central and peripheral vascularization; the parathyroid regions, though, did not show any abnormalities. At this moment, the diagnostic hypotheses of cavernoma, calcified neurocysticercosis, and calcified intra-axial meningioma were proposed. A lumbar tap was then performed, and the cerebrospinal fluid analysis was completely normal, being the immunological test (ELISA) for neurocysticercosis negative. 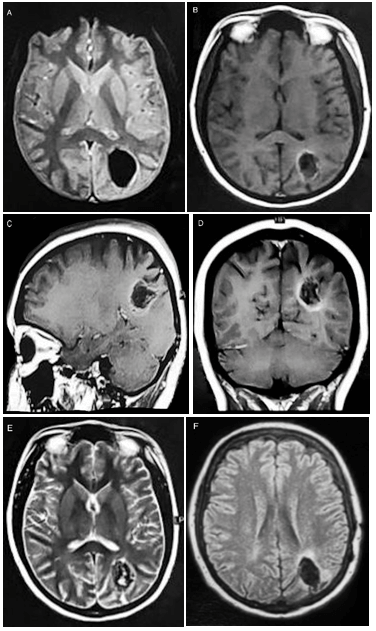 Figure 2: A) Preoperative brain MR showing a predominantly hypointense signal parietal lesion suggestive of calcification on T2*; B-D) A high intensity peripheral signal, that can be seen also in cavernomas and other hemorrhagic lesions, on unenhanced and post contrast T1-weighted images; E) An heterogeneous signal intensity on T2-weighted image; and F) A small amount of perilesional edema on FLAIR.

The patient underwent surgical resection of the lesion via a left parasagittal approach. Microsurgical en bloc gross total removal of the lesion was performed via a transulcal route through the intraparietal sulcus. Intraoperatively, the lesion had a solid characteristic, with a hardened consistency, presenting no adhesions to the cerebral parenchyma or any relationship with the meninges. Surgery was uneventful and the patient did not present any complications.

In the anatomopathological study, the lesion was well circumscribed, not encapsulated, and composed predominantly of spindle cells, with indistinct cytoplasm. In addition, it presented a delicate and fibrillar stroma with a prominent presence of calcified bodies, similar to psammomas, uniformly arranged (Figure 3). Immunohistochemical evaluation revealed cells diffusely positive for glial fibrillary acidic protein (GFAP), S-100, epithelial membrane antigen (EMA), and vimentin (Figure 4), and negative for progesterone receptor, pan-cytokeratins (AE1/AE3), Ki-67 (MIB-1), synaptophysin, and IDH-1. On CD34, no vascular anomalies were observed, and the reticulin stain revealed intact and parallel fibers. Based on these findings and on those from the imaging studies, the diagnosis of CAPNON was established. This diagnosis was confirmed by three other board certified pathologists, including a colleague from the University of Toronto. 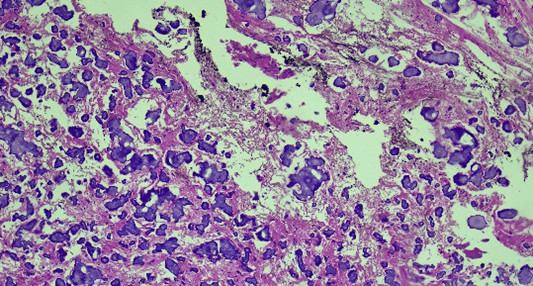 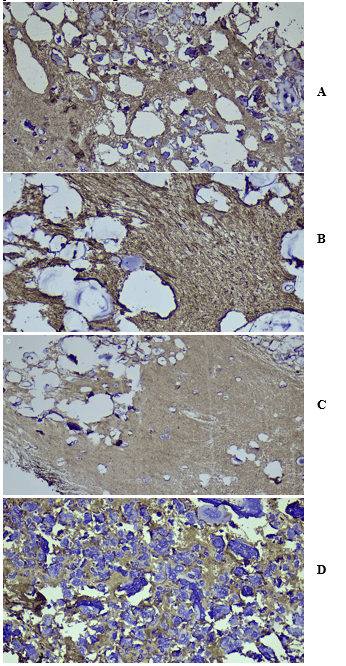 Early postoperative CT and late postoperative MR (36 months) confirmed complete lesion resection (Figure 5). The patient has been followed-up for 3 years, presenting, so far, a good outcome. A recent electroencephalogram was normal. She remains seizure-free since surgery and the anticonvulsant therapy (carbamazepine) was progressively discontinued.

CAPNON is a very rare benign lesion that grows slowly and can be located anywhere in the central nervous system, both intra- and extra-axially, or, even more rarely, in the peripheral nervous system. Due to its diversity of locations, the patient may present varied symptoms which are specific for each site [8-15]. Those with supratentorial intracranial lesions usually present with seizures, headache, and motor/sensory impairment [16-18]. Our patient had only treatment-resistant disperceptive focal seizures. The tonic-clonic seizures were well controlled with the anticonvulsant therapy.

CAPNON with intracranial involvement has been reported, so far, in only 59 patients, among which there was a slight predominance in males. The age of diagnosis varied between 8 and 83 years, the majority after the sixth decade of life [19].

The preoperative diagnosis of CAPNON is still difficult despite the suggestive radiological findings, which is probably due to the general lack of knowledge of this disease [19]. On CT, the characteristic finding is of a dense calcified mass, just as seen in our patient. However, the diagnostic hypothesis cannot be firmed solely on CT grounds since many intracranial lesions may present as calcified masses [20-22]. On MR, a characteristic pattern of a diffuse hypointense mass is observed in all sequences, especially on susceptibility-weighted ones, due to the presence of the calcification. Edema may or not occur and when present, it is usually of small magnitude. The popcorn aspect can also be observed, like that seen in the cavernomas. Contrast enhancement may or not occur, but when present, it is small and heterogeneous [21]. The differential diagnosis with vascular malformations can be established based on vascular studies, whereas for central nervous system infections (neurotoxoplasmosis and neurocysticercosis), lumbar tap with analysis of the cerebrospinal fluid is also important [23]. When in close proximity to the dura, it can be mistakenly diagnosed as a meningioma [24]. Even in cases of true intraparenchymal lesions, the possibility of an intracerebral meningioma should be kept in mind. Despite the consistent MR findings, the diagnosis of CAPNON could only be established after the anatomopathological study.

Pathogenesis of these lesions remains poorly understood. Reports have suggested that these lesions may develop as a distorted healing response to a causal factor such as trauma, infection or inflammation [25, 26]. It has also been hypothesized that the initiating event may involve a possibly localized metabolic dysfunction determining calcium deposition and/or anomalous blood vessels that permit excessive transport and accumulation of minerals in blood vessel walls or in the perivascular area. Over time the larger, older lesions may undergo ossification and cause a reactive fibroblastic and histiocytic response [23].

According with the review of the literature, the histopathological findings of the CAPNON include the pattern observed in our patient, which was described in several other cases, especially the scattered calcified basophilic bodies within spindle cells in a delicate and fibrillar stroma without mitoses. Other patterns that can be found are the chondromyxoid matrix in a nodular pattern, the osseous metaplasia, the foreign-body reaction with giant cells, and the psammoma-like bodies, of which only the latter was observed in our patient [4, 19, 27-31]. It is important to note that these characteristics may also be seen in entities such as chordomas, chondrosarcomas, osteosarcomas, meningiomas or schwannomas, which should be considered among the differential diagnoses.

Usually, CAPNON stains positive for EMA and vimentin, and is negative for S-100 and GFAP [18, 19, 30, 32]. The fact that the rimming “epithelioid” cells often are EMA immunoreactive suggests an association with, if not the origin from, the leptomeninges [33]. According to Ho et al. (2020), 93% of the intracranial CAPNON are related to the meninges, which can explain the EMA and vimentin immunoreactivity [2]. The positivity to GFAP, on the other hand, a finding only described twice before, suggests an exclusive intraparenchymal origin of these lesions; in such cases, though, the lesion was negative for EMA and vimentin [25, 33]. In our patient, curiously, the lesion was positive for all these markers. To the best of our knowledge, it is the first time this type of immunohistochemical profile was described, suggesting a dual origin of the CAPNON, i.e., parenchymal and leptomeningeal.

The final diagnosis of CAPNON can only be established based on both image and histopathological criteria [19, 30].

The general lack of knowledge of CAPNON makes this lesion underdiagnosed. Therefore, in the face of a calcified lesion in the nervous system, one should consider the possibility of a CAPNON among the differential diagnoses. The immunohistochemistry is undoubtedly an important tool, but the anatomopathological study, associated with image findings, remain the gold standard for the diagnosis of CAPNON.

Informed consent was obtained from the patient to publish the details of the case, and her identity has been protected.

All the data reported in this manuscript are available upon reasonable request from the corresponding author (OVF). These data are not publicly available due to the risk of compromising the patient privacy.

There were no special grants for this research. It was performed with the resources available on an everyday basis in the Division of Neurosurgery, Department of Surgery, Medical School, Federal University of Goiás.

All the authors contributed equally for this study and in the preparation of this manuscript.

The authors would like to express their gratitude to the colleagues Rômulo A. S. Marques, M.D.; Maurício S. B. Leite, M.D.; Élbio C. de Paula, M.D.; Israel B. S. Carneiro, M.D.; and Danilo Retucci for their help in the treatment and investigation of the patient reported in this manuscript.

© 2021 Osvaldo Vilela-Filho. This is an open-access article distributed under the terms of the Creative Commons Attribution License, which permits unrestricted use, distribution, and reproduction in any medium, provided the original author and source are credited. Hosting by Science Repository. All rights reserved.
DOI: 10.31487/j.SCR.2020.12.18

Figure 2: A) Preoperative brain MR showing a predominantly hypointense signal parietal lesion suggestive of calcification on T2*; B-D) A high intensity peripheral signal, that can be seen also in cavernomas and other hemorrhagic lesions, on unenhanced and post contrast T1-weighted images; E) An heterogeneous signal intensity on T2-weighted image; and F) A small amount of perilesional edema on FLAIR.