Increasing Head Circumference from Hydrocephalus, Not Only in Young Children: Case Report of a 7-Year-Old

A 7-year-old was referred to the neurosurgery clinic by ophthalmology for blurry vision and papilledema, with increasing headaches over the 2 weeks preceding his clinic visit. He underwent initial imaging, which demonstrated ventriculomegaly with dysgenesis of the cerebellum without absence of the vermis, and schizencephaly involving the left frontal and temporal lobes (Figure 1). A diagnosis of Dandy-Walker variant with hydrocephalus was made. Anecdotally, the head circumference was noted to have increased rapidly over a few months by the mother, who needed to change his hat size 2 times over 3 months. At that point the head circumference was measured at 57 cm.

The patient underwent a VP shunt insertion with a medium pressure valve, which initially resolved his symptoms. His head circumference stabilized at 57 cm. However, he presented to the office 4 months later with headaches similar in nature to the previous presentation. A repeat MRI at this point demonstrated stable ventricular size, and a head circumference of 57 cm. As the headaches were not invalidating and the papilledema was improved, the patient was followed clinically and with serial imaging. During the first year post shunt insertion, the patient’s symptoms stabilized, and he was noted to have improved cognitive performance compared to prior to shunt insertion. However, 10 months after his shunt insertion, the patient’s previous headaches returned along with non-specific dexterity issues.

Within 2 months, his head circumference increased once again up to 59 cm, although his MRI’s demonstrated relatively stable appearance of the ventricles (Figure 1). As his head circumference continue to increase to 59.5cm, and headaches increased, the patient underwent a VP shunt revision with a revision of his valve to a programmable valve (programmable valve set at 80 mm H2O) in December of 2018. There was no shunt obstruction noted intraoperatively. The patient’s headaches soon resolved following his second operation. His head circumference decreased then stabilized at 59 cm (Figure 2), which was still the case 22 months after the shunt revision (October 2020). Clinically, his headaches were much better, and the papilledema was resolved. 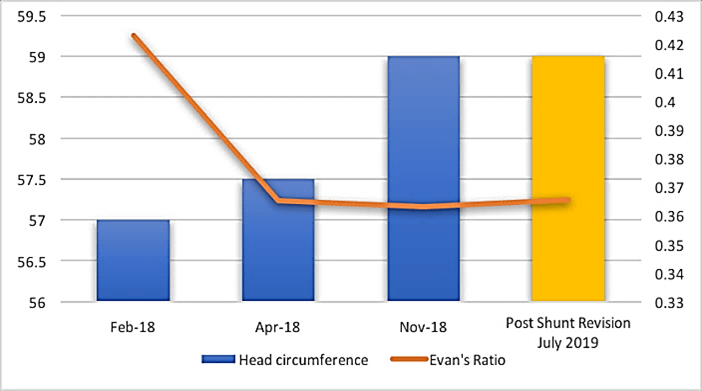 Figure 2: Timeline of increase in head circumference and change in Evan’s ratio pre and post operatively.

The development of the human cranium is a complex chronological process. To compensate for rapid brain growth, cranial sutures stay open in early childhood. The rate of suture fusion/closure varies according to the anatomical location. The metopic suture tends to fuse first between the ages of 3 months to 2 years, while the lambdoid, sagittal, and coronal suture may take up until the age of 40 before complete fusion [1]. However, head circumference growth typically slows down after 24 months of age but continues at a slow rate until adolescence [2].

A rapidly increasing head circumference is one of the first signs of hydrocephalus in infancy. This marker is used as an indication for CSF diversion, either with ventricular tapping through the anterior fontanelle, or with a definitive solution such as VP shunt insertion [3]. However, head circumference is rarely affected after the age of 3, and patients usually present with increasing headaches, nausea, vomiting, visual changes, and fluctuating level of consciousness with VP shunt malfunction. Rapidly increasing head circumference is almost never the first presenting symptom in preteens or young adolescents. Only one other case was found in the literature with a similar presentation. Gananlingham et al. reported suture diastasis in a 17-month-old boy, with no significant change in ventricular volume in a case of VP shunt malfunction [4]. From our center’s experience, one might even expect some rapid increased head circumference until 36 or 40 months, but we had never experienced it on a 7-year-old.

After CSF diversion, ventricular compliance can often decrease, and in certain cases the ventricles may fail to dilate despite raised intracranial pressure (ICP). This could be due to sub-ependymal gliosis or Laplace’s law, which states that the pressure needed to expand a small volume is greater than that required to expand a larger volume [5, 6]. This may explain our finding of our volumetric analysis (Figures 2 & 3), which demonstrated relatively stable ventricular volume/Evan’s ratio, despite the patient’s symptoms of increased ICP. However, another explanation is that when the skull can increase in volume, one can have a substantial volumetric increase by adding a few millimeters in the subarachnoid spaces instead of the ventricles especially in communicating hydrocephalus. With no other changes a head circumference increase from 57.5 to 59 cm would lead to an increase of more than 360cc of CSF in the subarachnoid spaces. 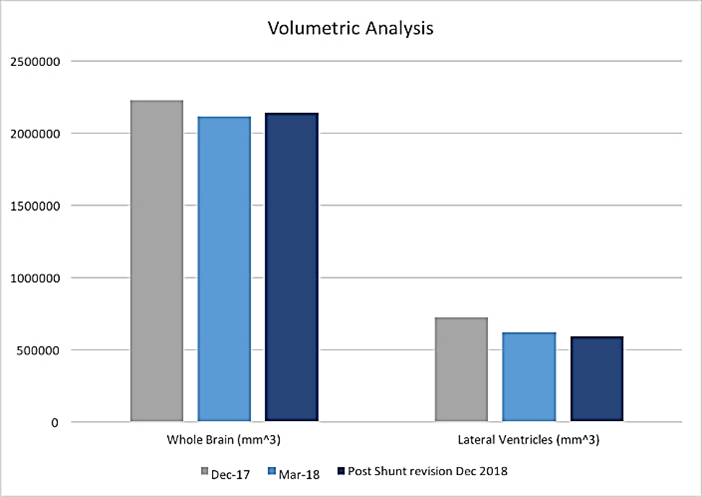 We present a unique case of increasing head circumference in a 7-year-old boy with hydrocephalus and Dandy-Walker spectrum malformation. While sutures are typically open until adulthood, rapid head circumference increase due to hydrocephalus is typically not seen after the toddler’s years. To our knowledge, only one similar case was reported in the literature but in a much younger patient.

© 2019 Sandrine de Ribaupierre. This is an open-access article distributed under the terms of the Creative Commons Attribution License, which permits unrestricted use, distribution, and reproduction in any medium, provided the original author and source are credited. Hosting by Science Repository. All rights reserved.
DOI: 10.31487/j.SCR.2020.11.17

Figure 2: Timeline of increase in head circumference and change in Evan’s ratio pre and post operatively.