Idiopathic Omental Infarct (IOI) is a rare cause of an acute abdomen that arises from an interruption of blood supply to the omentum. Since first case was described by Elitelin 1899, more than 300 cases have been published [1]. It can mimic serious surgical pathology. It occurs in <1% of appendicitis cases [2]. It’s challenge to diagnose, as features may mimic acute appendicitis and therefore in young patients, may only be discovered intra-operative. Here, we present a case of omental infarct in 26-year-old gentleman with no significant medical or surgical background who present with acute onset of right iliac fossa (RIF) pain. Examination revealed tenderness over the right iliac fossa and was having localized rebound. His inflammatory markers were high. He was successfully treated with laparoscopy surgery and he was subsequently discharged the following day.

Omental infarction is a rare cause of an acute abdomen that arises from an interruption of blood supply to the omentum and may be caused by torsion of the omentum around its vascular pedicle or venous outflow obstruction or vasculitis or thrombosis of the omental vessel, which can mimic the common presentations of acute appendicitis, acute cholecystitis or diverticulitis [3]. The omentum is double sheet of flattened endothelium with epiploic vessels, lymphatics, nerves, and fatty areolar tissue pass in between, hangs as a double fold between the greater curve of the stomach to the transverse colon with the right side usually longer and larger [4]. Size depends on the amount of fat, usually underdeveloped in infants. It acts as Policeman of the abdomen helps in walling of inflammatory conditions.

While mesentery is a reflection of the posterior peritoneum connects the intestine to the posterior abdominal wall and carries blood vessel and nerves. Root of the mesentery extends from the ligament of Treitz at the level of L2 and is approximately 6 inches. Mesocolon suspensory ligament of the transverse and sigmoid colon. Space of Riolan is avascular space to the left of the middle colic artery. Omental infarct can be classified as primary or secondary and can occur with or without torsion. Primary Omental infarct, with or without torsion occur commonly in obese patient and is associated with congenital anatomic variation [2].

26-year-old gentleman with no significant medical or surgical history, presented via emergency department with history of sever RIF pain for 1 day. He reported sever sudden, dull, non-radiating RIF pain, with no relieving or aggravating factors, associated with nausea and subjective fever. No history of vomiting, constipation, diarrhea or anorexia. He has also denied any previous abdominal trauma or recent surgery. No other associated symptoms. No previous similar illness. Systemic review unremarkable. No family history of any hematological disease. 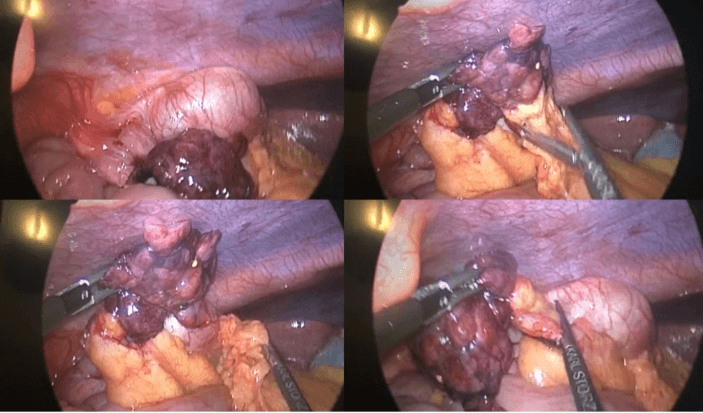 The exact pathogenesis of the omental infarction is still unclear but there have been many theories of how it occurs. In most instances is affecting the right side of the abdomen [4]. It can be divided into 2 classes primary and secondary and are commonly associated with risk factors such as anatomic variation in blood supply to the end of omental, obesity, trauma, coughing, sudden body movement [7]. Secondary causes include hypercoagulability, polycythemia, vasculitis and adhesions. Primary cause is considered when there are no recognizable causes found otherwise known as idiopathic [2]. In the above case, we think that this is likely a primary omental infarction case. Some authors have suggested that it is due to a different embryonic origin of the right sided omentum as the right sided omentum consist of more fragile blood vessel and are more susceptible to occlusion [4]. Some have also observed that omental infarction typically occurs after a heavy meal and is caused by venous engorgement and similarly. Obesity is a known risk factor, the hypothesis being that an excessive weight of the omentum cause venous engorgement and elongation also fatty omentum may occlude its own distal atrial branches [8]. From our reading, we summaries pathophysiology behind omental and mesenteric infarction.

i. Torsion twisting along its long axis causing vascular compromise. requirements for torsion is redundant segment and a fixed point. It can be Primary with predisposing factors such as projections from the edge of the omentum, obesity, and venous redundancy and secondary which associated with another pathology such as omental cysts, tumors, inflammatory conditions or hernias, right side twists more frequent [4]. Clinical manifestations will be sudden, constant pain, increasing in intensity associated with nausea and vomiting, on examination there will be signs of peritonitis and possible palpable mass [8].

ii. Idiopathic Segmental Infarction (acute vascular occlusion) not accompanied by torsion, intraabdominal conditions, trauma, or cardiac disease. Caused by thrombosis of the omental veins secondary to endothelia injury and usually involves the right side [9]. Clinical manifestation will be pain more of gradual in onset. Diagnosis through CT scan which will show a smudged appearance. Treatment will be excision of involved segment.

iii. Cysts which caused by obstruction of lymphatic channels and growth of congenitally misplaced lymphatic tissue. It will be manifested as palpable mass. X-ray can diagnose dermoid cyst. Ultrasound and CT scan could help to diagnose.

iv. Solid tumors, metastatic carcinoma most common. Hemangiopericytoma and leiomyosarcoma most common primary tumors. Diagnosis made by ultrasound or CT scan. Treatment will be excision of the primary tumor if possible and omentum.

i. Acute occlusion of the SMA, either embolic which manifested as sudden occlusion of the main branch of the SMA produces ischaemia of the entire small bowel distal to the ligament of Treitz and proximal half of the colon, or thrombotic which occurs in an artery partially occluded by atherosclerosis, slowly developing stenosis may allow time for collaterals to develop. Sudden complete occlusion first causing an ischaemic infarct in which the bowel is pale, later stages will show haemorrhagic infarction. It is surgical emergency with extreme abdominal pain not proportional to the pain the patient perceives, unresponsive to narcotics and absent bowel sounds with mottled, cyanotic bowel on exploration. Diagnosis made by arteriogram, patient will have leukocytosis, Hct hemoconcentration, metabolic acidosis. Treatment including NGT, antibiotics, anticoagulation, embolectomy and resection of affected part.
ii. Non-occlusive mesenteric infarction, caused by hypo-perfusion secondary to low cardiac output (CHF, MI), septic shock, arrhythmia. Diagnosis made by arteriography. Treatment consist of correction of hypo-perfusion status, vasodilators and antibiotics.
iii. Chronic occlusion of visceral arteries which will cause intestinal angina, ischaemia without infarction, food pain sequence. Pathology behind it is partial occlusion secondary to atherosclerosis. Clinical manifestation will be post-prandial crampy abdominal with weight loss. Diagnosis made by arteriogram. Treatment consist of arterial reconstruction, thromboendarterectomy, synthetic vein graft or resection of affected segment.
iv. Occlusion of mesenteric veins usually caused by thrombosis secondary to hyperemia, edema, or sub-serosal haemorrhage. Clinically manifested as vague discomfort and severe abdominal pain. Treatment consist of resection of affected segment, antibiotics and anticoagulant.

IOI is a rare benign condition, which can mimic clinically common serious intra-abdominal pathology and might only be diagnosed intra-operative. High suspicion in addition to proper radiological imaging could help to pick it up. Both surgical and conservative management are optimal with no evidence of superiority of one over the other. Our case diagnosed and managed surgically with no early nor late complications.

© 2021 Hamad Almakinzy. This is an open-access article distributed under the terms of the Creative Commons Attribution License, which permits unrestricted use, distribution, and reproduction in any medium, provided the original author and source are credited. Hosting by Science Repository. All rights reserved.
DOI: 10.31487/j.SCR.2020.12.07