Purpose: The aim of our study is to present a series of patients in whom we have administered HIPEC therapy.
Material and Methods: The treatment consists in performing cytoreductive surgery in patients diagnosed with potentially resectable pancreatic adenocarcinoma, together with the administration of HIPEC therapy with Gemcitabine. The dose of the drug is 120 mg/m2 for 30 minutes, followed by a conventional adjuvant treatment.
Results: Five patients diagnosed with pancreatic adenocarcinoma have undergone surgery with a curative nature. There were no technical or hemodynamic complications during the procedure.
Discussion: The use of HIPEC could achieve a decrease in the tumor progression of pancreatic cancer, improving the survival of the patient, and decreasing the recurrence of the disease. A larger number of patients will be necessary, as well as a long-term evaluation to assess the possible increase in survival in this group of patients.

Despite tremendous therapeutic advances, pancreatic cancer continues to present an unfortunate prognosis, constituting the fourth cause of cancer mortality in Western countries. We do not currently have effective therapies that improve survival rates, so there has been an increase in the mortality ratio in relation to the incidence of disease. One of the characteristics of this disease is the intense capacity for locoregional invasion, which increases its capacity for early recurrence and consequently worsens the prognosis of patients. That is why, although the patients are candidates for surgical resection with curative intent, the survival rates do not currently exceed 10% at 5 years [1].

A population of stem cells with malignant and undifferentiated transformation has been identified. They are called tumor stem cells and present a high index of self-renewal, high expression of development signaling molecules, and a great capacity to develop different cellular extirpations. This population of cells is not resected during surgery and is extremely resistant to intravenously administered chemotherapeutic drugs. In contact with them, the cells seem to maintain a state of dormancy and, after the completion of the treatment, they have the capacity to regain their highly proliferative activity. This results in the recurrence of the disease. These pancreatic tumor stem cells are undifferentiated cells and are characterized by the expression of the CD133 and CXCR4 markers. Identifying them and their elimination will facilitate the improved prognosis of the disease [2-5]. Therefore, for our study, we developed a new therapeutic model, characterized by the application of HIPEC with Gemcitabine, in order to improve the prognosis of pancreatic neoplastic disease by decreasing its locoregional recurrence.

At the General University Hospital of Ciudad Real, we started a prospective study involving the administration of HIPEC with Gemcitabine to inhibit peritoneal carcinomatosis of pancreatic origin. After surgical resection and intestinal reconstruction, HIPEC would be administered with Gemcitabine at a dose of 120 mg/m2 for 30 minutes. Later, patients would receive adjuvant treatment based on 4 cycles of Gemcitabine intravenously (1000 mg/m2).

To perform HIPEC, we used the model developed for closed access and CO2recirculation (PRS Combat®, Galmaz Biotech SL). The system included a gaseous exchanger that visually controlled the filling of the abdominal cavity with the hyperthermic solution and the drug and allowed the exit of the CO2 that was used to homogenize the distribution of the drug by turbulence. During the recirculation of the drug, Gemcitabine 120 mg/m2 over a 30-minute period, we used CO2to generate turbulence at doses of 0.6-0.7 l/min, with controlled pressures (up to 15 mmHg). The CO2used was aspirated from the abdominal cavity through the gas exchanger.

We have initiated a locoregional treatment in our Center using HIPEC with Gemcitabine. To date, we have treated a total of four patients with resectable pancreatic adenocarcinoma, together with the administration of HIPEC. In all five cases, the patients debuted with painless obstructive jaundice, so that several studies were conducted to determine the origin of this condition. After the diagnosis of pancreatic cancer, and after evaluating the resectability of the lesion, the patients underwent surgical treatment with curative intent. The patient underwent the duodenopancreatectomy, and lymphadenectomy with subsequent intestinal reconstruction and, subsequently, HIPEC was administered at a dose of 120 mg/m2 for 30 minutes (Figure 1). 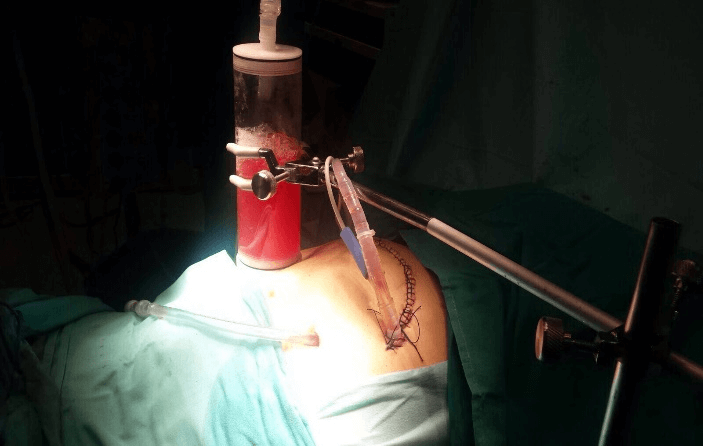 There were no technical or hemodynamic complications during the procedure. The patients remained in the Intensive Care Unit for 48 hours according to our protocol. During the postoperative period, one patient presented a situation of paralytic ileus that resolved with conservative therapeutic measures. The rest of the patients presented appropriate tolerance and preserved intestinal transit. No complications were documented in the immediate postoperative period or the first 30 days after surgery, and the final anatomopathological result was adenocarcinoma of the pancreas. There were also no clinical or analytical complications associated with the possible toxicity of the drug.

Though the best results have been achieved with systemic Gemcitabine, as opposed to other drugs, in the treatment of pancreatic cancer, its activity seems to be low when used on pancreatic tumor stem cells. These cells present significant resistance to the activity of chemotherapy drugs administered intravenously, which causes them to remain in a latent state, and, after the completion of the chemotherapy treatment, the cells resume their proliferative activity, resulting in apparent recurrence in the patients.

In 2016, our research group published an experimental model in immunosuppressed athymic rats. This model involved the development of a model of peritoneal carcinomatosis of human pancreatic origin through the inoculation of the peritoneal surfaces of these animals with BXPC-3 human pancreatic adenocarcinoma cells. We obtained encouraging results, indicating the significantly greater elimination of the pancreatic tumor stem cells CD133+ CXCR4+ in the group in which HIPEC was administered than in the other two treatment groups (p <0.05). There was also a significant decrease in the tumor volume as assessed using the peritoneal carcinomatosis index (PCI) than in the two other treatment groups (p <0.05) and there were no technical complications during its administration, being an applicable model that was reproducible in these animals [6]. These data pushed us to believe in the benefit of using locoregional treatment associated with radical surgery, together with the administration of HIPEC, in pancreatic cancer. In this way, we could eradicate macroscopic and microscopic residual disease after surgery and ultimately eliminate the locoregional permanence of the tumor stem cells that were responsible for the recurrence of the pancreatic neoplastic disease and the poor prognosis of the patient.

There is currently a series of isolated cases described in the literature, with hopeful results that favor the use of HIPEC. The Washington Cancer Institute presented the initial results of a Phase II study on the administration of intraperitoneal adjuvant Gemcitabine in seven patients with resectable pancreatic adenocarcinoma. The authors concluded that the intraperitoneal administration of the drug was well tolerated without documented complications or serious toxicity secondary to the procedure [7]. Tentes et al. identified the benefits of HIPEC with Gemcitabine in patients undergoing a complete tumor resection for pancreatic cancer and the author concluded that the safe and effective use of intraperitoneal Gemcitabine with HIPEC seemed justified as adjuvant treatment for pancreatic cancer [8]. This same group recently published a study involving 33 patients with resectable pancreatic adenocarcinoma associated with the administration of adjuvant HIPEC. Survival at 5 years was 24%, and the recurrence rate was 60.6% at a follow-up of 11 months, leading to the conclusion that the use of this therapy could be effective for the locoregional control of the disease [9].

Arjona et al. reported a case of carcinomatosis of pancreatic origin secondary to recurrence due to a mucinous neoplasty. The PCI was 20/39, and the procedure included complete peritonectomy, splenectomy, omentectomy, hysterectomy and double adnexectomy, appendectomy, the removal of all mesenteric implants and those of the Glisson capsule, and iliac and paraaortic lymphadenectomy. After complete CCR was achieved, HIPEC was administered with Mitomycin C (30 mg) at 42°C for 60 minutes in continuous infusion with 4,000 milliliters (mL) of 1.5% dextrose solution. No complications were reported, and the authors concluded that this approach could be considered in selected patients with carcinomatosis of pancreatic origin, instead of solely considering them to be candidates for palliative treatment [10].

Unlike the other researchers, we administered HIPEC using the closed technique and CO2recirculation thanks to the PRS Combat system. Through this system, we addressed some of the disadvantages of other modalities, concluding that we managed to maintain a homogeneous and constant distribution of temperature and fluid, with a controlled intra-abdominal pressure, throughout the procedure [11-13]. These antecedents to the subject, as well as the need to establish a more exhaustive methodology. Although we cannot present definitive data, there have been no documented complications associated with the administration of HIPEC in this group of patients. We believe that the use of HIPEC will decrease the tumor progression of pancreatic cancer by reducing the neoplastic volume and subpopulation of pancreatic tumor stem cells, improving the patient's survival, and reducing the recurrence of the disease. A larger number of patients will be necessary, as well as a long-term evaluation to assess the possible increase in survival in this group of patients.

All procedures performed in studies involving human participants were in accordance with the ethical standards of the institutional and/or national research committee and with the 1964 Helsinki declaration and its later amendments or comparable ethical standards.

Informed consent was obtained from all individual participants included in the study.

© 2019 Esther Pilar García Santos. This is an open-access article distributed under the terms of the Creative Commons Attribution License, which permits unrestricted use, distribution, and reproduction in any medium, provided the original author and source are credited. Hosting by Science Repository. All rights reserved.
DOI: 10.31487/j.SCR.2020.07.16