Fibromatosis of the breast represents <0.02% of all breast tumors. Typically, fibromatosis is non-metastasizing but locally aggressive and is treated with surgical excision. We report a case of a nonagenarian requiring mastectomy for an epidermal inclusion cyst that diagnostically mimicked fibromatosis of the breast. She underwent diagnostic breast imaging for a period of almost two years to monitor the size of her breast tumor. However, in a six-month timeframe, her mass dramatically increased in size and was becoming symptomatic to the patient. The rapidly growing tumor was concerning for occult breast malignancy.

Epidermal inclusion cysts are commonly found on the scalp, face, neck, trunk, and extremities and typically present with classic dermal findings of an erythematous papule with a central punctum [1-4]. Based on a literature review from 2015 by Paliotta et al., 82 cases of epidermal inclusion cyst in the breast were reviewed and a total of 90 cases have been reported in the international literature. Causes of epidermal inclusions cysts include congenital factors, obstruction of a hair follicle, epidermal fragment implantation into the dermis secondary to damage to the epidermis, or in the case of fibrocystic disease development of squamous metaplasia of columnar cells within a dilated duct [1-4].

Fibromatosis is a benign tumor that accounts for <0.2% of all breast tumors but is locally invasive and non-metastasizing with a high local recurrence rate. It most commonly presents in women aged 25-45 and can mimic breast malignancy [5, 6]. We present a case of a nonagenarian presenting with a giant epidermal cyst of the breast mimicking fibromatosis who underwent mastectomy for primary surgical treatment.

A 92-year-old female was referred to our breast center with a large left breast mass. She has a personal medical history of hypertension, coronary artery disease, asthma, atrial fibrillation, hyperlipidemia, and gastroesophageal reflux disease. She reports a family history of breast cancer in her mother at 70 years old, a paternal grandmother at unknown age, and her paternal aunt at 47 years old. She underwent bilateral screening mammogram two years prior to surgical presentation where an asymmetry was noted in the left breast, BIRADS 0. She then underwent left diagnostic mammogram revealing a persistent left breast asymmetry.

Seven months later she returned for left diagnostic mammogram which showed stable post biopsy changes with no evidence of malignancy (BIRADS 2). She returned five months later and bilateral mammogram at that time revealed the mass had increased to 2.4 cm. Repeat left breast ultrasound four days later identified a lobulated hypoechoic mass at the prior biopsy site with biopsy marker in place measuring 2.7 × 2.3 cm (BIRADS 2). She returned five months later noting enlargement of the mass and ability to palpate it on self-breast exam. Ultrasound showed the left breast hypoechoic mass in the same position measuring 3.7 × 3 cm (BIRADS 2).

The patient then returned to the breast center six months later for surgical evaluation because the mass continued to enlarge and was becoming bothersome. On exam, there was an irregular 5-6 cm mass in the central, outer breast without erythema or drainage from the skin. No visible punctum was noted. Ultrasound of the left breast showed an irregular hypoechoic mass in the same position measuring 6.5 × 5.2 cm (BIRADS 4B). Due to concern for potential malignancy in a rapidly enlarging mass in a nonagenarian, and possibly false negative biopsy two years prior, she underwent repeat ultrasound guided core needle biopsy at the direction of the breast surgeon. Pathology of the 2nd biopsy showed a spindle cell lesion consistent with fibromatosis without atypia (Figure 1). 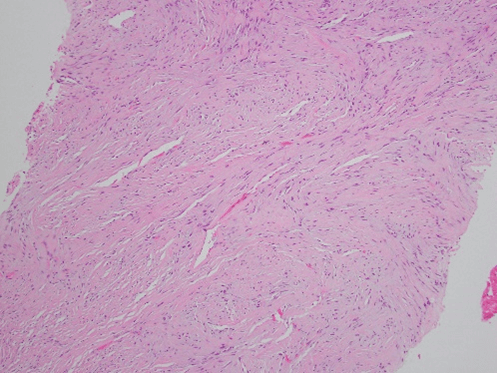 She returned for breast surgical consultation after her biopsy. Repeat breast exam at that time was unchanged except for a bruise from the biopsy. She was endorsing pain in the left breast specifically at night. The patient was counseled on her treatment options which included wide local excision/left lumpectomy or continuing to observe the mass. While both core biopsies were benign, and benign breast surgery in a nonagenarian typically is avoided, the clinical concern was that the mass would continue to grow and eventually cause skin breakdown and an open wound. The patient agreed to wide local excision of the left breast mass and surgery was scheduled approximately 6 weeks later.

On the day of surgery repeat breast exam revealed the left breast mass had increased in size, was present on both the medial and lateral aspect of her nipple areola complex and was encompassing the majority of the patient’s breast. There was no erythema or drainage. The patient was strongly advised to consider mastectomy and reconsented for mastectomy. She underwent uneventful left mastectomy without axillary staging. She was admitted overnight for observation and was discharged home from the hospital on post-operative day 1 without complication. She followed up at the breast center on post-operative day 6. She was doing well at that time and her pain was well controlled. Her exam was notable for a healing mastectomy incision without evidence of erythema, drainage, or seroma. Her Jackson Pratt drain was removed on post-operative day 9.

Final surgical pathology of the mastectomy specimen demonstrated a 6.5 cm epidermal inclusion cyst with robust associated fibrosis involving the skin and breast parenchyma. No fibromatosis was identified. Stains for CK5/6 and p40 were negative; CAM5.2 and beta-catenin were negative (Figures 2A & 2B). 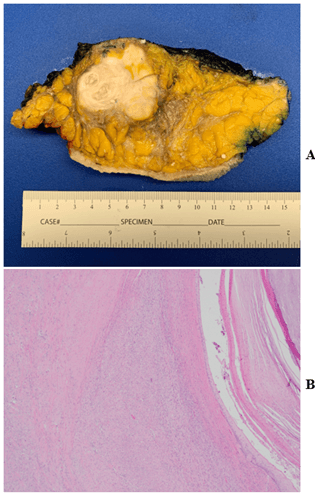 Figure 2: A) One cross section from total mastectomy specimen showing dense fibrosis surrounding minor cystic component. B) Histologic sections from cystic cavity (right) and fibrosis (left) which appears similar to that of the prior needle core biopsy, 100 x magnification.

This case of a nonagenarian with an enlarging breast mass presents some unique diagnostic challenges when compared to the typical presentation of an epidermal inclusion cyst and fibromatosis. The tumor demonstrated rapid growth which prompted total mastectomy. Standard treatment for both an epidermal inclusion cyst and fibromatosis is surgical excision. While there is a 35% chance of local recurrence with fibromatosis, the risk of recurrence is decreased with disease-free margins [5]. In determining the best treatment option for this patient who is 92 years old with multiple comorbidities, persistent tumor growth and concern for malignancy despite multiple biopsies indicating benign pathology were considered.

In 2012, Debnath et al. published a case review of a patient who underwent simple mastectomy for a breast lesion that was concerning for malignancy based on mammogram and ultrasound but was ultimately benign on biopsy. The patient’s final pathology revealed her lesion was an epidermal inclusion cyst. At that time, this was the first reported case of an epidermal inclusion cyst that required mastectomy [4]. Typically, surgical excision is performed to remove symptomatic, large lesions to confirm diagnosis and rule out malignancy. While surgical excision was the original plan for this patient, her lesion continued to increase in size and was found in pre-operative hold to be encompassing almost her entire breast. At that time, the surgical plan was changed to simple mastectomy. From the study by Paliotta et al., the average size of breast lesions was 4+/-3 cm, whereas this patient’s breast mass ended up measuring 6.5cm. Both size and the need for simple mastectomy offer further unique aspects of this case.

The presence of the robust fibrosis mimicking fibromatosis on histologic examination is another unique aspect of our case. Microscopic examination of the total mastectomy specimen demonstrated that majority of the very large lesion was composed of fibrosis, with only a minority component of keratinaceous debris and foreign body giant cell response. Histologic sections taken from these areas of fibrosis were morphologically compared to the patient’s second needle core biopsy which had prompted a diagnosis of fibromatosis. The two appeared morphologically identical with bundles of bland spindled cells with associated small caliber vessels, patchy inflammation, and tram-track positivity for smooth muscle actin immunostain and negative desmin and AE1/3 staining. Of note, an immunostain for B-catenin, positive in 80% of cases of fibromatosis, was negative for nuclear staining. The erroneous diagnosis of fibromatosis was only apparent via the gross examination of the mastectomy specimen which showed small cystic areas with keratinaceous debris as well as the histologic sections showing keratinaceous debris and foreign body giant cell response intimately admixed with these areas of fibrosis [7]. Review of tumor histology demonstrated many stages of fibrosis (both young: cicatricial and old: hyalinized), implying multiple stages of rupture and healing.

This case illustrates the diagnostic and management challenges of enlarging breast tumors in a nonagenarian with multiple comorbidities. In assessing patients like this, risks of surgery versus benefits of avoiding open wounds and occult malignancy must be weighed. Specifically for this patient, rapid tumor growth raised concern for malignancy and skin breakdown leading to the decision to proceed with mastectomy.

© 2021 Emily Austin. This is an open-access article distributed under the terms of the Creative Commons Attribution License, which permits unrestricted use, distribution, and reproduction in any medium, provided the original author and source are credited. Hosting by Science Repository.
DOI: 10.31487/j.SCR.2022.08.04

Figure 2: A) One cross section from total mastectomy specimen showing dense fibrosis surrounding minor cystic component. B) Histologic sections from cystic cavity (right) and fibrosis (left) which appears similar to that of the prior needle core biopsy, 100 x magnification.