Background: Gardner’s syndrome (GS) is an autosomal dominant inherited disease that predisposes individuals to a high risk of developing colonic polyposis, colorectal cancers, and multiple maxillofacial hard and soft tissue tumors. Odontogenic myxoma (OM) is classified as a benign locally invasive tumor of the jaws. It is estimated as the third most frequent odontogenic tumor, between 2% and 5% of cases. In the present study, we report and discuss a case of odontogenic myxoma in a 13-month-old patient diagnosed with GS.
Case Presentation: A 13-month-old patient was referred to our department with a fast-growing tumor located in the left nasomaxillary region and a family history of GS. Computed tomography imaging of the face with contrast was performed, showing a well-defined, insufflating osteolytic lesion located in the left nasomaxillary region, extending up to the inferior orbital wall. The tumor was biopsied, and he was diagnosed with OM. Radical resection was performed and the anterior maxilla wall was reconstructed with PDS. Subsequently, germline mutation in APC gene was found in the patient. Follow up was carried out up to seven years after the intervention, an excellent cosmetic outcome and no signs of recurrence were observed in the area.
Conclusion: Oral and maxillofacial surgeons must be aware of the different lesions which may be associated with systemic syndromes. OM may be first manifestation related to early diagnosis of GS and, lastly, colon cancer. OM could be an indication of referring to genetic counselling to determine the presence of the mutation in patients with or without familiar history.

Gardner’s syndrome (GS) is an autosomal dominant inherited disease that predisposes individuals to a high risk of developing colonic polyposis, colorectal cancers, and multiple maxillofacial hard and soft tissue tumors [1]. It was described by Gardner in 1953 and it is a variant form of familial adenomatous polyposis (FAP). Specifically, it was demonstrated to be defined by a mutation in the band of chromosome 5q21-q22, the adenomatous polyposis coli locus (APC gene). The prevalence ranges between 1 per 8000 to 1 per 12,000 new-borns [1]. Although osteomas usually present during puberty, approximately 70% of patients also present dental alterations (supernumerary teeth, congenitally missing teeth, hypercementosis, dentigerous cysts, odontomas, impacted teeth, fused or unusually long roots, caries), even in infancy [2]. These alterations tend to precede clinical and radiological signs of polyposis, and are guessed at around 10 years [1]. Therefore, the early diagnosis of maxillofacial alterations of GS is of utmost importance to generate awareness and prevent malignant polyp transformations.

Odontogenic myxoma/myxofibroma (OM) is classified as a benign yet locally invasive tumor of the jaws. It is estimated as the third most frequent odontogenic tumor, ranging between 2% and 5% of cases, presenting between the third and fourth decades of life [2]. The occurrence of OM in the mandible is higher when compared to the maxilla (2:1). However, maxillary lesions of OM tend to obliterate maxillary sinuses as an early feature, expanding the outer cortex [2]. In the present study, we report and discuss a case of odontogenic myxoma in a 13-month-old patient. The case here reported is the second published in the literature describing the occurrence of this type of tumor at such an early age and associated with Gardner’s syndrome.

A 13-month-old patient was referred to the Oral and Maxillofacial Surgery Department of the La Paz Children’s Hospital with a fast-growing tumor located in the left nasomaxillary region. Regarding previous medical records, the mother and older brother suffered from Gardner’s syndrome. Computed tomography imaging was performed, showing a well-defined, insufflating osteolytic lesion located in the left nasomaxillary region, extending up to the left medial canthus, with the adjacent remodelling of the inferior orbital wall, left nasal bone, and protruding the ipsilateral eye. As a whole, the mass had a size of 31×23×48 mm, occupying the nostril (Figure 1). A nasoendoscopic biopsy was performed, suggesting a fibromyxoid tumor. After the results, radical resection was performed through an intraoral approach in the left maxilla, including a peripheral ostectomy and lateral nasal wall reconstruction with a PDS plate (Figure 2). 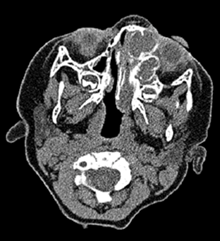 Figure 1: Preoperative computed tomography of the face with intravenous contrast. 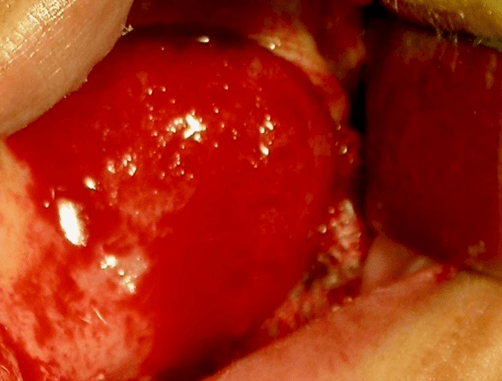 The definitive anatomopathological analysis revealed a moderately cellular tumor with a well-vascularized myxoid stroma. The cells were spindle-shaped or stellate with extensive eosinophilic cytoplasm. No areas of necrosis, chondroid stroma, or dense collagen bundles were identified. By immunohistochemical study, the tumor cells showed a diffuse immunoreaction against vimentin and the cell proliferation index with Ki67 was approximately 1%. No tumor immunoreaction was observed against s-100, B-catenin, smooth muscle actin, desmin, calponin CK19, CD34, neuron-specific enolase, CD68, or MUC. The lesion was compatible with odontogenic myxoma without histological data of malignancy. Subsequently, due to this early and fast-growing tumor, and her family history of GS, genetic testing was performed and a germline mutation in the APC gene was found (c.3880C>T (p.Gln1294Ter)), confirming the diagnosis of GS. During the seven-year follow-up, no signs of recurrence were found and an adequate pneumatization of both maxillary sinuses and ethmoid cells was observed, with an excellent cosmetic outcome (Figure 3). 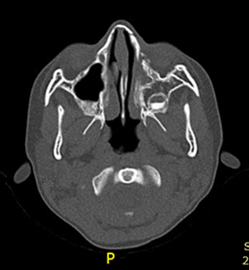 However, one year later, magnetic resonance imaging (MRI) showed a minimally enhancing cystic lesion (2.2 cm) with a similar radiological appearance, with T2 hyperintensity and no solid enhancement, located in the diploe of the greater wing of the right sphenoid. A “wait and see” strategy was decided, due to the risks associated with the removal of the lesion in this location, and no radiological changes in the MRI were reported up to date, 7 years later (Figure 4). 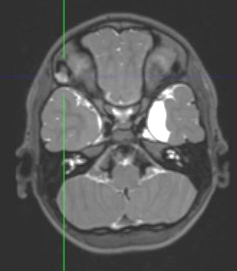 Although odontogenic myxomas are more common between the third and fourth decades of life, sinonasal myxomas have been described almost exclusively in children, with an average age of 15.4 months, and are generally situated within the sinonasal complex or maxilla. This is the second reported case of an odontogenic myxoma in Gardner’s syndrome patients, the first of a sinonasal myxoma. The first reported case was a 14-year-old male patient, whose myxoma involved the entire left half of the mandible and presented multiple facial osteomas. The patient referred dental and cosmetic issues, without gastrointestinal symptoms (he already had asymptomatic polyps) [3, 4]. Osteomas are the most representative maxillofacial lesion of GS. They usually appear earlier than polyposis and have been proposed as a screening method for GS, since around 46% of the patients often show three or more lesions. The diagnosis must be confirmed by specific genetic testing [1].

In our case, due to the young age of the patient, not only does OM precede colonic symptoms, but also it was diagnosed before the appearance of polyps. The diagnosis at an early age and the fast growth of the tumor generates awareness, allowing for an earlier diagnosis and, subsequently, a closer control leading to early detection of polyps before they undergo any malignant differentiation. Furthermore, given the positive familial history, genetic testing was done, which confirmed the suspicion of GS. Treatments of OMs are controversial and vary from curettage to radical resection. According to the literature reviewed, the recurrence rate ranges from 10% to 30% [5]. If left untreated, the tumor could grow to a large size due to its locally aggressive behaviour. In our patient, the first sinonasal myxoma was treated aggressively, given the rapid growth and the high theoretical recurrence rate these tumors may present, showing no signs of recurrence at the longest follow-up. However, our patient also presented seven years later, another lesion suggestive of myxoma, which was managed conservatively due to its surgical inaccessibility, showing no signs of growth on radiological follow-up nor symptoms.

Oral and maxillofacial surgeons should rapidly recognize GS-associated lesions they might encounter, and therefore enable an early diagnosis of GS, potentially leading to early detection of colon cancer. OMs are characteristic of GS and precede gastrointestinal malignancies. The presence of such should raise awareness and the patient should be referred immediately for genetic counseling to determine the presence of characteristic GS mutations. OMs may be managed in a conservative or more aggressive manner. In the present case, both approaches showed no signs of recurrence. Therefore, a conservative approach may be acceptable when lesions are located in difficult anatomic regions.

All data generated during this study are included in this published article.

Informed consent was obtained from the patient and the patient’s family for the publication of this case report, without face images.

JP: Wrote and Prepared the Manuscript Under the Supervision of EG; JL, EG and MM: Performed the Surgery; Other co-authors: Discussed the Content of the Manuscript; All authors read and approved the final manuscript.

© 2021 Juan Pablo Rodríguez Arias. This is an open-access article distributed under the terms of the Creative Commons Attribution License, which permits unrestricted use, distribution, and reproduction in any medium, provided the original author and source are credited. Hosting by Science Repository.
DOI: 10.31487/j.SCR.2022.04.02

Figure 1: Preoperative computed tomography of the face with intravenous contrast.