Objective: Amputations of fingers and significant parts of upper limbs are common following industrial injuries. This study was aimed at assessing the functional outcome in patients with hand replantation following amputation at the level of distal forearm or wrist.
Methods: Patients presenting with amputation at the level of wrist and forearm between Jan 2015 and December 1018, with adequate follow up were included. The function in terms of total active motion at the fingers and wrist, sensory recovery, and patient satisfaction and DASH scores at the final follow up were noted.
Results: Four cases of replantation at the level of wrist and one replantation at distal forearm level were included in the study. A total of 3 patients were excluded for various reasons. The average follow-up period was 38 months. The average total active motion of fingers achieved was 212○. All patients recovered protective sensations.
Conclusion: Replantation of amputated major upper limb parts restores useful function and should be attempted. Minimizing ischaemia time, secure fixation, primary repair of structures and early motion are determinants of reasonable functional outcome. Level of evidence: IV.

Amputation of a significant part of the limb is a devastating injury that is likely to have long-lasting functional and psychological consequences on the patient's life. Replantation of body parts is undoubtedly one of the significant advances in managing these injuries that have been achieved in the latter part of the 19th century. Malt reported the first successful major replantation of a limb in 1962, soon followed by Chen in 1964 [1, 2]. Subsequently, with refinements in instrumentation and growing microsurgical experience, many more of such injuries have been salvaged [3-6].

While modern prosthetic devices are claimed to have improved performance, the prosthesis still is perceived as “merely a device supporting opposite healthy limb” [7]. A systematic review has suggested high satisfaction rates as well as the psychological superiority of replantation over the prosthesis [7-9]. In this retrospective study, we have tried to assess the functional outcome following replantation at the level of wrist and the forearm. This is first such report assessing function after replantation from Sultanate of Oman.

Charts of the included patients were reviewed for the age, gender, extremity involved, the mechanism of injury, the ischaemia time, the procedure performed, outcome, complications if any and secondary surgeries performed. The total active motion (TAM) of the digits in the involved extremity and sensations over the digits and DASH scores at the final follow up were noted. These patients were contacted telephonically (visits could not be arranged due to COVID-19) to assess their current activity status, pain, and overall satisfaction, by an independent observer.

A 27-year-old male presented with amputation of his right hand with a paper cutting machine (Figure 1). He was brought to the hospital with the amputated part that could be attached and re-vascularised within three hours of his arrival. He recovered useful function, including some intrinsic muscle function (Figure 2). Primary repair of all structures helped him start early mobilization, and he needed minimum secondary interventions. 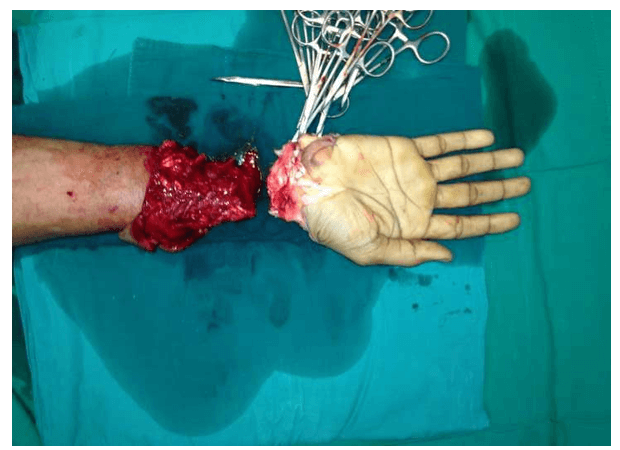 Figure 1: Amputation of the right hand at the level of the wrist, essential structures have been identified and tagged with sutures separately. Direct crushing of structures with hemostat should be avoided. The proximal part is being prepared. 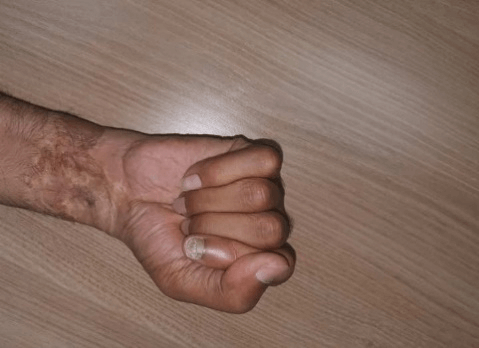 Figure 2: The hand function after three years following replantation. The function of the long flexors as well as reasonably maintained thenar eminence suggesting intrinsic recovery can be appreciated.

A 28-year-old male presented with crush amputation of his right forearm in a wood cutting saw. He sustained amputation through the distal forearm (Figure 3). The index and long fingers had a second level of injury. To save on ischaemia time, an external fixator was applied, and the hand was re-vascularized. The flexors to the index and long digits could not be repaired primarily due to multilevel nature. He needed multiple secondary surgeries including definitive skeletal fixation, tendon repair and CMC fusion. A good hand function could still be restored with timely and planned secondary interventions (Figure 4). 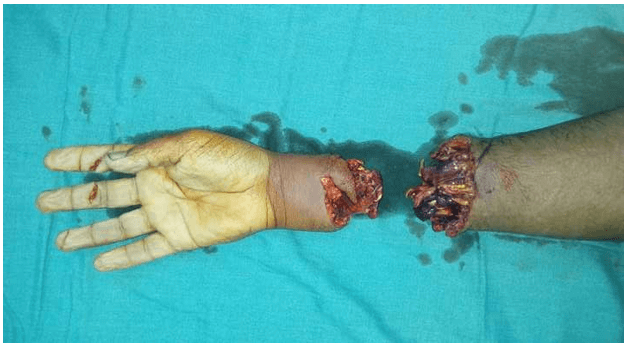 Figure 3: Patient with an amputation of his right forearm. The injuries over the index and long finger volar aspect can be appreciated. The hand was successful replanted. 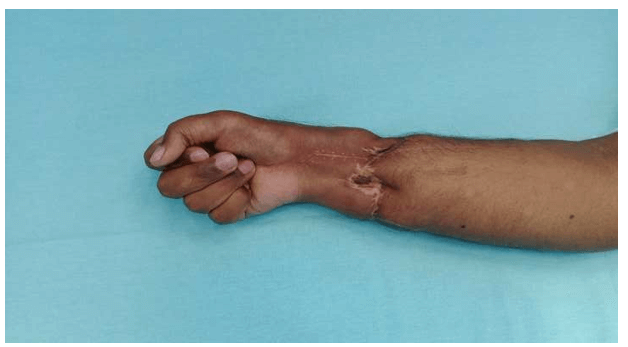 Figure 4: Follow up a picture of the patient in figure 3 showing the recovery of useful function. However, as the primary repair of important tendons could not be achieved, he had to undergo multiple secondary procedures to reach this level of function.

All five patients had an injury with a saw. Average ischaemia time from injury to reperfusion was 7 hours and included warm and cold ischaemia time. All the replanted parts survived without any immediate concerns. Two patients needed skin graft for wound closure. The average follow-up period was 38 months (30-48 months).

The average total active motion in fingers at the final follow up was 212°; the average 2PD was around 9 mm. All patients could use their hand for activities of daily living, and modified ADLS score was six while the average DASH score was 25.3 (Table 1). These patients expressed satisfaction about the procedure and had been back to meaningful employment while none of them had significant chronic pain. All were willing to undergo a similar procedure in future if such a need arises.

Indications for replantation have evolved since replantation became a reality. Many severe and avulsion type of injuries, including amputation through critical areas (zone 2 amputation of a single digit) are now considered as relative contraindications due to their functional implications. Replantation of major parts is still favoured, considering the functional improvement they potentially provide. Thus, the functional outcome and not mere survival has become the primary determinant of success in replantation surgery [6, 7]. The functional restoration of major replants has multiple implications ranging from ischaemia time, surgery, and rehabilitation. Patient motivation can also influence the outcome.

Unlike digital replants, early transfer of these patients with major amputations to the microsurgical facilities is essential. The most critical determinant of survival and the muscle function is ischaemia time. Ischaemia time is especially crucial for more proximal level amputations with more substantial muscle mass involvement. Nevertheless, in this series, we noticed that the number of secondary procedures needed to restore useful function was proportional to the ischaemia time. The only patient reaching the hospital within an hour of injury recovered intrinsic muscle function. CMCJ arthrodesis, tendon transfers and claw corrections were needed in other patients due to loss of intrinsic muscle function.

The type of injury and amputation level also has implications on the possibility of replantation as well as the function. Among macro-replantations, the wrist and hand level are thought to have better outcome compared to more proximal amputations [10]. While we did not have a very proximal level amputation, the only wrist level amputation (bone level) in this series that could not be replanted had degloving of skin and soft tissues from the mid-arm levels, precluding its reattachment [11]. In avulsion type of injury as in the case above, getting suitable healthy vessel and the microcirculation within the skin is always tricky. Fortunately, all wrist level injuries were relatively sharp cuts with the saw, thus repairing structures was technically easier. One patient with forearm level amputation had minimal degloving as well as multilevel injury and needed secondary reconstruction of his tendons.

Adequate shortening of proximal and distal parts helps to prevent the need for additional soft tissue cover. The shortening should always be performed away from a critical joint. A procedure like proximal row carpectomy can help retain the functionally important wrist joint. At times when shortening is not possible, one should be prepared for emergency soft tissue cover, to preserve functionally important joints and protect the exposed vital structures.

Rigid skeletal fixation is pre-requisite for early mobilization. Care to avoid transfixing the joints, and the tendons can help improve the outcome. Fixation with k wires can be augmented by an external fixator to optimize the stability. With both flexor and extensor tendon repairs, all patients had an extension block splint with gentle flexion of the digits that additionally supported the fractures. Gentle early motion within the slab was started on day three following surgery and was continued for six weeks. It was followed by another four weeks of active mobilization without a splint. Muscle-strengthening was started after ten weeks. Four strands modified Kessler repair with 4’0 PDS was used for tendons. Early motion is critical in achieving a better functional outcome and should be encouraged [12].

The mean follow-up period was 38 months. Active motion that was 80% of the healthy opposite side could be achieved in these patients while the two-point discrimination was 8 to 10 mm. Multiple other authors have reported similar success rates [13, 14]. The DASH score indicated that patients could achieve reasonable functional independence. The activities most patients found difficulty doing required intrinsic muscle function, that was poor in all but the first patient.

Reports about secondary surgeries following replantation of major parts are also frequent [6, 15, 16]. Avoiding trans-fixation of the tendons and joints, early removal of hardware, and early motion can help reduce the number of secondary interventions [15, 17]. Timing of secondary interventions is also critical, any bone nonunion should be addressed early, while adequate time should be allowed for tissue equilibrium before undertaking tenolysis. Further interventions like CMC fusion, web deepening or claw correction should be decided when patient is using the hand and finds specific limitations. The available motors as well as scarred tissues and repaired neurovascular structures can pose difficulties in choice and execution of suitable options. In-spite of early motion, tenolysis was needed in 4 of the five patients. Secondary interventions were also needed to stabilize CMC joints (2) and claw correction (1) to address the loss of intrinsic muscle function. In the patient with forearm replantation, there was a second level injury. He had multiple secondary interventions. Primary repair of tendons could have helped us reduce a few of his secondary surgeries.

Functional analysis of a replanted extremity involves the assessment of the range of motion, stiffness, sensations, freedom from pain, and finally the appearance [16]. Various assessment scores objectively assess the hand functions based on ability and ease to perform day-to-day activities. DASH score is one such score that was used in this study [18].

Patients own subjective feeling about the replanted limb plays an essential role in meaningful vocational rehabilitation and can be a cause of the unfavourable outcome [19]. These patients need intensive physical therapy following replantation and possibly multiple secondary surgeries over the protracted phase of rehabilitation. They should be counselled about it before the surgery as well as in the post-operative period. All patients in our series, fortunately, were worksite injuries and were eager to get back to work as early as possible.

A few limitations of this study were its retrospective nature and inability to bring in the patients for final assessment due to COVID-19. Still, it provided us with meaningful insights about the overall results and functional implications of various factors.

All the authors have contributed towards, planning and execution of the case and have helped in preparing this manuscript.

© 2021 Rahul K. Patil. This is an open-access article distributed under the terms of the Creative Commons Attribution License, which permits unrestricted use, distribution, and reproduction in any medium, provided the original author and source are credited. Hosting by Science Repository. All rights reserved.
DOI: 10.31487/j.SCR.2020.12.25

Figure 1: Amputation of the right hand at the level of the wrist, essential structures have been identified and tagged with sutures separately. Direct crushing of structures with hemostat should be avoided. The proximal part is being prepared.

Figure 2: The hand function after three years following replantation. The function of the long flexors as well as reasonably maintained thenar eminence suggesting intrinsic recovery can be appreciated.

Figure 3: Patient with an amputation of his right forearm. The injuries over the index and long finger volar aspect can be appreciated. The hand was successful replanted.

Figure 4: Follow up a picture of the patient in figure 3 showing the recovery of useful function. However, as the primary repair of important tendons could not be achieved, he had to undergo multiple secondary procedures to reach this level of function.