Although intra-abdominal accessory spleens are commonly found in 10-30% of the general population, epidermoid cyst within an intrapancreatic accessory spleen (ECIPAS) is an extremely rare entity and is often misdiagnosed preoperatively as a cystic malignancy. We present the case of a 51-year-old man who was referred to our clinic because of an incidentally found pancreatic tail cystic mass. Due to CA 19-9 level over 2000 and high suspicion of malignancy, the patient underwent distal pancreatectomy with splenectomy. Histopathological analysis revealed a squamous epithelial lining with splenic parenchyma within the cyst wall, which was consistent with ECIPAS. The patient was discharged on postoperative day 4 without any complication. As this disease may mimic malignancy with no characteristic features in preoperative imaging, it should be considered in the differential diagnosis of pancreatic cystic lesions.

Accessory spleens (AS) are ectopic masses comprised of splenic tissue found incidentally in 10-30% of the population[1]. The splenic hilum and pancreatic tail are the two most common sites of AS. Other rare sites include stomach, greater omentum, retroperitoneum and pelvis. An epidermoid cyst in an intrapancreatic accessory spleen (ECIPAS) is a non-malignant true cyst within the pancreas lined with squamous epithelium and surrounding parenchyma showing histologic characteristics of AS. The first report of ECIPAS was published by Davidson et al. in 1980 [2]. The diagnostic challenge of this disease is differentiating it from other pancreatic cystic lesions, some of which contain adenocarcinoma. In recent years, due to the advanced diagnostic imaging techniques, increased number of ECIPASs are being reported [3]. However, the true prevalence of ECIPAS remains unknown due to its rarity. Herein, we report a case of ECIPAS diagnosed post-operatively in a 51-year-old male.

A 51-year-old man was referred to our clinic because of an incidentally found pancreatic tail mass. He initially was admitted to another center with pain and swelling in his left testis, which resolved after a course of antibiotics. Due to the right-sided hydronephrosis revealed by an ultrasonographic examination of the kidneys, the patient underwent an abdominal CT scan to rule out kidney stones. He had no past medical history, and physical examination was unrevealing. The patient reported no other symptoms, including abdominal pain, diarrhea, constipation, weight loss, nausea, or vomiting.

Contrast-enhanced abdominal CT scan showed an 1111 cm unilocular cyst with a thick, mildly enhancing rim in the pancreatic tail (Figure 1). Splenic vein compression was noted, but there was no vascular invasion or lymphadenopathy. Furthermore, no communication between the cyst and the main pancreatic duct was seen. The laboratory work-up was unremarkable, except for a CA 19-9 over 2000.

Mucinous cystic neoplasm, cystic pancreatic neuroendocrine tumor, IPMN and solid pseudopapillary tumor were in the differential diagnosis. Based on the imaging characteristics and the elevated CA 19-9, mucinous cystic neoplasm was highly suspected, despite the low incidence of this type of lesion in men. Following a diagnostic laparoscopy to rule out evidence of small-volume intraperitoneal metastatic disease, a laparoscopically assisted distal pancreatectomy with splenectomy was performed. Due to the large size of the cyst and its adherence to the adjacent organs and the retroperitoneum, we additionally performed partial left adrenalectomy and segmental left hemicolectomy. 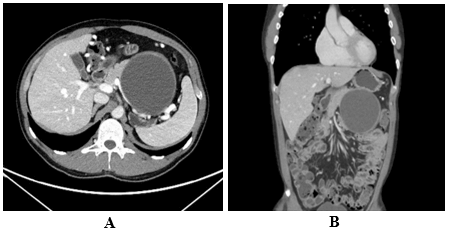 Figure 2: Macroscopic image of the epidermoid cyst in an intrapancreatic accessory spleen (ECIPAS), A) large smooth mass in the tail of the pancreas with adjacent spleen and the normal spleen. B) thick, fibrotic cyst wall with grungy, yellow-brown contents.

Postoperatively, the patient was managed according to our standard enhanced recovery after surgery (ERAS) pathway and after 4 uneventful days, he was discharged home. No complications were noted up to 3 months postoperatively. Macroscopic examination of the 10.19.57.8 cm tumor revealed a thick (0.6 cm) fibrotic wall (Figure 2). The cyst contained thin brown fluid with no further loculations or distinct masses on the inner surface. On microscopy, the cyst was lined by mixed cuboidal and multilayer epithelium that was positive for squamous (CK5 and P40) and mesothelial (podoplanin) markers (Figures 3 & 4). Within the cyst wall, splenic parenchyma composed of lymphoid tissue intermixed with red cells and vasculature was evident (Figure 3). These findings were consistent with a definitive diagnosis of ECIPAS. 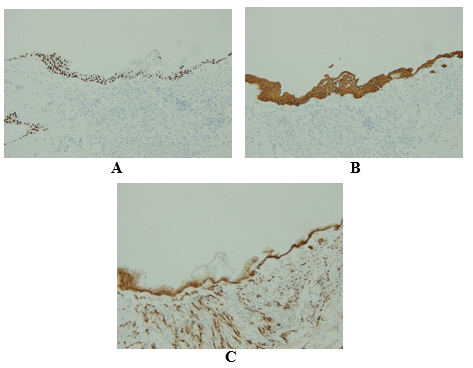 Due to its rarity, the exact histopathologic origin of this cyst has been a source of debate. Protrusion of the pancreatic ducts into an accessory spleen located in the pancreatic tail is one of the proposed theories [6-8]. Furthermore, for epidermoid cysts of the spleen, it has been suggested that inclusion cysts develop from mesothelial cells of the splenic parenchyma and undergo squamous metaplasia, leading to expression of CEA and CA 19-9. In contrast, analyzing the cytokeratin pattern of epidermoid cysts of the spleen, Lifschitz-Mercer et al. proposed a teratomatous origin, which derives from inclusion of fetal squamous epithelial tissue [9].

The importance of this benign yet clinically challenging disease lies in the fact that in most cases, as in ours, CA 19-9 is elevated [10-12]. High CA 19-9 without pathognomonic imaging features makes preoperative differentiation between the ECIPAS and a malignancy exceptionally difficult. Consequently, few cases have been diagnosed pre-operatively [13]. Hu et al. suggested that ECIPAS should be considered if the cystic wall and spleen show similar contrast enhancement during multiphasic scans [3]. However, given the limited available data on ECIPAS, surgical resection remains the only option for definitive diagnosis.

© 2019 Venu G Pillarisetty . This is an open-access article distributed under the terms of the Creative Commons Attribution License, which permits unrestricted use, distribution, and reproduction in any medium, provided the original author and source are credited. Hosting by Science Repository. All rights reserved.
DOI: 10.31487/j.SCR.2020.01.07

Figure 2: Macroscopic image of the epidermoid cyst in an intrapancreatic accessory spleen (ECIPAS), A) large smooth mass in the tail of the pancreas with adjacent spleen and the normal spleen. B) thick, fibrotic cyst wall with grungy, yellow-brown contents.