Background: Large hepatic artery aneurysms are rare, especially spontaneous ones without history of hepatopancreatobiliary surgery or trauma. They are serious and need attention due to risk of spontaneous rupture. Management depends on local expertise with endovascular management being the preferred option, and surgical repair usually reserved to ruptured aneurysms in hemodynamically unstable patients.
Methods: A 54-year-old female patient was referred to our hospital for treatment of incidentally discovered large hepatic artery aneurysm without obvious etiology. The decision was made to attempt percutaneous endovascular management at the interventional radiology unit.
Result: The aneurysm sac was successfully excluded using covered stents. This was complicated by right hepatic artery occlusion and clinically insignificant contrast extravasation. These complications did not have any clinical sequel in terms of hemodynamic stability or impaired liver function. The patient was safely discharged few days after the procedure.
Conclusion: Endovascular management of spontaneous large hepatic artery aneurysms is effective. Potential complications include hepatic artery occlusion and dissection, which may or may not have serious clinical consequences. This offers a less invasive treatment option compared to surgery.

Large visceral aneurysms are rare, hepatic artery aneurysms constitute up to 50% of them. Treatment is usually indicated when the size exceeds 2 cm due to increasing risk of rupture and hemorrhage. Surgery poses significant mortality up to 3%, thus endovascular management should be attempted whenever the expertise is available [1]. Stenting is thought to be the best first option, but coiling has also been successful [1-5].

A 54-year-old female patient presented with symptoms of severe gastroesophageal reflux and gastric outlet obstruction. She had a history of gastric banding 15 years ago. Her past surgical history also included abdominoplasty and breast reduction. The gastric band was laparoscopically removed at another hospital to relieve her presenting symptoms. The postoperative CT scan showed a large aneurysm (7.6 x 5.6 cm, with mural thrombus and opacification of 4.0 x 2.7 cm) arising from the hepatic artery (Figure 1). She was hemodynamically stable with no signs of active bleeding or abdominal pain. She was transferred to our hospital for further management. The decision was to attempt endovascular management, with the operating theatre being on standby. Informed written consent was obtained for the procedure. Vascular access was obtained via the Right Common Femoral artery. Long 6-French sheath (Ansel, Cook Medical, Bloomington, IN, USA) was placed in the aorta to ensure stability. Superior Mesenteric artery (SMA) angiogram demonstrated a patent portal vein with no filling of the aneurysm via gastroduodenal – inferior pancreaticoduodenal arcade (Figure 2). 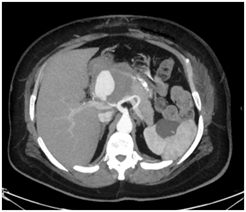 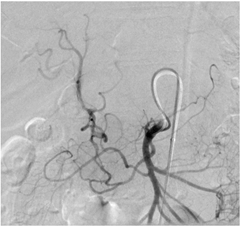 Coeliac angiogram showed the large aneurysm to be arising from the Hepatic artery (HA) opposite the GDA origin (Figures 3A & 3B). Following the principle of backdoor embolization and to reduce the risk of an endoleak, the GDA was catheterized and embolized with 0.018” pushable coils measuring 4 mm x 4 cm and 6 mm x 6 cm (Boston Scientific, San Leandro, CA, USA) (Figures 4A & 4B). The segment of the HA at the level of the aneurysm was mildly stenotic and irregular. Microcatheter (2.7-French, Terumo, Tokyo, Japan) was advanced into the hepatic artery distal to the aneurysm and angiography demonstrated conventional bifurcation of the proper hepatic artery into right and left hepatic arteries (RHA and LHA). The length of the abnormal segment of the HA was 28 mm, with a maximum diameter of 4 mm proximal to the aneurysm, and 3 mm at the level of the aneurysm. A BeGraft balloon-mounted covered stent measuring 4 x 28 mm (Bentley InnoMed GmbH, Hechingen, Germany) was deployed with its distal end at the HA bifurcation. Post-deployment angiogram revealed persistent filling of the aneurysm with occlusion of the stent and the RHA, but patent LHA (Figure 5). 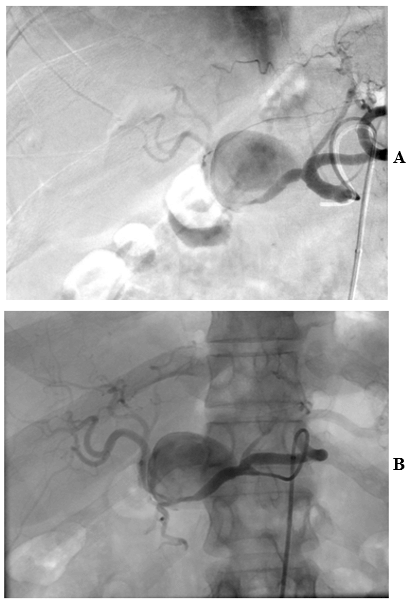 Figure 3: Celiac A) DSA-PA and B) unsubtracted angiogram showing the large aneurysm to be arising from the hepatic artery opposite the gastroduodenal artery origin. 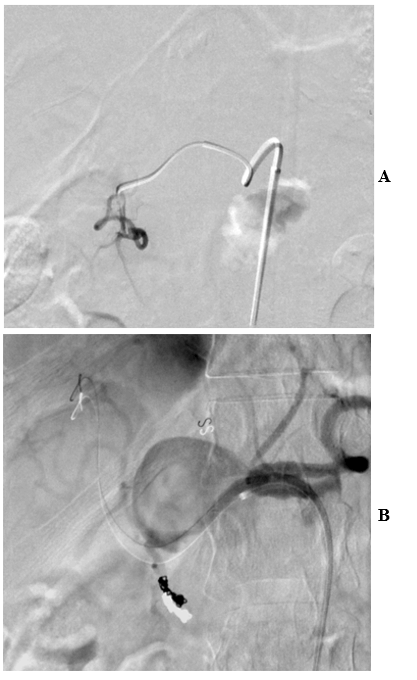 Figure 4: A) DSA-PA with microcatheter inside Gastroduodenal artery (GDA) just before its coiling. B) Celiac DSA-PA after GDA coiling showing its effective occlusion following principle of backdoor embolization. 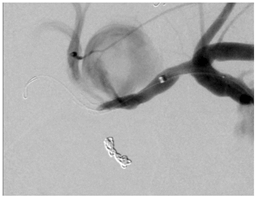 Figure 5: DSA-PA after deployment of the first stent revealed persistent filling of the aneurysm with occlusion of the RHA but patent LHA.

RHA angioplasty was attempted but lead to contrast extravasation (Figure 6). Therefore, no further recanalization was attempted. Another overlapping shorter BeGraft stent measuring 4 x 18 mm (Bentley InnoMed GmbH, Hechingen, Germany) was deployed to extend the stent coverage proximally. Subsequent angiogram demonstrated slow filling of the aneurysm. The proximal end of the stent was further dilated using 5mm balloon (Cordis Endovascular, Miami Lakes, FL). This achieved proper sealing and total exclusion of the aneurysm sac with no further filling on subsequent angiography (Figure 7). After discussion with the surgical team, the recommendation was to commence antiplatelet therapy the next morning and admitting the patient to the High Dependency Unit to monitor for bleeding and manifestations of hepatic ischaemia. The patient had uneventful postoperative recovery with no derangement of her liver functions and her overall clinical condition remained stable. A follow-up biphasic contrast-enhanced CT scan was performed four days later, revealing successful total exclusion of the aneurysm with no contrast filling. It also showed absence of any hepatic perfusion abnormality with normal homogeneous enhancement of the liver parenchyma (Figure 8). The patient was discharged from the hospital 6 days after the operation on Aspirin 75 mg oral tablet QD and advised to attend outpatient liver clinic for follow-up. 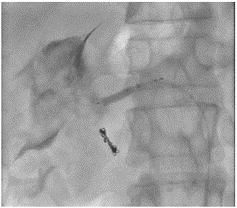 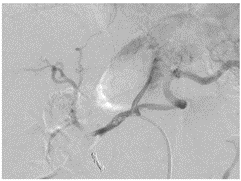 Figure 7: DSA-PA after deploying the second stent and re-ballooning the proximal end, showing successful total exclusion of the aneurysm sac with no further filling. 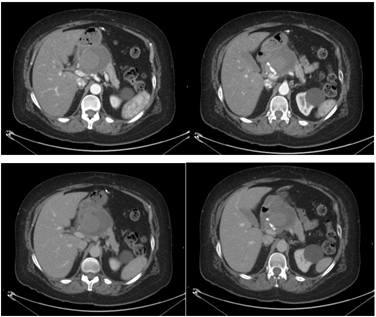 Several case reports showed that endovascular management of large visceral aneurysms (including hepatic artery) is effective. This offers a less invasive treatment option compared to surgery with its relatively high mortality and morbidity. We recommend attempting endovascular management for similar cases as a first line of treatment, especially for patients at higher risk of surgery. Nevertheless, surgical backup is priceless in such cases. The interventional radiologist and the surgeon should engage in team work to decide the best modality for each patient. Potential complications of endovascular management include hepatic artery or stent occlusion, which may not have serious clinical consequences especially if the patient has no underlying liver disease. Continuous heparinized saline infusion via the coaxial catheter system is recommended to reduce risk of thromboembolic complications, similar to the standards followed in interventional neuroradiology. Postoperative single antiplatelet therapy after stenting is also thought to maintain stent patency. Larger case series and comparative studies are recommended to provide high quality evidence regarding safety and effectiveness of endovascular management compared to surgery.

© 2021 Praveen Peddu. This is an open-access article distributed under the terms of the Creative Commons Attribution License, which permits unrestricted use, distribution, and reproduction in any medium, provided the original author and source are credited. Hosting by Science Repository. All rights reserved.
DOI: 10.31487/j.SCR.2020.12.12

Figure 3: Celiac A) DSA-PA and B) unsubtracted angiogram showing the large aneurysm to be arising from the hepatic artery opposite the gastroduodenal artery origin.

Figure 4: A) DSA-PA with microcatheter inside Gastroduodenal artery (GDA) just before its coiling. B) Celiac DSA-PA after GDA coiling showing its effective occlusion following principle of backdoor embolization.

Figure 5: DSA-PA after deployment of the first stent revealed persistent filling of the aneurysm with occlusion of the RHA but patent LHA.

Figure 7: DSA-PA after deploying the second stent and re-ballooning the proximal end, showing successful total exclusion of the aneurysm sac with no further filling.