Encephalocele is less common than other neural tube defects. This report details a bilateral frontal meningoencephalocele that presented at a later than usual age with tonic-clonic seizure and cerebral spinal fluid (CSF) rhinorrhea of a 65-year-old female, a known case of hypertension, and controlled epilepsy.

Encephalocele is a neural tube defect that occurs when a sac-like protrusion containing brain tissue, meninges, and cerebrospinal fluid forms beyond the cranial boundaries and is referred to as meningocele and meningoencephalocele, respectively [1, 2]. This defect is due to the incomplete separation of the ectoderm from the neuroectoderm surface following the closure of the neural fold during embryonic life [3].

As rare congenital defects, encephaloceles affect about 1 in 35,000 pregnancies worldwide, with a distinct geographic variation as it occurs six times more frequently in Southern Asia (1 in 6000) [4, 5]. However, some cases are acquired secondary to malignancies, traumas, and post-surgical iatrogenic injuries [6]. Patients who are undiagnosed at birth can present later with nasal obstruction, headache, rhinorrhea, and brain abscess [7, 8].

Here we report a case of bilateral frontal meningoencephalocele that presented at a later than usual age with tonic-clonic seizure and cerebral spinal fluid (CSF) rhinorrhea to the departments of neurology and otorhinolaryngology of our center.

I Facts and Assumptions

A 65-year-old female with a known case of hypertension. She has been following up with the neurology department as a case of epilepsy for 7 years. For three years, the patient's epilepsy was controlled with phenytoin 100 mg and Keppra 500 mg twice daily. She was referred to the otorhinolaryngology department for on-off left ear tinnitus for the last 3 years, with on-off episodes of runny nose and postnasal drip. No history of fever, headache, neck pain, nasal obstruction, facial pain, or epistaxis. There is no relevant prior medical or surgical history. The patient had a history of head trauma 12 years ago. She denied any history of back trauma, change in mental status, or loss of consciousness.

An audiology assessment was conducted, and the patient was diagnosed as a case of non-pulsatile tinnitus and mild high-frequency sensorineural hearing loss. The patient was noticed to have bilateral clear watery rhinorrhea, which had been a chronic and recurring problem for the previous 5 years. It was more in the right nostril and increased with bending and leaning forward, with postnasal drip and hyposmia, with no other associated symptoms other than the above-mentioned symptoms. Further investigations were carried out to detect the source of what was suspected to be a cerebral spinal fluid (CSF) leak. Upon anterior rhinoscopy, bilateral hypertrophy of the inferior turbinate was seen with clear fluid leakage. The fluid was collected for Beta-2-transferrin testing, which was positive.

Brain MRI showed no acute intracranial abnormalities but there were focal encephalomalacia changes in the left gyrus rectus, which is attributable to sequela of remote trauma. In addition, fluid signals in the bifrontal, anterior ethmoid, and maxillary sinuses, which could be related to CSF rhinorrhea, and lab correlation were recommended (Figure 1). The boney defect in the frontal sinuses was best appreciated in the CT navigation study, and there were no obvious features of brain herniation. 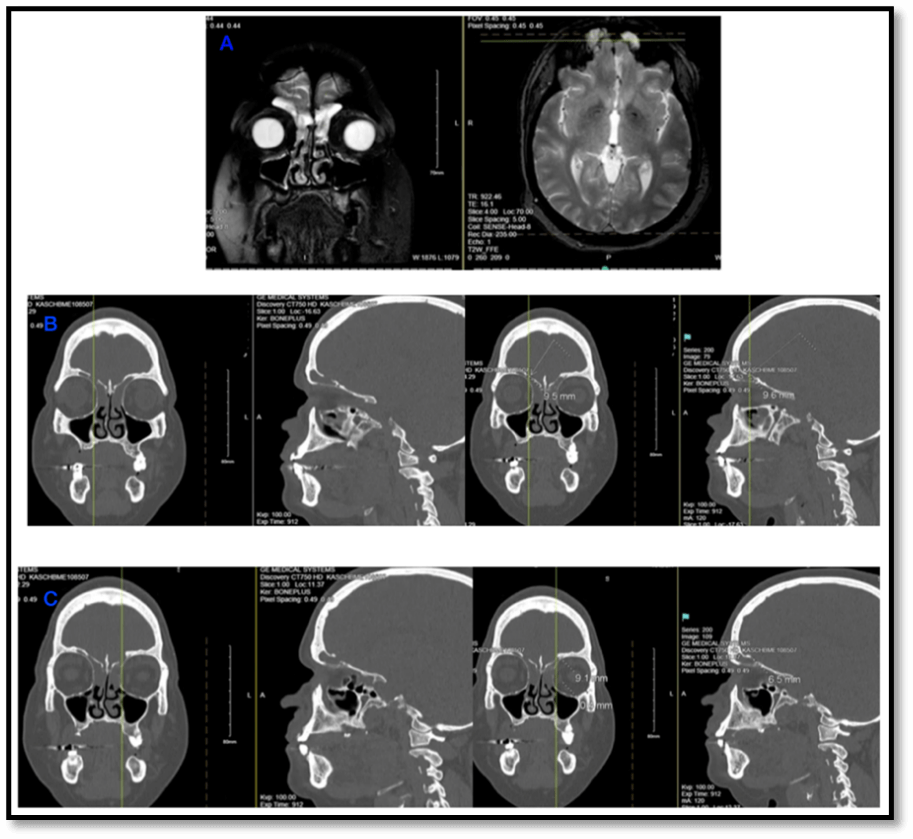 Nasal sputum deviation to the right was noted. Orbits, mastoid cells, and the nasopharynx appeared unremarkable. There was no obvious intracranial collection or lesion in both frontal lobes related to the bone defect in the frontal sinuses with complete opacification of the frontal sinuses. The treatment approach was based on functional endoscopic sinus surgery using navigation for bilateral frontal meningoencephalocele excision with repair of the cerebrospinal fluid (CSF) leak area (Figure 2) without any open surgical access. Bilateral large 2-4 mm defects were seen in the posterior interval of the frontal sinus on both sides with no active CSF leakage. A minimal area of dura was seen, which was cauterized via bipolar and put back, shrinking in place.

After lesion resection, the defect was closed using tutoplast. Overly flap was created using tutoplast and covered with SURGICEL and TISSEEL 4 mL glue. Bilateral nasal packing of merocel in glove fingers were used and the patient was successfully extubated with no complications. The excised part was sent for histopathological examination, which confirmed the diagnosis of meningoencephalocele with chronic inflammation of both right and left frontal mass (Figure 3).

Postoperatively, the patient was admitted for observation and seen by a neurology department, who advised against the measurement of intracranial pressure (ICP) and lumbar drainage, as there were no signs and symptoms of elevated ICP. Acetzlomids 500 mg BID was prescribed for a period of two months. On the fourth postoperative day, the patient had her nasal packing removed and she was fit for discharge. She was instructed to observe for clear rhinorrhea, CSF leak precautions, and emergency visit instructions were given. A follow-up exam was conducted at one month, three months, six months, and one-year intervals, and the patient was doing well with no episodes of rhinorrhea. Seizure attacks were noted to be disappeared after 3 months of the surgery.

Congenital encephalocele is the most common encephalocele entity, which is in majority of cases diagnosed and treated in the first few years of life [8, 9]. With a prevalence of 1 in 35,000 pregnancies worldwide and between 0.8 and 4 cases per 10,000 live births in Southeast Asian countries, it is more prevalent in females and those who were born with birthweight <2500 gram [2, 10].

Although the first reported case of encephalocele was in the 16th century, the pathognomonic of encephalocele is still unclear. Several genetic, maternal, and environmental factors have been implicated in its pathogenesis, such as folic acid deficiency, maternal exposure to environmental hazards, hypothyroidism during pregnancy, cytomegalovirus, and toxoplasma infection. Since encephaloceles are caused by neural tube insufficiency in embryos, numerous ocular and craniofacial abnormalities can occur as associated anomalies, such as hypertelorism and cleft lip and palate [11].

Adult encephalocele is a much rarer entity. It is secondary (acquired) encephalocele in the majority of cases, as a consequence of malignancies, head traumas, iatrogenic injuries, hydrocephalus, infections of adjacent sinuses, bacteremia, and pyogenic infections from distant body areas [11, 12]. Encephalocele is linked to recurrent meningoencephalitis [13]. Spontaneous cerebrospinal rhinorrhea is the most common reported complaint in adults' primary and secondary encephalocele. Focal and generalized tonic-clonic seizure is another reported presentation, especially in the case of drug-resistant seizures [11, 14]. Moreover, disruption of brain integrity with meningeal herniation can result in neurological disabilities, hydrocephalus, and high intracranial pressure signs and symptoms [12].

Our patient is a case of bilateral frontal meningeal encephalocele, that presented for the first time at the age of 65 years old. Based on the history of having old head trauma 12 years before the presentation, it is mostly acquired. She came to the ENT clinic with CSF leak rhinorrhea that increased with bending and leaning forward, besides postnasal drip and hyposmia. Having these symptoms had raised the suspicion of an implicated medical issue that could link her presenting complaints to her history of on-off seizure attacks that were not associated with headaches, ophthalmologic symptoms, or any other symptoms of focality. Sinus CT Navigation, in addition to high clinical suspicion, has become the cornerstone of meningoencephalocele diagnosis.

The selection of the most appropriate surgical technique is based on many important factors, including the size and location of the encephalocele, available equipment, and surgeons' expertise and skill. Elective open surgical repair of encephalocele is the treatment of choice in most centers. The procedure is often long, therefore blood loss and hypothermia are the most significant intraoperative complications. However, the endoscopic surgical approach has been shown to have a lower risk of perioperative mortality than open surgery, with a prevalence of 0% in endoscopic compared to 1.4 % in open surgery. In addition, postoperative complications such as meningitis, wound infections, and sepsis are much lower with the endoscopic surgical approach, with no difference in the rate of success between the two methods [15].

In our case, the patient was prepared for functional endoscopic surgery with navigation for CSF leak repair, without open surgical access. Endoscopic sinus surgery was done with no delay, soon after the diagnosis was made. The patient had an uneventful recovery and was discharged 4 days after surgery. During the follow-up programme, the patient appeared to be doing well and symptoms were relieved. Seizure attacks were noted to be discontinued 3 months after the operation.

Detecting encephalocele in adults can be very challenging and require high clinical suspicion. The open surgical approach is used to be the treatment of choice, despite the lower mortality and morbidity rates associated with the pure endoscopic approach. In our case, we report a successful endoscopic sinus surgical repair for a 65-year-old female with bilateral frontal meningoencephalocele.

© 2021 Abdullah Saud Arafat. This is an open-access article distributed under the terms of the Creative Commons Attribution License, which permits unrestricted use, distribution, and reproduction in any medium, provided the original author and source are credited. Hosting by Science Repository.
DOI: 10.31487/j.SCR.2022.08.05