Dysphagia Lusoria is a condition illustrated by difficulty in swallowing secondary to an aberrant right subclavian artery arising from the distal aortic arch and progressing posteriorly to the esophagus. The course of the artery forms a band that narrows the mid-esophagus. We present a case of a patient with a history of dysphagia and a presumed diagnosis of an esophageal stricture based on a barium swallow study. She was undergoing repeated balloon dilations of the “esophageal narrowing” without symptom relief. The patient sought a second opinion in thoracic surgery. A pulsatile band along the posterior esophagus was noted on endoscopy. Subsequently, a CT angiography confirmed the diagnosis of an aberrant right subclavian artery and surgical repair with a right subclavian and carotid bypass was performed. Afterwards, the patient’s dysphagia was still resolved, and at one year follow up the patient remained symptom free. In today’s age of frequent endoscopic intervention, uncommon etiologies for dysphagia should be considered in the differential diagnosis. If a pulsatile band along the mid-posterior esophagus is noted on endoscopy, an aberrant right subclavian artery should be in the differential. In this situation, surgical intervention and not an endoscopic procedure is the definitive treatment.

Dysphagia Lusoria is characterized by difficulty in swallowing due to an aberrant right subclavian artery that originates from the distal aortic arch and courses posteriorly to the esophagus [1]. Attributable to a flaw in embryological development, it can cause posterior indentation of the mid-esophagus, but is usually asymptomatic and thus, a very rare cause of dysphagia [2, 3]. In this era of aggressive endoscopic interventions, it is important that clinicians be aware of this aberrancy of embryological development as it can be misdiagnosed as an esophageal stricture. If this vascular structure is biopsied, stented or forcibly dilated, it can rupture with potentially fatal consequences.

In this case, a 37-year-old had undergone two years of serial balloon dilations for a presumed mid-esophageal stricture with little relief of her symptoms. She was offered stenting by her local gastroenterologist and sought a second opinion with thoracic surgery at a quaternary care center. Her history was not significant for reflux disease, and she was not able to tolerate esophageal manometry. The barium swallow confirmed the narrowing, and she underwent an upper endoscopy that showed a focal, pulsatile band along the entire posterior aspect of the esophagus at 22 cm from the incisors (Figure 1). The indented esophageal wall appeared hyper vascular. The diagnosis of partial compression due to an aberrant right subclavian artery was confirmed on CT angiogram (Figures 2 & 3). The patient was referred to cardiovascular surgery and underwent definitive repair with a right subclavian to carotid bypass via a supraclavicular approach [4]. At one year follow up, her dysphagia remains resolved and she continues to have a strong right radial pulse. 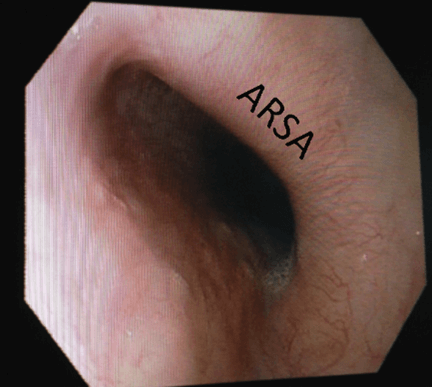 Figure 1: The aberrant right subclavian artery (ARSA) seen on upper endoscopy at 22cm from the incisors. 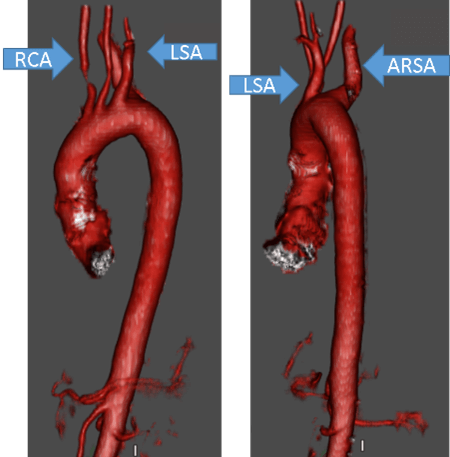 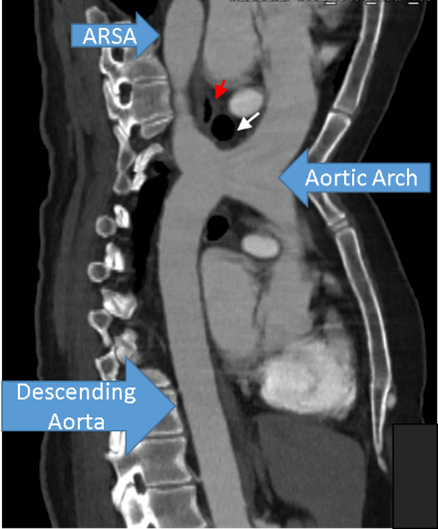 Figure 3: A composite image of the thoracic aorta showing compression of the mid-esophagus (red arrow) between the trachea (white arrow) and the aberrant right subclavian artery (ARSA). The aortic arch and descending thoracic aorta are also identified. 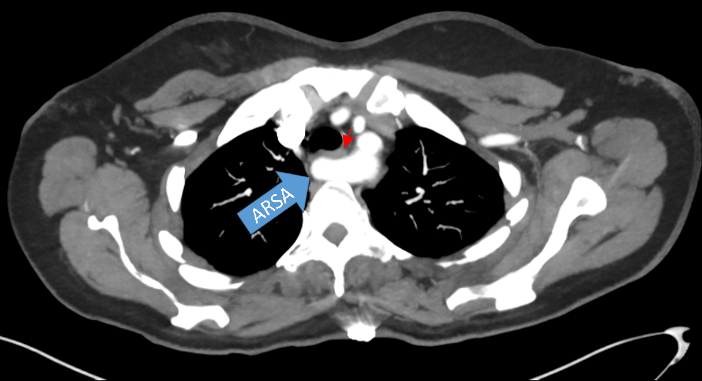 All authors on this manuscript approve it for submission.

© 2021 Jeffrey Javidfar. This is an open-access article distributed under the terms of the Creative Commons Attribution License, which permits unrestricted use, distribution, and reproduction in any medium, provided the original author and source are credited. Hosting by Science Repository. All rights reserved.
DOI: 10.31487/j.SCR.2021.08.19

Figure 1: The aberrant right subclavian artery (ARSA) seen on upper endoscopy at 22cm from the incisors.

Figure 3: A composite image of the thoracic aorta showing compression of the mid-esophagus (red arrow) between the trachea (white arrow) and the aberrant right subclavian artery (ARSA). The aortic arch and descending thoracic aorta are also identified.