Cryptococcal Pneumonia in a Pediatric Patient with Renal Transplantation

Cryptococcosis is a significant opportunistic infection in solid organ transplant recipients. Patients may have asymptomatic colonization or symptoms of isolated pulmonary disease and severe pneumonia. The disease is diagnosed by culture, direct microscopy or detection of cryptococcal antigen in the body fluid or tissues. We herein present a C. neoformans pneumonia in a renal transplant patient. An 18-year-old male, renal transplanted from his mother, admitted to hospital due to increase in creatinine. On physical examination, there was no finding other than hypertension and operation scar. Urea and creatinine were increased. Renal doppler USG revealed increased renal parenchymal echogenicity. Immunosuppressive drug levels were in normal range. Renal biopsy was consistent with acute cellular rejection and treatment was started. Fever appeared on the following week. Immunosuppressants doses were reduced; antibiotics started empirically. HRCT revealed multiple nodules, lymphadenopathies and pleural effusion. C. neoformans was detected in blood culture. Detailed history revealed the patient was pigeon feeder. Amphotericin B and fluconazole was started. On follow up BPAP was needed owing respiratory distress. Blood culture became negative on the 13th day of treatment. The treatment of the patient was completed in six weeks and followed by prophylaxis. The patient is now being followed up at baseline creatinine 1.73 mg / dl in the 1st year after discharge. We would like to remind that opportunistic fungal infections may also be the cause of fever in solid organ transplant patients. It should be noted these infections may result with high mortality without early diagnosis and appropriate treatment.

Cryptococcus neoformans (C. neoformans) is an encapsulated yeast fungus, and soil contaminated with various bird droppings, especially pigeons, is the most important source. C. neoformans is taken by inhalation and systemic spread occurs [1]. The frequency of C. neoformans, an important opportunistic infection factor in patients with solid organ transplantation, is 0.3% to 5.3% in this population. Lung involvement is present in 25-54% of patients, and the frequency of isolated pulmonary disease has been reported in the literature ranging from 6% to 33% [2]. In this article, a patient with renal transplantation who was followed up with the diagnosis of cryptococcal pneumonia after acute rejection treatment and treated successfully was mentioned.

An 18-year-old male patient, underwent renal transplantation from his mother six years ago, was hospitalized due to an increase in creatinine. It was learned from his history that the peritoneal dialysis program was started at the age of 6 due to vesicoureteral reflux (VUR), and renal transplantation performed at the age of 12. In physical examination, Blood pressure was 137/84 mmHg (stage 1), heart rate was 86/min and there were no features other than the operation scar in the abdomen. On hemogram analysis leukocyte count was 10790/µL and constitutes 50% neutrophil, hemoglobin was 10.2 g/dL and platelet count was 275,000/µL. The patient with a basal creatinine of 0.7 had an increase in urea and creatinine (Urea: 155 mg/dL, creatinine: 1.49 mg/dL). Serum electrolytes, liver enzymes and acute phase reactants were at normal values (Na: 135 mmol/L, K: 4.8 mmol/L, AST: 14U/L, ALT: 12U/L, sedimentation: 14mm/h, CRP: 0.14 mg / dL). Urine culture was negative. Cyclosporin drug level was in the normal range (Cyclosporin 0 hr: 147 ng / mL). CMV and BKV were found to be negative in the blood. Panel reactive antibody Class I was negative and Class II was positive (67%). In the kidney biopsy, C4d negative acute active cellular rejection was detected. Anti-thymocyte globulin (ATG) treatment was started by monitoring CD3 levels following 3 doses of pulse methylprednisolone. During this period, the patient's creatinine value increased from 1.49 mg/dL to 1.89 mg/dL.

The patient had a fever after 4 doses of ATG; but did not have any evidence of the source of the fever in his physical examination. Laboratory examination revealed pancytopenia (Leukocyte count: 3130/µL, Hb:7.5g/dL, platelet count: 88000/µL), elevated renal function tests (urea: 155 mg/dL, creatinine: 2.7 mg/dL) and slightly elevated acute phase reactants (sedimentation: 28 mm/s, CRP: 19 mg/dL). Viral serology, aspergillus antigen and gamma-interferon test for tuberculosis resulted as negative. On chest x-ray, bronchial thickening was present in the basal and perihilar regions. It was evaluated as interstitial lung disease. Vancomycin (40 mg/kg/day) and meropenem (60 mg/kg/day) treatments were started empirically. The immunosuppressive treatment doses he received were reduced. On the 4th day of treatment, blood culture was positive for C. neoformans and blood cryptococcal antigen resulted positively. When the story was deepened, it was learned that the patient fed pigeons at home. On chest tomography, there were nodules in lungs more commonly in upper lobes (Figure 1). 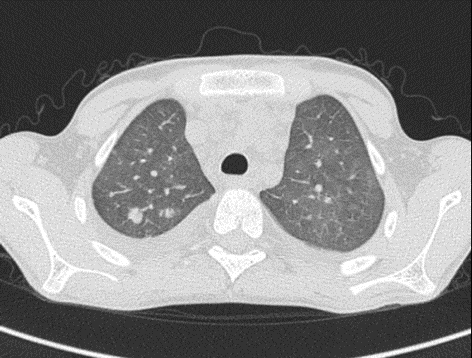 Some of the nodules showed cavitation. Septal thickening, diffuse lymphadenomegaly and pleural effusion were detected in the mediastinum. (Figure 2). The patient was recommended lumbar puncture to evaluate the presence of central nervous system involvement, However, the family did not give consent. Amphotericin B (5mg/kg/day) and fluconazole (12mg/kg/day) was started to the patient whom neurological examination was normal. The patient who developed respiratory distress and hypoxia on the 5th day of antifungal treatment was followed up in the intensive care unit with non-invasive mechanical ventilation support for 4 days. At the 11th day of antifungal therapy the patient had no need for oxygen. Blood culture was negative at the 13th day. The patient was followed up with dual antifungal therapy for four weeks in the follow-up, and the treatment was completed in six weeks. After that prophylaxis dose was started for 1 year. On the 43rd day of hospitalization he was discharged with urea was 77 mg/ dL and creatinine 1.7 mg/ dL. The patient is now followed up at baseline creatinine 1.73 mg/ dL in the first year after cryptococcal infection. 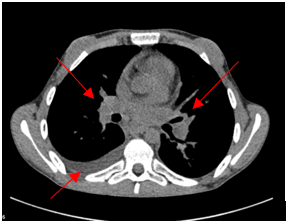 C. neoformans can cause central nervous system, lung, skin, soft tissue, osteoarticular involvement or disseminated infection. About 8% of fungal infections in patients with solid organ transplant recipients are invasive cryptococcal infections. C. neoformans causes extrapulmonary disease or central nervous system involvement with a rate of 50-75% (2,4). Approximately 25-54% of transplant recipients with cryptococcal infection have lung disease, and isolated lung involvement was found in 6-33% of patients [2]. In our patient, infections were considered at the forefront due to the newly developing fever after rejection therapy. Since the findings of interstitial lung disease were seen on the chest radiograph, empirical treatment was started, and immunosuppressive treatment doses were reduced by considering possible opportunistic viral and fungal infections.

The diagnosis of cryptococcal infection is typically made by cryptococcal antigen testing of serum or cerebrospinal fluid (CSF) or the culture or histopathology of infected tissues. The diagnosis of pulmonary cryptococcosis is based on the isolation of C. neoformans from a pulmonary sample. Sputum; the least invasive sample to isolate the causative agent; however, bronchoalveolar lavage (BAL) fluid can be obtained by performing bronchoscopy for diagnosis. The sensitivity of serum Cryptococcal antigen positivity is 93-100% and the specificity is 93-98% [1]. Our patient was diagnosed as a result of cryptococcal antigen positivity and concomitant positive blood culture. Due to the development of accompanying severe respiratory symptoms, the patient was considered to have cryptococcal-related pneumonia.

In cryptococcal infection, isolated pulmonary disease can be seen in a spectrum ranging from asymptomatic colonization or infection to non-specific radiological findings or severe pneumonia. Symptoms of pulmonary infection include cough, dyspnea, chest pain, solitary or multiple cavitary nodules, pleural effusion, and endobronchial lesions while rare symptoms are hypoxemia and severe sepsis [2, 4]. The first clinical finding in our patient was fever. The patient, who had non-specific radiological findings at the beginning, had angiocentric nodules and septal thickening on chest tomography taken after the onset of respiratory findings. In the follow-up, severe respiratory findings developed to the extent that the intensive care unit and non-invasive respiratory support were needed. The presence of increased cryptococcal antigen in the blood supports extrapulmonary involvement. It is stated that lumbar puncture should be performed to evaluate central nervous system spread in patients [1, 2]. In our case, the presence of central nervous system involvement could not be determined because the patient's family did not accept lumbar puncture. Therefore, the treatment of the patient was tailored assuming positive central nervous system involvement. As observed in our case, contact with bird manure can be the source of contamination [1]. Patients should be questioned in detail on this issue.

There are publications reporting patients with solid organ transplantation using calcineurin inhibitors are protected from CNS involvement and are presented with isolated lung involvement. It has also been reported that Tacrolimus and Cyclosporin A treatments have an in vitro antifungal effect. In addition, despite the high seroprevalence of cryptococcal antibodies in early childhood, the development of cryptococcal infection in transplant recipients is rarely observed. This suggests that the immunosuppressive agents used, may provide some degree of protection against Cryptococcus species. Considering that cryptococcosis develops in transplant recipients using calcineurin inhibitors, the immunosuppressive effect is dominant compared to the antifungal effect. Particularly noteworthy in patients taking tacrolimus, it has been shown to have a protective effect on mortality. It is not known whether this relationship is due to the antifungal properties of tacrolimus or to the host or other unmetered variables related to infection [6]. Our patient was receiving cyclosporin, a treatment as an immunosuppressive agent and we think that the isolated lung involvement clinic can be explained with these data in the literature.

In conclusion, opportunistic fungal infections such as C. neoformans should also be considered as a cause of fever in patients with solid organ transplants. It should be noted that these infections may result with high mortality without early diagnosis and appropriate treatment.

© 2021 Sevgin Taner. This is an open-access article distributed under the terms of the Creative Commons Attribution License, which permits unrestricted use, distribution, and reproduction in any medium, provided the original author and source are credited. Hosting by Science Repository. All rights reserved.
DOI: 10.31487/j.TCR.2020.01.08