Primary skin and soft tissue reconstruction of large defects around the knee may be a challenge for the plastic surgeon. Fasciocutaneous flaps play an essential role in achieving functional and aesthetic restoration. We present the surgical reconstruction of an extensive 3rd degree burn injury with knee joint capsule and ligaments involvement in a 51-year-old patient. Devitalized structures were firstly debrided and a supercharged reverse anterolateral thigh (RALT) flap was used to cover the resultant tissue defect. The ALT fascia was employed to reconstruct the damaged joint capsule in order to restore articular function. The supercharged RALT flap has a greater blood supply compared with standard flaps and enables us to use larger flaps to reconstruct extensive knee and proximal leg tissue defects.

Free tissue transfer is an optimal option to treat deep burns where bones, tendons or vessels are exposed. Its use in acute burn reconstruction has significantly increased lately [1-3]. Severe burns with knee joint damage and noble structures exposure are always challenging for the surgeon. The main goal is to find suitable techniques to achieve functional restoration with the lowest donor site morbidity [4-6]. The reverse-flow anterolateral thigh (RALT) flap might be an optimal option for treating full-thickness burns of the knee and proximal leg area [7]. Although RALT flap has been described as a secure and effective technique, venous congestion and, consequently, partial flap necrosis is a common problem [6, 8, 9]. So as to avoid this issue, supercharging techniques have been described [5, 6, 10, 11]. Moreover, RALT flap allows the use of the fascia to reconstruct damaged articular capsule and tendon structures [6]. The purpose of this article is to describe our approach to functional knee joint reconstruction in a full-thickness thermal burn using a supercharged RALT flap. 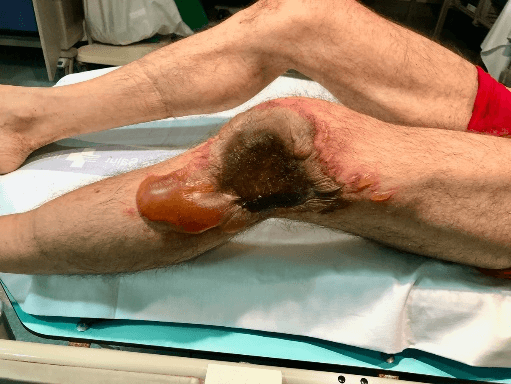 Figure 1: Third degree burn located on the anterolateral part of the knee.

A 51-year-old man was referred to our Burn Unit in November 2019 because of a 3rd degree burn around the left knee caused by prolonged contact with an electric stove during deep sedation when he was under the influence of hypnotic drugs. The patient was ex-cocaine user, smoker, and he suffered from sciatic pain and insomnia. Physical examination findings consisted in a 3rd degree burn located on the anterolateral area of the left knee, which also affected the distal part of the thigh and the proximal part of the leg (Figure 1) for a 3% of total body surface area (TBSA).

At first, our team proceeded with blister and devitalized tissue removal, wound coverage with topical antibiotic ointment (Silver Sulfadiazine) and hospitalization. On the fourth day after admission we performed the first surgery in which we debrided necrotic tissue until the joint capsule and started negative pressure wound therapy (NPWT) provided by VAC system (-120mmHg, continuous mode). In the following days, devitalized area progressed and also involved the articular capsule and the lateral ligament apparatus of the knee (Figure 2). 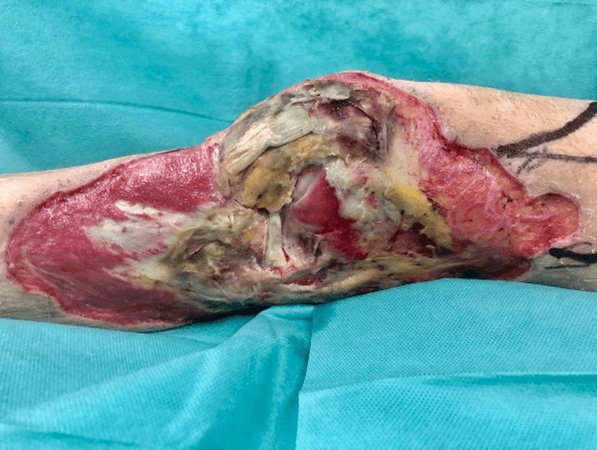 All together caused the exposure of the lateral meniscus with serous articular fluid drainage; we took samples for microbiological culture. During hospital admission we consulted with Orthopedics and Traumatology team because the patient complained about the difficulty in flexing the knee, and they concluded that the joint instability was caused by capsule damage, that could be solved with capsule reconstruction and a stable wound coverage. Although lateral and extensor ligament apparatus were partially affected, its function was preserved.

On the 18th day of admission, the patient underwent surgical debridement again. The resultant tissue defect measured 18 x 28 cm; knee lateral and extensor ligament components were partially preserved after the debridement. We took four samples for microbiological analysis and we irrigated profusely the lesion with saline. We decided to use a RALT flap to cover the defect (Figure 3). 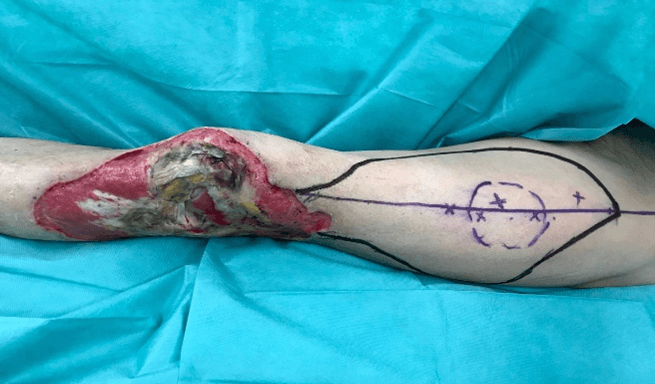 The flap was lifted based on three perforating arteries and distally pedicled. The large size of the flap (19x29cm), led us to supercharge it by anastomosing the proximal end of the lateral circumflex femoral artery with the anterior tibial vessels at the medial third of the tibia (9/0 nylon for one artery and 2 and 2.5 mm Coupler for two veins). We used the fascia to reconstruct the joint capsule and meshed skin grafts from the contralateral thigh to cover the donor site (Figures 4A, 4B & 4C). 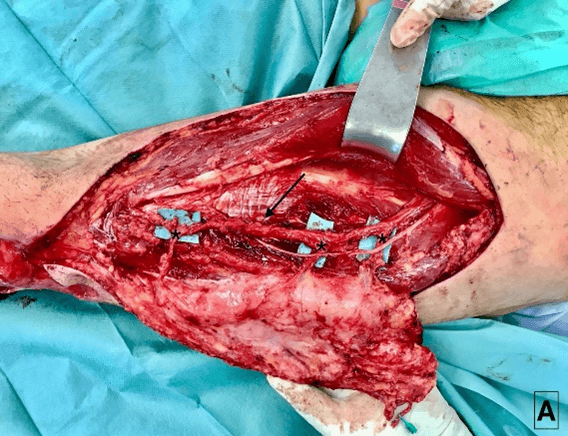 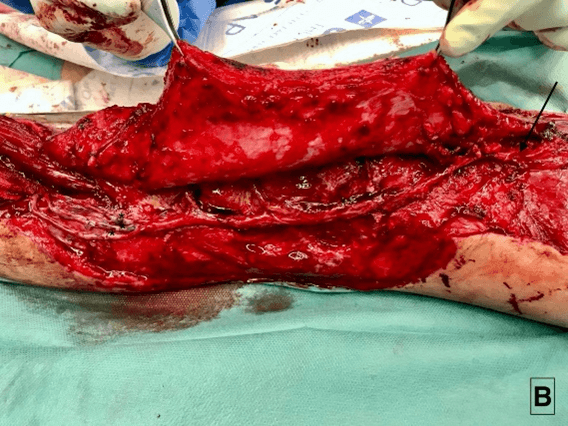 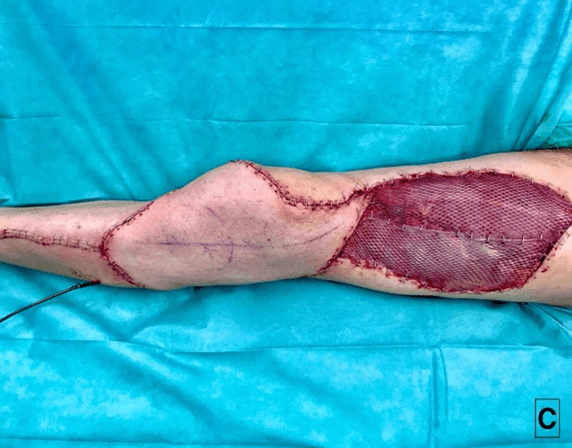 After the surgery, the patient was treated with 100mg/24h acetylsalicylic acid during 1 month and antithrombotic therapy with subcutaneous enoxaparin 40mg/24h. As antibiotic treatment, Piperacillin-tazobactam 4g/8h was administered before microbiological results, but we changed to teicoplanin 600mg/24h when we knew that Staphylococcus epidermidis was isolated in the samples. The antibiogram results, which were received 2 days after the reconstruction, allowed us to change teicoplanin for cefazolin 2g/8h. After completing 7 days of intravenous treatment we replaced cefazolin by oral levofloxacin 750mg/24h to complete 4 weeks. Postoperatively, lower limb rested in elevation and knee flexion was not allowed, flap viability was checked every two hours during the first 24h and four times a day during the next 3 days. Two weeks later, the patient initiated lower limb descent and progressive ambulation. He was discharged from hospital three weeks after surgical reconstruction with outpatient control by Plastic Surgery and Rehabilitation Departments. Furthermore, the patient followed an intensive and specialized postoperative physiotherapy program.

A month and a half after the intervention, flap coverage was stable, scars healed but global knee swelling was observed without flogotic signs. The patient was able to walk progressively with crutches but presents some limitation for the active knee flexion. 6 months after the intervention the aesthetic and functional results were satisfying and swelling was solved. Once the intensive rehabilitation program was completed the patient was able to achieve full autonomous ambulation and active 90º knee flexion (Figures 5A & 5B).

Microsurgical free tissue transfer has substantially improved functional and aesthetic outcomes in burn injured patients. This technique could sometimes be the only option to avoid limb amputation. When deciding the best reconstructive option, it is important to consider the tissue defect size, location, exposed structures, movement requirements, and even the skin colour adjacent to the defect. Furthermore, it is also important to analyze the required vascular pedicle length, the donor site morbidity and patient’s position during the surgery [1, 2].

A functional limb with proper soft tissue coverage is the main goal in knee reconstruction. However, the use of fasciocutaneous or muscle local flaps might be unavailable, insufficient or too bulky when we face extensive soft tissue defects [4, 5, 10, 11]. RALT flap provides a long vascular pedicle, large skin surface and low donor site morbidity [5, 11]. In addition, RALT flap is usually thin and flexible which makes it ideal for covering mobile structures and enables us to rebuild joint capsule and patellar tendon using fascia.

Although ALT flap has been popularized in recent years, there are few papers about RALT flap [9]. Zhang et al. described the reverse blood supply based on the anastomosis of the lateral circumflex femoral artery with the lateral superior genicular artery [12]. We agree with Demirseren et al. that the pivot point location is important when lifting a RALT flap [5]. This point is determined between 3 and 10 cm proximal to the superior lateral angle of the patella. It is also advisable to include muscular cuffs around the vascular pedicle in order to decrease compression and minimize vasospasm risk [5, 10, 11]. Pan et al. concluded that the arterial flow and the venous drainage capacity are enough for flap survival [5, 11, 13]. However, other authors reported a high incidence of venous congestion due to the reverse blood flow and resistance of the venous valves, that could lead to distal flap necrosis and partial flap loss [6, 8, 9]. Gravvanis et al. proposed venous supercharge for large-sized RALT flaps as a routine method to avoid complications derived from venous drainage [6]. In our case, we decide to supercharge the flap with anterior tibial vessels due to the large flap volume, in order to ensure an adequate flap irrigation and venous drainage.

We believe that arterial and venous supercharged RALT flaps could provide sizable and reliable coverage to the knee and the proximal third of the leg with low donor site morbidity. In our case, we obtained an optimal skin coverage. Furthermore, the fascial component of ALT flap allows the reconstruction of tendons or the joint capsule, as in our case, achieving knee stability, avoiding synovial fluid loss and providing sliding tissue to be in contact with articular cartilage [14]. The patient presented great improvement in the knee motion range after the specialized physiotherapy, so that we strongly recommend the implementation of intensive physiotherapy programs in such cases.

In conclusion fasciocutaneous flaps play a fundamental role in full-thickness burn reconstruction. In our opinion, supercharged RALT flap offers a safe and effective option to reconstruct sizable tissue defects around the knee obtaining satisfying aesthetic and functional results. It is advisable to use supercharging techniques when large flaps are needed. Fascia is a good option to restore tendons, ligaments and capsular structures.

Not a requirement for case reports in our institution.

The patient consented to the procedure and the use of the images and photographs in this paper.

© 2019 Jorge Aguilera-Sáez. This is an open-access article distributed under the terms of the Creative Commons Attribution License, which permits unrestricted use, distribution, and reproduction in any medium, provided the original author and source are credited. Hosting by Science Repository. All rights reserved.
DOI: 10.31487/j.SCR.2020.10.05

Figure 1: Third degree burn located on the anterolateral part of the knee.