Complications Following Pre-Operative Radiotherapy and Vascular Reconstruction to the Groin in Sarcoma Patients: A Series of Cases

Sarcomas are a heterogeneous group of neoplasms of mesenchymal origin with strong metastatic potential. They constitute around 1% of malignant tumors and represent a significant diagnostic and therapeutic challenge [1]. Limb sarcomas have been historically treated via amputation. However, advances in surgical technique and combination therapies including chemotherapy and radiotherapy (RT) has allowed for limb-sparing surgery to become the mainstay of management [2]. Surgery alone is often used in small (<5cm), low-grade and/or superficial sarcomas in suitable cases where wide margins can be achieved. Otherwise, adjuvant RT may be useful, with good evidence to suggest improving local control rates with technological and biological advances over recent decades [3]. However, RT may damage adjacent healthy cells which can lead to various acute and late post-operative complications. Likelihood of complications varies with tumor location and RT dose. The pre-operative RT dose used in soft-tissue sarcoma of the extremities is 50 Gray (Gy) whereas 60-66 Gy is used post-operatively [4].

Management of soft tissue sarcoma of the groin is particularly challenging. Tumors may be intertwined with various structures such as the femoral vessels, femoral nerve, anterior abdominal wall, and anterior urethra [5]. Flap reconstruction is often required for re-establishment of abdominal wall integrity, and vessel damage may necessitate grafting. Although the addition of targeted pre-operative RT improves survival rates, this comes with the risk of various major wound complications [6]. Complications are more common in sarcomas of the lower extremity compared to the upper extremity and are particularly commoner in groin or thigh tumors [7, 8]. We present the cases of 3 patients with groin sarcomas who were treated with RT prior to resection and subsequently developed major wound complications. We discuss the role of pre-operative RT and vascular reconstruction in groin sarcoma, including the benefits, drawbacks, and potential for lowering the therapeutic dose or omitting RT altogether.

A 36-year-old female presented with a proximal left groin lump of a few weeks’ duration. Biopsy and histological analysis revealed a 9x8x6cm myxoid liposarcoma. She underwent pre-operative RT over a 5-week period, after which she had radical excision and vascular reconstruction to the left femoral artery. After the operation, our patient developed a haematoma at the surgical site, and the vascular graft was found to be kinked. She required a further operation the following day, and the graft was re-anastomosed, utilizing the great saphenous vein. However, the foot appeared deeply ischaemic, thereby necessitating a fasciotomy. Further graft kinking and resultant haematoma a few days later required additional surgery. Haematomas continued to develop over the coming weeks, each time obligating further procedures. The graft was eventually found to be thrombosed, and after further revision, left abdominis rectus flap reconstruction to the groin was required to protect the graft from exposure (Figure 1). The distal limb was satisfactorily vascularized at this stage. 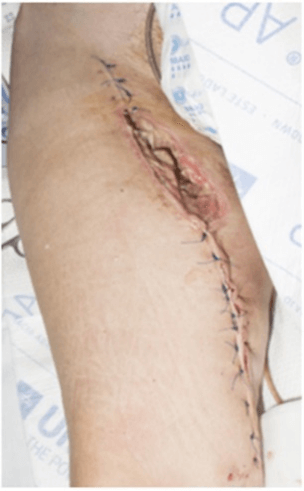 Figure 1: Wound 2 days post left rectus abdominis flap reconstruction to the left groin, mesh repair, and debridement of necrotic tissue. The patient would return to the theatre 8 days later for exploration due to repeated bleeding.

However, one week later, our patient developed further bleeding from the groin. Upon exploration, a large haematoma was found, and the graft had no palpable pulsation, although pulsation could be felt proximal to the graft. The foot was ischaemic and necrotic, and an angiogram revealed no in-line flow to the foot. Lack of available remaining veins that could be used for further grafting meant that a below knee amputation was inevitable. Our patient required a total of 8 operations. She was discharged from hospital once stable and the wound showed signs of healing (Figure 2). She remains well with nil concerns after 6 months. 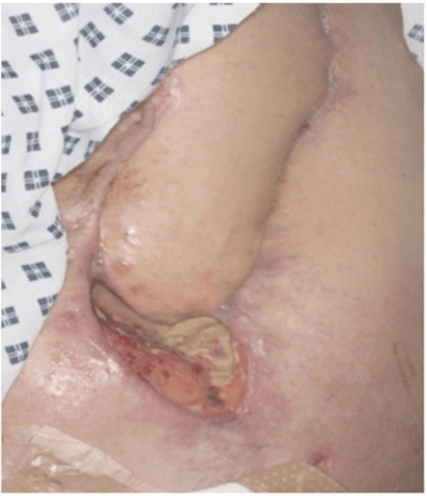 A 63-year-old male presented with a right groin lump. Sarcoma was initially queried following ultrasound imaging, but histology later revealed the diagnosis of pilomatrixoma. Following RT, he underwent radical excision. The tumor was found to be intertwined with the femoral vessels and femoral nerve. The femoral artery adventitia required delicate dissection from peritumoral structures, and the lateral branch of the femoral artery and femoral vein were sacrificed. Although removal of the tumor was successful, a large 20x15cm wound remained which was not amenable to closure. A further operation 2 weeks later was required for removal of necrotic and infected tissue, and exposed muscle was mobilized to cover the femoral artery. However, this muscle was removed a few days later due to gross necrosis, thereby leaving the femoral artery skeletonized. Vascular bypass was performed 2 days later (Figure 3), and the wound looked visibly clean. 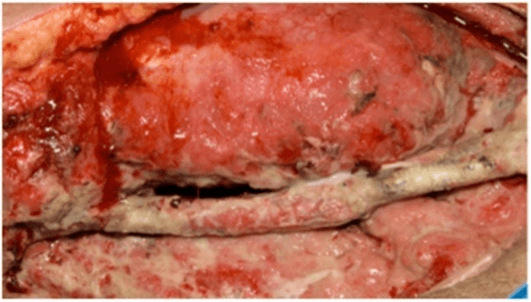 However, around 1 week later, an emergency operation for arrest of haemorrhage secondary to superficial femoral artery (SFA) bleeding was required. Long saphenous vein patch and sartorius flap were attempted, and split skin graft was harvested from the lateral aspect of the right calf. However, further episodes of bleeding necessitated SFA and external iliac artery ligation, and eventually SFA excision due to necrosis. However, above knee amputation was ultimately needed due to an unsalvageable acutely ischaemic limb. Our patient underwent a total of 8 operations. He remains well almost 7 years after initial presentation.

A 62-year-old female presented with right groin epithelioid angiosarcoma. Following RT, she underwent sarcoma excision with vascular reconstruction and groin dissection. During the first operation, the tumor was found to be associated with a large lymph node and a neurovascular bundle. As such, an alternative approach was taken, involving incision from the groin down to the knee. The neurovascular bundle was removed, but the vastus medialis, vastus intermedius, rectus femoris, abductor magnus, and segments of the sartorius and pectineus were sacrificed. The SFA was divided at the groin just proximal to the profunda femoris artery and distally at the adductor hiatus prior to reconstruction. Although the tumor had been removed successfully and the graft was fully functional, this came at the cost of permanent loss of quadricep control.

Approximately 1 month later, the wound dehisced, thereby exposing the graft (Figure 4). The area was found to be necrotic, and wound swabs grew Extended-spectrum beta-lactamase-producing bacteria and Pseudomonas. All necrotic tissue was debrided, and our patient was discharged thereafter. However, she re-presented around 1 month later with further wound necrosis and infection. Washout and debridement were undertaken, and Integra was used for dermal regeneration. Our patient was discharged on long-term antibiotics and vacuum-assisted closure (VAC) therapy. Our patient underwent a total of 3 operations. At 5-month follow-up, the wound had largely healed. However, our patient developed pulmonary metastasis and passed away around 6 months later.

Figure 4: A) Right groin wound before debridement. B) Wound post-debridement for removal of necrotic and infected tissue. Our patient was discharged soon after on long-term antibiotics and VAC therapy.

Advances in multi-modality therapies over recent decades have allowed for limb-sparing surgery to become a common practice [2]. This includes the application of RT and chemotherapy. RT is given either pre- or post-operatively, at doses of 50 Gy or 60-66 Gy in 1.8-2 Gy fractions over 5 or 6-7 weeks, respectively [9]. Following RT, the resection can proceed if skin surrounding the tumor has healed well.

Sarcoma wound complications are known to be most prevalent in the lower extremity, particularly the groin and proximal thigh [7, 8]. Several studies have reported that RT-related wound complications are also more common in the lower extremity, especially in the proximal region [4, 10, 11]. Surgical disruption to the lymphatic vessels in the adductor compartment in particular is a major risk due to resultant increased likelihood of infection [4]. Tumor involvement with the surrounding anatomical structures, such as the femoral vessels, femoral nerve, anterior abdominal wall, and anterior urethra is also a contributing factor to risk of complications [5]. Vascular reconstruction is frequently required to maintain circulation to the distal limb, and flap reconstruction for abdominal wall integrity. However, this likely poses further heightened risk of major wound complications.

We describe a series of 3 patients all of whom underwent pre-operative RT and tumor resection of groin sarcoma with vascular reconstruction. All required multiple further operations for major wound complications, including infection, dehiscence, and haemorrhage. These complications were likely secondary to the combination of pre-operative RT and vascular reconstruction and may have not occurred if either was excluded. Two patients required an above and below knee amputation, and one developed pulmonary metastasis and passed away.

Although known for its positive long-term outcomes, pre-operative RT is recognized for its acute complications which may necessitate further operations [4]. Analysis of the risk-benefit ratio should therefore be carefully considered by an expert multidisciplinary team. Potential options include omitting RT or lowering the dose. However, RT omission can only be as per precise criteria, including superficial/low-grade lesions of <5cm [4]. Lowering the dose is also not a straightforward option, as sarcomas are known to be relatively resistant to RT. Furthermore, there is evidence to suggest that different sarcoma subtypes vary in their responses to various chemotherapy agents [12]. The possibility therefore exists that different sarcoma subtypes vary in their inherent radiosensitivity. Some subtypes may therefore require higher or lower doses than is delivered. The pre-operative RT dose of 50 Gy is also sometimes used as a palliative dose. Lowering this further would therefore question its efficacy [12].

Pre-operative RT at a dose of 50 Gy and vascular reconstruction in groin sarcoma patients may result in major wound complications, thereby putting the limb and/or life at risk. An expert multidisciplinary team should therefore carefully evaluate the dose and need for RT prior to resection of groin sarcoma. Post-operative RT may be a suitable alternative in these cases.

We would like to thank all staff members involved in the patient’s care.

OE drafted the manuscript. GB and UA obtained and read through patient notes and summarised the relevant information. DM and AP participated in the treatment of these patients. All authors approved the final version of the manuscript.

The privacy of the patients was considered, and the manuscript does not include any identifying information.

Verbal informed consent was obtained from patients and/or relatives for the publication of this report and accompanying images.

© 2021 Ashok S Paul. This is an open-access article distributed under the terms of the Creative Commons Attribution License, which permits unrestricted use, distribution, and reproduction in any medium, provided the original author and source are credited. Hosting by Science Repository. All rights reserved.
DOI: 10.31487/j.SCR.2020.12.05

Figure 1: Wound 2 days post left rectus abdominis flap reconstruction to the left groin, mesh repair, and debridement of necrotic tissue. The patient would return to the theatre 8 days later for exploration due to repeated bleeding.

Figure 4: A) Right groin wound before debridement. B) Wound post-debridement for removal of necrotic and infected tissue. Our patient was discharged soon after on long-term antibiotics and VAC therapy.